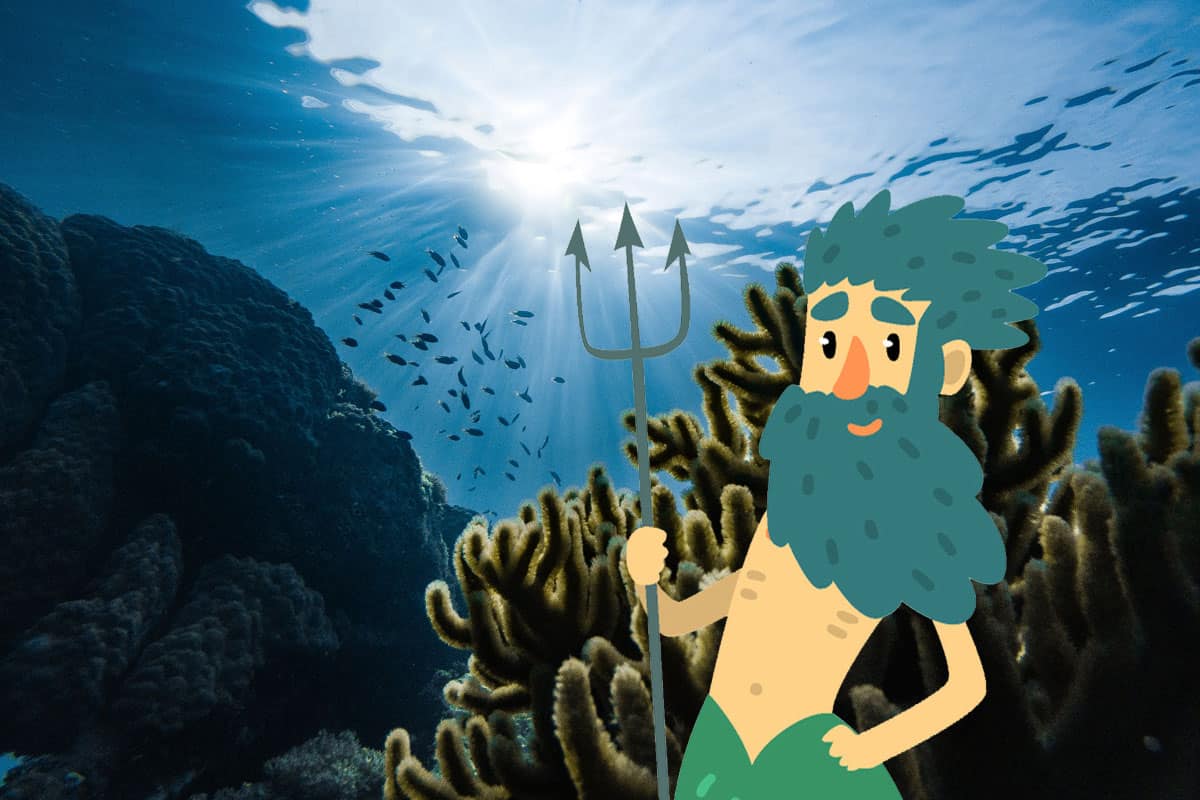 Poseidon was the brother of Zeus and a terribly important character in the Greek pantheon of gods. He was integral in the overthrow of Cronus, the titan god, and he would play a important part in many of the subsequent Greek myths.

He was quite the temperamental character and one of the gods to be wary of. So, lets take a look the realms, powers and personality of this god.

The Birth of Poseidon

Poseidon was known to be the son of Rhea and Cronus. When he was born, his father, Cronus had already been told of a prophecy where one of his children would end up taking his throne. In a state of fear, Cronus ate all of his children (except for Zeus). Poseidon was among those children. When his brother, Zeus, was old enough to return and face Cronus, Zeus made his father throw up his brothers and sisters.

This then led to a ten-year war where Zeus and his siblings fought against his father. Eventually, they won the war, and Cronus was dethroned. Zeus, Poseidon, and their brother Hades all drew lots on who would rule which part of the world. Zeus ended up being king of the gods and ruler of the sky. Poseidon was ruler of the sea. And, Hades was the ruler of the Underworld.

The birth of Poseidon and his siblings eventually led to the divvying up of the world. This is significant because each god plays their individual role as per their realm.

King Minos promised Poseidon he would make a sacrifice of a bull to him, but he never followed through on this promise. Poseidon, being a somewhat vengeful god, didn’t take this broken promise well. He decided to punish King Minos through his wife, Pasiphae. Poseidon caused Pasiphae to become quite taken with the bull that was supposed to be the sacrifice.

She ended up becoming pregnant and gave birth to the Minotaur – a half-human, half-bull creature. King Minos was beyond himself in fury when he found out about the Minotaur. He decided to create a labyrinth for the Minotaur to stay in.

This myth shows the vengeful side of Poseidon. He was known to have a temper and he longed to be in control of things, so being slighted would not be something he would handle well.

The love of Poseidon and Amphitrite

Poseidon ended up falling in love with the daughter of Oceanus. One day he saw her dancing and was so taken with her beauty, he instantly fell in love. She did not at first reciprocate this love, as she was afraid of Poseidon’s intense courting. She ended up hiding away deep in the sea. Poseidon decided he needed to change his tactics to win her love.

He started leaving her beautiful gifts but she wasn’t interested in any of them. He decided he needed to do something entirely different. He created a talking and dancing fish which he called a dolphin. Because the dolphin could speak, it pleaded Poseidon’s case to Amphitrite who was so taken with the dolphin, she had no choice but to accept and return Poseidon’s love.

She ended up marrying him and becoming queen of the sea and having many children with Poseidon. This myth tells the creation of the dolphin and shows the kind side of Poseidon.

Poseidon was the father a Cyclops named Polyphemus. The Greek adventurer Odysseus happened to meet Polyphemus when he and his men landed on the island of the Cyclopes. They had found Polyphemus’ cave and decided to see if they could find any supplies there. When Polyphemus came home after shepherding his fields, he found Odysseus and his men.

He sealed them in the cave by rolling a large rock in front of the door. He then went on to devour Odysseus’ men. Odysseus knew he had to rescue his men somehow, so he devised the plan to get Polyphemus drunk. When Polyphemus asked what Odysseus’ name was, Odysseus, told him his name was nobody. Once Polyphemus had passed out from drinking too much sweet wine, Odysseus blinded him. He and his remaining men then hid under sheep and waited for Polyphemus to wake up.

When he did wake, he was furious about being blind and rolled the stone out of the way to let his sheep out into the field. Odysseus and his men ended up escaping, and when Polyphemus asked for help from the other Cyclopes on the island, they were unwilling to give it as Polyphemus told them ”nobody” hurt him. Polyphemus instead prayed to his father, Poseidon, who ended causing horrible storms for Odysseus that wrecked his ships and drowned his men.

This myth shows the anger Poseidon can have. It also is the reason Odysseus’ trip home lasted 10 years longer than planned.

Erysicthon was a king of Thessaly. He loved using his axe, and one day made the mistake of cutting down some trees in the drove of the goddess, Demeter. Demeter was furious so she called her servant, Famine, to come and aide her. Famine came and punished Erysicthon by making him so hungry he would eat anything and everything he could find.

He eventually ate all the crops his kingdom could provide, so he took his daughter and they moved to another land. But, they didn’t have any money and had no means to buy any food, so he sold his daughter. The princess had no choice but to oblige. However, she prayed to Poseidon to grant her the ability to change forms. Poseidon gave her the gift of transforming herself. She ended up changing forms and escaping from her buyer.

When she returned to her father, he sold her again and she ended up escaping…again. Eventually, she met a young man who was quite taken with her. He was able to change his form as well. She and the man ended up staying together and she no longer returned to her father. Her father tried to look for her because he was starving and still had no money, but he couldn’t find her.

He ended up eating himself completely. Demeter was satisfied with this punishment and ended up watching over the king’s daughter by making sure her crops prospered every year. This myth shows the kindness Poseidon could possess from time to time. He took pity on the girl and gave her a gift that changed her life.

Euphemus was a son of Poseidon. He had the ability to run over water without ever touching it. He was also part of the famous group of Argonauts, who were led by Jason. One day the Argonaut’s ship, the Argo, got caught in a horrible storm. The storm was so bad it ended up stranding their ship in the middle of the Libyan desert.

As they were stuck in the sand and thought they may all die from the heat, Euphemus prayed to his father and asked for help. Poseidon answered this prayer by sending another son, Triton, to rescue his half-brother. Triton blew on his horn and a channel appeared.

This channel led to the sea and was large enough for the Argo to sail on. Triton also gave Euphemus a mound of earth. He told him to throw it into the sea and it would create a habitat for all of Euphemus’ descendants. Euphemus did just that and created the island, Calliste.

This myth is the creation of the island, Calliste. Euphemus’ descendants who lived there were the ones who went on to colonise Thera. Thera eventually became the capital of Atlantis.

Both Poseidon and the god, Apollo, angered Zeus. They were punished with the task of helping King Laomedon of Troy. Poseidon was responsible for building the walls of Troy, while Apollo was tasked with tending the king’s sheep. Once the gods completed the tasks, the king wouldn’t pay them.

Apollo and Poseidon retaliated by sending a giant sea monster to attack Troy. The only way the sea monster would stop attacking was if King Laomedon sacrificed his daughter Hesione. So, Hesione was tied to a rock as a sacrifice.

This myth shows the vengeful side of Apollo, Poseidon, and Heracles.

Poseidon was an interesting if temperamental god. His powers dwarfed many of the other Greek gods. In his case, he didn’t really listen much to the phrase – with great power comes great responsibility. He would flood the lands at will and send terrible sea monsters upon some minor insult. What a nutter!

Thanks for taking the time to read our summary of Poseidon and the myths. Feel from to comment below!

1 thought on “7 Poseidon Myths and Stories”