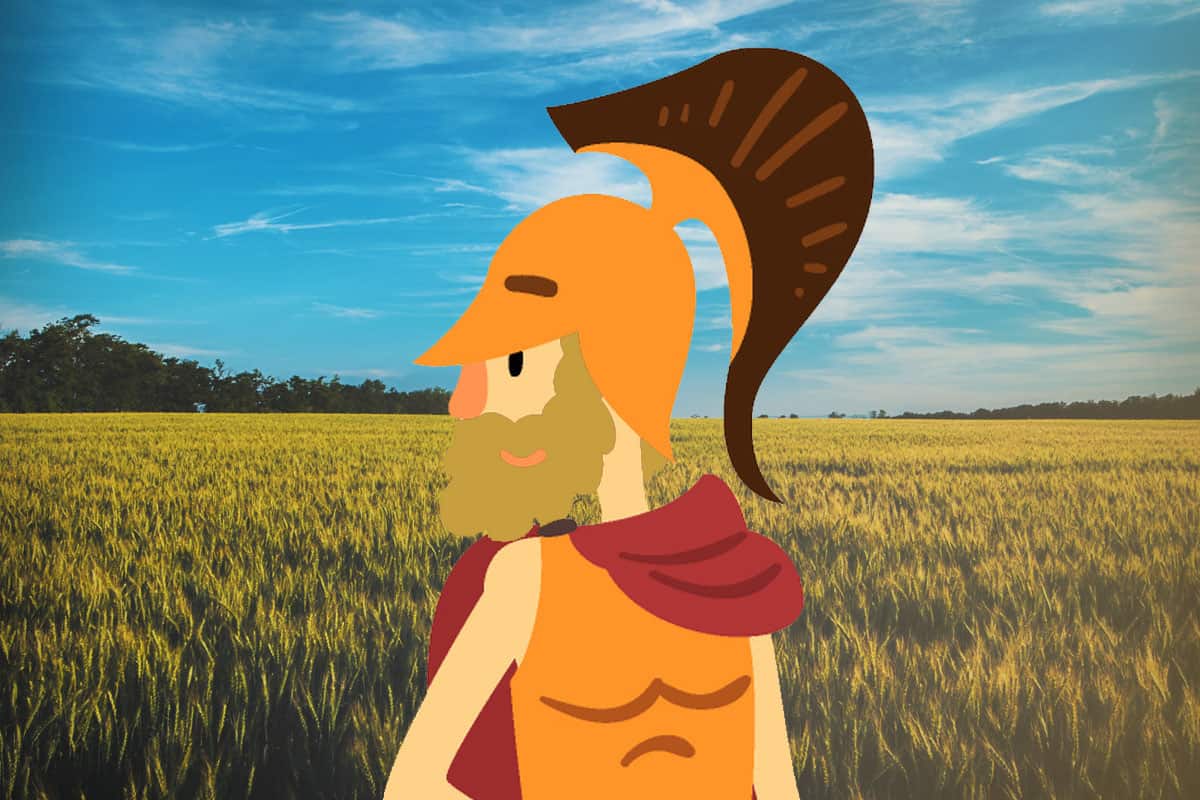 The Greek hero Achilles, son of Thetis and Peleus, was the Greek’s greatest warrior and a hero of the Trojan War. He’s known the killer of Hector, and the bearer of the famous heel which was his one weakness, as the friend and probable lover of Patroclus.

His story is detailed in The Iliad, of which he is the central character, and The Odyssey, where he is a friend, rival, and battle companion of its hero, Odysseus. There are many stories across these volumes detailing the life, glories, and trials of Achilles. These are just some of the more significant tales involved.

Achilles’s mother was a nereid nymph, Thetis. She was an extremely beautiful woman, beloved both by Zeus and Poseidon, who competed over her hand in marriage. The Titan Prometheus warned Zeus that Thetis would bear a son greater than his father. The two gods cancelled their courtships and married Thetis off to King Peleus instead. From their union, Achilles was born.

Thetis loved her son and from the moment he was born she wished to protect him. She took Achilles to the River Styx and dipped the baby in the water. Being submerged in the Styx would make him immortal. However, it left one vulnerable spot – his heel, which her fingers held.

In some stories, Thetis is not quite as loving. Ptolemy has Thetis secretly burn any children she birthed from her marriage. Peleus discovered her doing so with Achilles and pulled the baby from the fire by his heel. In another version, Thetis douses the baby in ambrosia and throws him in a fire to burn away his mortal body. Peleus puts a stop to it and Thetis leaves both father and son.

In any case, many versions of the story say that every part of Achilles (except the heel or tendon) were afterward invulnerable. Some sources say this means he could not bleed or be wounded. In the Iliad, however, Achilles can bleed from his wounds.

Peleus entrusted his son to the centaur, Chiron, son of the Titan Kronos and the wisest of his kind. Chiron was a master to many of the great heroes. He took Achilles in and acted as his foster father for some time before returning to his parents.

Thetis was protective of her son, and when word came that the Greeks and Trojan would be at war, she (or in some version Peleus) took the boy and hid him amongst the court of King Lycomedes of Skyros. Here, Achilles was disguised as a girl, Pyrrha, and lived amongst Lycomedes’s daughters. One of these daughters, Deidamia, became his friend and confidante. He fell in love with her and eventually the two made love.

Deidamia became pregnant with twins. She hid knowledge of their parenthood from her father, not wanting to get Achilles into trouble. They had two sons, Neoptolemus (also called Pyrrhus) and Oneiros. Thetis took Pyrrhus to raise as her own, and Oneiros was later accidentally killed by Orestes.

Eventually, Achilles left Skyros after being discovered by Odysseus. He made a promise to return to Deidamia, but was fated to die in the Trojan War.

Odysseus went to Skyros with the aim of recruiting Achilles for the war, but it was impossible for him to tell which of the women was Achilles in disguise. Clever Odysseus came up with a plan. One day, he ran into the room where the women of the court were resting and cried out that Skyros was under attack. While the women run and hid, Achilles reached for the nearest weapon and prepared to fight.

Odysseus realized who he was and beckoned for him to join the war effort. Achilles was put in charge of a battalion of fifty ships which each carried fifty Myrmidon soldiers. He assigned five men – Menesthius, Eudorus, Peisander, Phoenix, and Alcimedon – as his generals. Each took responsibility for 500 of the men, with Achilles as the overall commander.

6. The Death of Troilus

Troilus was a lover of Achilles and the youngest son of Priam of Troy. When Achilles met him after building a name for himself sacking and conquering cities, he and Troilus were instantly connected. Despite their youth, both men were prodigies in the field of battle.

However, either during a battle or during an over-enthusiastic bout of lovemaking, Achilles killed Troilus. According to prophecies, this turned the tide of the war before anyone knew about it; had Troilus lived to full maturity, Troy would have been invincible.

7. The Abduction of Chryseis and the Plague of Apollo

Later in the war, Achilles had captured and fallen in love with a foreign queen, Briseis, daughter of Briseus. While this was going on, King Agamemnon had captured Chryseis, the daughter of Chryses, and made her his slave and lover. Chryses was a priest of Apollo and appealed to the god for help, and Apollo – who sided with Troy in the war – sent a plague amongst the Greeks.

The prophet Calchas asked for Achilles’s protection in exchange for locating the source of the plague and ending it. Achilles agreed, and Calchas told him to ensure that Chryseis was returned to her father. Achilles went to Agamemnon with this information. Agamemnon agreed – but he took Briseis as his slave instead.

Furious about the theft of his property and lover, with his mother Thetis in his ear, Achilles withdrew from battle. He refused to lead the Greek forces or fight alongside them, and even prayed to Zeus to grant strength to the Trojans to help Achilles regain his honor.

Nestor, the wise king of Pelos, realized that the Trojans were gaining an upper hand in the war thanks to how Agamemnon had offended Achilles. He went to Agamemnon and explained this, telling him how only by appeasing the warrior could the war be won.

Agamemnon heeded Nestor’s words. He sent Odysseus, Phoenix, and Ajax to entreat Achilles to return to battle, promising to return Briseis and several other gifts unto him. Achilles, however, was filled with wrath and wounded pride. He told his fellow Greeks to simply sail home as he planned to do as well.

9. The Death of Patroclus

Patroclus was Achilles’s life long best friend and probably lover. The two played together as children and, when Achilles went to war, Patroclus went with him. When Achilles refused to fight, Patroclus stepped up to lead the Greeks in his stead.

The Trojans had captured the beaches and threatened to entirely exterminate the Greeks. Through Patroclus’s leadership, the Greeks were able to repel the Trojans. However, Hector of Troy killed Patroclus before the end of the battle.

Achilles learned of Patroclus’s death and was consumed by grief and rage. His mother had Hephaestus, god of the forge, create Achilles new armor. Achilles then broke his vow not to fight and returned to battle, slaughtering all in his path. He aimed to find and destroy Hector to get revenge for Patroclus’s death.

Later, Patroclus would appear to Achilles in a dream. After the death of Hector, Achilles held funeral games in Patroclus’s honor.

The wrath of Achilles was so great that it was a threat to the plans of the gods themselves. The river god Scamander tried to drown Achilles for clogging his waters with bodies, but Hera and Hephaestus intervened, stopping him.

Meanwhile, Zeus was forced to intervene once again in the war by sending gods to restrain the hero. This was so that Achilles would not single-handedly destroy Troy before the day that the Morai, or the three Fates, had predicted its fall.

When Achilles finally found Hector, he chased the man around the city walls of Troy three times. Athena appeared as Hector’s brother and told him to stop running, allowing Achilles to catch up. Hector accepted his fate and chose not to beg for life, but instead pleaded that Achilles not dishonor his body.

However, Achilles’s rage was too great. After Hector died, he tied the prince’s heels to his chariot and dragged the dead body around the city walls of Troy three times.

Eventually, with the help of Hermes, Priam pleaded with Achilles for the return of his son’s body. Achilles realized he must relent, and allowed a nine-day truce of the war for Priam to recover Hector and bring him back to Troy.

Penthesilia was queen of the Amazons, a race of warrior women who were the daughters of the war god, Ares. Ares fought on the side of Troy, and so sent his daughter to King Priam after the funeral of Hector. Priam sent Penthesilia to kill Achilles.

At first, Achilles was distracted by Penthesilia’s beauty and did not fight to his full capacity. However, once he realized this, he redoubled his efforts and eventually slayed the Amazon.

Antilochus was a son of Nestor and he replaced Patroclus as Achilles’s closest companion. The son of Eos, goddess of the dawn, and the king of Ethiopia was named Memnon. Memnon killed Antilochus in battle. Achilles once again went into a rage, killing Memnon on the battlefield. Eos refused to let the sun rise again until Zeus promised her many boons.

14. The death of Achilles

Achilles’s death has many versions, but in most interpretations, it came at the hands of Paris, the brother of Hector and the man who started the war by capturing Helen of Troy in the first place.

Achilles was set to marry Paris’s sister Polyxena, a match encouraged by a tired Priam who simply wanted an end to the war. Had the marriage gone ahead, the Greeks and Trojans alike would have lain down their arms. However, Paris knew that he would have to return Helen if the marriage went ahead, and so shot a magical arrow guided by the god Apollo directly into Achilles’s heel.

Achilles died and his body was cremated. His ashes and bones were mixed with Patroclus’s in the same urn, and the two heroes were laid to rest together.

After his death, the great armor forged by Hephaestus for Achilles became a matter of conflict between his men. Both his friend and rival Odysseus and his battle companion Ajax the Greater claimed they had the right to wear it. Eventually, they made a mock-court with captured Trojans as their jury. They both took their turns presenting their cases to the jury, the at the end allowed the prisoners to decide.

Some debate later, Odysseus was chosen as the rightful bearer of the anger. This made Ajax furious, and he cursed Odysseus’s name. The curse angered Athena, who was a patron of both Achilles and Odysseus, and she cursed Ajax in return. Ajax was driven mad and started killing his companions – except, rather than his actual companions, he killed sheep.

When the madness faded, Ajax realize what he had done and killed himself from shame. Odysseus donned the armor for a while, then traveled to Skyros, where he found Neoptolemus/Pyrrhus, Achilles’s son. Neoptolemus wished to fight in the war, and so Odysseus gifted him his father’s armor and took him back to battle.

When Odysseus later descended into the Underworld, he came across several shades, one of whom was that of Achilles. Achilles lived in Elysium, the highest place of honor for the dead where he resided in eternal paradise. There he lived with either Patroclus or Medea, who in some versions of his story was one of his wives.

Achilles advised Odysseus that it was better to be a slave than a king. He asked after Neoptolemus, and was pleased to hear of his son’s victories in battle. He wished Odysseus the best of luck in the trials ahead before returning to his eternal peace.