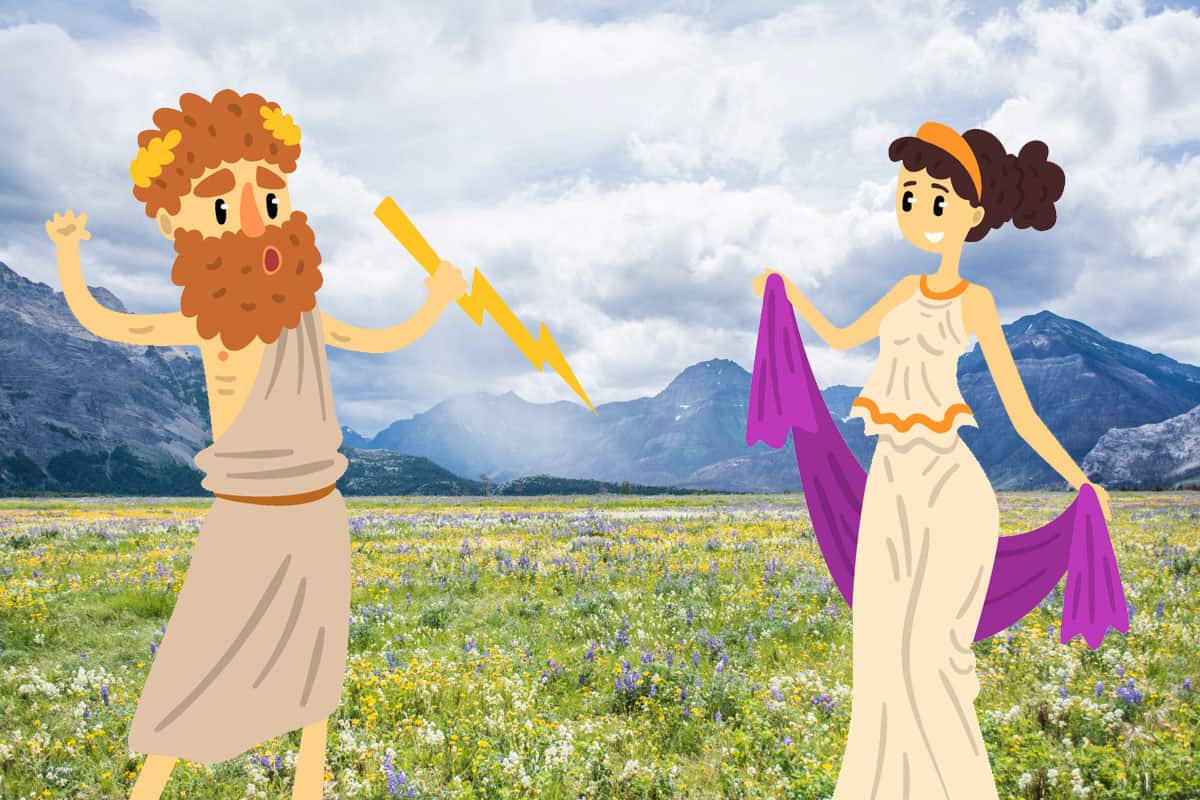 Perhaps even more than he’s known as the god of thunder, the king of the Greek Gods, Zeus, is known as a playboy! Much of ancient lore only came about because when Zeus took a fancy to someone, he had her – and when Hera found out, chaos reigned.

Below is a list of seven of Zeus’s most interesting wives and lovers and some of the stories surrounding them. The consorts on this list have been chosen for their own or their offspring’s importance to Greek mythology. Seven doesn’t even begin to cover them all, but here are some favourites.

Hera – Queen of the Gods

Hera was Zeus’s seventh and final wife – his only permanent wife. Including her in the top spot isn’t only proper. It’s a safety precaution! Much of Hera’s mythology involves her extreme jealousy and acts of revenge, the former of which was almost always justified by her husband’s philandering.

She was actually the goddess of marriage and the family, which meant that Zeus’s repeated betrayals hit home even harder than they might otherwise. The couple only had one son together (Ares). Hera was one of the five original Olympians who took down the Titans.

Hera’s revenge took place against the women and their children, but rarely against Zeus himself. Most famous is the story of Alcaeus, Zeus’s son, by a human woman. From the moment he was born, she tried to kill him, starting with snakes! Alcaeus was later named Heracles, the glory of Hera, to try to appease her. It didn’t work!

Zeus ordered the nymph, Echo, to distract Hera during his affairs. When Hera found out about the deception, she took out her rage on Echo, cursing her so that she could only repeat back the words that other people said. It was terrifying to be a target of Hera’s rage.

Leto was the mother to the twin god and goddess Artemis and Apollo, aspects of the moon and sun, respectively. The twins were conceived after Zeus discovered her beauty and decided he must have her.

Hera cursed Leto that she would not deliver on land or have a place to rest. Hera also kidnapped Eileithyia, goddess of childbirth, to prevent the birth. This was not just jealousy because of the affair, but also because it was prophesized that Leto’s twins would outshine all of Hera’s own children – which they eventually did, literally.

Leto circumvented this with the help of Zeus and Poseidon, traveling to the floating island of Delos. As it wasn’t technically attached to the land, she gave birth there, first to Artemis. Nine days later, with the help of Artemis, she birthed Apollo. Some stories have them born on different islands.

Afterward, though they both served as two of the Twelve Olympians, Artemis and Apollo remained extremely close to their mother. They fought against any potential attackers or perceived insults toward her, at one point slaying all the children of Niobe for a mortal slight.

Io, princess of Argus, was sometimes semi-divine. Some myths portrayed her father, the king, as a river-god named Inachus. She was a priestess of Hera, seduced by Zeus in her dreams due to her loveliness. Unfortunately, when Hera found out, the queen sought revenge.

Zeus decided to transform Io into a white cow to protect her. Still, Hera sent a plague upon the animal, forcing it to constantly run from gadflies. Hera also sent Argus, her giant hundred-eyed servant, to make sure that Zeus could not help her.

Zeus enlisted Hermes’s help, who used music to play Argus to sleep then chopped off his head. His many eyes would later become the tail of the peacock. Io escaped, still pursued by the plague of gadflies. Io ran to the sea, where she met Prometheus, who prophesied that she’d be the mother of heroes.

Eventually, got to Egypt, where Hera’s magic didn’t reach, and Zeus turned her back into a woman. She and Zeus had two children, Epaphus and Keroessa. The former became a great king and the latter, the mother of kings and heroes.

When her affair with Zeus ended, Io married an Egyptian king. In some myths, she is later conflated with the Egyptian goddess Isis.

Themis was Zeus’s second temporary wife. She was Uranus and Gaia’s daughter, the Sky and the Earth, and she had many children, including the infamous Prometheus. She was the most powerful Titaness and was sometimes known as “the goddess of necessity.”

With Zeus, Themis mothered several children who went on to play key roles in Greek mythology. These included Atropos, Clotho, and Lachesis – the three Fates, who are sometimes instead portrayed as the goddess of night Nyx’s daughters.

The Horae or Hours, goddesses of time, and the seasons are always her children by Zeus. They are Auxo (the grower), Carpo (the harvester), Thallo (the gardener), Dike (justice), Eirene (peace), and Eunomia (law).

Themis, as a powerful goddess, was also present at the birth of Apollo, protecting him from Hera’s wrath. Themis also had a powerful sense of prophecy, and she was the first Oracle of Delphi after her mother, Gaia. She held this role until Apollo grew into a man and took it over as was his destiny.

She was one of the few goddesses respected by Hera, despite her connection to Zeus. Her power and fairness were such that the queen always referred to her as “Lady Themis.”

Leda – A Mortal Queen of Sparta

Leda was the daughter of Thestius, the King of Sparta, which also made her the granddaughter of Ares and Zeus and Hera’s great-granddaughter. Though mortal, she was extraordinarily beautiful, and so Zeus desired her as his own consort.

Zeus disguised himself as a swan and flew down to where Leda was sitting outside. He had an eagle pursue him, and the kind-hearted young queen saved the swan’s life. Though she was already married to Tyndareus, Leda lay both with her husband and swan that night.

After the resulting pregnancy, she laid two eggs, which produced quadruplets. Two were children of Zeus and two children of Tyndareus. These included the Dioscuri, the famous twins, Castor and Polydeuces (Pollux), also known as the Gemini in Roman adaptations. The latter was immortal and a son of Zeus, while Castor was mortal, son of Tyndareus.

The other two children were Clytemnestra, Agamemnon’s human wife and mother of the hero Orestes, and the infamous Helen of Troy. The beauty of the last of these would lead to the Trojan War.

Leda’s other children included three more daughters by her husband. These girls were named Timandra, Phoebe, and Philonoe.

Danaë’s father, the King of Argos, locked her in a tower with nothing but a narrow slit of a window allowing in light. The Oracle at Delphi had prophesied that Danaë’s child would kill his own grandfather, and the king didn’t want to take any risks!

However, Zeus fell deeply in love with Danaë’s beauty and transformed himself to come through the window – either as a shaft of light or as a gold shower. Danaë became pregnant with the first of the great Greek heroes, Perseus.

The king cast Danaë and her son away in a trunk into the sea, as he did not want to directly kill them. Zeus asked Poseidon to calm the waves. They floated slowly to the island of Seriphos, where the brother of King Polydectes, Dictys, kept them safe and helped raise Perseus until the latter reached manhood.

While Perseus was off adventuring, Polydectes tried to force marriage onto Danaë despite her objections. Perseus returned just in time with Medusa’s head to turn him to stone and put an end to it!

Maia – The Eldest of the Pleiades

Maia was one of seven nymph daughters of the great world-bearing Titan, Atlas, and the Oceanid nymph, Pleione. Maia attempted to avoid the gods, but she caught Zeus’s eye, who loved her and had intercourse with her while Hera slept. From this union came Hermes, the messenger god.

Though Hera discovered the affair, she didn’t exact vengeance on Maia. Hermes, a born trickster, conned the queen of the gods into feeding him her breast milk as a baby, which meant she felt bonded to him and that Maia was safe. Hermes also stole cows from Apollo as a baby, which Maia refused to believe until there was irrefutable proof.

Maia also raised Arcas, Zeus’s son, by Callisto. Callisto was transformed into a bear by an enraged Hera, so Maia raised the boy who would become a king. Along with her sisters by other mothers, collectively known as the Atlantides for their father Atlas, she also served as a nursemaid to Zeus’s half-immortal son, the future Olympian god Dionysus.

When Maia and her sisters died, Zeus transformed them into the Pleiades star constellation and set them in the sky where they would live on forever.

So, there we have the wives, lovers and consorts of the sky god Zeus. As the king of the Olympian gods Zeus was without equal and as such he felt entitled to marry, cheat and womanize as he liked.

He destroyed many lives with his behaviour, but on the other hand a lot of the most interesting characters and stories in Greek mythology come from his actions.

If you have any comments, then please let us know below.

Bonus – The Myth of Pandora’s Box 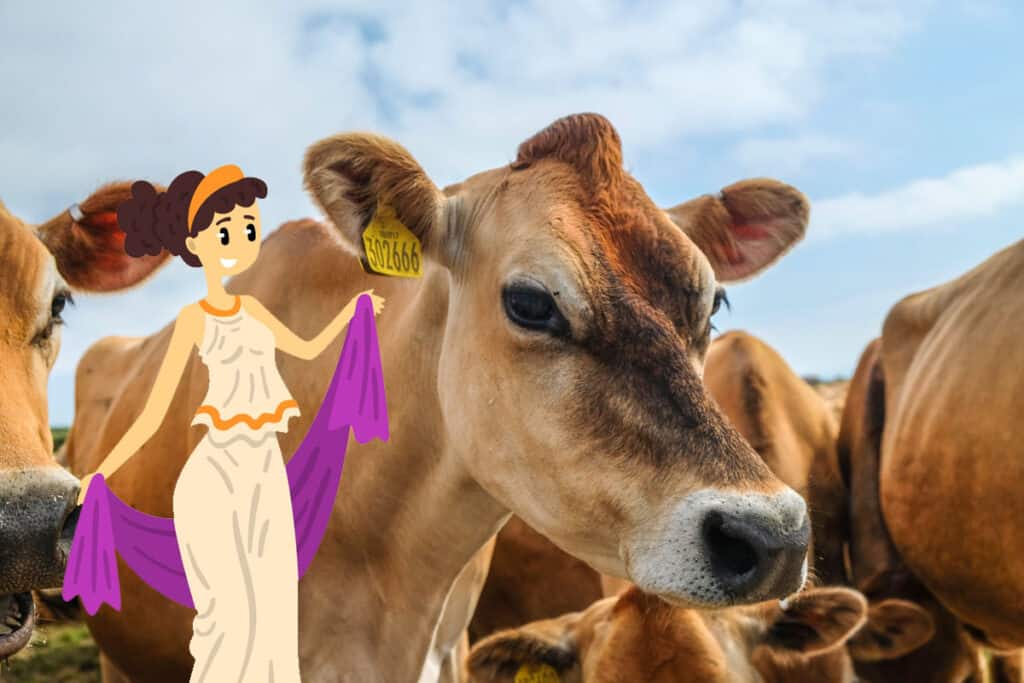 Why Did Hera Hate Hercules?

Hercules is most known for his expeditions and unimaginable strength. But this strength would be …