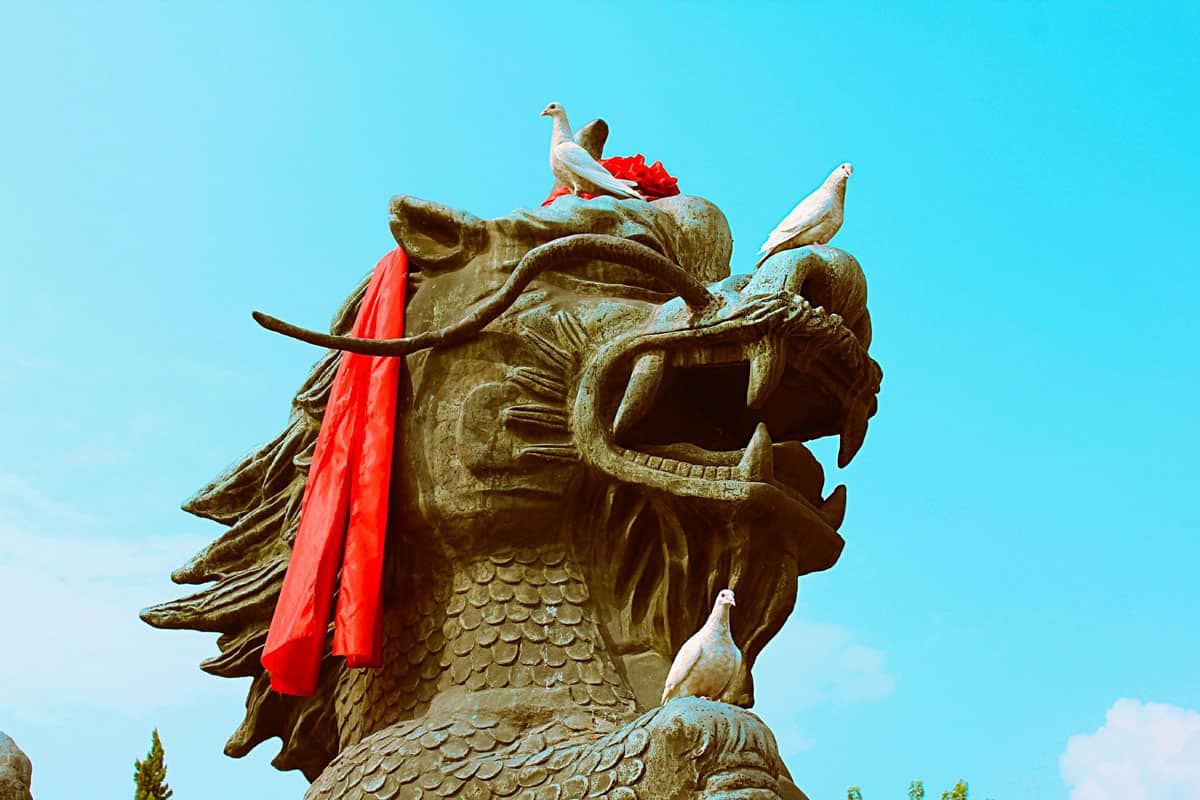 The gods of ancient China were some of the most fascinating in the world. Dragons, moon-women, and monkey-kings – China’s rich mythology had stories that covered everything. China’s sacred gods were good, evil, and anything in-between; each god or goddess was unique with its own tale.

How much do you know about the ancient Chinese gods? If you’re a beginner looking to dive in, or even someone who already has a little knowledge, these fascinating facts will get you started – but they merely brush on the vast depths of the world of Ancient Chinese religion.

25 Facts about Chinese Gods and Goddesses

#1 – The Chinese considered their religion as neither polytheistic nor monotheistic

Although a westerner would define China’s many gods as a pantheon, it’s not really a concept that applies. Every god was a manifestation of qi, the energy of the universe – and so every god was both part of one whole and an individual.

#2 – Several different factors over time influenced the perception, aspects, and even actions of the gods

These included dynamic shifts in the operation of Chinese civilization, dynastic changes, and the influence of movements such as Confucianism, Daoism, and Buddhism.

#3 – Gods and goddesses have many names

This is for many reasons. First, the Chinese themselves gave epithets to many gods. Second, Chinese writing systems did not initially translate directly into Roman lettering until the late 20th-century invention of pinyin. As an example, Yu Huang and Yu Di are the same god!

The trickster monkey bothered the Yellow Emperor enough that the Emperor banished him to the heavens, where he stole the Elixir of Eternal Life.

The number he reached was 233,500 li and 75 double paces. The same measurement went from east to west.

Depending on the story, Chang-E was either a dutiful wife trying to save the Elixir of Eternal Life or a shrew who stole it from her husband. Either way, she escaped to the moon to live her new immortal life.

Gong Gong was either evil or a fool, depending on the tale. Still, his clumsiness or aggression resulted in a hole tearing open in the sky. This caused the heavenly waters to fall and started the great flood that destroyed the world and forced humanity to start anew. Gong Gong was often blamed for any bad weather later.

#9 – A Yellow Dragon once disguised himself as someone’s puppy

King Yen was discovered in an egg by a dog named Guacang (Ku-T’sung). The two were close companions, and when Guacang died, the dog was given a dignified funeral. After the funeral, Guacang revealed he had been a nine-tailed Yellow Dragon in disguise the whole time.

#10 – Hou Ji, the mythic founder of the Zhang Dynasty, was abandoned in a ditch as a baby

Hou Ji’s mother, Jiang Yuang, birthed him as a virgin. Her pregnancy was caused by dancing in a god’s footsteps or as a reward for her many sacrifices. When he was born, she abandoned him, but she went back for him when she realized his divinity.

The great thunder god often made blunders. He tried to help an old lady and nearly gave all humans the secret of immortality. He accidentally killed an archer who helped him hunt a beast and had to bring him back to life. A third story even involves him resorting to recruiting a young human boy to help him out of a tree!

#12 – There were Eight Immortals of Daoism, but they weren’t gods

They were known as the Ba Xian…

These appeared to people as mountaintops. It was one of these pillars, Buzhou, with which Gong Gong had his run-in! The Jade Mountain was also a pillar.

He was a companion of Chang-E and always mixed the cauldron containing the liquid (which could be seen as a crater from the earth). Their third companion was an old man named Wu Kang, who was banished to the moon for a terrible musical performance. He spent his time trying to destroy the tree of longevity, but it kept growing back.

Feng Po Po, or Madame Wind, was a crone goddess who took Fengbo’s place. Fengbo was the deer-bodied, bird-headed grotesque god who ruled the wind. Fengbo was a white-bearded old man by the Ming Dynasty, making Feng Po Po an acceptable replacement.

#16 – The body of Pangu, the Earth’s Creator, became five sacred mountains when he died

They each represented one of the cardinal directions. His head became Tai Shan in the east, his arms became Heng Shan in the north and south, his legs became the western Hua Shan, and his stomach was the central Song Shan.

#17 – Gao Xin’s daughter married his dog, which was once a worm

A worm residing in Gao Xin’s ear was removed and became a dog named Pan Hu. During a later war, Gao Xin promised his daughter’s hand in marriage to whoever slew his worst enemy. Pan Hu brought him his enemy’s head, so Gao Xin was bound to keep his promise. He wanted to break it, but his daughter wouldn’t let him!

#18 – A dead empress became the earth

After Hou Tu died, she came back as the soil goddess or the representation of the earth. She had many children and many identities and was associated with fertility and rebirth. She was especially worshipped during the Han Dynasty.

#19 – One spirit’s entire job was protecting from locusts, grasshoppers, and cicadas.

His name was Ba Zha, and though his upper body was human, he possessed several strange features. These included the lower half of a bell, and a bird’s beak, wings, and claws. He caught locusts using magic liquid.

Can Cong was an important god to China, where silk was a prime export. He had thousands of golden silkworms who produced the finest silk. Each year at the new year, he would gift one of these worms to humanity, and it would multiply greatly.

No man was ever able to find this island. If a child born to an island woman was male, the child would die before he reached three years of age. It was named The Country of Women.

#22 – Dragons served as messengers to the gods

Each of the dragons would fly to heaven every year, where they would report on humanity and how the people were behaving. Some of the dragons, but not all, were considered gods within themselves.

Fang Feng was a very ancient god. When Yu took charge and called a meeting of the gods, Fang Feng was the only person to turn up late. Yu was very offended by this disrespect and had Fang Fend put to death. Nobody showed up late for his meetings after that!

#24 – Fuxi and his sister repopulated the earth after the flood

As the only two left remaining, Fuxi and his sister became the parents of all of humanity. Fuxi became the very first emperor of China. Fuxi was already beloved by the gods as he had saved the life of the thunder god Lei Gong in his childhood. They got special permission from the gods so that they could marry despite their relationship.

In life, Hua Fu was a healer who wrote about operating on stomach ulcers. After his death, he was elevated to godhood. He became a specialist in the ministry of the medicine god, Tian Yiyuan.

So there we have just a few fascinating facts about the Chinese gods and goddesses. From the monkey king to the 8 immortals, there is just much to dive into with Chinese mythology.

If having read this brief overview, you find you have something to say then please let us know. We love to hear what our readers think.