Skip to content
Home » Greek God Questions: Everything and Anything 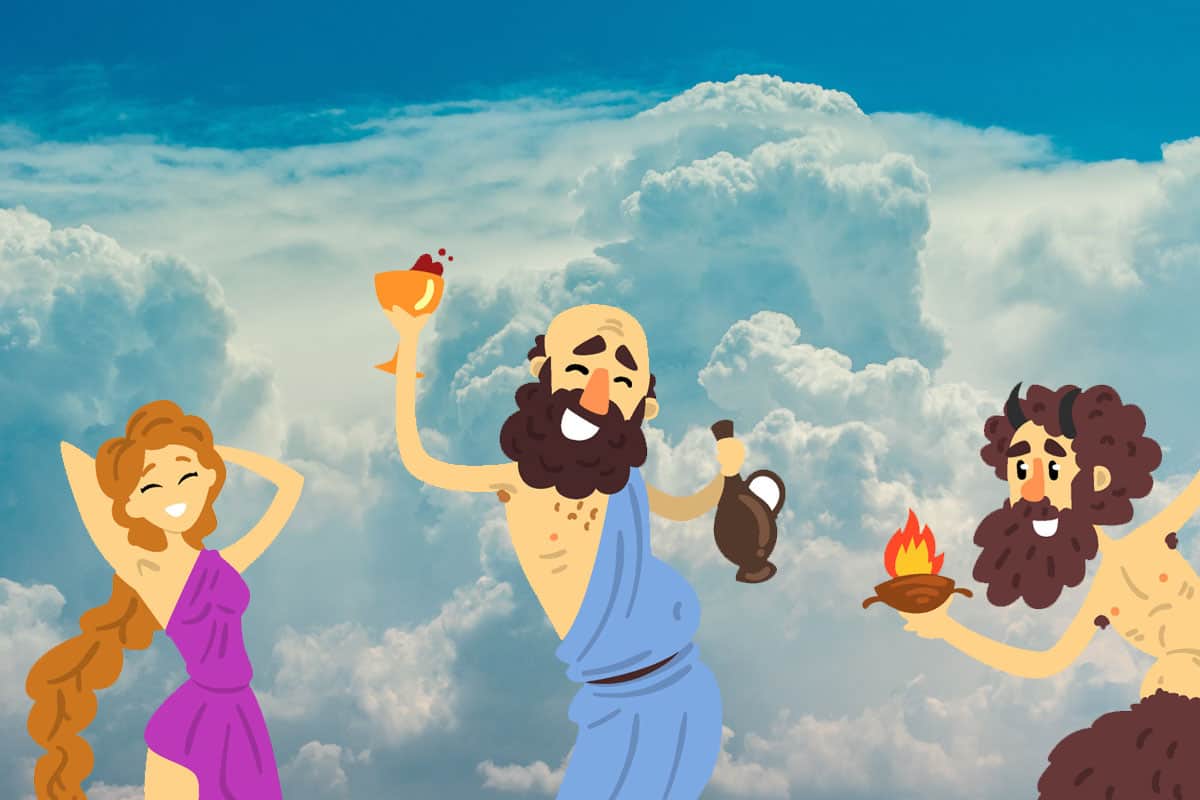 In Greek mythology, there were tonnes of gods.

In fact, there were a number of different ages where different groups of gods were dominant. First came the primordial Gods like Uranus and Gaia who represented the sky and the earth. Then came the Titans, great hulking beast gods. And finally came the more familiar Olympians like Zeus, Poseidon and Apollo. Most people when they talk about Greek gods are referring to this last grouping. In today’s answers we have concentrated on this grouping, but when necessary we have look at the other gods.

They are a fascinating bunch, so let’s dive in!

Why Were the Greek Gods Created?

In the beginning there was only a void of swirling randomness called Chaos. After an eternity Chaos gave birth to the two children, Nyx – Night, and Erebus – Darkness. After a great deal more time Gaia – Earth and Uranus – Sky came into existence.

It is from the union of Gaia and Uranus that most living creatures were born. Their children were numerous and include the cyclopes, the 100- hand giants, and most importantly the Titans.

The Titans under Cronus overthrew Uranus and later Cronus and his wife gave birth to many of the Olympian Gods including Zeus, Poseidon and Hera. In turn these children overthrew Cronus in the Titanomachy and then 12 Olympian Gods and Goddesses ruled from their seat of power on Mt. Olympus.

How Many Greek Gods Are There?

This is pretty difficult question to answer for a few reasons.

So there are a few different answers to the questions. However, lets take a look at some of the more important groupings.

First and foremost we can look at the Olympians. There are said to be 12 Olympians. Zeus, Hera, Poseidon, Demeter, Athena, Apollo, Artemis, Ares, Hephaestus, Aphrodite, Hermes, and Dionysus. The Goddess Hestia was previously an Olympian god but she gave up her place for Dionysus to join. Also, Heracles was made into a god and lived on Mt. Olympus but was not a member of the pantheon of 12 Olympians gods.

There are two other Gods associated with this group – Hades and Persephone, the King and Queen of the Underworld. Hades was the brother of Zeus but was given the realm of the underworld to oversee, and Persephone was abducted and made to be his queen. These gods and goddesses went on to have other children who were gods, demigods, nymths and so on.

If we step back to the previous age we can look at the Titans. The term Titan god is also used to describe this grouping. the primordial gods Uranus and Gaia had 12 titan Children. There were 6 male Elder Titans, Cronus, Coeus, Crius, Hyperion, Iapetus, Oceanus. And there were 6 female Elder Titans, Rhea, Tethys, Themis, Theia, Phoebe, Mnemosyne. Cronus and Rhea were the parents of some of the Olympians – Zeus, Hestia, Hera, Poseidon, Hades, and Demeter.

However, the other Titans went on to have numerous other children too. Some of whom could certainly be classed as gods. These include Prometheus and Atlas, or Helios, Eos and Clymene.

The primordials were the gods who began the Greek universe. We have mentioned Chaos, Uranus and Gaia already. But there were many more associated with a whole host of realms. What follows is just a few of them.

So, to answer the question in any exact way is pretty difficult. However a good estimate which isn’t out by orders of magnitude would be to say that there are around 400 major and minor gods and goddesses.

Do Greek Gods Have Last Names?

Greek gods didn’t have last names in the modern sense of a last name being the shared family name. However, in ancient Greece it was common for someone to be identified in the following way.

As king of the Gods Zeus was incredibly important and so there are a great many epitaphs to his name.

Most of the major Olympian gods would have multiple epitaphs much like Zeus.

Are the Greek Gods Fair?

This is another difficult question to answer because there is so much varied information on the characters of the Greek gods. The Greek gods are a product of the Ancient Greeks themselves and so the gods were in large part fallible. Meaning they could be fair and sometimes unfair.

I think it is fair to say that the Greek gods would very often work in their own interests. This could result in fair and just acts on earth. But it could just as easily result in some great injustice.

You only need look at a few of the Greek myths to illustrate this idea further.

In the myth, Perseus is tasked with killing Medusa and retrieving her head. The odds are against him so Hermes and Athena arrive to help him with some gifts and weaponry. Balancing the odds. He does kill Medusa in the end. But if we take a deeper look at Medusa. She was only in the cave and cursed by Athena because she had been seduced by Poseidon. A situation very much outside of her control and so for her to end up killed seems unfair.

Theseus and the Minotaur

Theseus was tasked with killing the Minotaur because for years it had been eating the children of Athens. Theseus was able to enter the labyrinth and kill the beast, seems fair and just. But, why was the Minotaur even in there. The King of Crete had been cursed by Poseidon for not sacrificing a bull during a festival. The curse caused his wife to fall pregnant and have the Minotaur as a son. The King locked him away beneath his palace. Seems somewhat unfair to the Minotaur, he didn’t ask to be brought into the world.

So, basically the Greek myths are multifaceted and there is no clear case of fairness in most of the myths.

A few gods are said to be attacked and to bleed. One of the most famous examples in when Ares, the god of war, is hit with a spear and he bleeds.

Do Greek Gods Have Powers?

We discussed above how there are many different Greek gods and a great many of them do have powers. The 12 Olympian gods are good examples to discuss this in more detail. There were a few basic powers that they all shared.

And then there were a number god specific powers that they put to use in the myths.

The Primordial gods and Titans also had a whole host of different god powers which they used to transform and bend the world to their will.

Do Greek Gods Have Birthdays?

The Greek gods do not have a birthday because they were born in a time without a clear chronological calendar. That being said, there is some description of the birth order of some of the Olympian gods.

6 of the Olympian gods were the children of the Titans Cronus and Rhea. Cronus got wind of a prophecy that one of his children would overthrow him so he took to eating his children when they were born. The birth order was Hestia, Hades, Demeter, Poseidon, Hera, and then finally Zeus.

When Zeus was born his mother switched him with a stone covered in a blanket and Cronus ate this instead thinking it was the child. Zeus grew up and when he returned to fight his father he made him regurgitate his siblings. This produced the children in reverse order – Hera, Poseidon, Demeter, Hades and then Hestia.

In Greek mythology there are not many stories of the gods sleeping. However there is in fact a god of sleep called Hypnos. He is married to Pasithea and together they have children called the Oneiroi which translates as dreams.

There are two stories of Zeus being put to sleep, so there is some evidence that the Greek gods do sleep. The first story begin as follows.

Heracles the son of Zeus had sacked the city of Troy on an occasion long before the great war. Hera, who was always trying to cause issues for Heracles, asked Hypnos to put Zeus to sleep. He did so and she was able to conjure up a storm and blow Heracles ship off course on his return voyage. When Zeus awoke he was furious and searched everywhere for Hypnos. He couldn’t find him because he was hiding with his mother Nyx, the goddess of darkness.

The second tale is actually during the events of the Trojan War. Hera was on the side of the Greeks and she wanted to help them out. Zeus had already banned any of the gods from taking sides so she again asked Hypnos for help. This time his condition was that he wanted the hand of Pasithea in marriage. Hera agreed and once again Hypnos put Zeus to sleep. Hera then informed Poseidon,who was also on the side of the Greeks, that Zeus was asleep and with the help of the gods the Greeks were able to defeat the Trojans.

In Greek mythology it is the Moirai aka the Fates who control fate. The fates were the 3 daughters of Zeus and Themis. They were said to regulate birth, life, and death. Even the gods could not overturn the rulings of the Moirai without risking chaos.

The fates were called Clotho, Lachesis, and Atropos. Clotho would spin from her spindle each person’s thread of life. Lachesis would measure out the length of what had been spun and Atropos when choose to cut the thread at random, thus cutting short the life of many a mortal.

Many gods and mortals would attempt to fight against the fates they had been dealt but they could never break free of the path.

The Greek gods are said to have a very particular food called Ambrosia. There are a few different accounts of what Ambrosia is but most people agree is looks something like honey.

Ambrosia had the power to grant the gods immortality. If Ambrosia was eaten by mortals it would also have the same effect. The mortal Psyche who was married to Eros was given Ambrosia to grant her immortality.

Along with Ambrosia the gods would drink a beverage called Nectar. This, like Ambrosia, was sweet tasting.

Do Greek Gods Have Wings?

Not all but a significant number of Greek gods do have wings.

The religions of Greek mythology is called Hellenism. In the last few millennium it has fallen out of favour. But, in the last few decades it may have received a resurgence in interest.

In 2006 the Greek government ended the ban on the worship of Zeus and co and today authorities believe that more than 2000 people in Greece follow the religion.

So, that’s its for questions about the Greek gods. Some of these were incredibly random. I hope you enjoyed the answers and if you have any more question for us to answer then please feel free to write them below. Thanks!

Bonus – The Greeks who Pray to Zeus