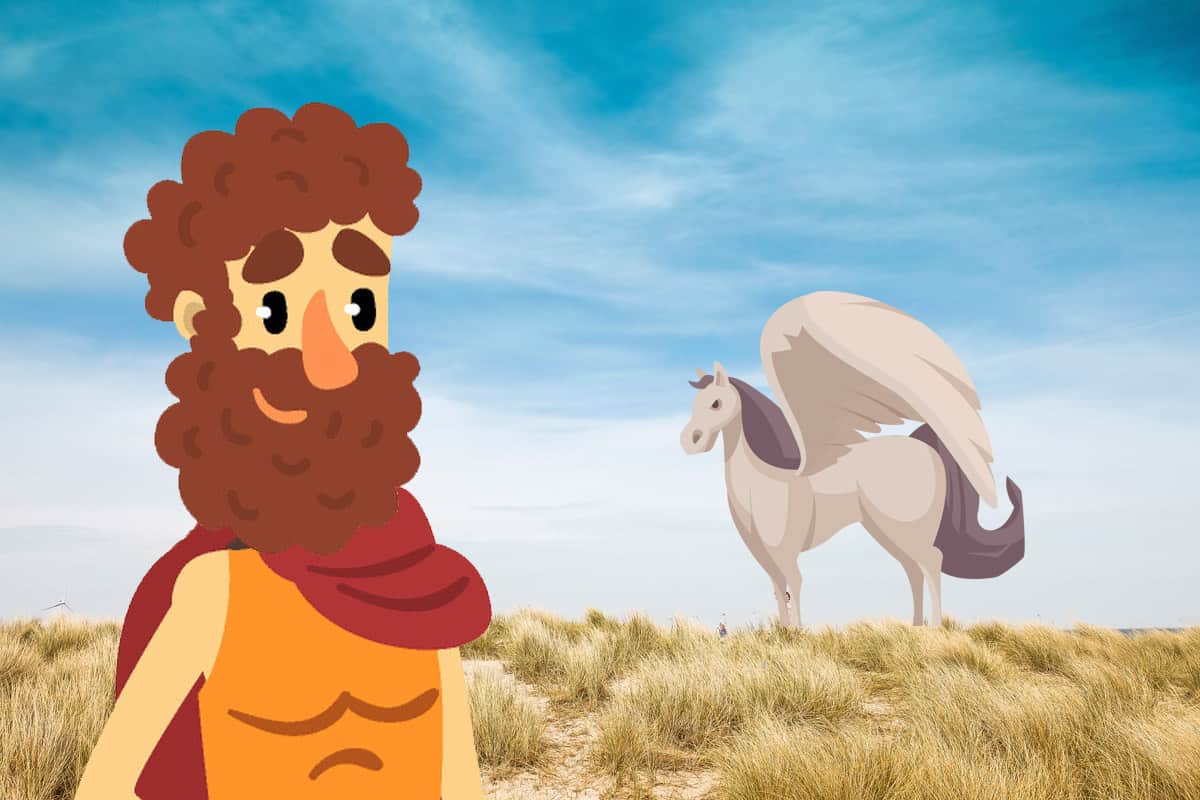 Bellerophon (also Bellerophontes) was one of the three greatest Ancient Greek heroes before the time of Heracles, alongside Cadmus and Perseus. Bellerophon was most noted for being the rider of the winged steed Pegasus, and as the one who managed to slay the terrifying Chimaera.

Bellerophon is not as well-known to the common imagination as Perseus and Heracles; in Renaissance art, he was often entirely replaced as Pegasus’s rider by Perseus. However, the myths about this man are fascinating, and the stories describe below show a great hero who was not afraid to challenge even the gods.

Myths and Stories About Bellerophon

Eurynome was a mortal, a Megarian princess who married Glaucus, son of Sisyphus and became the Queen of Corinth. Sisyphus was cursed by the gods to not have line continue, but Eurynome slept with the sea god Poseidon and became pregnant. Her son, Bellerophon, had a brother named Deliades, who was entirely mortal.

In some stories, despite Sisyphus’s curse, Bellerophon and Deliades (or just Deliades) are the trueborn sons of Glaucus. In others, Deliades is the son of another mortal man.

Bellerophon considered Glaucus his true father, and his grandson was later named after Glaucus.

Bellerophon was exiled from his homeland after killing a man in an accident. Often, this man was his own brother, Deliades. He was sent to serve King Proteus of Tiryns, who was an uncle of Perseus. Proteus was pleased with Bellerophon’s service and eventually absolved him of all criminal wrongdoing.

However, Proteus’s wife (alternatively named Stheneboea and Anteia), became sexually and romantically attracted to Bellerophon. Bellerophon was loyal to Proteus, and so rejected Stheneboea. Feeling scorned, she accused him of trying to rape her.

Proteus was outraged but did not want to kill Bellerophon and risk Zeus’s wrath for breaking xenia, guest right. Instead, he sent Bellerophon away to live with Sthenoboea’s father, Iobates.

Iobates greeted Bellerophon as a guest and feasted with him for nine days. On the tenth day, he opened the sealed tablets sent by Proteus along with Bellerophon, only to see that Bellerophon had supposedly attempted to rape his daughter. Proteus had included a message asking Iobates to kill Bellerophon.

By now, Bellerophon was again protected by guest right. Iobates did not want to risk Zeus’s rage and a visit from the Furies, and so he set Bellerophon a task he thought that the young man probably could not survive. To be forgiven for his so-called crime, Bellerophon must slay the fire-breathing monster, the Chimaera. It was a creature with the body of a goat, the tail of a serpent, and the head of a lion, and it was deadly.

Bellerophon agreed and set out for the Chimaera’s lair.

Polyeidos was a famous Corinthian seer who had once saved the life of Glaucus of Crete – a different Glaucus to Bellerophon’s father – and was therefore celebrated. He met with Bellerophon while the hero traveled to defeat the Chimaera and they became friends.

When he learned of Bellerophon’s mission, he advised Bellerophon how to find his half-brother Pegasus, the son of Medusa by Poseidon. Pegasus was a winged steed, and by taming and claiming him as his mount, the hero would stand a chance against the Chimaera.

Following the advice of the seer, Bellerophon found a temple of Athena and made offerings there. He then slept in the temple and was visited by the goddess in his sleep. She offered him a golden bridle, which was the only way to capture the winged horse.

Bellerophon then sacrificed a white bull to Poseidon, tamer of horses and father to both Pegasus and Bellerophon. The god then directed Pegasus to a specific well. Bellerophon arrived there as directed by Athena to find Pegasus drinking the water.

He slowly approached Pegasus, careful not to startle him. When Pegasus noticed, he reared up, but Bellerophon had already slipped the bridle over the horse’s face. Pegasus became docile and allowed Bellerophon to mount him, and the two of them flew off to fight the Chimaera.

The monster was more ferocious than even Iobates had predicted. With its ferocity and breath of fire, even Pegasus was not enough to help Bellerophon defeat it on the first try. Bellerophon was clever, however, and discovered a way to use the monster’s own nature against it.

He found a spear made of lead and, when the Chimaera next opened its mouth to breathe blame, Bellerophon flew forward on Pegasus and stabbed the spear into the creature’s throat. The Chimaera’s flame melted the lead to liquid inside its own body, and the liquid metal burned it from the inside, causing it to suffocate or drown.

Victorious, Bellerophon was celebrated by the townspeople, and returned to Iobates to clear his name.

Iobates greeted Bellerophon with some disbelief, even with the evidence he provided of his victory. The king claimed that the hero would have to undertake several more tasks before clearing his name, which Bellerophon agreed to readily.

First, he was sent to war with the Solymi, from which he emerged victorious. Next, he fought against the warrior women, the Amazons, who held the mystical powers of their father, Ares. Bellerophon flew above them on Pegasus and dropped boulders, killing their leaders and taking the victory.

His next task was to kill the Carian pirate, Cheirmarrhus. During this quest, he was ambushed multiple times by assassins, but managed to slay every man who attempted to kill him.

8. Returning to the palace and claiming a wife

Bellerophon returned, victorious once again, to the palace of Iobates. Since he was no longer a guest, Iobates felt free to send the palace guards to kill him. Bellerophon called upon the help of Poseidon, his father, who sent a great flood across the city.

The women of the palace, fearful for their friends, husbands, and sons, ran out and placed themselves before the rushing flood, lifting their robes high and exposing themselves. They would either die as human shields or they would allow themselves to be claimed as sexual conquests or wives by Bellerophon.

Bellerophon did not want to see these women offering their lives and bodies to him, and so he asked Poseidon to call off the flood and stopped his attack.

He came before Iobates and once again claimed his innocence from Stheneboea’s accusations. Since he had neither killed nor accepted the offers of the exposed palace women, Iobates believed him at last and the men formed a truce.

Iobates had another daughter named Philonoe, and because of Bellerophon’s heroism, he offered her to him in marriage. Bellerophon accepted and afterward ruled half of Iobates’s kingdom. Stheneboea later committed suicide.

9. A Father and Grandfather

Bellerophon and Philonoe became the parents of three children. Their oldest was Peisander or Isander, who fought for the Trojans in the great war between them and the Greeks. Though they were on the same side of the war, Peisander ended up killed by Ares, the god of war.

Their second son, Hippolochus, was the father of Bellerophon’s grandson, Glaucus of Lycia. Glaucus also fought for Troy and faced Diomedes of Greece on the field. When Diomedes realized who he was, he laid down his arms and the two became friends because Diomedes’s grandfather, Oeneus, had been a great friend of Bellerophon.

Their daughter Laodamia, also known as Hippodamia or Deidamia, was killed by a single shot by Artemis while she was weaving (though this may have been a euphemism for a sudden death). Laodamia became the mother of a child by Zeus, Sarpedon.

Bellerophon continued to serve as a hero, and he grew more and more famous. As he did, his ego began to inflate until he became influenced by hubris, a great pet peeve of the gods. Thinking himself divine, Bellerophon decided to fly to Olympus and take a seat amongst the gods. He took Pegasus and started to fly up the mountain.

Zeus was extremely angered by this, and he sent a gadfly to sting Pegasus’s rump. The horse reared in midair, sending Bellerophon tumbling to the earth below. Pegasus continued his flight and Zeus claimed him as a packhorse to carry his lightning bolts. He also sometimes served as a mount of Athena and visited with his father, Poseidon.

Bellerophon, meanwhile, landed in a thorn bush and became blind. He lived out the rest of his life alone and in misery, wandering from place to place seeking alms and repenting for his crimes until the day he finally died.

After Bellerophon’s death, Pegasus stayed in Olympus with Zeus. After he lived a long, fruitful life serving Zeus, he died a natural death. For his service to both Bellerophon and Zeus, as well as in recognition of his parentage by Poseidon, Pegasus was placed amongst the stars as a constellation.

Perseus has always been a much more favored cultural hero for those who studied Classic Greek mythology. This is because he was the founder of the Perseid dynasty, which included many important figures in later myths. Perseus’s descendants included Heracles, Helen of Troy and her brothers the Dioscuri (Castor and Pollux), and many others.

Because both were monster slayers and the children of a god and a mortal, people in the Middle Ages often conflated the stories of Bellerophon with those of Perseus. This was cemented in the Renaissance, when many paintings and writings depicted Perseus in Bellerophon’s roles. Since Perseus and Bellerophon were paternal cousins in mythology, this further confused the issue.

Most significantly, Perseus was often declared as the rider of Pegasus. In this version of the story, after he slayed Medusa and Pegasus emerged from her neck, he placed the golden bridle upon the horse. After that, Pegasus served as his escape route to fly away from the vengeful Gorgons. In the original mythology, Perseus escaped the Gorgons by flying with the winged shoes of Hermes.

This lost play offered an alternative version of Bellerophon’s flight to and consequent fall from Olympus. Only about ninety lines of the play survive, so it is hard to know the exact details of the tragedy, but in this version his wife and child died and led to his madness, possibly to try to resurrect them. He even began to doubt in the existence of the gods, an even greater sin than hubris.

Some of the most significant of the surviving quotations are below.

Interestingly, in some interpretations of the play, the atheistic thoughts are not attributed to Bellerophon himself but rather to Stheneboea. In this version, she curses the gods for making her fall in love with Bellerophon only to be spurned by him and eventually have him wed her sister instead.

Bellerophon met one of the grizzliest ends of the heroes and was doomed to be forgotten by the people in favor of other cultural heroes. However, apart from his hubris, he was a man of great moral standing. Perhaps it is time that more light shines upon him!