Skip to content
Home » 12 Poseidon Wives and Lovers: Who Are They? 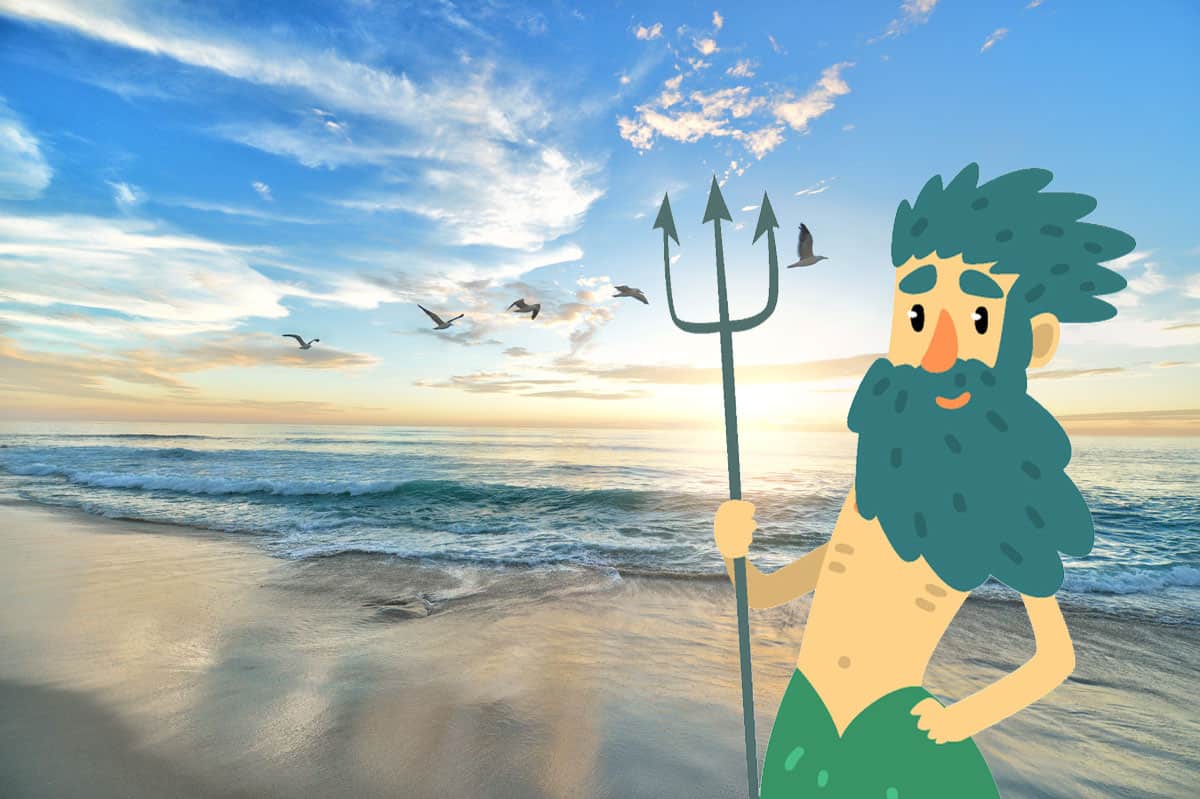 Poseidon, the god of the sea, storms, earthquakes, and horses, collected wives and lovers throughout Greek mythology. Some were male and some female, some enthusiastic, and some with whom consent was a bit more of a thorny subject. Poseidon was second only to Zeus, King of the Gods, in the number and variety of lovers to his name.

Since twelve was significant to Ancient Greek religion, this list covers twelve of Poseidon’s most interesting sexual and romantic interests in Greek myth. We’ve also included some of his most famous children for entries involving women, and note when his lovers were men.

#1 – Amphitrite, Queen Goddess of the Sea

Amphitrite was Poseidon’s official consort and wife. She was variously a Nereid, Oceanid, or simple personification of the sea. She was the mother of all seals and dolphins and also the mother of many sea monsters. She was treated like a queen and equal in portrayals with her husband, which often showed her next to him on his chariot or on a throne beside him.

Poseidon first saw Amphitrite dancing with her sisters, the Nereids, at Naxos. He fell for her immediately. In some versions, he won her heart. In others, she fled from him, and he sent a dolphin after her to persuade her, and she returned to be his queen. The dolphin was rewarded by becoming a constellation.

Like his brother, Zeus, Poseidon was not at all faithful to his wife. However, he and Amphitrite seemed to have a significantly less antagonistic relationship than did Zeus and Hera.

#2 – Demeter, Goddess of the Harvest and Agriculture

Demeter was Poseidon’s sister and one of the original six Olympians. Poseidon desired her, but she spurned his advances. When he persisted, she transformed herself into a mare and hid amongst horses. However, as the god of horses, Poseidon found her quickly. He transformed into a stallion and captured her, either coaxing her or raping her into a union while they were horses.

Their union produced two children. While Despoina was a humanoid goddess of mystery, their son, Areion, was born as a black stallion. Areion later became a protective mount of Poseidon’s half-human nephew, the Hero Heracles, among others. Despoina was sacred to the followers of the Arcadian mysteries.

Both Areion and Despoina were the younger siblings of Demeter’s daughter, Kore, who was later known as Persephone. Persephone was the wife of Hades, and her father was either Zeus or a mortal.

#3 – Aphrodite, Goddess of Love and Beauty

Aphrodite is sometimes Poseidon’s niece, and sometimes his aunt, depending on whether she’s the offspring of Zeus or Ouranos! Either way, she was a lover of many of the Olympian gods, bearing children to Hermes, Poseidon, Dionysus, and, most famously, Ares. She was married to Hera’s son Hephaestus, but the two never produced any children.

Though they did act as consorts for a short time, Aphrodite’s relationship with Poseidon was short-lived. After she began her intense romantic affair with Ares (despite already being married to Hephaestus), Poseidon was very supportive of it. When Hephaestus exposed the affair, Poseidon helped to get them free of his trap.

Medusa was originally a beautiful woman whom Poseidon raped or seduced in one of Athena’s temples. Athena’s outrage all focused on the woman, who was transformed into a monstrous gorgon as punishment.

Medusa and her sisters became monsters with gazes of stone. She was eventually slain by Poseidon’s nephew, the half-human Hero Perseus, who sliced off her head. From the bloody stump emerged one winged horse – Pegasus – and his humanoid twin, Chrysaor. Pegasus later became the mount of Perseus and other Greek heroes, while Chrysaor fathered the triple-headed giant Geryon.

Alcyone was a companion of Artemis and a daughter of the Titan Atlas and the Oceanid Pleione. She attracted Poseidon’s attention, and despite Artemis’s disapproval, the two started a relationship that produced several children. The actual number of offspring is unclear, as some names may be alternates for others, while some children remain unnamed!

Celaeno, another one of the Pleiades, was also a lover of Poseidon. The other five sisters were lovers of Zeus, Ares, Sisyphus, and Orion.

Patroclus is most known as the tragic lover of the Greek hero Achilles, but both men also took a god for a lover! While Achilles was loved by Zeus, Patroclus was favored by Poseidon. While fighting for the Greeks – the same side of the Trojan War as Poseidon – Patroclus slew many enemies. However, he was struck down tragically after Apollo removed his wits. This also led to the death of Achilles, mad with grief.

Poseidon loved Patroclus at war, but there are also stories of them meeting in Elysium, the afterlife for the greatest of the Greek warriors.

Cleito’s father, Evenor, was a direct descendant of the kings of the lost city of Atlantis. He and his wife, Leucippe, only had one daughter. Both Evenor and his wife were born directly from the earth, but Cleito was born naturally. Her parents died when she got to marriageable age, and Poseidon took her as a secondary consort. She birthed him five sets of twin boys!

Nerites was a minor sea god and the son of Nereus and Doris. He was their only son, and his fifty sisters were known as the Nereids, some of whom were also lovers of Poseidon!

Nerites served as Poseidon’s youthful charioteer. The two shared a reciprocated romantic and sexual relationship, which served as the origin of anteros, mutual love. Sadly, he ended up as a shellfish! One story blames Helios, the sun god, wanting Nerites for himself and being angered by his refusal. In another, Aphrodite performed the curse for similar reasons. In this version, Nerites turned down Aphrodite’s love only because he could not bear to leave the sea.

Pelops was the son of Tantalus. He died and was resurrected as a youth. He spent some time as a charioteer and apprentice to Poseidon. During this time, the two were lovers.

In his adulthood, Pelops wished to win the hand of Princess Hippodamia of Pisa (a town in Peloponnesus, not in Italy!). Her father, King Oenomaus, challenged him to a chariot ride.

Pelops prayed to the sea, reminding Poseidon of their love. Poseidon appeared to him and gifted him with a chariot pulled by winged horses as a gift. Pelops used this chariot to win the race, Hippodamia’s hand, and Oenomaus’s throne.

Larisa was a type of nymph and also the daughter of a prince of Argos. She and Poseidon had an affair over several years, which produced three sons. Each of these sons journeyed from Argos once they reached adulthood and founded Haemonia (Thessaly). The sons then each named a region after themselves.

Larisa’s name lives on in towns and as one of the moons of Neptune. She is also often found portrayed on ancient drachmae.

Libya was the daughter of King Ephaphus of Egypt and Memphis. She was the personification of the country of Libya. In Greek myth, she was ravished and gave birth to the twins Agenor and Belus, then later, through another encounter, gave birth to Lelex.

In the Roman equivalent myth, she was actually a wife of Neptune (Poseidon). Their son, Busirus, became a brutal tyrant in Egypt. He was eventually killed by Neptune’s nephew, the Hero known as Hercules (Heracles).

#12 – Euryale, the second Gorgon OR Princess of Crete

Euryale was Medusa’s older sister. While Medusa was mortal, Stheno and Euryale were already immortal before Athena cursed them to become the monstrous Gorgons. Though they had several other siblings through one or both of their parents, usually listed as the primordial sea god and goddess Phorcys and Ceto, the three Gorgons are almost always referred to as a unit.

Poseidon took Euryale as a lover at some point after the death of Medusa, and their union produced one child. This son was Orion, the hunter who would later become the constellation of the same name after he died.

In another version of the myth, Orion’s mother is not this Euryale, but instead Euryale, a daughter of Minos who held the same name. Poseidon took her as a lover after he had punished Minos for his transgressions by cursing Minos’s wife so that she would fall in love with and reproduce with a bull, producing the Minotaur. This may have been a separate event or a continuation of Minos’s punishment.

It is safe to say that Poseidon was not a loyal husband. He had numerous affairs with many different lovers. He also sired a number of children many of whom went on to play important roles in later myths.

Hope you learnt something and enjoyed this list. Let me know below!

1 thought on “12 Poseidon Wives and Lovers: Who Are They?”