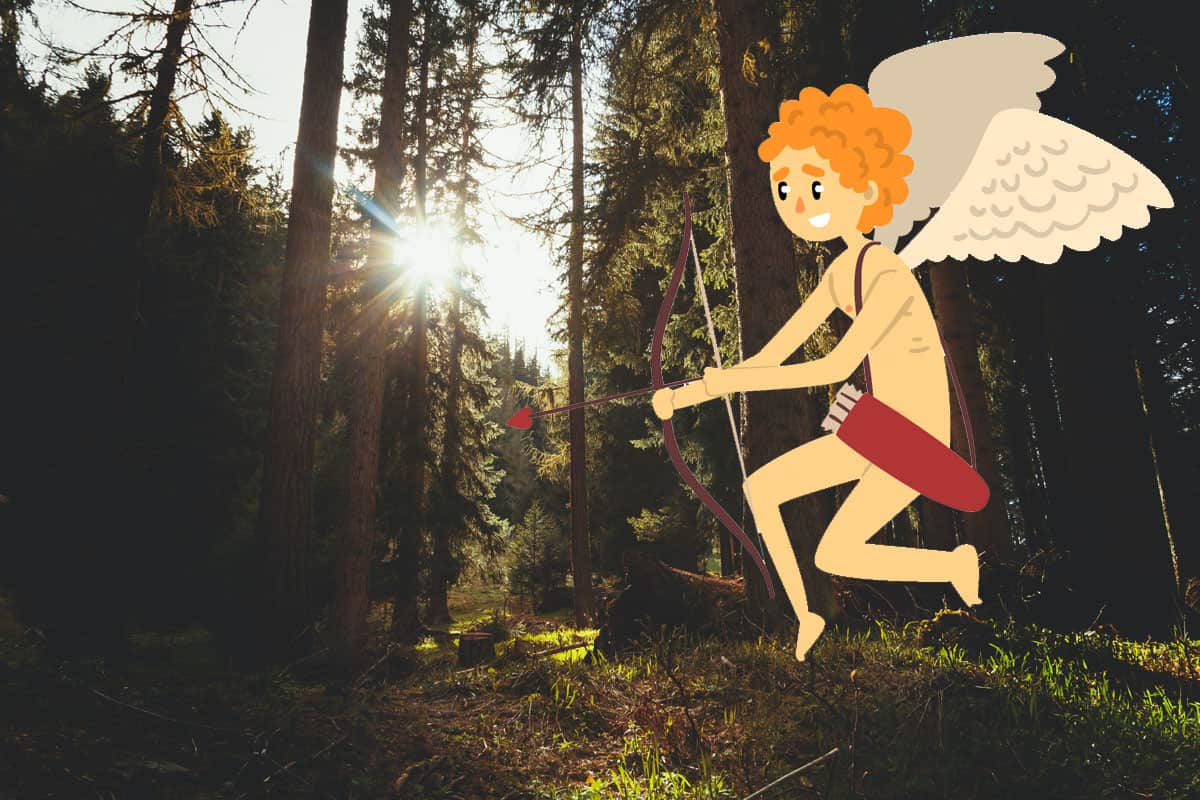 Eros isn’t one of the Twelve Olympians or the gods of the Greek Underworld, so why was he important?

Eros’s Roman equivalent, Cupid, has come to be associated over the years with the cherubic little figures on Valentine’s day cards. The mythological version, though, was a grown, handsome man who had a bit more impact than a baby!

What Was the Role of Eros, and What Are Some of the Key Myths in Greek Mythology?

Eros was the first son of Aphrodite and Ares and the leader of a group of his brother, known as the Erotes.

These siblings oversaw matters of love, and all were winged. The core Erotes were Eros himself (desire), Anteros (requited love), Himeros (unrequited love), and Pothos (yearning). Along with these full blood, brothers were some of their half-brothers; Hermaphroditus (god of intersex people and effeminate men, he was a son of Hermes) and Hedylogos (god of flattery, unknown father). The final Erote was Hymenus (god of marriage), who was born of Apollo and a nymph.

He was often used by Hera or other Olympians to strike love into people’s hearts, which he could do by targeting them with his bow and arrow.

Eros’s most famous myth in Greco-Roman mythology is the story of Eros (or Cupid) and Psyche. The story tells how Aphrodite (Venus) was jealous of Psyche’s beauty and sent Eros to make Psyche fall in love with one of the ugliest creatures on earth. Instead, Eros himself fell in love with her and carried her away.

They loved each other, though Eros would not show her his true identity. Eventually, her sisters visited and caused Psyche to believe that Eros was a monster who only meant her harm. She snuck up to kill him and discovered his beauty. She tried to apologize, but the heartbroken god fled and left her behind.

Eventually, Psyche spurned her sisters and wandered the world looking for Eros. She undertook several trials set by Aphrodite, and finally, she and Eros found one another again. Unlike many, their story finished happily with their love renewed and a valid Olympian marriage blessed by Aphrodite.

Since Psyche became a goddess-deification of the human soul and Eros was the personification of desire, their child, Hedone (Roman name Voluptas), personified sensual pleasure and delight. From here, we get the words hedonism and voluptuous.

What was the concept of eros, and how did it relate to the god?

The 6 aspects of Ancient Greek love were:

Agape – the feeling of love between spouses, parents, and children, and god. In Modern Greek, telling a partner or family member that you love them is se agapo.

Philia – the feeling of love between friends and equals. This is where we get modern phrases such as “bibliophile” – someone who loves books. In Modern Greek, the words philos and phili mean friend.

Storge – the feeling of empathy between a parent and an exhausting child or a fan and their favorite sports team. In Modern Greek, it’s usually used to describe affection.

Philautia – the feeling of self-love. This is both an essential part of the human condition and a moral flaw depending on how it is approached – self-obsession vs. being kind to oneself.

Xenia – the feeling of love and hospitality toward strangers. Modern English borrows the terms “xenophobe” and “xenophile,” one who fears and loves foreigners and strangers.

Knowing the multiple definitions of love is useful. It shows a vital role Eros and the other Erotes played to the Greeks. They already had a goddess of love in Aphrodite, but they needed more than that. “Love” is a multifaceted thing that cannot be limited to one goddess, no matter how possible. For this reason, multiple gods exist, each dealing with a different aspect of love.

Who was Eros, the Primordial God?

In earlier Greek myth, Eros was a god who existed before the Olympians and even before the Titans. He was a primordial creature along with Nyx (night) and Gaea (earth), other children of Chaos. This version of Eros was the fourth to exist, following Chaos, Gaea, and Tartarus.
Other versions have him as a child of Nyx. This version was a golden-winged god who bred with Chaos to result in the entire human race’s birth.

The later and more familiar version of Eros is incongruent with these myths. Some consider them two aspects of the same god, others two entirely separate gods. As it is, legends move on and evolve – and this was no different. However, the concept of love is consistently written as having existed very early into the creation of the universe.

Why are “Cupids” seen as tiny, winged babies?

The classical Greek Eros is a slender, youthful, handsome man. Still, as the Roman Empire expanded, Cupid was often depicted as a young, chubby boy. When Christianity became the dominant religion, this iconography was associated heavily with the baby Jesus and the duality of heavenly and earthly love. Interestingly, some Middle Ages Christian scholars also referred to him as a “demon of fornication.”

As a result, we have the Cupid or cupids we know from pop culture – a far cry from the original Eros, son of Aphrodite! It is because of this bond that the childhood depictions began. In art, Cupid is very often depicted as a child by his beautiful mother’s side, ready to help her and be nurtured by her.

How was Eros related to the Olympians?

As Ares and Aphrodite’s child, Eros was the grandson of Zeus and a nephew or great-nephew to the other Olympians. He was close to his mother. However, like all Olympian relationships, his others weren’t always straightforward.

Eros had a particularly strained relationship with two gods. The first was his uncle, Apollo, who was renowned in myth for his failed love affairs. The second was Artemis (Diana), Apollo’s twin and Eros’s aunt, who also favoured the bow and arrow but had sworn herself to spurn men and sexual romance. Therefore, she saw Eros’s use of the same weapon as almost sacrilegious and an insult to everything she stood for.

His grandfather, Zeus, helped him to grant Psyche immortality and allowed their marriage. However, he only did this in exchange for help with future romances of his own.

Eros is an exciting figure precisely because he only really features in one myth as a significant character. Aside from that, he’s only an attendant of Aphrodite, who always does her bidding. The distinctions between types of love are of particular interest to scholars and philosophers both past and present.
While eroticism is somewhat negatively associated in modern parlance, Plato actually declared eros as a deep love of the beauty within a person. By following intimate love, people were started on a path that eventually discovered the beauty inherent in the entire universe.