Skip to content
Home » 12 Enemies and Rivals of Poseidon: Who Are They? 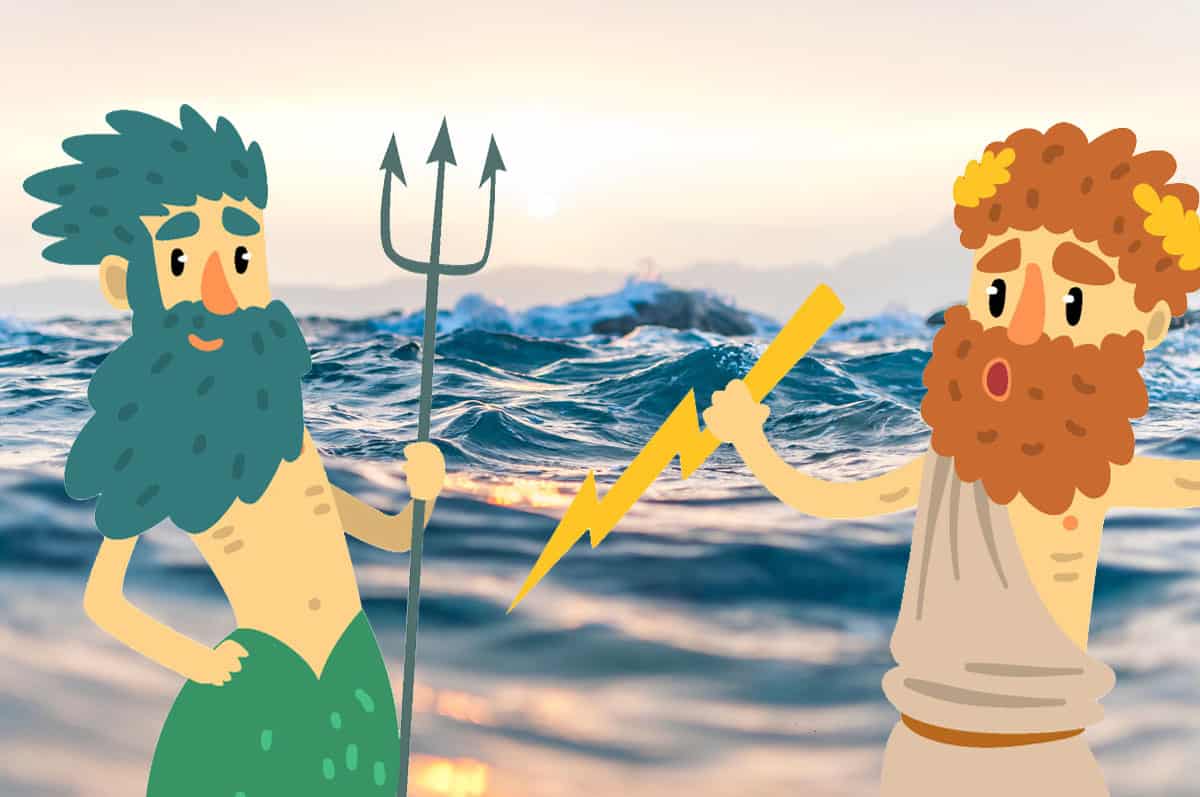 Poseidon, who was the god of the sea and oceans, earthquakes, storms, and horses, collected several rivals and enemies over his immortality. Some were friendly, and some less so.

With a temperament to match his specialties – as stubborn, proud, and potentially deadly as all of them – it’s no wonder he found himself in competition or enmity with gods and men alike!

Since twelve was significant to Ancient Greek religion, this list covers twelve of Poseidon’s most interesting rivals and/or enemies in Greek myth. Friends, enemies, family, or otherwise – all of these people got on the wrong side of the sea!

The Enemies, Opponents and Rivals of Poseidon

Poseidon’s rivalry with Zeus’s daughter is perhaps his most famous. The two competed to become the patron god of the city now known as Athens. Poseidon pieced the ground with his trident and drew up a fountain of saltwater from the earth. However, the human’s preferred Athena’s miracle – the first olive tree.

As a result, she won the contest. Poseidon responded by trying to block the entrance and exits to the city with rocks in anger and retaliation! Displaying his incredible pettiness and temper, he also sent a flood to the Attic Plain as retribution for the humans making the wrong choice.

Like any brothers, Zeus and Poseidon argued. A lot. About everything. They shared several lovers as well as potential parentage for children, and they had to draw lots to see who got to be the King of the gods! Zeus won the grand prize of the heavens, Poseidon the sea and earth, and Hades was relegated to the Underworld.

Poseidon was usually loyal to Zeus overall, but in one story, he did team up with Hera to try to overthrow the King of the gods. Zeus’s wife recruited several of the Olympian gods, including Apollo and Poseidon, in an attempt to replace Zeus as King and overturn some of his edicts. However, Zeus caught them, and Poseidon and Apollo were punished by being sent to build the walls of Troy. Hera’s punishment was a bit more severe!

The Odyssey tells of how Odysseus blinded Polyphemus, the one-eyed giant who ate several of his men. Unfortunately, Polyphemus also happened to be Poseidon’s own son by the nymph Thoosa. The death of his son, despite the giant’s crimes, left Poseidon pretty upset!

In retaliation, Poseidon chased Odysseus with storms and earthquakes for eight years, delaying his return home to Ithaca. Poseidon also punished those who helped Odysseus, including the Phoenician people, whose ships he turned to stone!

Odysseus had to undergo one final voyage at the end of this in order to finally assuage Poseidon’s wrath. Though he eventually satisfied the god’s anger and bloodlust, Odysseus always had to be careful from then on while going on sea voyages less it all began again.

Nobody would ever accuse the Titan Kronos of being a great father. He rose to the prime position in the Titan hierarchy by overthrowing his own father, Ouranos. After that, he spent his life worrying about his future children potentially doing the same to him.

His solution was to swallow each of his children by the Titan Rhea – Hestia, Hades, Demeter, Poseidon, and Hera. He failed to eat Zeus, who eventually broke his siblings free and led them all to war against the Titans. The brothers and sisters took up arms and drove the Titans back, taking up residence at Olympus and entering the era of Greece in which their mythology was recorded.

With his powers and his trident, Poseidon was a deadly fighter in the war and instrumental to the Olympians’ victory. He was rewarded with the domain of the sea and the earth for his prowess in battle. He swore loyalty to Zeus as his King, though the two didn’t always see eye to eye on everything.

Though the oldest brother, Hades was often the one who got the short end of the stick! While Poseidon and Zeus remained on Olympus, Hades was put in charge of the Underworld despite his initial lack of enthusiasm for the part.

The friendly rivalry between the two oldest Olympian brothers comes from their similarities. They share a quick temper and a taste toward material objects. Both of them were often shown as being rather tired of the actions of their brother, Zeus – though, notably, Poseidon was most likely to go along with the King!

This King prayed to Poseidon to justify his ascension to the throne with a sign. In response, Poseidon sent a white bull from the sea, binding Minos to sacrifice the animal in Poseidon’s honor. However, Minos liked the bull that he kept it. He located an inferior brown bull and tried using that as a substitute to offer instead!

Poseidon was not pleased. Rather than cursing Minos directly, he turned his fury on the queen, Pasiphaë. She fell madly in passionate love with the white bull. She felt compelled to mate with it, and so had a cow made for her to hide inside. After the mating, she became pregnant. Her child, Asterion, was half-man and half-bull and became known as the great Minotaur of the Labirynth built by the legendary inventor Daedelus.

After Hera’s failed rebellion, Poseidon and his nephew Apollo were punished by Zeus and sent to Troy, where they built the great walls of the city under Laomedon’s command. However, after they had finished their work, Laomedon refused to give them the rewards he had promised.

The gods responded vengefully. Apollo sent a pestilence to the entire city, while Poseidon drowned many in a great flood. Shortly afterward, both gods fought on the side of the Greeks in the Trojan War.

8. Medusa, Stheno, and Euryale, the Gorgons

Medusa was a human woman who was raped or seduced by Poseidon on the floor of a temple of Athena. In her rage, Athena punished Medusa and her sisters Stheno and Euryale by transforming them into the hideous monstrosities known as the Gorgons.

Poseidon was not punished for what he did to Medusa. His actions resulted in her pregnancy, and after she was killed, his sons Pegasus and Chrysaor emerged from her neck. Pegasus then became a servant of the gods and demigods.

9. Polybotes, Giant and Child of the Titans

Polybotes was a giant, the son of the Earth (Gaia) and the Sky (Ouranos). After a transgression from the giants against the Olympians, the two sides took up arms in a war known as the Gigantomachy.

During this war, Polybotes and Poseidon became direct rivals and battled furiously until the sea god was victorious. He won by crushing Polybotes with an island, though some versions of the story say he threw his trident first and missed, creating a holy island where it landed.

Cassiopeia was a beautiful woman who was bitter and vain, and her hubris caught the attention of the gods. She often bragged about how she and her daughter Andromeda could outshine the beauty of any Olympian. Poseidon turned his wrath upon the whole Aethiopian kingdom, either by flooding or by sending his sea monster, Cetus, to destroy it.

Hoping to save the land, Cassiopeia visited an oracle who told her that the only way to sate Poseidon’s wrath was to sacrifice her daughter. Cassiopeia chained Andromeda to a rock and left her to drown. She was saved and married by the hero Perseus.

Poseidon then punished Cassiopeia for her actions both against him and Andromeda by chaining her to a throne in heaven forever, creating the constellation. Her punishment was meant to mimic Andromeda’s ordeal, though sometimes Cassiopeia is portrayed as relaxed and even holding a mirror to highlight her vanity.

Poseidon, angered by her victory, cursed the rivers of the brothers so that their rivers only flowed during the rainy season. In some stories, he also flooded the land with seawater and only retracted the waters after Hera convinced him. He gained the nickname “the Flooder” after these actions!

Erechteus II led the people of Athens in their war against the people of Eleusis. The Eleusinian leader was Eumolpus, a bard-king and a son of Poseidon. Erechteus slew Eumolpus after the Athenians won the battle.

Poseidon immediately sought revenge, facing Erechtheus on the battlefield. He speared the King of Athens with his trident so powerfully that he drove him deep into the bowels of the earth, ending his life.

Poseidon was quite the irritable god and was forever getting into scraps and battles with either his fellows gods or some poor mortal down on earth. Consequently, as you can see, he made a lot of enemies along the way.

If you feel we have missed anyone important then let us know below.