Skip to content
Home » 25 Facts About Isis from Egyptian Mythology 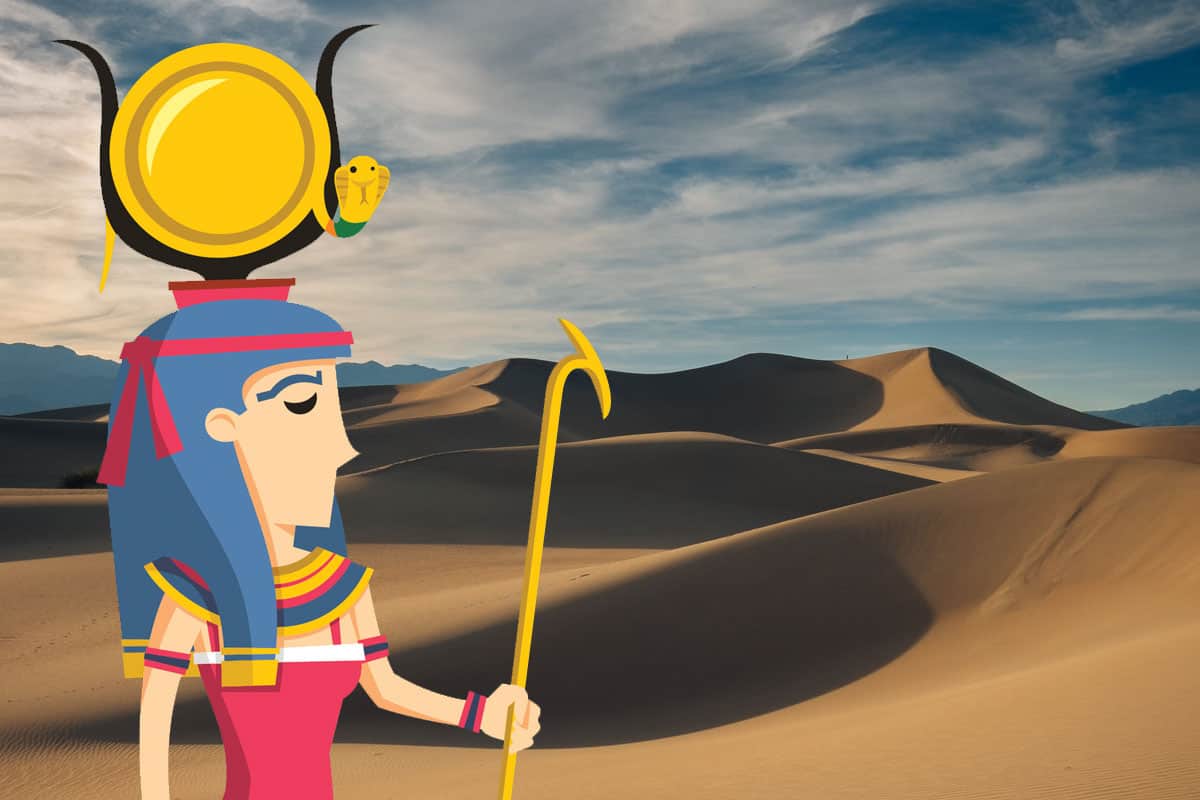 Isis, the Ancient Egyptian goddess of magic, family, and many other things, is very well known, but these are some fun facts you may not know. She was the queen of heaven, the sister of Set and Nephthys, the sister and wife of Osiris, and the mother of Horus.

She is an important figure in Osiris’s resurrection myth, as it was Isis who ensured that all parts of the god’s body were found so that he could be reborn. She experienced a rebirth of her own, starting as a minor deity and growing into something enduring.

Facts About Isis from Egyptian Mythology

#1 – Isis ensured her husband’s resurrection by making him a new wooden penis.

When Set killed Osiris and sprinkled the god’s body all over Egypt, his phallus ended up in the Nile, where it was eaten by a fish or crocodile. Isis made him a new one so that his body was complete. Ancient Egyptian religion believed that the body must be complete to achieve resurrection.

#2 – Isis had many other names depending on her role.

If Isis assisted Osiris in the Underworld, she became known as Ament, meaning “the hidden one.” Ament’s duty was to aid souls on their journey toward the next life.

#3 – Amulets bearing the name or image of Isis were important.

Isis alone helped keep secrets and simultaneously guard people against the ill-effects of lies. An image of Isis nursing her son would protect a mother and child.

#4 – Isis was often personified in tandem with other deities.

One of the most common of these was Hathor, and Hathor-Isis was associated with childbirth and marriage. Her symbol was a cow, as it was Hathor’s sacred animal. Hathor also sometimes had a cow’s head.

#5 – Isis and Nephthys were symbolized by birds.

The sisters, who were close despite Nephthys’s marriage to their brother Set, were shown as swallows or kites. The ibex was also crucial to Isis.

#6 – The Greeks and Romans associated Isis with their goddesses of wisdom.

The Ancient Greco-Egyptians considered Isis an aspect of Athena. When Isis’s cult began to spread during the Roman Empire, she was accepted as Athena’s counterpart or that of the Roman Minerva.

#7 – Isis’s husband was her brother, and their sister married their other brother.

#8 – Cleopatra VII, Queen of Egypt, was considered a living embodiment of Isis.

She served faithfully at temples of Isis and credited the goddess with her shrewdness and intelligence. Many women became followers of the cult of Isis as a direct response to their admiration of Cleopatra.

#9 – Isis once enchanted a harpoon as she feared her son would drown.

When Set and Horus warred, Set pinned his nephew under the water with a harpoon. Isis withdrew it with her magic and sent it into Set, who manipulated her into releasing him too. Horus beheaded her in his anger and was punished dreadfully, but mother and son eventually reunited.

#10 – Ancient Egyptian astrologers described Isis as a companion of Orion.

She was represented by the star that the Greeks knew (and we know today) as Sirius, the Dog Star. Orion itself was an aspect of Osiris.

#11 – Her love as a mother once brought Horus back to life.

After Osiris’s death, Isis and her infant son fled before Set could find and kill the child. While Horus was hidden, he was stung by a scorpion and died. Isis cried and begged, and the god Thoth responded to her pleas and helped her bring the child back to life.

#12 – Isis’s birthday was a lucky festival in Ancient Egypt.

#13 – As well as Athena, Isis was associated with several other Greek deities.

Isis’s Greek names and aspects included Aset or Eset and Persephone, the goddess of the Underworld. Osiris and Isis were very different in personality, story, and temperament than Hades and Persephone. Their Underworlds operated differently, too. However, they were associated as different aspects of one another.

#14 – Scorpions once served as Isis’s escort.

Isis was poorly treated when seeking shelter while she was fleeing with Horus. Her scorpion escort decided to get revenge on her host by poisoning and killing the woman’s son. When Isis saw what had happened, she took pity upon the woman and boy and brought the child back to life.

A throne hieroglyphic is an integral part of Isis’s name, and she wore a crown of the same shape. She was heavily associated with Egyptian royalty and was the symbolic mother of all pharaohs. The throne stood for the “st,” which was part of her Egyptian name. Her modern common name, Isis, is derived from the Greek interpretation.

Osiris created civilization while Isis taught the domestic arts and allowed humanity to thrive on its new home next to the Nile. She also ruled while Osiris was away and did so well that he left her in charge for years at a time. It was while she was teaching and ruling that she discovered the death of Osiris.

#17 – Horus was conceived while Osiris was dead.

Isis became pregnant with their son during the funeral procession of Osiris, and father and son never met until after Osiris’s resurrection. Isis made sure to imbibe a deep love of Osiris in her son’s heart, which eventually led to Horus challenging Set.

#18 – The Knot of Isis was an important symbol for those living and dead.

The shape is similar to an ankh and was named a knot as it was said to represent a knot tied on Isis’s dress. It is also sometimes known as the girdle of Isis or the blood of Isis. It offers protection to those who wear it. The pharaoh Tutankhamun had one on his sarcophagus.

#19 – Isis created and passed on knowledge of spells for everyday things.

One of these was a headache cure that she purportedly used to cure Ra. It was equally important to use the right ingredients and say the right magic words. Her spells were also significant during funerals.

#20 – True names were sacred, and Isis liked to collect them.

Isis was spending her life on earth and wished to re-join the gods, but Ra, the new king of the gods, refused. She tricked him into revealing his true name to her by causing a poisonous snake to strike him. It caused a wound that only she could heal, and she traded the remedy for the name. Afterward, she had power over Ra and returned to heaven.

#21 – Nephthys once borrowed Isis’s husband for the night.

Stories vary on whether it was with or without Isis’s consent, but Nephthys lay with Osiris one time. From that union came Anubis, the jackal-headed dog of the Underworld. Regardless of whether she had foreknowledge, Isis did not resent her sister and even helped her find and care for the child when Nephthys feared Set’s retribution.

#22 – When she was granted the powers of her son, Isis could have wings.

Isis and Horus were sometimes conjoined into a composite deity, usually represented by the mother with all of the powers and strength of the son as well as her own. This image was often reappropriated as an angel after the rise of Christianity and the outlawing of the old religions.

Serapis was a composite of the gods Osiris and Apis, favored by the Ptolemies after the death of Alexander the Great. Both he and Isis were made more Grecian in appearance and portrayed differently to make them appealing to the Greek population in Alexandria.

Along with Nephthys and Heket, Isis served as a midwife to a number of children in myth. She always took position before the mother, while Nephthys stood behind and Heket encouraged the haste of the birth.

#25 – Isis loved the sistrum and played its music for herself

The instrument was sacred to Isis as well as to Hathor, Amun, Bastet, and several other gods and goddesses. Isis’s personal sistrum was divine and could cause blindness from its sheer majesty if it was looked upon without proper preparation!

Isis is a truly fascinating Egyptian god. She played a very important role in many of the myths. If you feel we have missed any important facts or you just think some interesting extra fact should be included then let us know below.