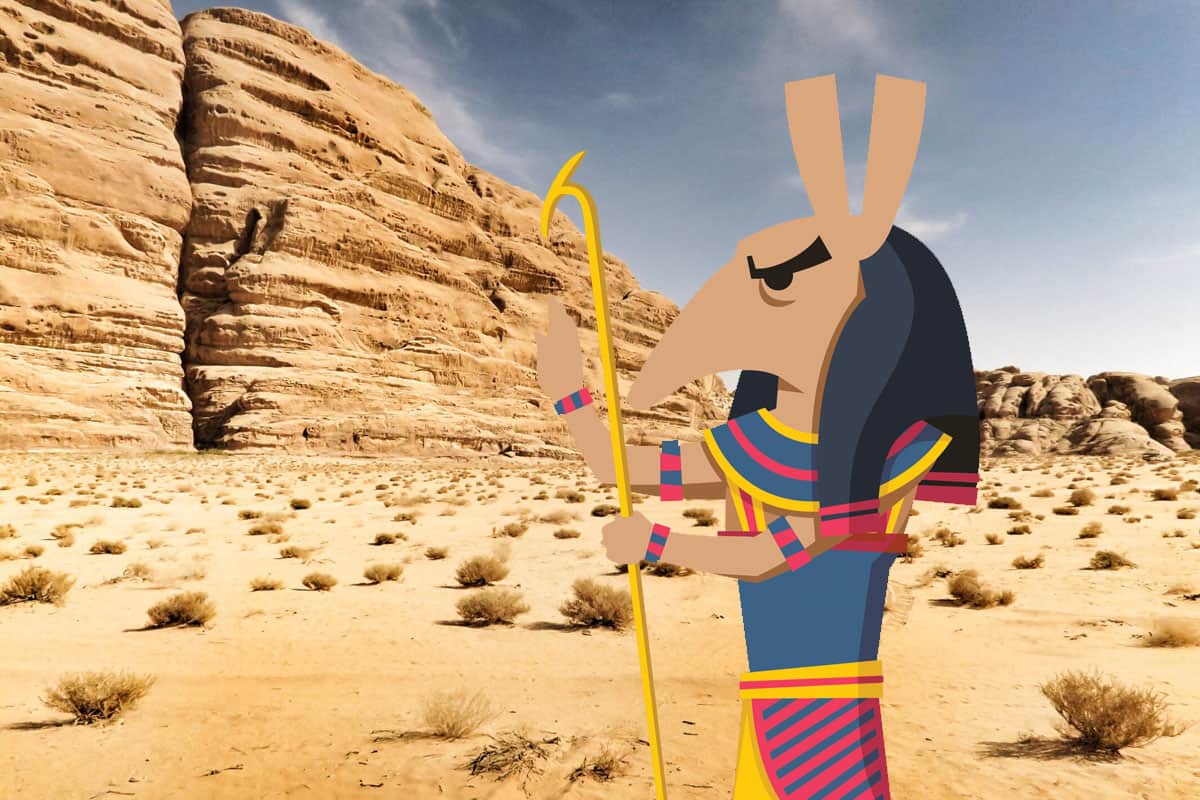 Set was the “bad guy” in Egyptian myth, most famous for murdering his own brother in a fit of jealousy. He was a god of evil and chaos. He was the red god to Osiris’s black, representing death and evil, where his brother represented life and rebirth.

The following twenty-five facts about Set cover some of the known and lesser-known aspects of the god. Of the 2,000 and more gods in the Ancient Egyptian pantheon, Set’s is one of the few names that has endured the test of time. Here are some reasons why that is.

1. The Egyptians had a Satan-like figure in Set.

Unlike Hades in Greek myth, Set was genuinely evil in Egyptian mythology. He murdered his brother Osiris out of greed and attempted to murder his nephew, too!

2. Set and the evil serpent Apophis were associated with one of the terrifying Titans by the Greeks.

During Greco-Roman occupation of Egypt, most important Egyptian deities were conflated with one or more of the Greek and Roman gods who were close in their specific domain, if not in personality. The two evil Egyptian gods were paired with the serpentine Typhon, one of the most dangerous creatures in Greek mythology.

3. After his defeat by Horus, Set became associated with pigs.

After his loss to his nephew, Horus, Set became a pig. Pigs were regarded with suspicion, and in day-to-day life, swineherds were often left out of important religious ceremonies. If a pig was the only thing you had to offer to the gods, your sacrifice was accepted but not considered particularly worthy.

4. Set’s wife was his sister, and their sister married their other brother.

5. Set murdered Osiris out of jealousy.

Several factors went into this jealousy. The fatherhood of Anubis was one, but Set also hated Osiris’s power and popularity. He also despised that their sister loved Osiris while his own sister-wife despised him. Set was also the older brother and saw it as remarkably unfair that Osiris should rule instead of him.

6. Set killed Osiris by tempting him with a pretty box at a feast.

The beautiful box was offered to any who could fit inside it. When Osiris tried, Set sealed it shut and doused it in molten lead to kill his brother. The box was thrown in the Nile. Isis retrieved it and buried it but Set discovered the burial place. He then dug up the box and dismembered the body into thirteen pieces, which Isis had to gather later.

7. Set’s birthday was an unlucky day in Ancient Egypt.

8. Set once got Isis beheaded through trickery.

When Set and Horus warred, Set pinned his nephew under the water with a harpoon. Isis withdrew it with her magic and sent it into Set, who manipulated her into releasing him too. Horus beheaded her in his anger and was punished dreadfully, but mother and son eventually reunited.

9. He tried to kill Anubis as an infant.

Anubis’s mother, Nephthys, was the sister of Osiris and Isis and married to their evil brother Set. When Nephthys bore Anubis, she feared for his life and hid him in the marshes – most likely as he was the product of an affair with Osiris. Nephthys hid him in the marshes, where he was rescued and protected by Isis. He was raised by both sisters.

10. Though undoubtedly evil, Set was not universally maligned.

His followers were treated fairly, and being in one of Set’s cults was not taboo. This was because his actions in harming Osiris, while evil, were the very basis for the central tenant of resurrection in Ancient Egyptian religion.

11. A foreign warrior goddess, Anat, was occasionally his wife rather than (or as well as) Nephthys.

Anat was a Syrian goddess brought to Egypt during an invasion of the Delta. She protected pharaohs during warfare, and although she was associated with the sky, her violence was her main attribute. She was also a wife to Baal or Reshef and was sometimes associated with Hathor.

12. Set was considered the equivalent of the Canaanite god Baal.

This all-powerful war god was much feared in the area surrounding Egypt, and the Ancient Egyptians happily conflated them both. His wife, Astarte, was also adopted into Egyptian religion and was sometimes Set’s wife.

13. Set did have positive emotions, too.

Isis used his heart against him during the contention of Horus and Set by disguising herself as a young woman and pleading with Set for help. Set agreed and was furious to discover later that he’d been tricked.

14. He once turned into a scorpion to kill a baby.

That baby was his nephew, Horus, whom Isis was attempting to hide in fear of his death. However, Isis’s magic combined with the help of Thoth was more powerful than Set’s, and Horus was revived.

15. Set dug up Osiris’s body after its burial and chopped him into bits.

These bits were then scattered across Egypt to prevent any chance of resurrection. Isis located them all except the penis, which was eaten by a fish. The fish may or may not also have been Set.

16. He sometimes had a twin who was day where he was night

Heru-Ur is not as popular or known as Osiris, Isis, Set, and Nephthys, but in some stories, he and Set were born on the same day and were the absolute antithesis of one another.

17. Set was linked with the planet Mercury

This was purely because of its color! Red, like blood and the dust of the desert, were very important to Set. Though he was associated with the planet astrologically, he was not associated with the Roman god of the same name or the Greek equivalent Hermes.

18. Nobody is really sure what the Sha or Set animal really is.

Set is often shown with an animal’s head like many other gods. It is generally accepted to be a made-up creature, though it shares traits with jackals, fennec foxes, greyhounds, and more. It is also called the Typhonic beast.

19. Several animals were associated with Set.

As well as the sha and the pig mentioned above, Set was also sometimes associated with donkeys, hippopotamuses, scorpions, crocodiles, wild boars, and antelope. He even once had a flamingo head!

20. Before the Osiris myth came to the forefront of Egyptian religion, Set was a protector.

He was sometimes the son of and always a protector of the sun god, Ra. He was often shown upon his barge as one of the honor guards right at the forefront while Ra traveled through the Underworld.

His violent and tempestuous nature meant that it seemed only natural for him to be associated with the dangerous floods and lightning of storms. He was also associated with several storm gods from other religions.

22. The name Set comes from the Coptic reading of the hieroglyphics in his name.

While Osiris and Isis are known by their Greek names, Set in Greek was Seth. Some other readings of his name are Sheth, Setesh, Sutekh, Setan, Setekh, and Suty. Any or all of them may have been used in different regions.

23. Set once got pregnant with a golden disk.

During their contentions, Set and Horus warred by targeting each other with their semen. Set started it, but when Horus retaliated by having his mother sprinkle his seed on some lettuce leaves, Set became ill and gave birth.

24. The war between Horus and Set lasted eighty years.

It involved several different instances of violence, trickery, and more. The contention only ended when Osiris received a letter in the Underworld and called a tribunal to put an end to it. Afterward, Set conceded kingship over the earth to Horus.

25. Horus was sometimes Set’s brother instead of Osiris.

This incongruousness didn’t seem to bother those who were writing the texts, though! In the versions where Horus is Set’s brother, their fight does not involve revenge but rather a straight battle between good and evil. In some texts, they are referred to as brothers and uncle and nephew on different pages!