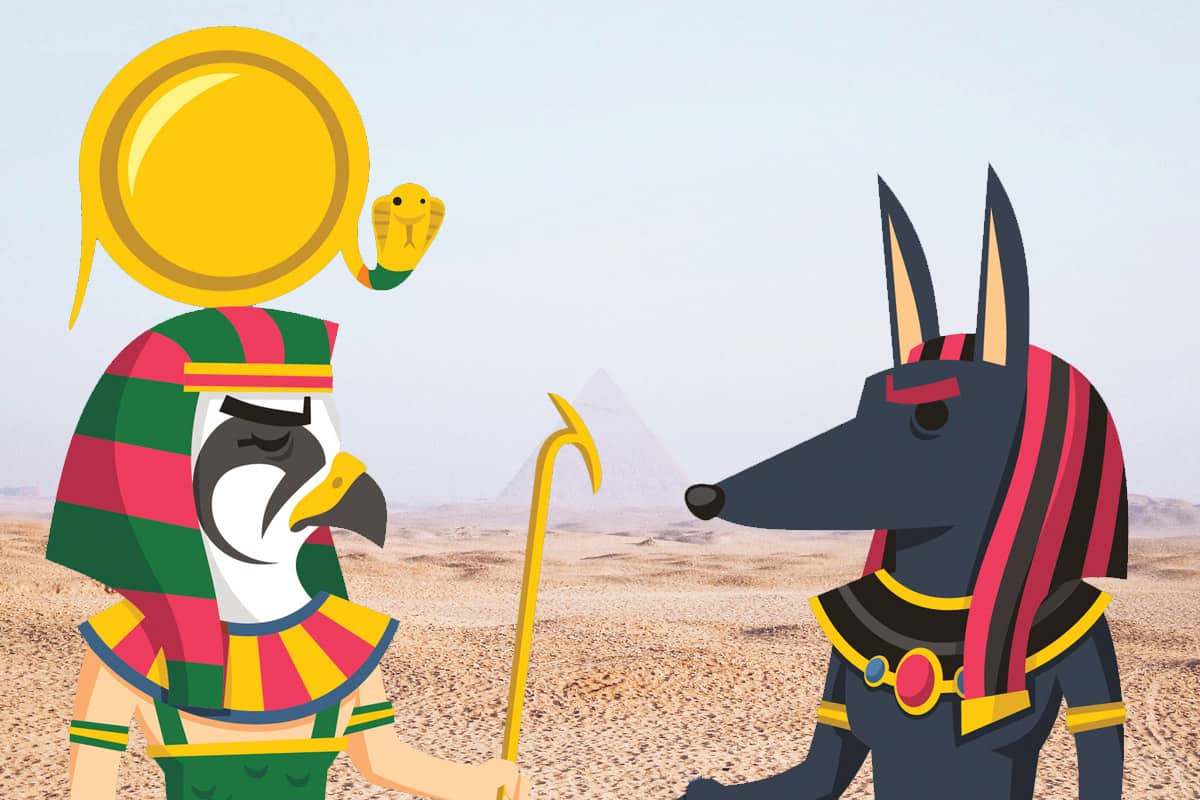 There were hundreds of gods and goddesses in the Egyptian pantheon, ranging from the tiniest household god to the all-powerful God of the Sun. One of the most interesting things about Egyptian mythology was that they also acknowledged the gods of other myths such as the mighty Baal – they just weren’t as important, significant, or powerful as their own!

Below, we’ve listed seven of the most powerful and awe-inspiring deities in Ancient Egyptian lore. Some of them you might already know, while some might be more of a surprise!

The Strongest and Most Powerful Egyptian Gods and Goddesses

He was portrayed as a man with a hawk’s head holding the sun, Amun-Ra was the combined being of Amun of Thebes and Ra, creator god and God of the Sun. The combination of the two mighty gods symbolized a combined Egypt, and he ruled over the other gods.

As Ra (or Re), he ruled the sky, earth, and netherworld. He had to travel through the latter each night and beat back evil to ensure good souls could be reincarnated. Ra was born of either the primordial waters of the cosmos or from the first lotus flower and played a key part in creation. His self-circumcision created Hu and Sia, God of authority, and goddess of the mind.

Ra’s main enemy was Apophis, the evil serpent god who ruled the realm of darkness and chaos. Ra combined with many other gods in different aspects, but Amun-Ra was one of the most powerful.

Even before they were combined, Amun was the most powerful deity of Thebes or Luxor. He was said to have fathered the children of many powerful Egyptian queens and served to bless agriculture. Many Egyptian kings also took his name as part of their own.

Astarte was a loan-god from the Canaanite religion. She was a consort of the all-powerful storm god Baal. During the New Kingdom, she became a wife of the God Set in Egypt. She was a moon goddess and a matriarch who protected and loved all of the people of her realms.

She was worshiped across cultures with her different names, including by the Hebrews before they turned to favor a single god. As Ashtoreth, she was celebrated across the Middle East. She was also a form of the Mesopotamian Ishtar and the Sumerian Inanna. In Egypt, she was often paired with the goddess Anat, who was another loan god who married Set and who was a fierce sky warrior.

Astarte had absolute knowledge of everything and was a perfect leader of people in life and in war. She could also fully understand every individual’s heart and intentions. She was a goddess of fertility, war, and sexuality. Depending on the worship and the period, she was sometimes conflated or combined with other Egyptian goddesses.

The lioness-goddess Sekhmet, a warrior, was often considered the same as or combined with Astarte. Even more common, though, was her conflation with the powerful goddess Isis.

#3 – Osiris, God of the Dead and Resurrection, Son of the Earth and Sky

Osiris was one of the four deities born to the earth god Geb and the sky goddess Nut. He was an extremely powerful god who had more titles to his name than any other single deity in the pantheon! He married his sister, Isis, with whom he had their son, the powerful God Horus.
Osiris introduced wine and agriculture to the people of the earth, and he was considered ‘eternally good.’ The most famous myth that surrounds him concerns his long-term war with his evil brother Set.

Originally, Osiris ruled the day and Set the night. The jealous Set wanted to claim both. So, he tricked Osiris into climbing into a box. Set murdered Osiris and scattered his dismembered pieces all over Egypt.

With Isis’s help, he came back to life after all of his body parts except his phallus were reassembled. Isis created him a new one. Because of this, Osiris became an important god who aided in resurrection and proper burial rites – both of which were extremely important to the Egyptians.

#4 – Isis, The Mother Goddess, Daughter of Sky and Earth

She was both the wife and sister of Osiris, she was the one responsible for bringing him back to life. However, many more myths surround the power and strength of Isis than only this! Isis was a goddess of magic who ruled over the mystical arts while her husband brought civilization to humanity.

She is associated with fertile land and her devotion to her husband, Osiris, and their son, Horus. Because of her role in protecting Osiris and breathing life back into him, she was also the patron goddess of all mummies.

The god Thoth helped Isis after she and Horus were taken captive by Set after Osiris’s death. She hid Horus in a papyrus thicket, but he was stung by a scorpion sent by Set, which killed the baby. Isis, with the help of her sister the goddess Nephthys and Thoth, was able to bring the child back to life.

She also showed great pity. A woman who had wronged her had her son killed as punishment. However, Isis decided that, as the child had done no wrong, he should live.

The Sun God Ra, who was the first husband of Isis’s mother, Nut, respected Isis greatly. She is often portrayed at his side as he ventures into the underworld.

Son of Osiris and Isis, Horus was one of the most powerful gods in Egyptian lore. He had the head of a falcon and the body of a man, and he ruled over both the sky and the underworld, mostly fighting off the enemies of his father.

After Osiris was killed, Horus warred with his uncle Set for over 70 years. At the end of this, the God of evil was defeated, and Horus reigned victoriously.

Horus had many titles and attributes to reflect his importance in Egypt, many of which were also used or adapted to use in Greece, the Middle East, and other nearby areas. Some of his most notable titles include:

A representation of the Eye of Horus was often worn either in make-up or on an amulet as a charm for good luck in life and blessed funerals.

#6 – Thoth, God of Writing and Knowledge

Thoth was a moon god who later obtained dominion over knowledge and wisdom. The animals most associated with him were the baboon and the ibis. Depending on the myth, he is either a moon god or the moon itself, and he is often conflated with Khonsu, son of Amun and Mut.

Thoth is a healer and a force for good who has helped Horus, Osiris, Isis, and Ra in various battles and tasks. He is said to have healed the damaged Eye of Horus, retrieved the Eye of Ra, and brought Isis’s son back to life.

He serves as an accompanier to Ra on the Sun God’s journeys into the underworld. He also collected knowledge and scribed spells to share with humanity.

#7 – Hathor, The Cow Goddess, Goddess of Love and Music

A favorite goddess of the Egyptians, she was the symbolic mother of every Pharoah. Every other goddess in the pantheon, even Isis, was paired with her and shared her power at some point.

She was the patron of something different in almost every area – miners in mining cities, agriculture in farming lands, etc. She was heavily associated with gold and had temples both within and outside of Egypt.

Hathor was the wife of Horus and the daughter of Ra. Her name means “house of Horus,” and she protected and housed her hawk-god husband. She protected children and could see the destiny of any newborn. She also served as a goddess of mortuaries. She protected the evening sun while Ra prepared for his journey through the underworld.

Because of her attributes as a goddess of music, dancing, fertility, and love, in Ancient Greece, she was seen as a version of their own love goddess, Aphrodite, with whom she shared an equally loving but vengeful nature. Like Aphrodite, Hathor could be terrible when angered or otherwise wronged.

The Egyptian gods and goddesses were a truly power bunch. They could wield power over the elements, nature and animals. They were both respected and fears by the ancient Egyptians.

There are many more interesting gods and goddesses to discover. If you find the time you should check out more on Egyptian mythology.