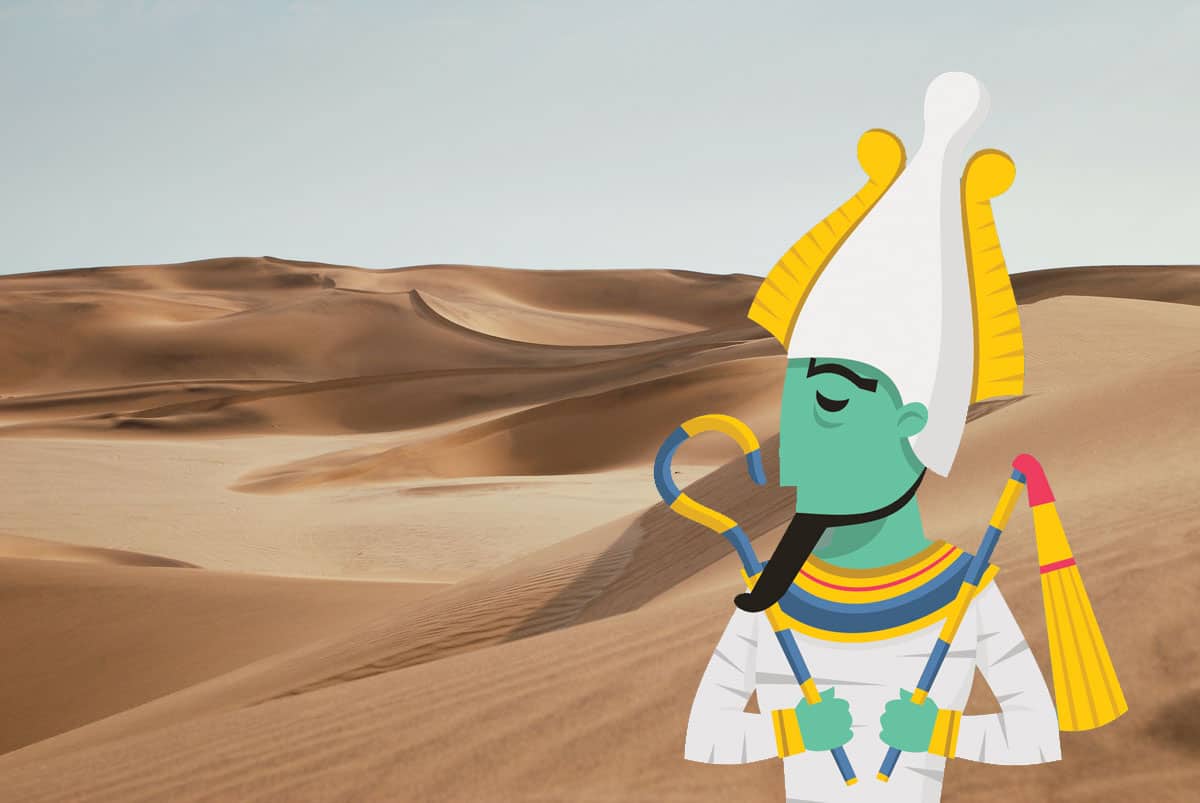 Osiris, the Ancient Egyptian god of the afterlife, fertility, agriculture, and many other things, is very well known, but these are some fun facts you may not know. He was the king of heaven, the brother of Set and Nephthys, the brother and husband of Isis, and the father of Horus and Anubis.

Osiris’s resurrection myth is a central tenant of Egyptian religion, as death and rebirth were sacred. He was slain by his evil brother Set, to whom he was the opposite. Where Set was darkness and cruelty, Osiris was benevolent and kind. He was considered eternally good.

When Set killed Osiris and sprinkled the god’s body all over Egypt, his phallus ended up in the Nile, where it was eaten by a fish or crocodile. His beloved wife made him a new one so that his body was complete. Ancient Egyptian religion believed that the body must be complete to achieve resurrection.

2. Osiris is portrayed with green or black skin, depending on his role.

When his skin was green, it represented rebirth and his job as king of the Underworld. His black skin was symbolic of the fertile soil of the Nile and was used in portrayals of him as an agriculture god. His brother and murderer Set, by contrast, was associated heavily with the color red.

3. Embalming was invented by Anubis for Osiris’s body.

His wife Isis and their sister Nephthys brought his body to Anubis, guardian of the Underworld. Anubis helped the women prepare his body. According to several myths, Anubis was also Osiris’s son by Nephthys.

4. Osiris’s wife was his sister, and their sister married their other brother.

5. Osiris’s birthday was an unlucky day in Ancient Egypt.

6. Horus was conceived while Osiris was dead.

Isis became pregnant with their son during the funeral procession of Osiris, and father and son never met until after Osiris’s resurrection. Isis made sure to imbibe a deep love of Osiris in her son’s heart, which eventually led to Horus challenging Set.

7. Under Hellenistic rule, Osiris was conflated with another god and named Serapis.

Serapis was a composite of the gods Osiris and Apis, favored by the Ptolemies after the death of Alexander the Great. Both he and Isis were made more Grecian in appearance and portrayed differently to make them appealing to the Greek population in Alexandria.

8. To the Ancient Egyptian astrologers, Osiris had an aspect amongst the stars.

The constellation we know today as Orion was heavily associated with Osiris. The star we know as Sirius was an aspect of Isis, who was his companion and his wife. In this form, he was syncretized with the god Sah, who made up the constellation with his body.

9. The sun god Ra was a close associate of Osiris.

In the funerary myth of the caverns, Ra met a different figure in each of a series of caves and brought light to them. He met Osiris and Aker, a two-headed lion god, in the third cavern. Osiris was so moved by Ra’s light that his phallus became erect.

10. Osiris was associated with a particular type of coffin.

Middle Kingdom coffins were wooden and rectangular. The elaborate anthropoid versions with which modern portrayals are more familiar came later and were considered pleasing to Osiris. They are based on the method by which Set murdered his brother.

11. Set murdered Osiris out of jealousy.

Several factors went into this jealousy. The fatherhood of Anubis was one, but Set also hated Osiris’s power and popularity. He also despised that their sister loved Osiris while his own sister-wife despised him.

12. Osiris ended the contention of Horus and Set.

The two were locked in a seemingly eternal battle, but Osiris came up from the Underworld and ordered them to stop under threat of unleashing all of the demons of the Underworld upon the earth. After this, Horus became king of the earth.

13. Fish were both essential and taboo because one ate Osiris’s penis.

It fell into the Nile when Set scattered his body, and the fish (or, in some versions, a crocodile) swallowed it. However, fish were also important for use in medicine, leading to a duality in their perception.

14. Osiris was associated with two main Greco-Roman gods during their rule over Egypt.

15. Set killed Osiris by tempting him with a pretty box at a feast.

The beautiful box was offered to any who could fit inside it. When Osiris tried, Set sealed it shut and doused it in molten lead to kill his brother. The box was thrown in the Nile. Isis retrieved it and buried it but Set discovered the burial place. He then dug up the box and dismembered the body into thirteen pieces, which Isis had to gather later.

16. The righteous dead became one with Osiris on their path to the next life.

Those who successfully completed their journey through the Underworld were granted some power of the gods from Osiris. Part of this meant that they were all-seeing, and several letters were written both to Osiris and to the dead as pleas for help and justice.

17. Osiris had over one hundred names.

Names were sacred to the Ancient Egyptians, and the Book of the Dead describes how only some of Osiris’s could ever be known to humanity. Names held the essence of a person and discovering someone’s true name could give you unlimited power over them.

18. Osiris was called the Lord of the West.

Those dead who had completed their journey were referred to as westerners, and Anubis was the foremost of the westerners. This was because the dead traveled through the Underworld from the beginning at the east to where Osiris waited in the west.

19. Ancient Egyptians worshipped different gods from the pantheon, but they all worshipped Osiris.

There were over 2,000 gods in the pantheon at any one time, but only Osiris united them with their goal of rebirth. Funerary rites were incredibly sacred to all of Egyptian religion.

20. The willow tree is a symbol of Osiris.

This is because, when he was buried but before he was dismembered, a willow tree’s roots grew around his burial place.

While he did this, Isis introduced magic along with sewing and weaving. Osiris and Isis ruled over humanity as equal partners, and Osiris often left Isis in charge when he traveled. It was during one of these trips that he was tricked and murdered by his brother.

22. His feathered crown was called an Atef and symbolized his rule of the Underworld.

The colorful feathers were taken from ostriches and were the same kind of feather as the one used in the weighing of the heart ceremony, which judged whether a person could be resurrected into the next life. The atef was also used as a hieroglyph (atf).

23. Osiris is a Greco-Latin version of the god’s actual Egyptian name

From hieroglyphics, the name would be best transliterated as Wsjr or Jsjrj. However, since there is no indication of vowels, it is hard for Egyptologists to agree on a pronunciation. Some modern suggestions include Ausar, Wesir, and Osir.

24. The most sacred city in Ancient Egypt was a cult center for Osiris.

Abydos, on the west bank of the Nile, was said to be his original burial place. It was a location for tombs of several critical dynastic figures who wished their resting places to be close to that of the god. It was located near modern-day Sohag.

25. The Djed pillar was an essential symbol of Osiris and was called his spine.

Known as the spine of Osiris, the pillar represented resoluteness and stability and also Osiris’s triumph over death. Grain was sometimes hung from the pillar, referring to his status as an agricultural god.