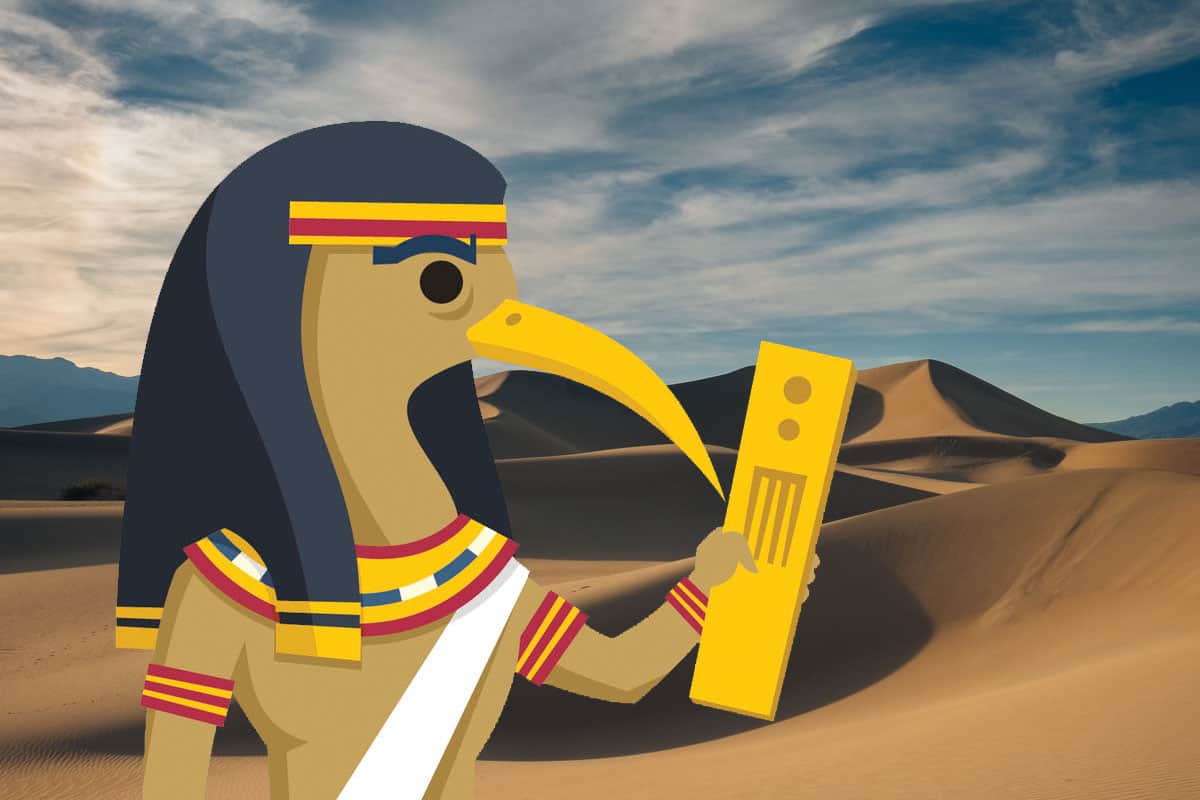 Thoth was one of the most powerful beings in the Ancient Egyptian pantheon, and played a hand in the adventures and stories of many other gods. Named Djehuty in Egyptian (or something similar), Thoth was revered for his knowledge and wisdom.

He was never a king of gods, but rather a powerful servant who was somewhat apart from the monarchy.

The following facts tell some of the interesting stories about this ibis-like god. Some of them you might know, while others might come as more of a surprise! More than anything, though, Thoth was just incredibly interesting!

A Few Wondrous Facts about the Egyptian God Thoth

1. Thoth was the god of many things

His realms included wisdom, writing and hieroglyphics, science and magic, art, judgement and judging the dead.

2. He had various different animal portrayals

His head was usually an ibis, though it was often a baboon. He also appears as dog-faced, fully humanoid, a full baboon, and with a lunar disc.

3. He added five days to the year to let the gods be born

The sky personification goddess Nut was barren on the 360 days of the year. Thoth helped her by adding five more days. These days were the birthdays of Osiris, Isis, Nephthys, Set, and Her-Ur (Horus the Elder)

4. Thoth had a few different wives or consorts

Each of these had a different role

5. His cult center was Hermopolis and he was considered by Hellenistic rulers as an aspect of the Greek Hermes.

In Ancient Egyptian, the name of the city was Khemenu, meaning ‘eight town’ after the eight primordial gods of the city.

6. He was the scribe of the gods

Thoth recorded all of the important sayings and doings of the gods, which was why the Greeks related him to Hermes, their messenger.

7. Thoth was the inventor of several academic categories

As well as language, words, and writing, Thoth invented the alphabet, astronomy, astrology, number science, mathematics, surveying, geometry, botany, medicine, theology, government and civilization, reading, and speech. He was also the inventor of all other science, religion, magic and philosophy. He shared many of his discoveries with his consorts.

During Hellenic Egyptology, Thoth was known as the author of every work of knowledge in the world, either directly or through a human medium.

8. Hermes Trismegistus (another name for Hermes-Thoth) was often associated with the Hebrew/Jewish figure, Moses, who freed the Jewish slaves from Egypt in the biblical story of Passover.

This theory was first put forth by Artapanus of Alexandria, a Jewish Egyptian, who considered the combined god and the prophet Moses one and the same. Right up until the Renaissance, many writers agreed with him or at least saw the two as contemporaries with similar points of view.

9. The Coptic month Thout was named for Thoth

It was the first month of the year and prescribed the Thoth as the inventor of dates and seasons. This month ran from modern-day September 11th to October 10th.

10. Alongside Osiris and Anubis, he helped to judge souls in the afterlife

When a human heart was weight on the scale of Osiris’s wife, Ma’at, to determine if it was overburdened with sin, Thoth would take notes on the measurements and on the human’s life and deeds.

11. Thoth was usually his own son and his own father

While many original gods were born from the primordial sea of nothing, Thoth created himself entirely from nothing.

In this story, when Set ingested the semen of Horus on a lettuce leaf, the seed quickened into a baby. After some time, Thoth emerged fully formed and adult from Set’s forehead, much as the wisdom-goddess Athena was born from Zeus in Greek mythology.

13. Scribes would make a tiny sacrifice to Thoth whenever they sat down to work

Before they began their writing, scribes would drop one dot of ink on the side in Thoth’s honor to ask the god to be with them in their work.

14. Thoth’s healing magic was intrinsic to the central Egyptian myth of Osiris’s death and resurrection and his son’s ascension to the throne.

After Set killed Osiris, Osiris’s husband and sister Isis begged Thoth for help. Thoth presented her with several spells and by adding their magic together she was able to resurrect Osiris and conceive Horus.

Later, Horus was struck on the heel by a poisonous snake. The infant god died, but Isis again appealed to Thoth, who again aided her magic with his own, bringing the child back to life.

After the war of Horus and Set, Thoth acted as a judge and an arbitrator between the gods. When Horus ascended the throne of earth, Thoth remained his close counsel.

15. Thoth was also the judge of the gods

Whenever the gods were out of balance, Thoth (along with Ma’at or one of his consorts) was the one who was trusted to impart fair justice. His decisions were invariably the morally and logically correct path to take.

16. In later myth, when Ra was king, Thoth was his chief advisor

When Ra’s daughter and consort Hathor went missing, Thoth was the only one who Ra trusted to bring his beloved back to his side. Hathor often fled to distant lands, but she usually came back with Thoth willingly.

Apophis was the arch-rival of Horus (or Ra). When the king of the gods traveled through the underworld at night on his solar barque, Thoth traveled by his side and helped him defeat this dreadful threat.

18. Thoth was linked to fate

He was not a god of destiny, but his omniscience meant that he, invariably, knew the destiny of all humanity. Shai (or Shait), the god/goddess of fate, shared this responsibility. Others involved Hathor (in her form as the Seven Hathors), Mesenet (a birth goddess), or Renenutet (who was responsible for the ren part of the soul).

19. He was originally a moon god

His lunar associations remained throughout his centuries of worship, though they were somehow subsidiary when compared to his wisdom and magic. He was often associated with the moon god Iah (also known as Jah or Aah)

20. Thoth had several other names (or possibly titles).

The most famous of these were A, Sheps, Lord of Khemennu, Asten, Khenti, Mehi, Hab, and A’an.

21. At his cult center, many ibis were ritually killed and mummified

Thousands of mummified sacred animals were buried in Thoth’s honor

22. A Sixteenth Dynasty Pharoah named himself for Thoth

His name was Djehuty and he ruled for three years. Thoth’s likeness also appeared in part in the names of many other pharaohs, whose monikers meant things like “Thoth’s son” or “protected by Thoth”.

23. Thoth had a special book that contained all of the secrets of the universe

The Book of Thoth was one of the 36,525 books in the House of Life that were purportedly directly written by Thoth himself. It was made up of forty-two volumes which comprised information on the heavens, earth, underworld, magic, the cosmos, and every other aspect of life and death in the universe. There was also a fictional storybook with the same name published during the Ptolemaic period.

24. His worship began in Lower Egypt in Pre-Dynastic Egypt and continued well into the Ptolemaic period, the last Dynasty.

An approximate timeline, therefore, places continued worship of Thoth to have started any time around 6000 BCE to 3150 BCE, and ended sometime between 323 BCE and 30 BCE. That means that Thoth was continually worshipped for between three and six thousand years, longer than almost any other deity (Egyptian or not!)

By comparison, the Jewish god who was later worshipped by Christianity, Islam, and other Abrahamic offshoot religions, appears in recorded worship less than four thousand years ago.

25. Thoth had a mansion in the underworld where he allowed souls to rest and learn new spells to help them into their journey forth into paradise

This Mansion of Thoth was filled with magic and spells of protection for the souls of the dead.

26. The African sacred ibis, the particular bird associated with Thoth, were bred near his places of worship

The Egyptians kept the population of native ibises high for the sake of sacrifices to Thoth. However, though it was originally North African, the bird is no longer found naturally in Egypt or the northern continent.

Though not the most well-known god from the Egyptian pantheon in modern Western popular culture, Thoth was an extremely important member. His influence touched almost all of the major gods, and through his machinations the world remained in balance that would not have existed without his powerful magic. 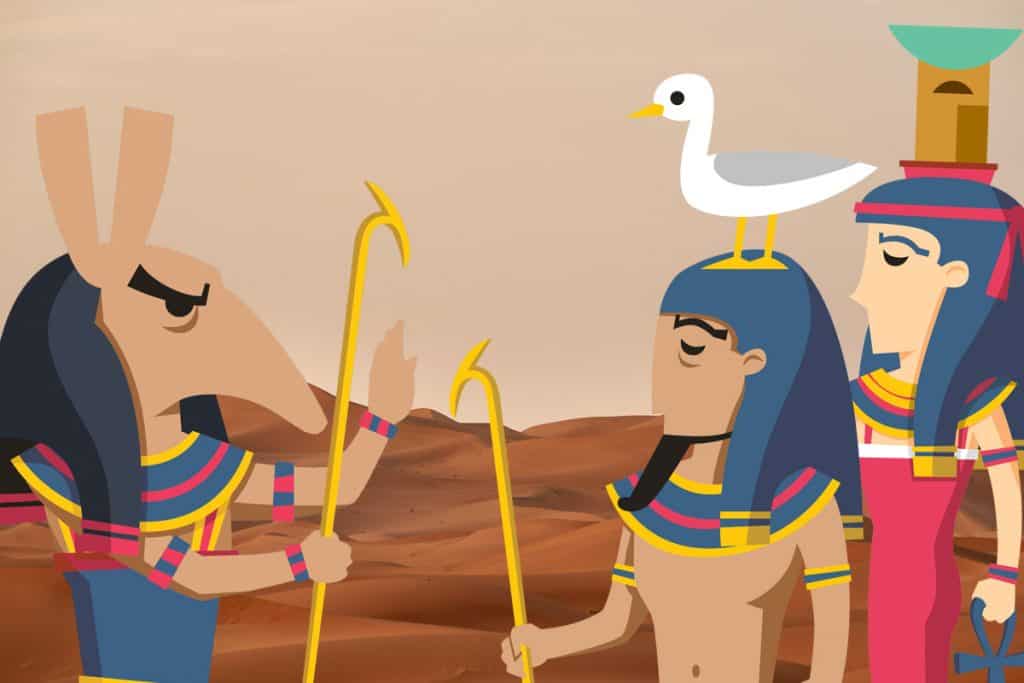 9 Ennead Gods in Egyptian Mythology: Who Were They?

The Heliopolitan Ennead (from the Greek ennea, nine) was the earliest creation myth in Ancient …

While it’s comforting to think that the gods are on your side, that was definitely …