Skip to content
Home » 12 Disguises of Zeus: What Were They? 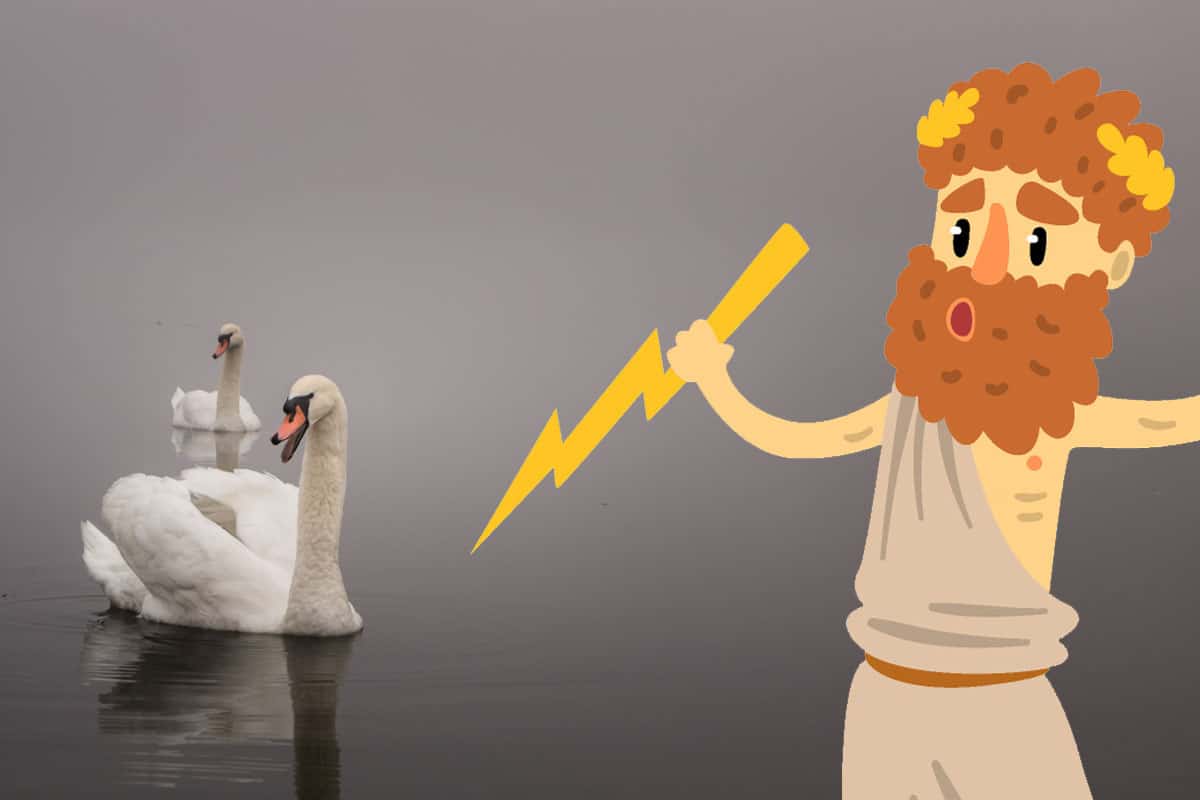 God of thunder and the skies and king of the Olympians, Zeus was a pretty recognizable figure to the Ancient Greeks.

When you’re one of the most powerful beings in the universe, it can be a bit difficult to get around without being recognized – but that definitely didn’t stop Zeus from trying!

Though Zeus occasionally took a human guise to check in on people on earth, his most common reasons for hiding his appearance were to seduce people – divinities and mortals; men and women alike. The following disguises were all used on Zeus’s endless pursuit of women.

Some Weird and Wacky Disguises Adopted by Zeus

1. The Eagle (Aegina and Ganymede)

Zeus fell for and abducted Aegina in the form of an eagle and carried her to an island near Attica which then took her name. Though her father pursued her, Zeus kept him away with thunderbolts. Aegina and Zeus’s son, Aeacus, was an immortal king of the island who helped build the walls of Troy. His son, Peleus, was the father of the hero Achilles.

Ganymede was the most handsome young man of his age, and Zeus decided that he must make the youth his personal cupbearer and lover. Taking the form of an eagle, he flew down to where the boy was sheep and carried him off to Olympus. He made him immortal and honored him above all other men, causing jealousy in Zeus’s wife Hera. Zeus then paid Ganymede’s father the equivalent of a bride price to compensate for the loss of his son.

The beautiful young Aetolian princess, Leda, was already married, but Zeus desired her anyway. He saw her by a lake one day and put his plan into action, disguising himself as a swan and calling an eagle to chase him. When Leda saw the swan being pursued, she took him into her arms to protect him, after which Zeus had sex with her.

Leda would sleep with her husband that same night, and later lay two eggs. From one would hatch her daughters, Clytemnestra and Helen of Troy, and her sons, Castor and Polydeukes (Pollux). The former of each pair were mortal and the children of Leda’s husband, while the latter were semi-divine children of Zeus.

Zeus’s daughter, Artemis, traveled with a group of all-female attendants who had sworn off sexual liaisons with men. A favorite of Artemis was Callisto, a nymph or princess who was probably also Artemis’s lover. Callisto was very beautiful, and so Zeus desired her.

Knowing he would never gain Callisto’s consent, Zeus took the form of Artemis and approached. Callisto made love to ‘Artemis’, who only revealed that he was actually Zeus after the fact. Callisto became pregnant from this and have to leave Artemis’s side. She was transformed into a bear by Hera, and her son, Arcas, was a bear hunter.

Danaë, princess of Argos, was incredibly beautiful. Her father heard a prophecy that his grandson would overthrow him, and so became obsessive over Danaë’s maidenhood. He locked her in a tall bronze chamber with no way in or out to prevent men from seeing her.

Zeus, however, desired her regardless. He transformed himself into a shower of gold or golden rain, which flowed through her prison and into her womb. From this union, Perseus was born – the future slayer of Medusa and one of Ancient Greece’s greatest heroes.

Europa was a descendant of Io, a previous lover of Zeus who he was transformed into a bull before fleeing to Egypt. Zeus later desired Europa, too, and so took the form of a white bull and hid amongst her father’s herds. Europa saw the bull while gathering flowers and was enamored by his beauty. She began to rub his flanks and then climbed into his back.

Zeus as a bull carried Europa into the sea and swam with her to Crete, where she became a queen. He brought her many gifts. With Zeus, she had three sons, Minos, Rhadamanthus, and Sarpedon. Minos would become the step-father of the Minotaur, Asterius (named after Europa’s eventual husband).

Alcmene was the human granddaughter of Perseus and the wife of Amphitryon, prince of Tiryns. She was the tallest and most beautiful woman of her contemporaries and she adored and loved her husband beyond any other wife with their spouse.

Zeus wanted her, but he knew that she would not betray Amphitryon. He came to her in disguise as her husband, and he and Alcmene lay together. The deception was revealed later, but it was too late; she had already fallen pregnant. Months later, she gave birth to twins. One was Iphicles, son of Amphitryon, and the other was Heracles, son of Zeus and the greatest Greek hero.

Eurymedusa was a lovely woman who Zeus desired despite her already being married. He came to her in the form of an ant and she became pregnant. Their child was Myrmidon, a great Greek hero who became the ancestor of the Myrmidon people. His name came from μύρμηξ (ant).

Asopis was a daughter of a river god, Asopus, and his wife Metope. Zeus desired her and so abducted her in the form of a flame, taking her to the skies to copulate with her. According to Ovid, this was also how he abducted his sister, Aegina, although more usually this was in the form of an eagle (see below).

In Orphic mythology, the original human disguise he used to seduce Dionysus’s mother Semele is sometimes switched for a flame by which she became pregnant.

Zeus married six times before he fell in love with his sister, Hera, and declared that she should be his queen. Although she rejected him at first, Zeus was persistent. Zeus called a massive thunderstorm and then transformed himself into a tiny bird. He flew down to Hera’s window and started to make noise.

Finding the small creature in distress, Hera brought it inside and held it to her breast to warm it. Once there, Zeus transformed back and claimed Hera. Embarrassed by their sexual union, Hera agreed to marry her brother.

An alternate version of the birth of Helen of Troy involved Nemesis as her mother rather than Leda. Nemesis was the goddess of vengeance and the daughter of Erebus and Nyx, the personification of darkness and night respectively. However, in some mythology, she was instead Zeus’s daughter.

Zeus decided he would rape Nemesis, who had no interest in him and tried to escape him by turning herself into a goose. Zeus did the same and pursued her, eventually capturing her and taking her by force. In some versions, goose instead became a swan, just like with Leda.

Nemesis laid an egg in a marsh while still in the form of a bird. The egg was found by a shepherd and given to Leda, who hatched the egg and raised Helen as her daughter.

Antiope was a daughter of Nycteus, though some versions have her father as Asopus or Lycurgus. Zeus came to her in the form of a satyr, one of the horned, goat-legged companions of Dionysus. Antiope resisted, but Zeus took her by force.

While pregnant, fearing the wrath of her father, she fled and married a man named Epopeus. However, her uncle, Lycus, forced her to end her marriage and return home. Her father, Nycteus, killed himself from the shame of a defiled daughter. She birthed twins on the way home – Amphion, son of Zeus, and Zethus, son of Epopeus. Her uncle forced her to abandon them. When she returned home, her uncle’s wife treated her as a slave.

Later, she was reunited with her sons as adults. She fled to a farm where three men (her unknown sons and their elderly foster father) granted her shelter. Dionysus inflicted madness upon them and they were going to kill Antiope. Their foster father revealed the truth and, instead, the twins punished Antiope’s tormentor.

They were also planning on killing their uncle, but instead he stepped down and made them kings.

Like Alcmene, Cassiopeia was a married woman loyal to her husband, Phoenix. As he did with Amphitryon and with Artemis, Zeus took the form of Phoenix to seduce Cassiopeia. After he lay with her, she became pregnant. She gave birth to two sons, Anchinos and Atymnius. The former was definitely Zeus’s son, while the latter was either Zeus’s or Phoenix’s.

Atymnius later became the lover of Sarpedon, a great hero of Troy and Zeus’s son by Europa.

Zeus was a god, and experienced a kind of entitlement to sex which might seem jarring or even off-putting to us today.

Back then, his status and power made this a natural way to behave. His disguises weren’t trickery – they were just a way to get his due.