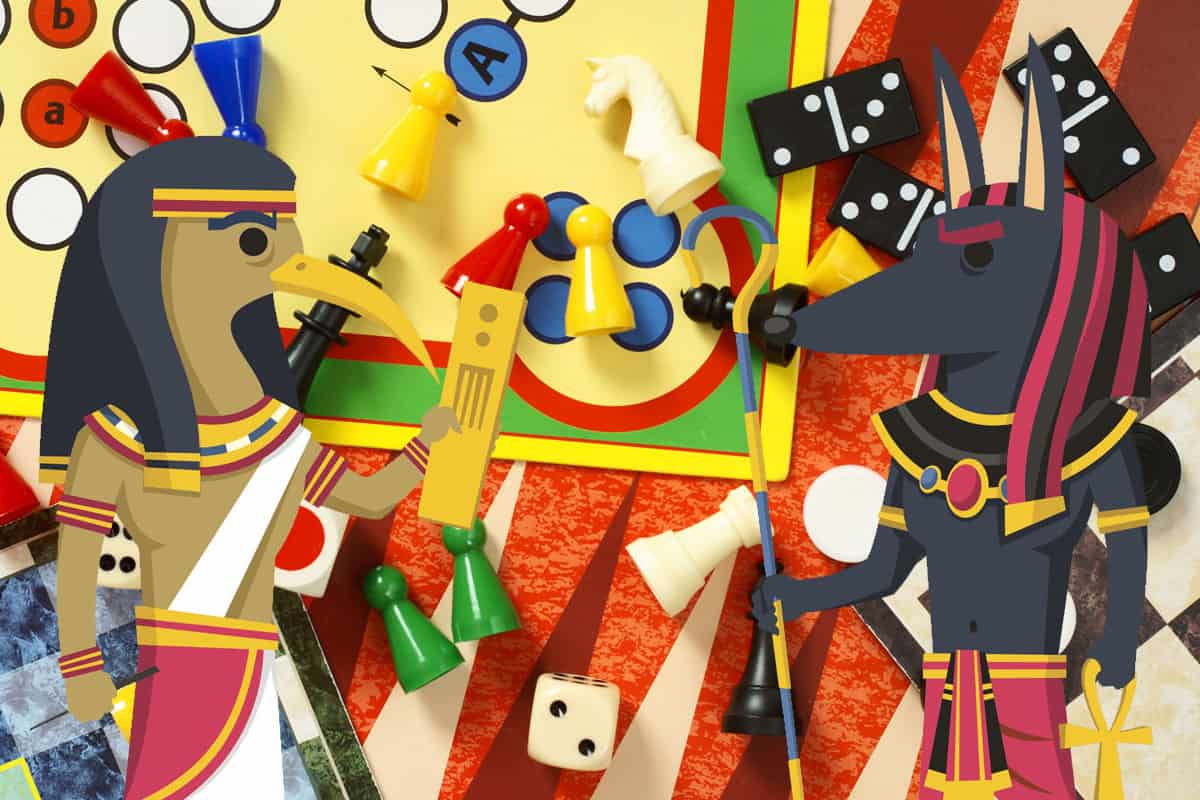 The best board game nights include a group of good people, some background music, and of course, the snacks. You cannot forget bowls of popcorn and chips and maybe some sweets to set off the salty. But the most important part of game night is always the game.

For those seeking to explore the world of Ancient Egypt and Egyptian mythology, there are board games perfect for small and mid-sized gatherings of friends and family.

Be careful though, the competition can be fierce as you compete against each other to build the palace of Cleopatra or ensure the survival of your followers. Whatever game you play, make sure you appease the gods with each turn.

So, What Are They Best Egyptian Mythology Board Games?

1. Cleopatra and the Society of Architects

Find yourself in the deserts of Egypt tasked with building Cleopatra’s palace. She will accept nothing but the best and when she leaves you to compete with other architects (players) to build the most important and valuable parts of her castle. Be wary though, temptation lurks behind every corner as you compete to become the wealthiest and the most favored of the queen.

Players will be given the choice to trade for materials but they may not come from the most reputable sources. Building faster may come to harm the player as at the end of the game the queen punishes the most corrupt architect and favors only the wealthiest who remains after her purge. Don’t fret, you can find redemption by making favors to the gods before the queen passes her judgment. But it’s all about finding a proper strategy and hoping you keep your head at the end.

Become a pharaoh of Ancient Egypt in this game and seek to gain dominion and influence over the neighboring kingdoms. Other pharaoh’s of the land along the Nile will be your competitors as you seek to build the most pyramids. Prepare for the long game in the beginning when you pick your province and begin building. You’ll need to acquire more land and building pieces as the game progresses but don’t forget to make your offerings to Amun-Re.

The game is played in two phases with four rounds in each phase. Play strategically because the winner is the one with the most points at the end.

Whether you want a fun game that is also travel-friendly or simply want a shorter game with all the strategies of the board game, the creators of Amun-Re also created a card version of their iconic board game. This takes a more bid and auction approach than the board game does but still manages to keep you on your toes. Otherwise, the premise is the same: acquire as many points as you can while still making your offerings to Amun-Re to win influence over the kingdoms and ultimately win the game!

Imhotep was a great architect of Ancient Egypt. It is believed he was the architect of Djoser’s step pyramid. In this game, your objective is to become an architect of the same calibre. You’ll have to buy stones, transport them across the Nile, and ultimately build. Each turn you’ll be able to complete one action. But nothing is ever as simple as it initially seems and this is still a competition. Other players will be trying to get in your way claim the title of Greatest Architect in place of you.

The people of Ancient Egypt are forgetting the old ways and in doing so, forgetting you and the other gods of Egypt. In this game, you and the other players are the gods. You’ll be Amun, Anubis, Isis, Osiris, or Ra and there is no honor amongst the gods here. No, you will be sworn enemies, competing against each other in an effort for you and your followers to be the last sect standing. Wit, strategy, and a cunning mind will be required unless you want to be forgotten into the abyss of history and time. The consequences are high so play well.

Senet is a truly unique game on this list as it is not a game based on the mythology of Ancient Egypt, reimagining the deities, monsters, and way of life. Instead, it is a game that was likely played by Ancient Egyptians themselves. The earliest evidence of Senet dates back to 2620 BCE.

This two-player game seems like a precursor to chess. It requires thinking ahead, strategy, and proper positioning of pieces. While the original rules have been lost to time, interpretations of play have been created based on the few remaining fragments of text uncovered by archaeologists.

Everything you do in this game is for the honor of the sun god Ra. Your primary interest is acquiring resources in this auction-based game. You’ll try to out-bid other players while always balancing the limitations of your current hand and the decisions you know you’ll need to make later.

Played in three rounds (called epochs), the game mirrors the four stages of Ancient Egyptian history. The winner is the one with the most resources at the end of the game, of course!

This game is perfect for that poker/Ancient Egypt niche! Does that even exist? Doesn’t matter because it’s still a fun game of gambling. Players will build a pyramid with wooden blocks with standard playing cards painted on one side. Each player will be able to see half of them and will attempt to build three poker hands with the tiles in the pyramid.

9. Honorable Mention: 7 Wonders of the World

While the game as a whole does not exclusively focus on anxiety Egypt or Egyptian mythology, the component that does is highly-detailed and immersive which is why it is getting an honorable mention on this list. In 7 Wonders of the World, players each take charge of one of the seven wonders. They compete to develop the most victory points by developing their regions and settling military conflicts.

One of the seven wonders in this game is the Great Pyramid of Giza in Egypt. This means one player is set upon developing this region. 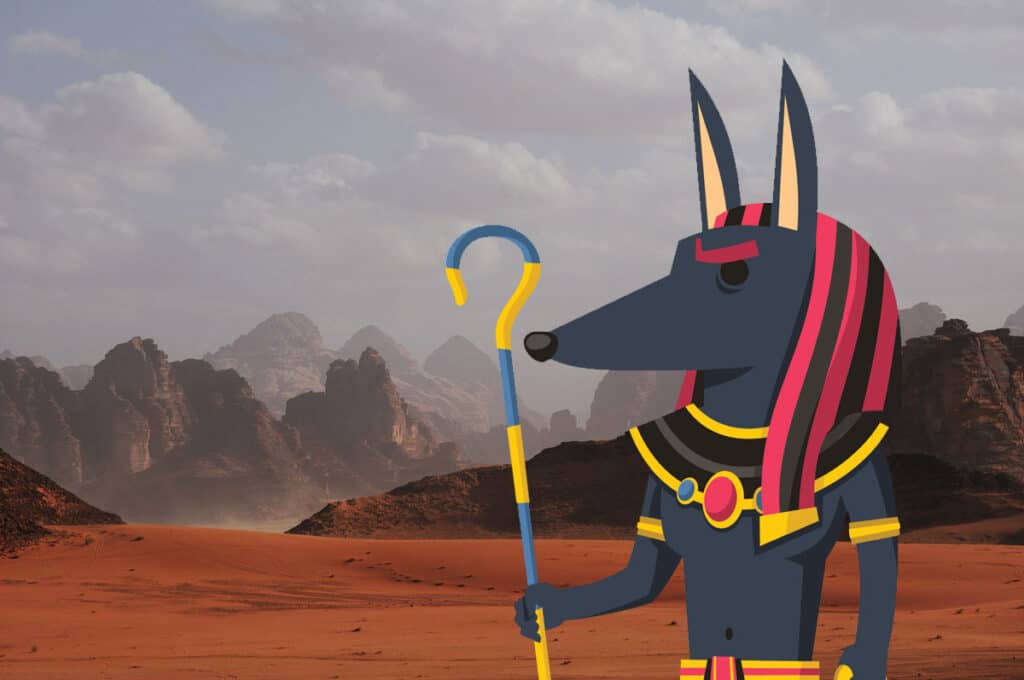 Anubis, the Ancient Egyptian go of death, mummification, and many other things is very well … 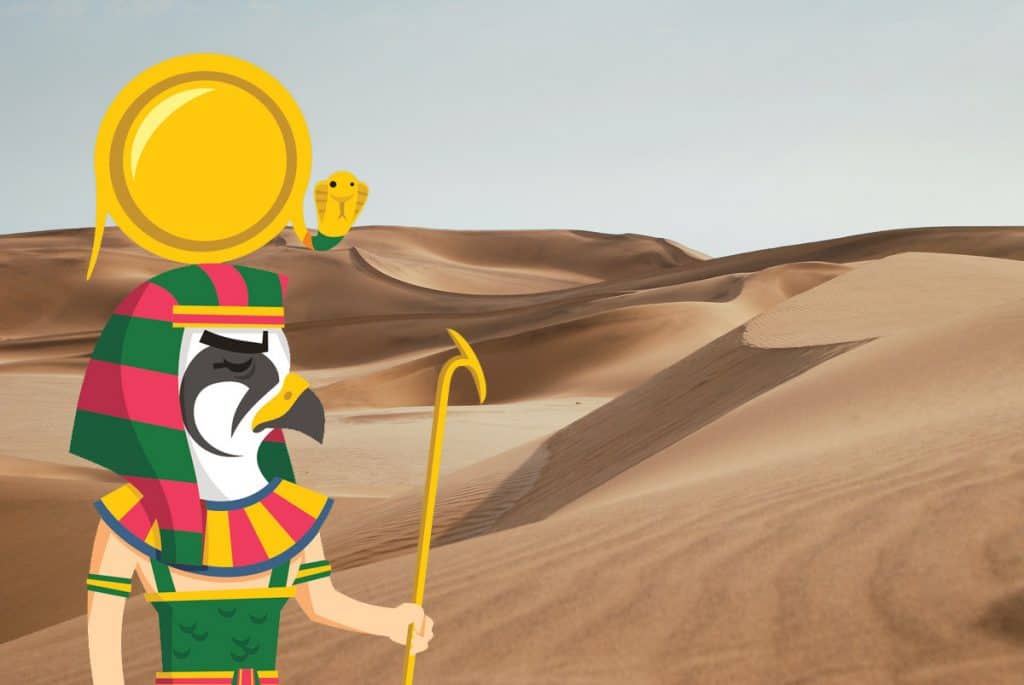 25 Facts about Ra: A Heron, Daughters and Rebellion

Perhaps the most famous of the Ancient Egyptian gods, Ra (or Re) was a later …