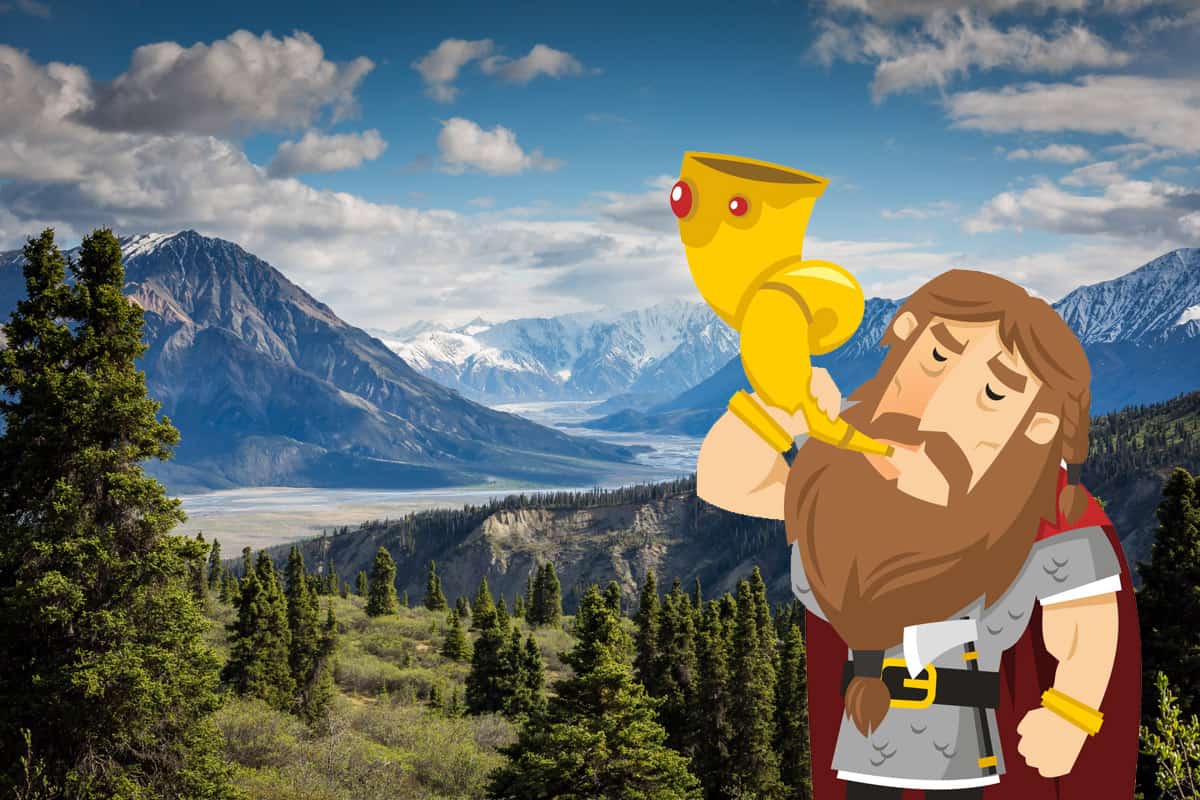 Heimdall is the the watchman of Asgard, one of the nine worlds of Norse mythology. He lives next to the Bifrost bridge in his house called Himinbjorg. He guards the bridge and protects Asgard from the any approaching enemies.

He is one of the more interesting Aesir gods and is important in some of the Norse myths. So, lets dive in to discover a little more about Heimdall.

Heimdall was the son of Odin, the king of all the Aesir gods, and he had 9 mothers. These 9 mothers were daughters of the Ocean god Aegir. In some of the myths Heimdall is said to be the father of mankind.

The two major strengths of Heimdall are said to be his eyesight, which can see into all the 9 worlds of Norse mythology, and his hearing with which he can detect many approaching enemies.

The Myths of Heimdall

Heimdall isn’t one of the main gods of Norse mythology and as such you won’t find him in a great number of the Norse myths. That being said, he does have an important role with Asgard and as such there are some interesting myths involving him that are certainly worth telling. What follows are 3 of the most important.

After the Aesir and Vanir war had taken place, the walls around Asgard lay in ruins. The gods wanted to rebuild the wall, but it wasn’t a task they wanted to take on themselves. One day, a rider crossed the Rainbow Bridge and met with Heimdall.

He told Heimdall he had a plan he wanted to discuss with the gods. Heimdall told the man he could tell the plan to him, but the man refused to tell only one god. He wanted all of them to hear it from him. Heimdall allowed the man to cross, but he wasn’t happy with it. The gods and goddesses all gathered to hear this plan.

With all the gods in one place, the man spoke of rebuilding the god’s wall. He told them all that it would be stronger and higher than it was before. No one would be able to get through into Asgard. Odin knew there was more to this offer, so he asked the man what the conditions were. The man told him he would need eighteen months to finish the wall and he would like the goddess Freya to be his wife. The gods were furious about this request and in no way wished to agree.

But, the man continued with his list of requests. He also said he would need the Sun and the Moon. While the gods told him that all was not possible, Loki spoke up in disagreement and told the gods they should consider the plan.

They sent the man away and began to discuss it together. Loki told them they could turn the plan into one that would benefit them. They would counter the man’s terms with terms of their own. Loki suggested they give the man 6 months to complete the wall. The gods and goddesses agreed to this plan. The man agreed to the new time frame, but only if he was allowed the help of his horse, Svadilfari. They granted him his new terms.

As the months passed, the man was building the wall way quicker than everyone had expected that he would. Odin called a meeting and the gods and goddesses determined they needed to find a way out of honoring their end of the contract because they couldnt possibly give away the sun and the moon.

Loki was tasked with getting them out of the contract. Using his shape-changing abilities, he changed into a beautiful mare. The mare caught the attention of Svadilfari who had been helping the man build the wall. This led to no work being done on the wall. The man was unable to complete his task in the six-month time limit.

The man became highly enraged suspecting he had been cheated. The disguise of a man fell away to reveal he was actually a giant. With this realisation, Thor took his hammer and smashed the giant’s head in and killed him.

Months passed and Loki returned from his jaunt with Svadilfari. He and the horse had produced a horse known as Sleipnir. Odin took a great liking to the horse and Loki gifted his horse son to Odin.

The importance of this myth shows one of the better sides of Loki. It is also important to note that Heimdall, the god who apparently saw everything that went on at the Rainbow Bridge, was able to be fooled by the giant’s disguise. Had it not been for Heimdall letting the man cross the bridge, the gods would not have been put in that predicament. In other words, Heimdall was fallible.

It also introduces the giants as enemies of the gods. They were often attempting to trick the gods in one way or another. The stakes were often very high and could lead to the destruction of the world.

Heimdall During the Battle of Ragnarök

Heimdall played a significant role during in the final battle of Ragnarok. With his gift of far farsightedness, he saw what was coming before it began.

It was with this realisation that he blew into the Gjallarhorn, his horn, and alerted the gods to the events that were to unfold. The gods and goddesses gathered together and got ready for the battle ahead.

The king of the gods, Odin, rode off on his horse Sleipnir to Mimir’s Well, a location of insight, to find out what he could do about Ragnarok. When he returned, his face was very sad.

He led everyone to battle with his magical spear, Gungnir. The sea turned hot and began to boil. Its waves crashed against the shore and sent the giant Midgard serpent, Jormungand, onto the land.

Naglear, the awful ship filled with giants headed straight for the battlefield. It was led by Loki who brought with him all the dead from the underworld.

Loki’s daughter Hel joined the battle as well. When Loki crossed the Rainbow Bridge that Heimdall had guarded so well, it began to fall to pieces.

Odin was swallowed by Fenrir, Thor died to Jormungand, and Loki and Heimdall both fell to one another. Ragnarok was the end of the world as the gods and goddesses knew it. It is also said some of the gods survived the destruction as well, which created a new era.

The significance of this myth lays in the fact that even with Heimdall being able to see into the future, he couldn’t stop what was coming. The events of Ragnarok unfolded with both Heimdall and Odin being able to see the end. The gods still fought with everything they had, even though it was clear their fate was sealed.

So there you have it, Heimdall in all his glory. He was quite the character in Norse mythology. As with many of the Norse gods, there is limited information on all the goings on in the life of Heimdall.

That being said, there is enough to understand the basics of his role in the Norse universe. He played many major roles, not least in his final stand off with Loki.

Thanks for taking the time to read this summary of Heimdall. Please feel free to comment below!