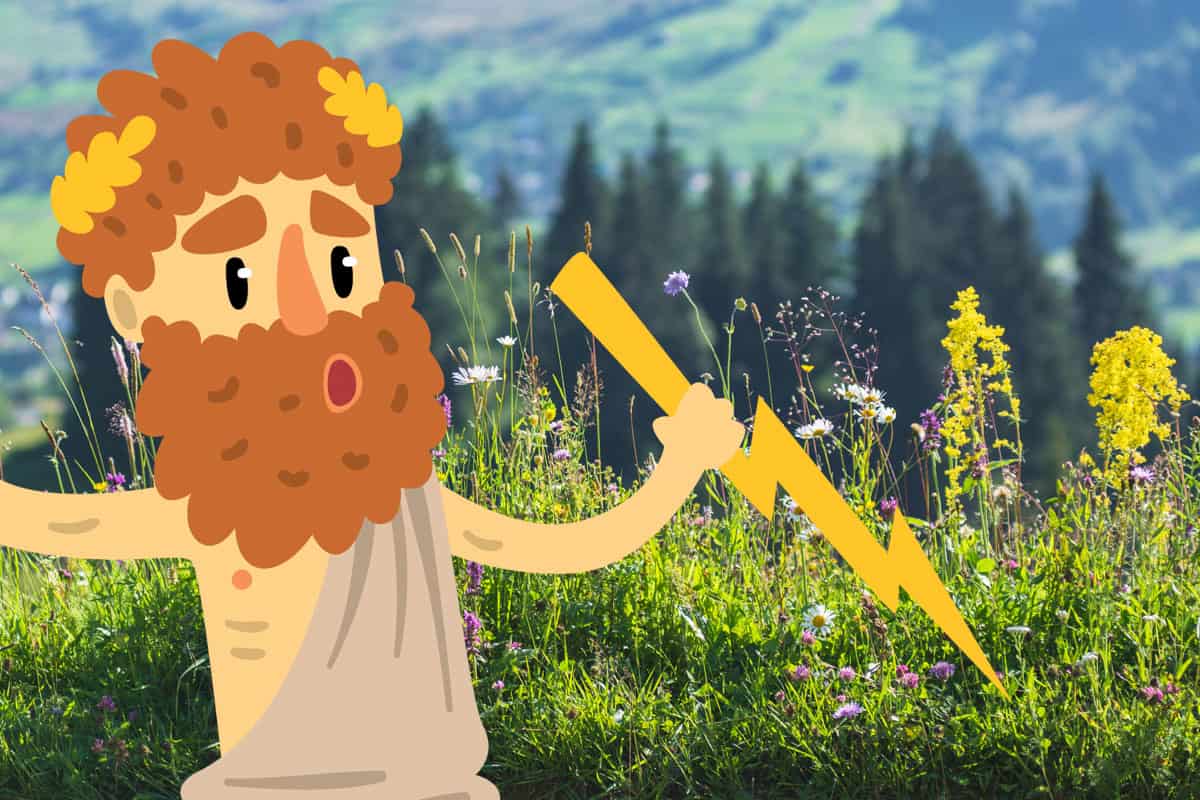 The bow and arrow incites an image of fierce warriors, ready for battle. The Ancient Greeks were masters of the bow and arrow, swords and spears, and many of their finest warriors took these up as their weapons. Crafted by the gods and held by the gods, no one wanted to find themselves on the other side of one of these weapons. As if a pointed, metal arrowhead piercing the body wasn’t enough, some of the weapons held by the  gods and demi-gods alike possessed magical properties.

Take the bow of Apollo, for example. His golden bow and silver arrows were the weapon of choice when it came to killing the beast Python. The Bow of Hercules won many battles and was instrumental to winning the Trojan War. There is also the Bow of Eros. While not considered a traditional weapon, it could easily be used as such. As the myth goes, anyone touched by the bow of Eros would fall madly in love and in lust with the first person they see. In line with the bow of Eros, many weapons took on more creative appearances such as the Necklace of Harmonia and the Girdle of Aphrodite.

These weapons have played such a role in Greek myths that their heroes, gods, or enemies are rarely seen or spoken of without them.

A Few of the Most Important Weapons Used in Greek Mythology

Of all the weapons possessed by the Greek gods, Zeus and his lightning bolt may be the most iconic.. A fearsome man with a long flowing beard, half hidden by the clouds and a bolt of lightning in his hand is sure to leave an impression. This weapon acted as much as a tool for brutal punishment as it symbolized Zeus’s power and strength as the king of the gods.

Zeus received his iconic weapon as a gift from the Cyclopes. After being born in secrecy and living a hidden childhood, Zeus went to seek revenge on his father Cronus for his violent crimes against his mother, Rhea, and his siblings. After rescuing his siblings, he also freed Brontes, Steropes and Arges – the Cyclopes from Tatarus. As a reward for his help, they gifted him the lightning bolt which would become instrumental to winning the war against Cronus and the titans.

It’s believed that just as Brontes, Steropes and Arges had forged Zeus’s lightning bolt, they also forged Poseidon’s trident. Simply by striking it against the earth, he could cause water to flow as a life-affirming gift or create devastating storms and earthquakes.

Like the lightning bolt, it proved to be a valuable tool for the gods to win the war. Also like his brother, Poseiden would go on to use his trident for both kind and nefarious means. In one instance, after losing a contest with Athena regarding who owned the Atticus Peninsula, he used the trident to dry up the land and render it inhospitable to its inhabitants.

3. The Scythe of Cronus

Before Zeus overthrew his father Cronus, Cronus overthrew his own father Uranus. His rule would be called the Golden Age and was a high moment in Greek lore. Cronus is often depicted with his scythe in hand. With Gaia’s aid, Cronus had used this scythe to castrate his own father. From the blood spilled in this act, came three monsters including the Gigantes.

Having castrated his father, Cronus took over as ruler alongside his sister and future wife, Rhea. From them came Zeus, Poseidon, Hades, and several of the other deities that would go on to dominate Greek myth and legend.

Apparently, Zeus did not learn from his father’s mistakes. When one of his many lovers, Metis, became pregnant, he heard a prophecy that her son would overthrow him. He tricked Metis into turning to a fly and swallowed her whole. Eventually this led to a terrible headache and he ordered Hephaestus to cut open his head or find some other way of relieving the pain.

Hephaestus used a labrys, a dual-edged ax, to cut open Zeus’s head and from his head emerged Athena, fully formed.

Depending on which account one accepts, the Aegis was either a shield or a specially made garment that gave the wearer extra protection. In any regard, it was owned by Zeus who frequently shared it with Athena. It was often said to bear the head of a gorgon.

That gorgon is believed to be Medusa herself. After Perseus slayed Medusa, he offered her head as a gift to Athena who fixed it on the Aegis. Even in death, Medusa’s eyes could still turn anyone who sees them into stone. This turned an already powerful shield into a deadly weapon.

6. The Sword of Justice

Themis is the goddess of justice and she is often depicted with scales in one hand and a sword, pointed downward with the other. Little is known of her and the accounts are conflicting. According to one story, she was one of Zeus’s many wives. According to another, she was one of the nurses who helped raise him in secrecy. Regardless, she was believed to be orcular and the very embodiment of fairness, order, and divine justice.

The sword of justice in her hand represents punishment for any wrongdoing.

While not a weapon in the traditional sense, Aphrodite’s Girdle had the power to make her irresistible to any man. In theory, this could be a powerful tool in any battle. It may have even played a role in the Trojan War.

In the events leading up to the war, Paris, the prince of Troy, was given the impossible task of declaring who was the most beautiful and fair goddess. His choices were Athena, Hera, and Aphrodite. Seeing that he was unable to decide, the goddesses resorted to bribery and trickery. Some accounts suggest he accepted Aphrodite’s bribe but it’s not without reason to assume she used her girdle. Either way, Paris declared Aphrodite the fairest. As a result, both Athena and Hera sided with the Greeks against Troy in the war and helped lead to their victory.

8. The Necklace of Harmonia

As Greek mythology loves to teach, jealousy is a dangerous, fickle thing. The Necklace of Harmonia is yet another reminder of this lesson. It may also teach the lesson that some things are pretty on the surface but dangerous beneath – not unlike certain amphibious species. In this case, the necklace was crafted by Hephaestus in his rage over Aphrodite’s ongoing affair with Ares. This came about after their union produced the child Harmonia.

Hephaestus gave Harmonia the necklace. It had the power to keep the wearer young and beautiful forever. On the flip side, it cursed the wearer with incredible misfortune as well.

His victory over Python gave him a reputation for victory in battle. Later, Apollo sided with Troy in the Trojan war. As his primary weapon, he shot bows full of the plague into Greek encampments. This act shows one of the earliest examples of biological warfare as a tool used in battle.

As lore would have it, Apollo’s arrows were crafted from sunlight and could cause both health and famine at his will.

Apollo’s twin sister was Artemis. Where he was god of the sun, she was the goddess of the moon, the hunt, and the wilderness. She was also known to be the benevolent protector of women and children. Her weapon was the bow and arrow.

While they were similar in some respects, Artemis and Apollo were also polar opposites in others. Her arrows were made from moonlight instead of sunlight. Just as she could protect women and children with these arrows, she could also bring about death and disease.

In one myth, the twins worked together to kill the children of Niobe, Queen of Thebes. They opted to kill her children after hearing that she had boasted that she was better than Leto, the mother of Apollo and Artemis. Apollo killed her seven sons while Artemis killed her seven daughters. Other accounts suggest they allowed one boy and one girl to live.

Hercules may not be a full god but even as a demi-god his story continues to be told and influence contemporary popular culture. Taking a page from Apollo’s book, Hercules dipped his arrow heads in Hydra blood. This made the arrow so poisonous that even if the wound would not have killed the maimed party, the poison would.

After his death, his bow went to Philoctetes because he was the only one who would light the funeral pyre. His bow became instrumental in the Trojan war and helped weaken Troy. Helena, the prophet, said that the Greeks required the Bow of Hercules if they were to win the war.

While not necessarily a weapon taken into battle, few bows are so famous as the bow of Eros. It is believed that anyone struck by one of his arrows would fall madly in love with anyone and in some cases, anything. As a lesson in being careful with your own weapon, Eros once scratched himself with his arrow. This caused him to fall in love with the mortal, Psyche. While he did marry her, it was forbidden for her to actually see him. This had something to do with a general rule that mortals were not supposed to look upon Eros. As a result, he would only visit her in the dark.

As far as using his arrows as a weapon, Apollo would know the pain they cause well. After doubting Eros’s abilities as an archer, Eros shot Apollo and caused him to fall in love with a nymph, Daphne, in retaliation. But he didn’t stop there. Eros also shot an arrow at Daphne that ensured she remained indifferent to Apollo. Daphne pleaded with her father for help and so he turned her into a tree. This infuriated Apollo but seeing nothing he could do about it, he spent the rest of his life worshiping her as a tree.

18 Evil Greek Gods and Goddesses: Who Are They?

In Greek mythology, many of the Gods have both positive and negative traits. This was … 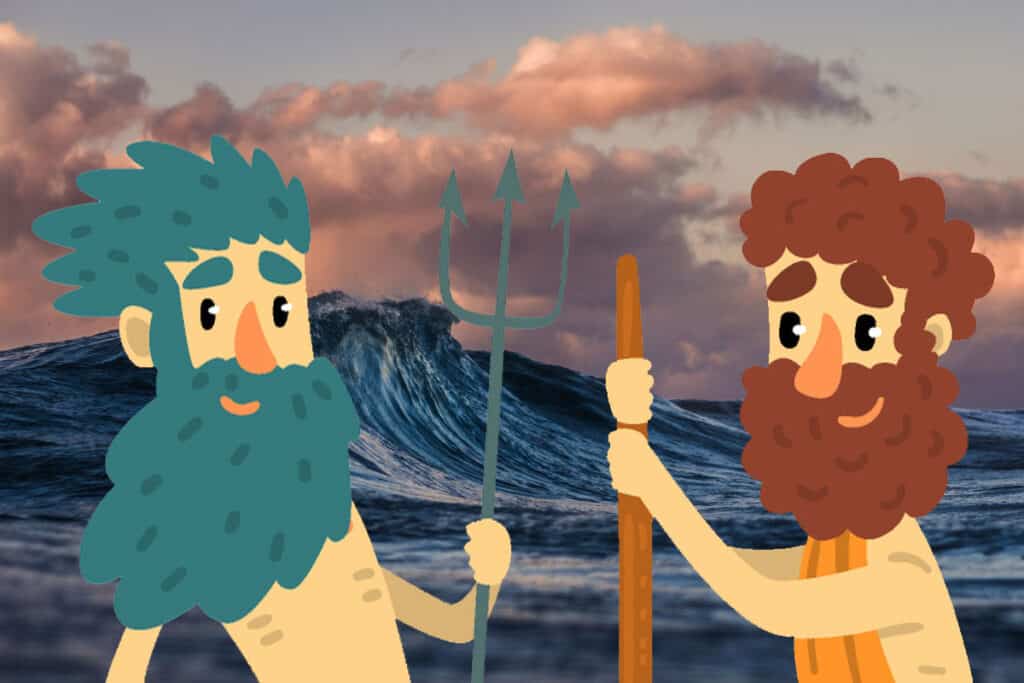 Poseidon and Pontus: What is the Difference?

Both Poseidon and Pontus were Greek gods of the sea. While Poseidon is considerably more …