Skip to content
Home » Vishnu vs Zeus: What is the Difference? 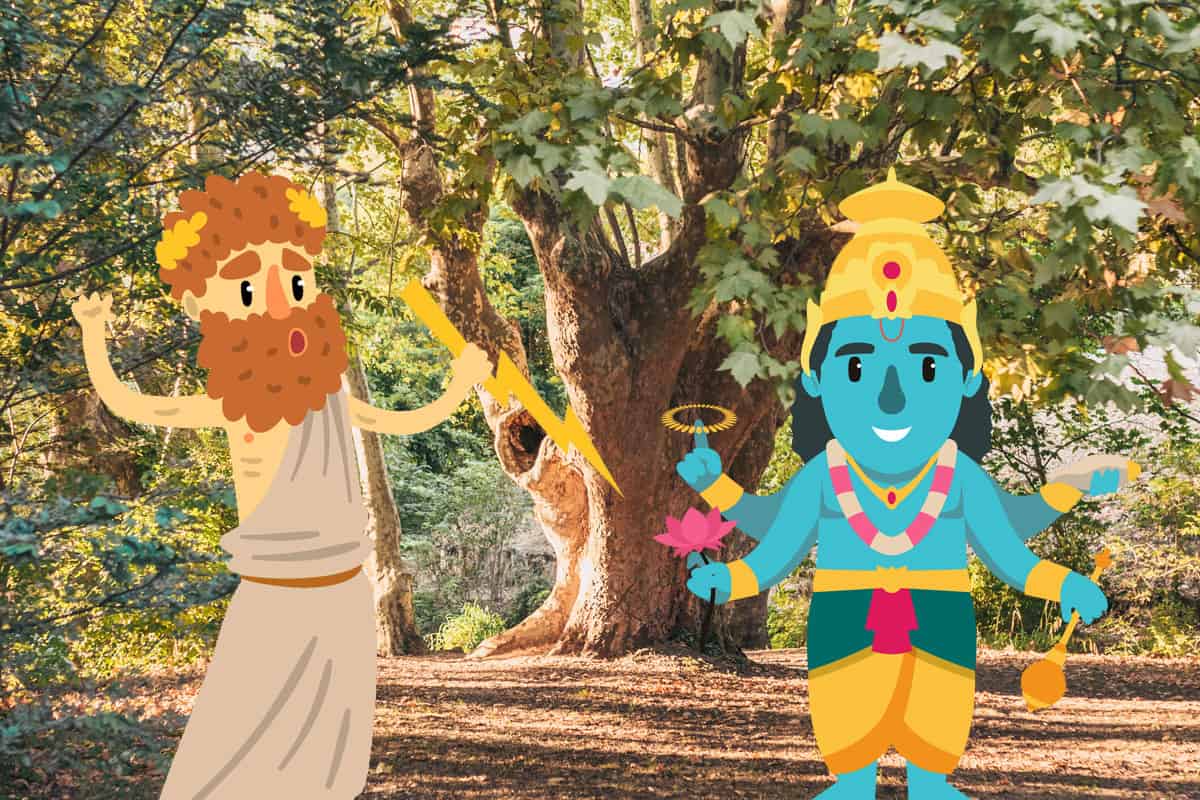 Leaders of their respective pantheons, associated with eagles, known for their voracious abilities in battle, it must be Vishnu or Zeus. One Hindu, one Greek, both are pivotal figures in their respective traditions.

Zeus is a clear leader of the Greek pantheon with a single, objective origin story and rise to leadership. Vishnu’s status is less clear on the other hand. His stories vary depending on the specific sect the stories come from. While Zeus is often portrayed as either a great protector or harsh deliverer of justice, Vishnu is consistently seen as a great protector of his devotees and earthly creations. In fact, one of his hundred and eight names is bhakta-vatasala which means the ‘protector of the devotees.’ These names are chanted as part of ritualistic prayers to the deity.

In any case, both deities provide lessons on not crossing the gods and the power required to sustain the universe.

So, What is the Difference Between Zeus and Vishnu?

Like with most Hindu myths and folklore, there are varying accounts of any given origin story. In the case of Vishnu, some say he always existed. In fact, according to the Vishnu Puran, Vishnu was the only one who survived pralaya, the complete destruction of the universe. After pralaya, he was the cause of the new world creation. This story is commonly accepted by the Vaishnava sect while Shaivites tend to believe that Vishnu was born from Shiva. Either way, both come along, in addition to Brahma, to ensure the cycle of creation, preservation, and destruction continue.

Zeus was born of Cronos and Rhea – two of the titans who ruled before the Greek gods. Cronos had heard a prophesy that his son would be the one to overthrow him and so each time one of his wives gave birth, he would promptly swallow the child. Rhea plotted against him with Mother Gaia and instead of giving him the newborn Zeus, she gave him a rock swaddled in a blanket that Cronos swallowed immediately. Once he reached adulthood, Zeus challenged Cronos and forced him to regurgitate his siblings. Together, they fought Cronos and the Titans and won. Zeus became the lead deity and shared the world with his siblings. While Zeus ruled the skies, his brother Poseidon went on to rule the sea and Hades began to rule the underworld, while the earth remained with Mother Gaia.

Vishnu has blue skin and is often seen with four arms and wearing a yellow dhoti or lower body garment. In this form, he is called Chaturbhuja Vishnu. In his hands, he holds a lotus, the Sudarshana Chakra (a war discus), a mace, and a conch. While this is the most common form, some scriptures and artwork show Vishnu with two hands and others still show his thousand-armed form. He is usually found standing upright or reclining on the celestial snake Adishesha where he maintains all of existence. Other images of Vishnu include him riding on Garuda, a giant eagle.

Zeus is often depicted as an older gentleman, well-built, with a long white beard and stern face and wearing a traditional white tunic. He is often shown carrying a thunderbolt and with an eagle by his side. One myth says that the thunderbolt was a gift of gratitude from the Cyclops after Zeus released him from captivity. While this was his common appearance, Zeus had the ability to shapeshift and change forms, a gift he used frequently to help him procreate with many mortals and immortals alike.

While there are countless stories of Vishnu and his many forms or incarnations, one of the most famous ones is the story of Gajendra’s release found in the Srimad Bhagavatam. Gajendra was the king of the elephants and one day while swimming in the river a crocodile bit down on his leg and refused to realise him. He fought the crocodile valiantly but to no avail. Some versions of this story say they fought for a thousand years. Eventually, Gajendra realised he could not win and reached out to shore for a lotus flower. He focused his mind on Vishnu and offered the flower up to him. Vishnu appeared in the sky, riding Garuda, and threw his Sudarshana Chakra and cut off the head of the Crocodile, thus freeing Gajendra. The story represents the relationship between the worshipper and the one who is worshipped, that when one calls out with sincerity, Vishnu will come and help. The crocodile symbolises the attachment to the material world and Vishnu killing the crocodile symbolises him freeing Gajendra and giving him moksha or liberation.

The story of the flood that came to wipe out humanity in order for a divine power to start again crosses traditions. In the Judeo-Christian context, there is the story of Noah’s Ark. In Hinduism, there is the story of King Satyavrata and Matsya Avatar. The same is true for Greek mythology. The story goes that Zeus became progressively frustrated with the decadence and vulgarity of humans. He plotted with Poseidon to wipe out the human race with a massive flood. This deluge left only two survivors to re-populate the earth and try again.

Alongside Brahma and Shiva, Vishnu is part of the trimurti. While Brahma represents creation and Shiva represents destruction, Vishnu sustains creation. He is commonly worshipped by Vaishnava sects of Hinduism as the highest deity who exists within all things, from whom all things are made, and who sustains all of creation. According to chapter seven, verse seven of the Bhagavad Gita, a pivotal Vaishnava text, ‘There is nothing higher than myself, O Arjun. Everything rests in me, as beads strung on a thread.’ This verse is said by Krishna who is believed to be an avatar or incarnated form of Vishnu.

As the leader of the Greek pantheon, Zeus is often associated with leadership and wisdom. He was also revered as either a great protector or feared as a great punisher. Those who crossed Zeus often received severe punishments that would last for the end of time. One such punishment is the one Zeus gave to Atlas after he overthrew the Titans. Atlas’s punishment was to carry the heavens on his shoulders for all of eternity.

Vishnu remains one of the most popular and highly worshipped deities in the Hindu pantheon. Music and movies continue to be made about him and his various incarnations. The Little Krishna series is an animated children’s series detailing the life of Krishna, one of the Vishnu incarnations. Most contemporary depictions still come out of India as Vishnu hasn’t seen the same popularity or notoriety in the West as deities within the Greek and Roman pantheons. The most notable exception to this might be a single reference found in the Marvel Cinematic Universe (MCU) where a character suggests that the Hindu deities could be understood in the same way the MCU set up the Norse gods – as aliens from another dimension.
Myths associated with Zeus have inspired many re-tellings on screen and in books. Some of the most notable include the movie The Clash of the Titans and its sequel Wrath of the Titans which re-tells the Perseus myth. Additionally, Rick Riordan’s Percy Jackson & the Olympians series and Disney’s animated Hercules may take liberties in retelling the myths but present a true to myth Zeus character.