Skip to content
Home » 9 Important Greek Mythology Couples: Who Are They? 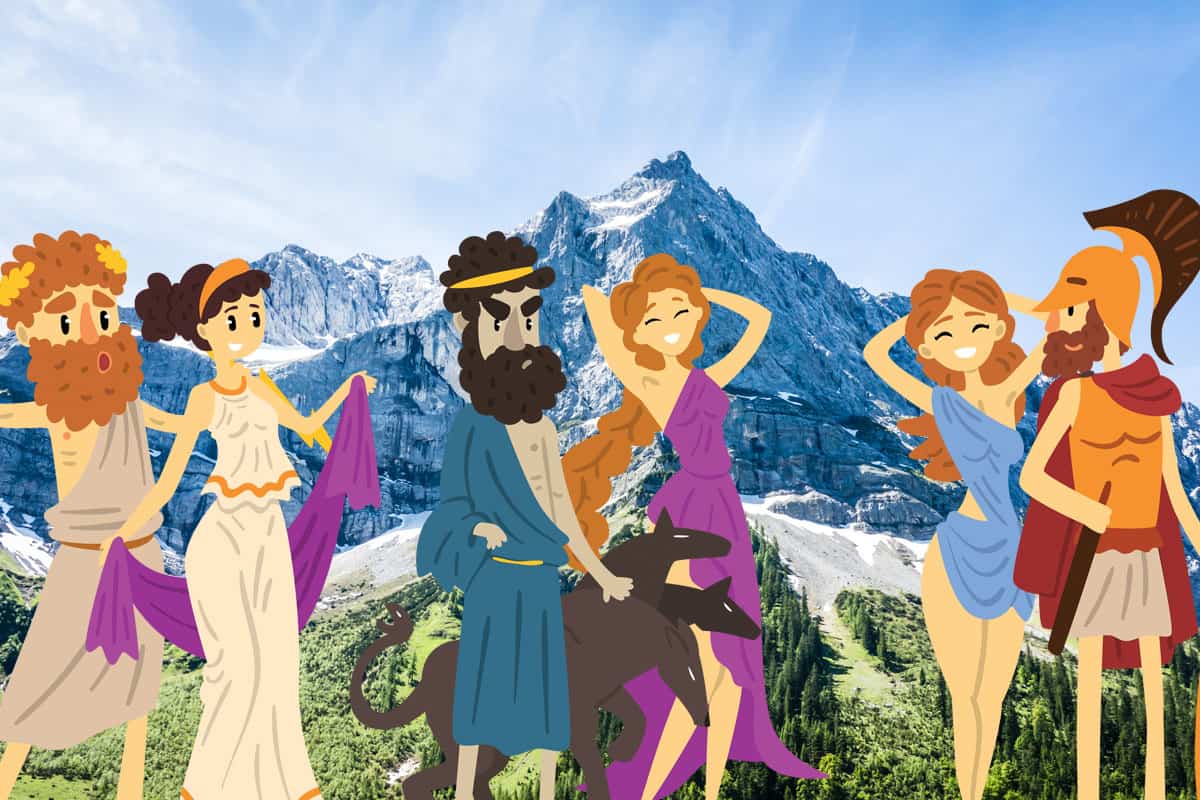 A vast number of Greek myths come down to the deities’ propensity for extramarital affairs. This has affected the relationships of established and married couples in various ways. Maybe most famous is Zeus and Hera, whose relationship is heavily documented by Zeus’s affairs with gods and humans alike and Hera’s resentment towards Zeus. But the gods weren’t the only ones with a flair for the dramatics. Mortal couples like Orpheus and Eurydice are equal stars in that respect. What would Greek mythology be without sex, drama, and revenge? Not much.

When it comes to drama, tragedy, passion-fueled rage, look no further than the Greek couples. Amongst the gods are Zeus and Hera whose abusive relationship exists as a primary reason for many of the Greek tales. There is also Ares and Aphrodite who may have been inspired by Zeus and Hera. Amongst the healthier couples is Hades and Persephone but even that is a stretch. When it comes to mortals, Orpheus and Eurydice take the cake for professions of undying love while Pyramus and Thisbe can be considered the precursor to Romeo and Juliette. These are the couples whose flair for drama brought the world much of the lore and legends told today.

A Few of the Most Important Couples in Greek Mythology

Few relationships were as dramatic and frankly abusive as the one between Zeus and Hera who was not only his wife but also his sister. Hera being the goddess or marriage never strayed from the marriage but absolutely sought her revenge for his numerous affairs. Except instead of seeking revenge on Zeus, she chose to attack the women (and men) he stayed with and his illegitimate offspring. . A force to be reckoned with, no one wished to be subject to this.

Hercules is a great example of this. For no other reason than her rage over the fact that he was Zeus’s son, she forced him to kill his own wife and children.

Contemporary classists and feminist scholars look at this relationship as an example of rape culture within Greek mythology and a demonstration of toxic masculinity.

In a pale attempt at coming to Zeus’s defense, Cronus and Rhea seem like a good place to start. This couple were the parents of Zeus and his many siblings. They also happened to be siblings. As the leaders of Olympus, they brought about a golden age in which immortality did not exist. Or so the story goes.

When Cronus learned that he was destined to be overthrown by his own children, he started swallowing them whole as soon as they were born. Naturally, Rhea was not too pleased with this outcome so she turned to Gaia for help when she became pregnant with Zeus. Gaia helped her hide Zeus and as a result, helped the prophecy to become fulfilled and for Rhea, Zeus, and her other children to get retribution.

Hades and Persephone are probably the healthiest couple as far relationships between Greek gods go. Their beginning wasn’t so romantic as Hades kidnapped Persephone (with Zeus’s permission) and took her to the underworld to be his wife. Demeter, Persephone’s mother and the goddess of the harvest, searched the world for her daughter. Distraught, she began to starve the earth as her focus was solely on finding Persephone.

Eventually, it is revealed where her location is and a deal is made between the gods. Persephone would spend half the year in Hades with her new husband and half the year with her mother. This is said to be the reason for the seasons. The end of autumn and the winter months are the months in which Persephone is in the underworld with Hades.

Overtime, the two became committed to each other. Neither of them ever strayed from the marriage and some stories show Persephone as being the one who can calm the rage of Hades and convince him to be more merciful.

It’s still not healthy by twenty-first century standards but it is a marked improvement from Zeus and Hera.

Aphrodite was married to Hephaestus. It’s said that the marriage was arranged and her true love was Ares, god of war. Aphrodite and Ares pursued a rather passionate and promiscuous affair. Even after being caught by Hephaetus, they continued onwards.

What started as a rather undramatic affair (according to Greek standards at least) quickly spiraled into chaos. A fiery couple – the two regularly cheated on each other and then exacted revenge. In some cases, they took a page from Hera’s book and attacked their partner’s lover. In other cases, they attacked each other. It became a vicious cycle that resulted in many of the curses Aphrodite is known for.

One famous example is the curse she placed on Eos. As punishment for sleeping with Ares, Aphrodite cursed her to always fall in love with mortals. For an immortal being, this must lead to an eternity of pain and heartbreak.

The gods were not particular when it came to whether their lovers were mortal or immortal. They also seemed to be rather fluid in regards to their sexuality. Apollo’s relationship with Hyacinth is one such example. Hyacinth was a spartan prince and renowned for his beauty which had pulled the desire not only of Apollo but of two of the wind gods and another mortal.

Ultimately, Hyacinth chose Apollo but as with most Greek myths, their love ended in tragedy. He died after being hit in the head with a flying discus while playing with Apollo. Some accounts suggest that Apollo threw it too hard and as he went to chase and catch it, he received the fatal blow. Other accounts hold Zephyrus as the guilty part. Zephyrus, one of the wind gods who loved Hyacinth, changed the course of the wind and therefore the discus in a fit of rage and jealousy.

While Hyacinth did ultimately choose Apollo over the others who sought his affection, it is worth noting his relationship with Thamyris. According to some tellings, Thamyris had been Hyacinth’s lover first. The Greek paradigm holds him to be the first gay man.

Thamyris was a talented musician who had tried to woo Hyacinth with his songs. This did not work and in his rage, he challenged the Muses to a competition which he ultimately lost.

Here we get to the mortal couples in Greek mythology. Orpheus was a famous lute player and considered the best musician in existence. It was believed his music brought the harvest and the rain. One day he met Eurydice and she became his muse. The two fell in love and quickly married.

During the wedding celebrations, Eurydice wandered away and was bitten by a snake. Orpheus found her dead body and became overwhelmed with grief. Committed to bring her back, Orpheus traveled to the underworld to convince Hades and Persephone to let him bring his true love back. Initially, Hades said no but was eventually moved to agree. In some accounts, Persephone encouraged her husband to have mercy and in others, it was Orpheus’s song that did it.

Either way, the conditions were the same. Orpheus could take Eurydice back but he had to walk in front of her and could not look back until they were both on Earth again. But the footsteps of the dead have no sound and try as he might, Orpheus could not help himself. Just before he reached the surface of Earth, he looked back and Eurydice’s soul was dragged back into the underworld forever.

Pyramus and Thisbe were the original Romeo and Juliette story. Born to warring families, these lovers understood the assignment when it came to being tragic lovers. Their story goes that they’d never met in person. Instead they exchanged romantic whispers with each other through a crack in a wall that connected their homes.

Eventually they decided to meet in person. Thisbe arrived at the mulberry tree that was their designated meeting site first. Instead of finding her secret lover, she was confronted with a lion and her recent prey. She ran away in fear but left behind her veil so that when Pyramus finally arrived he only found her veil and the blood that remained from the lion and her kill.

Instead of attempting to figure out what had happened, Pyramus assumed she was dead and took his own life. When Thisbe returned, she found her dead lover and committed suicide herself.

Many people know the classic story of how Narcissus discovered his own reflection and wasted away while wondering at his own beauty. In fact, upon his birth his mother had visited a seer who warned her that he could live a long life as long as he never discovered his own image. But as fate would have it, he did.

Echo was a forest nymph who had fallen in love with Narcissus after seeing him in the woods one day. She followed him and Narcissus, who felt someone following him, shouted out for whomever it was. Echo did as she does best and simply repeated his question, ‘Who is there?’ After some back and forth, she revealed herself but found rejection in the eyes of the one she admired. She ran away and spent the rest of her life in solitude, withering away until all she was only just an echo.

When Aphrodite heard of this, she decided she needed to teach Narcissus a lesson. She led him to a clear water pond where he saw his reflection for the first time. He came to fall in love with his own face and remained there until he died and became the orange and white flower called Narcissus.