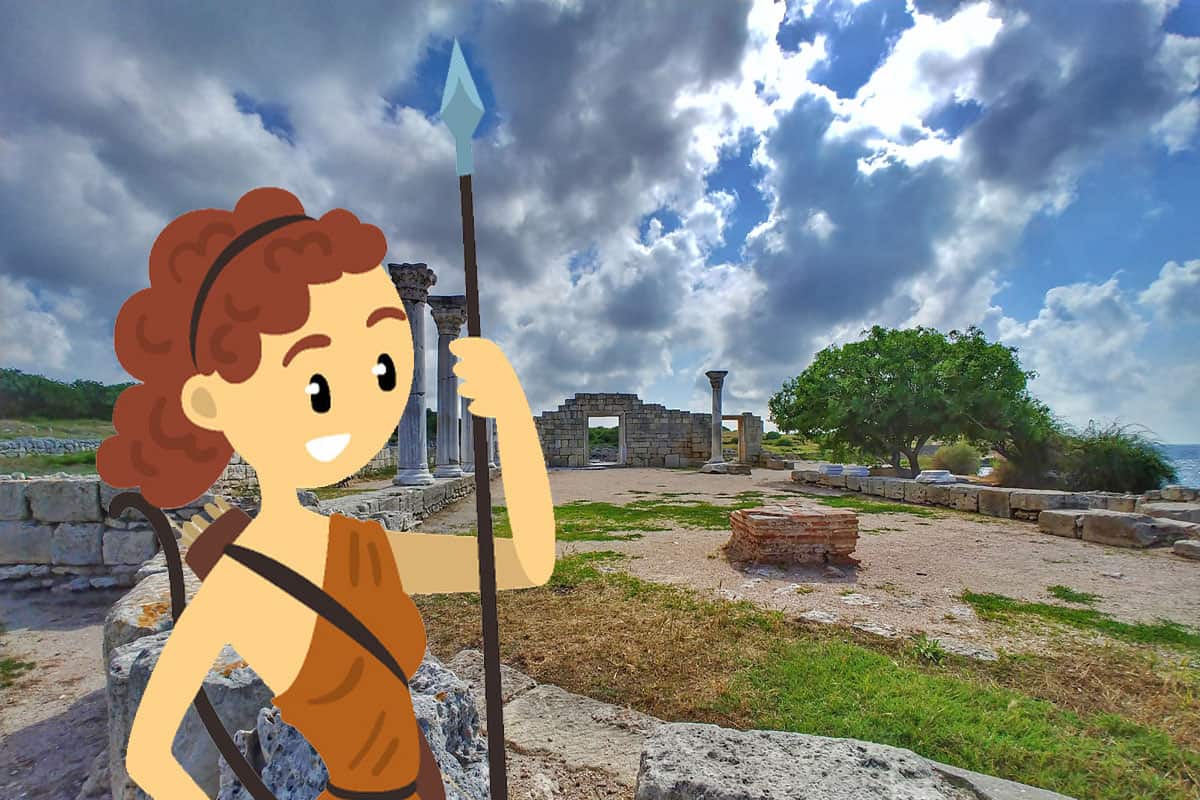 Artemis was the Greek goddess of the hunt, the wilderness, and the moon. She was the twin sister of Apollo and a daughter of Zeus. Her twin brother, Apollo, was the god of healing and the sun.

Artemis was known for shunning male romance and traveling with several female companions and handmaidens. Though she was a huntress, she also loved animals and was heavily associated with nature.

There were many stories about Artemis, as she was a favorite goddess, especially amongst young women. The myths listed below are just a few of the stories about the goddess.

Myths and Stories about Artemis

1. The Birth of Artemis and Apollo

Zeus impregnated Leto, who was a daughter of the Titans Coeus and Phoebe. Hera was furious to discover the pregnancy, and so cursed Leto so that she could never give birth while her feet touched solid ground.

When her birth pains started, Leto prayed to Zeus for help. Zeus enlisted his brother Poseidon to aid him, and together they led Leto to a floating island which was not attached to the earth below. There, she gave birth to Artemis. Artemis then acted as a midwife to help the delivery of her brother, Apollo.

When Artemis was a child, she sat on the lap of her father and asked him to make her ten promises. These promises would define her future as a goddess. Her ten wishes were:

Zeus granted all the wishes of his precocious daughter, and she took all of these things forward with her into adulthood. She was also gifted twelve hunting hounds, six male and six females, by the great nature god, Pan.

Orion was a great hunter and a close friend and possibly lover of Artemis. Though she scorned men in general, she admired Orion for his skill and kindness. He was the one of the only men to join her troupe of companions.

However, Orion became cocky and began to boast. He claimed that he was the greatest hunter in the world, and that he would be the one to kill every creature on earth. Gaia, the goddess and personification of the earth, sent a scorpion to kill him as punishment.

In some versions, Apollo was the one to kill Orion, as he was very protective of his sister and did not want her to break her vow of chastity with men. In others, Artemis herself shot him with her bow, torn between her love for him and her duty to nature.

After Orion’s death, Artemis and her mother Leto pleaded to Zeus to keep Orion alive in some way. Zeus agreed, and Orion was placed amongst the stars as a constellation.

Callisto was a nymph and one of Artemis’s hunting companions. She was sworn to scorn men just as all of them were. She loved Artemis, and was sworn to obey her.

However, Zeus desired Callisto, and he decided that he must have her. To trick her into consenting to his advances, he appeared to her in the image of Artemis. Callisto lay with him, and she became pregnant. In some versions, it was Apollo, not Zeus, who tricked Callisto.

After Hera discovered Zeus’s infidelity, she turned Callisto into a bear. In some versions, Artemis did this instead. Callisto’s son, Arcas, tried to kill the bear. Zeus stopped him and placed both Callisto and Arcas in the heavens as constellations. They became Ursa Major and Ursa Minor.

5. The Children of Niobe

Niobe was the queen of Thebes and the wife of Amphion. With her husband, she had fourteen children. She bragged about this, claiming that it made her better than Leto, who only had two.

Artemis and Apollo instantly swooped in to avenge their mother for the insult. Artemis found Niobe’s seven sons, who were playing sports. She killed all but one. Meanwhile, Apollo killed six of the seven girls, who died without a sound. Both twins used poisoned arrows.

When Amphion discovered his dead children, he killed himself. Artemis then found Niobe in her sorrow and turned her to stone along with her two living children.

Polyphonte was a granddaughter of Ares who did not want to marry a man. She fled from her arranged marriage with the goal of joining Artemis as one of her companions. However, Aphrodite, the goddess of love and beauty, objected strongly.

Aphrodite cursed Polyphonte to lust after a bear. Polyphonte mated with the bear and became pregnant with monstrous twins who became enemies of Zeus. Artemis, who did not know about the curse, was disgusted by Polyphonte’s actions and turned the animals of the wild against her.

Eventually, with the interference of Ares, Polyphonte and her family were turned into birds to protect them.

Chione was a daughter of the personification of the Evening Star, Daedalion. She was so beautiful that she attracted the attentions of a thousand men. She also was lovely enough to catch the eye of gods, and both Apollo and Hermes made love to her and gave her sons.

Chione was vain, and she bragged that she was lovelier than any goddess, specifically that she was more beautiful than Artemis. Artemis was outraged both by the insult and the blasphemy. She set about hunting Chione.

Hermes and Apollo protected her, but eventually Artemis found her and shot out her tongue with an arrow, rendering her mute.

8. Atalanta and the Calydonian Boar

Atalanta was one of the few Greek heroes who was a woman. Her mother died in childbirth and her father abandoned her to die through exposure. Artemis found the child and took pity on her.

The goddess sent a bear to allow the child to nurse, which gave Atalanta the bear’s strength and reflexes. The baby was then raised by hunters.

As an adult, Atalanta swore off men and became a dedicated follower of her idol, Artemis, on whom she modeled herself. Artemis was fond of Atalanta, and aided her on the hunt. Atalanta also fought along with the Argonauts.

The Calydonian boar was sent by Artemis to punish King Oeneus, who had snubbed her in his worship of the gods. It was a monster that ravaged the land. Atalanta joined the hunt to rid the land of it, and she was so successful that she was rewarded with its hide.

The Aloadae were two giants, twins named Otos and Ephialtes. They were the sons of Iphimedia, and though they took their patronymic from her husband Aloeus, their true father was Poseidon.

The brothers planned to storm Mount Olympus and steal goddesses. Ephialtes wanted Hera, Queen of the Gods, while Otos wanted Artemis. They planned to kidnap and rape them, then make them their wives.

The giants managed to capture Ares, who they trapped in a bronze jar for thirteen months. When the gods learned of this, Artemis offered herself to Otos in exchange for freeing Ares. As soon as Ares was freed, Artemis turned herself into a deer and jumped between the two giants.

They threw their spears simultaneously to try to kill her. However, they ended up spearing and killing one another instead.

Actaeon was a great hunter and a student of Chiron who was a friend and companion of Artemis. He was a famous hero before he joined the goddess. Though he was skilled, however, he also suffered from some hubris, often claiming to be a better hunter than even Artemis herself.

One day, he came across Artemis in the forest where she was bathing in a spring. Overwhelmed by her naked beauty, he approached her and attempted to ravish her. Artemis cursed him for the transgression, demanding he stay silent or else be turned into a stag.

Eventually, Actaeon spoke, unable to resist sharing the sight of Artemis’s loveliness. He instantly changed into a stag. His fifty hunting dogs caught his scent, and they started to chase him. After a few miles, they caught him and tore him apart.

The dogs returned home, struck with grief when they realized that their master was dead. Feeling sorry for the animals, the ferryman Chiron made a lifelike statue.

The Trojan War divided the gods of Olympus. Along with her brother Apollo and their mother, Leto, Artemis took the side of Apollo’s patron city, Troy. Artemis and Hera came to physical blows over this, as Hera sided with the Greeks.

When the Greeks set sail for Troy, Artemis used her power to still the sea entirely. It remained still until an oracle predicted that the Greeks could start the seas again by sacrificing the most precious possession of King Agamemnon. This turned out to be his daughter, Iphigenia.

The girl was put out to be sacrificed, but Artemis took pity upon her. She started the seas again and rescued Iphigenia, bringing her into her group and making her into a beloved companions.

Later, Apollo, Artemis, and Leto worked together to covertly rescue the Trojan hero Aeneas, who had been wounded by Diomedes and should rightfully have been dead.

Adonis was the most beautiful man to ever exist. He was the foster child of Persephone and the lover of Aphrodite, who gave him her heart. Artemis, who was often at odds with Aphrodite (who resented her for swearing off the love of men), already had many reasons to dislike him. Adonis compounded this by bragging that he was a better hunter than Artemis.

However, this was not the final straw. Adonis became a casualty of the enmity of the two goddesses. Aphrodite punished Hippolytus, a follower of Artemis who had sworn off love and preferred to hunt, by causing events that led to his death. Artemis took revenge for Aphrodite killing her favorite by sending a boar to kill Aphrodite’s own favorite – Adonis.

The bore gored Adonis and his blood became poppies. Aphrodite held him and wept as he died.

In some versions of the story, it was not Artemis, but Aphrodite’s jealous lover Ares, who sent the boar and caused Adonis’s death.

Artemis discovered a herd of golden does bigger than bulls. Even though they were female, they had large antlers made of gold. Their hooves were bronze, their hides beautiful and dappled, and their speed was unrivalled.

So enchanted was the goddess by these five animals that she yoked four of them to her carriage to serve as her steeds. The fifth she set free, always intending to have it return to her. This sacred deer traveled to the Cerynian mountains.

During the Twelve Labors of Heracles, the hero had to capture the hind and bring it back to Artemis. He knew that the doe was sacred and so wished to leave it unharmed. This led to a hunt that lasted well over a year.

Eventually Heracles had no choice but to maim the hind to capture it. In some versions, he shot it with an arrow, in others he captured it with a net. In one story, he even killed the animal. Heracles then begged clemency from Artemis and Apollo, who only let him free after he managed to convince them that he had no other choice but to harm the creature.

2 thoughts on “13 Artemis Myths and Stories: From Orion to Adonis”