Skip to content
Home » Zeus and Odin: What is the Difference? 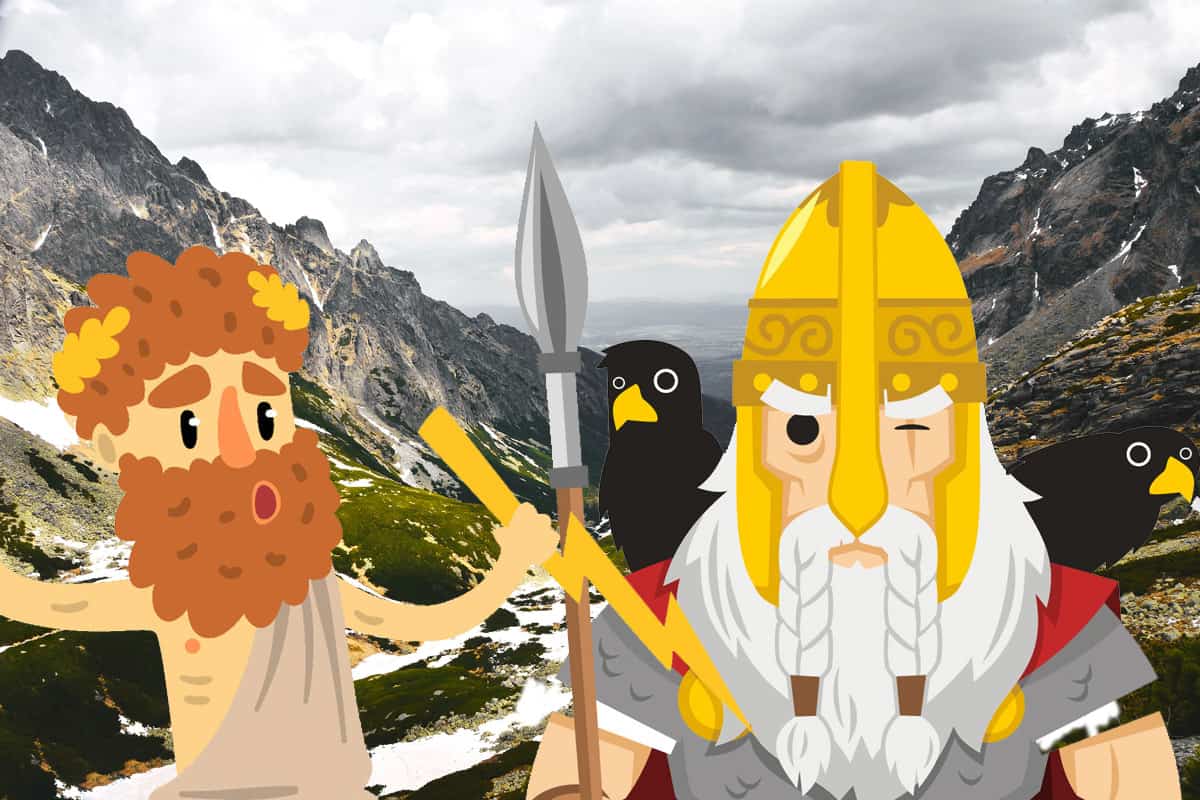 The Ancient Greek and Norse pantheons were two of the most well-known, and Zeus and Odin were the top gods for each of them respectively.

But how did these pantheon heads compare?

Though they were both leaders, there wasn’t much beyond the superficial which connected Zeus and Odin. Zeus was a god of brawn and might who, while crafty, was often outwitted. Odin, though mighty and indeed a god of war, was better known for his wit, intelligence, and wisdom. However, both gods were especially good at disguise and a little underhanded trickery! Though he had other lovers, Odin was also mostly loyal to his wife, who loved and respected him. The opposite is true of Zeus and Hera, who were always clashing over Zeus’s many poorly hidden affairs and illicit children.

What’s the difference between Zeus and Odin?

Zeus was the king of the Olympian gods and the father to more than half of them. His wife and queen was his sister, Hera, though he had several affairs with goddesses and mortals alike. He also had six wives before her, including Metis, who he swallowed whole.

His brothers were Poseidon and Hades and his other sisters were Demeter and Hestia. Their parents were the Titans Cronus and his sister Rhea, and their grandparents Uranus and his mother Gaia.

Some of his famous children included Artemis, Apollo, Hercules, Athena, Ares, Dionysus, Hermes, Helen of Troy, Perseus, and many others.

Odin was the head of the Aesir and a father to many sons. His wife was the goddess Frigg, though he also had other lovers and wives amongst the giants and goddesses. Most famous of these was Jord, mother of Thor.

His brothers were Hoenir, Ve, and Villi. They were the sons of Bestla and Bor and the grandsons of Buri, who was brought to life from ice licked by the cow Audumbla.

Odin was a father of many sons. His most famous were Thor, Baldr, Hodr, and Braggi and sometimes Heimdallr. Many other gods are called sons of Odin.

Zeus’s main role was king of the gods. He was also the god of thunder and the sky and known as Father of the Gods. He was the main character in several myths, usually involving his power or his children!

When he was born, his mother hid him from his terrible father who had swallowed the rest of his siblings. When he grew, he freed his siblings and led them to war against the Titans. He won, and the Olympian era began.

Zeus’s favorite child, Athena, was born after he swallowed her mother to avoid a prophecy. Metis’s pregnancy continued and Athena was born fully formed from Zeus’s forehead, clad in battle armor.

Zeus had a reputation for taking women as lovers no matter their marital state, species, or even – sometimes – interest in him. He fathered several children in different forms, including a shower of gold, a swan, an eagle, and an ant. He once even seduced a companion of his daughter Artemis, a sworn virgin named Callisto, by appearing to her as Artemis.

Zeus’s wife Hera often tried to punish the women with whom Zeus had affairs, though direct retribution against Zeus himself was dealt with very harshly. When Zeus’s human lover Semele got pregnant, Hera tricked Zeus into showing Semele his true form. This killed her instantly, but Zeus saved the fetus by sewing it into his own thigh. Later, the baby was born as the god Dionysus.

His anger was also great. He was known to throw bolts of lightning to express his displeasure and often punished humans he found lacking or offensive in some way. The first woman, Pandora, who released sin into the world, was a punishment to her husband Epimetheus. This was because his brother Prometheus had brought fire to humanity against Zeus’s wishes.

Odin was a god of many things, including wisdom, death, runes, healing, gallows executions, royalty, battle, sorcery, disguise, knowledge, and much, much more. It’s easy to see why he had the primary position amongst the foremost Norse pantheon!

He was a competitive god and often challenged others to battles of wit and skill. He was not always known to fight fairly or alone. He once challenged the jotunn (giant) Hrungnir to a horse race all the way from Jotunheim to Asgard. Hrungnir rode the golden steed Gullfaxi while Odin was astride Sleipnir. Odin bet his life on the win. He did win, and invited Hrungnir to drink, but when Hrungnir rebelled, Odin’s son Thor challenged and killed him.

Odin’s eight-legged horse Sleipnir is actually the son of Loki by a stallion named Svadilfari. The Aesir wanted to renege on a deal with a jotunn builder and so sent Loki in the form of a mare to seduce the builder’s horse. The builder was furious, and Odin sent Thor to kill him. Loki birthed Sleipnir as a result of the mating.

Sleipnir is not the only child of Loki’s whom Odin interfered with either! Hel, Jorgamund, and Fenrir were three monsters birthed by Loki’s lover Angrboda. Odin gifted Hel a realm of the dead where he locked her away, banished Jorgamund to circle Midgard, and bound Fenrir in chains. The last, at least, was justified: Odin was fated to die by Fenrir’s hand at Ragnarök.

The wisest of the giants Vafthruthnir once took on a disguised Odin in a riddle contest. Though it was said that Vafthruthnir could not be beaten, Odin changed the question pattern through intelligence and trickery and won the battle of wits. The giant did not retaliate, instead happily conceding to the intellectual might of the god.

Odin’s wisdom and patience clash spectacularly with Zeus’s impulsive vengeance. However, it would be remiss to say they had nothing in common!

Both of them were leaders, and both sired many children. Their power came from their role as ‘all-father’ – an epithet which they both shared. They were also both proud and prone to vanity and tests of skill. Despite their disparities, Zeus and Odin weren’t so different after all!