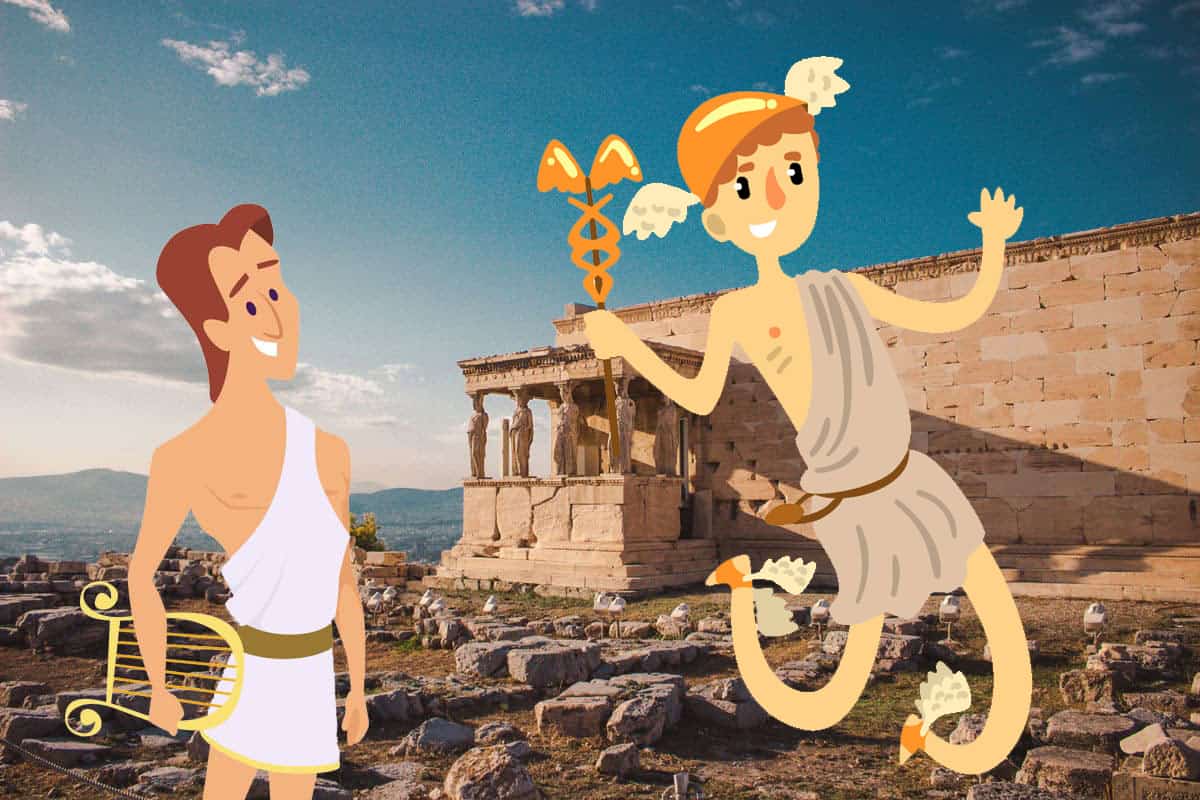 Apollo and Hermes were brothers, friends, and rivals from a few days after Hermes was born. They shared a love for music and adventure.
But how did these gods compare?

Apollo was often a god on the forefront. He was one of the few gods to keep his name and aspects when the Greek gods became Romanized – Hermes became Mercury, Apollo’s sister Artemis was Diana, and Zeus himself became Jupiter, but Apollo kept his name. Hermes, meanwhile, operated as a ‘background’ Olympian. He was often dismissed as little more than a messenger, but he used this power to interfere in much wider events and operate to his own agenda. In this way, despite their differences, both of these gods shared a level of influence beyond even most Olympians except Zeus.

What’s the difference between Apollo and Dionysus?

Asteria was Leto’s sister and Apollo’s aunt. He also had aunts and uncles on his paternal side, including Demeter, Hera, Hestia, Hades, and Poseidon. He also had several siblings apart from his twin sister, some of which were Athena, Hermes, Ares, Dionysus, and Hercules.

Apollo had countless lovers, some of the most notable female ones being Daphne, Hecuba, and all nine of the muses. Some of his most famous male lovers were Hyacinth and Adonis. He also sired many children, with the most well-known being Orpheus and Asclepius.

Hermes was the only of Zeus’s illegitimate children that Hera favored. Zeus sired him with Maia, a Pleiad, daughter of Atlas and Pleione. He had six aunts on his maternal side, the remaining six Pleiades. He also had aunts and uncles on his paternal side, including Demeter, Hera, Hestia, Hades, and Poseidon. He also had many siblings, some of which were Athena, Artemis, Apollo, Ares, Dionysus, and Hercules.

He had a number of consorts, most notably Aphrodite and Peitho. The latter is sometimes mentioned as his wife. Other myths state that Hermes stayed unwed and took several lovers, including Perseus, Chione, Myrto, and Merope.

He sired several children, some of which were divine and others that were mortals. Some of the most well-known of his children are Hermaphroditus, Evander, and Pan.

In some myths, his parents are Uranus and Hemera.

Apollo was the sun god, taking his reins from the Helios. He was also the god of music, prophecy, and healing, as well as the patron of dance. He was also a poet and, like his twin, an archer. Apart from that, he was also significant as a pastoral deity and was considered the patron of shepherds

Both he and his twin, Artemis, were famed for the love they had for their mother, Leto. Hera, in her jealousy, often made her a target. Apollo slew many monsters and humans in order to protect Leto, including the giant Tityos, Niobe’s sons, and Python, the serpent-dragon.

One of Apollo’s male lovers, King Admetus, was known for his justice and hospitality. Hades complained to Zeus about Apollo’s son Asclepius for resurrecting the dead and therefore stealing his subjects. Zeus feared that Asclepius might teach other humans how to bring the dead back to life, so he struck him with a thunderbolt and killed him. Apollo, angered by this, killed the Cyclopes who had crafted Zeus’s thunderbolts. Zeus, in turn, banished Apollo from Olympus, sentencing him to live a year as a mortal in servitude to another mortal, so he was sent to Admetus to be his herdsman. After Apollo returned to the heavens, he assisted Admetus to marry a princess, Alcestis. Apollo also got the Fates drunk so that Admetus would live past his fated death.

Apollo is also associated with two types of the lyre. One is the tortoiseshell, that was created by Hermes and was gifted to Apollo after Hermes stole Apollo’s cattle. The other is the most common one. It was invented by Apollo before the incident with Hermes, but the sun god tore its strings in penitence for his own faults.

Apollo also had several musical competitions with both gods and mortals! The most notable being the ones with the god Pan, the satyr Marsyas, and Cinyras of Cyprus. He was the winner of all of these matches.

Apollo employed the Oracle of Delphi to command Orestes to slay his own mother, Clytemnestra, to avenge the murder of Orestes’s father, Agamemnon. Orestes followed through and was put on trial to be judged by the gods. Apollo defended Orestes, and in the end, Athena judged that the hero was innocent.

Hermes was the messenger of the Gods and an advisor to Zeus. He was also a psychopomp for Hades. He was the patron god of thieves, messengers, travelers, merchants, and tricksters.

Knowing that Hera reacted badly to Zeus’s illegitimate offspring, Hermes disguised himself as Ares, and so Hera nursed him, thinking he was her own son. This led to the two bonding despite him being her step-son. Hermes often took advantage of this bond, saving Dionysus from Hera’s wrath, as well as Io, Zeus’s lover.

Hermes was friendly with the humans and felt closer to them than most other Olympians. He sided with the Greeks during the Trojan War. However, he still protected King Priam of Troy when he went into the Greek camp to claim his son’s dead body.

As a baby, Hermes decided to steal some of Apollo’s sacrificial. Apollo was greatly angered but couldn’t prove that Hermes was the culprit. Zeus was involved, but Hermes managed to propose a deal – he gifted Apollo with a lyre he had just invented in exchange for getting the charges dropped. Following this deal, the two gods were friendly from then on.

Hermes was one of the many gods that helped Odysseus during his travels. He was the one that warned Odysseus about Circe’s deceit and also the one who brought Calypso the decision of the gods that she must release Odysseus. He also accompanied the souls of Penelope’s suitors to the Underworld.

Friends and rivals, Hermes and Apollo both shared the gift of a silver tongue and a vast array of dominions over which they each ruled. While Hermes’s role as a messenger and psychopomp often took him to the Underworld, Apollo’s job as a sun god took him to the skies. Both, however, would often meet in the middle – on Earth. The brothers’ shared wit made them a perfect contrasting pair.