Skip to content
Home » Shiva vs Zeus: What is the Difference? 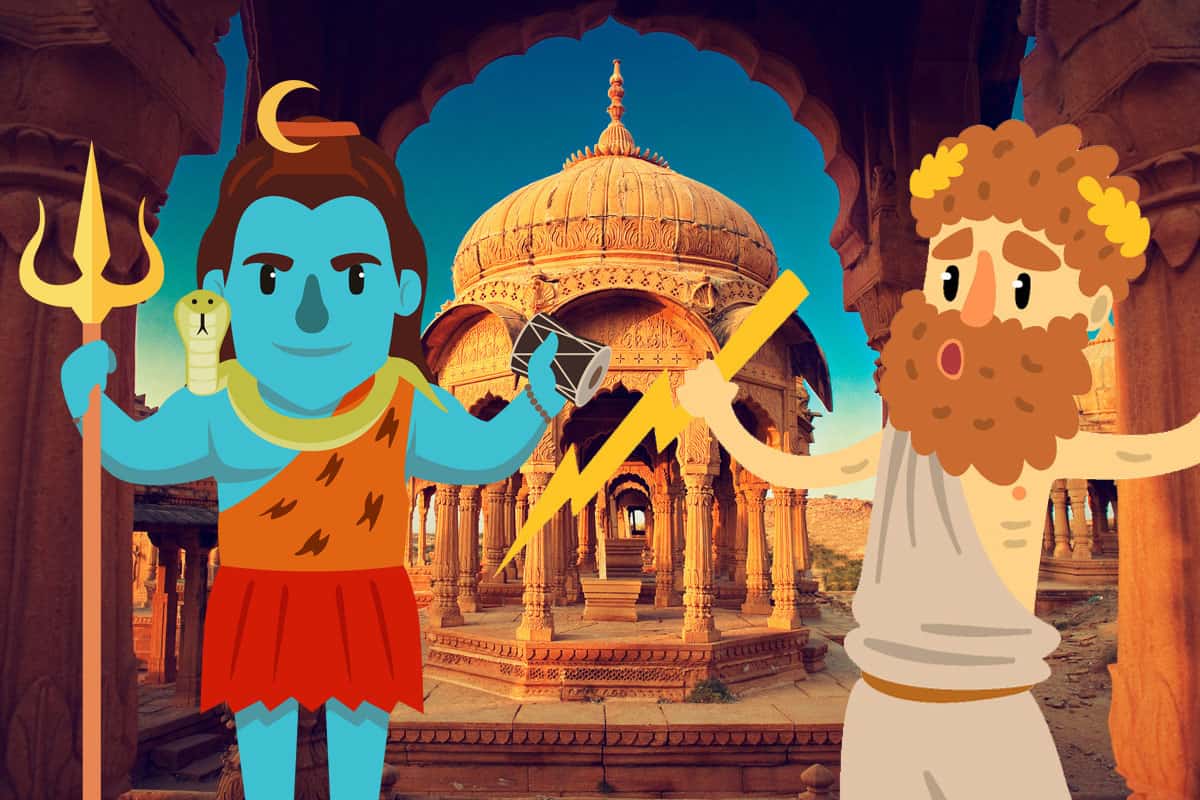 Gods are but entities possessing ultimate and immense power and no two other gods have been frequently considered as being the most powerful gods in their respective Pantheons as much as Shiva and Zeus.

Shiva and Zeus are significantly different from each other because their origins and the nature of the narratives that add to their legend are quite different themselves. While Shiva might have been created with some similarities to a tribal deity Rudra, Zeus has been part of a legend that involves familial wars. Also, the fact that Zeus has a similar analogy in Indian Mythology in the form of Indra, makes the difference between Shiva and him quite vast.

In their respective pantheons, Shiva and Zeus usually capture the apex in the order of importance of all gods. However, they are very different from each other culturally. Here are a few differences between them.

What is the Difference Between Zeus and Shiva, Really?

Shiva, or Mahadeva as he is also known, is considered one of the Trimurti, a trinity of Hindu gods that control all of existence. However, Shiva’s roots may be non vedic, or even an amalgamation of several pre-vedic tribal deities and some post-vedic appropriations. Within the Shaivism belief system, Shiva is thought to be the supreme being responsible for the creation, preservation and destruction of all existence.

Shiva has also been interpreted in several different ways, by different belief systems, but predominantly, Shiva is depicted as a calm yogi who settled in the Kailash Mountains. Another popular depiction of Shiva involves his furious destructive form where he destroys everything that is evil.

Zeus is the epitome of supreme power in the Greek Pantheon of gods, and is the king and ruler of the gods residing in Mount Olympus. He is considered to be quite similar to several other gods from different pantheons, like Indra, Thor, Perun and his Roman equivalent Jupiter. The name Zeus is a derivative or rather, a Greek version of the Proto-Indo-European god of the sky, called Dyeus.

Legend has it that Zeus fought his father Cronus and forced the babies he swallowed out of his stomach, thereby freeing the Hecatonchires and the Cyclopes. Cyclopes eventually gave him thunder and lightning as a gift, and eventually, with his brothers and sisters, and the Hecatonchires and Cyclopes, he defeated Cronus and the other Titans in a battle known as Titanomachy.

Shiva has a family consisting of his wife Parvati and children, Lords Ganesha and Kartikeya. Furthermore, Shiva also has a lot of close devotees that are by side all the time in the Kailash mountain. One of them includes the sacred bull Nandi.

While Nandi is depicted as a bull in most accounts, there exists versions of an anthropomorphic and human Nandi. Furthermore, since Shiva is considered a part of the Trimurti, several accounts of their creation claim a brother-like relationship between Shiva, Vishnu and Brahma.

He is said to be the son of Rhea and Cronus and his wife is said to be Hera in many versions. Their children include Ares, Hebe, and Hephaestus. However, it is also said that in the oracle of Dodona, his wife was Dione and that they had a child named Aphrodite.

Zeus is known for his constant romances with other women and is therefore also father to several other Greek gods at Olympus including Hermes, Apollo, Artemis, Athena, Persephone, Dionysus, the Muses, Helen of Troy, Heracles and Hermes. His siblings were swallowed by Cronus, his father after their birth from fear of being overthrown after they grow up. Zeus eventually defeated his father with the help of his siblings – Poseidon, Hera, Hades, Hestia and Demeter.

Shiva is usually depicted as having matted hair and as an ascetic figure, owing to his yoga prowess. He is also quite popularly iconographic in that there are several elements of his appearance that are strong symbols in Hindu Worship. He adorns a crescent moon on his hair, and is said to possess a third eye. He is only known to have opened it once when extremely angry, according to legend.

Kamadeva, the god of desire and love was burnt to ashes due to his third eye opening. Shiva is also known to have a blue throat, or neck, owing to his drinking of the Halahala venom during the churning of the ocean by the gods. He wears tiger skin, carries a trident with a dhamaru (small drum) attached to it.

Zeus appears in most accounts of Greek Mythology with a lightning bolt held in his hand as he is the god of thunder and lightning. Some of the other symbols associated with Zeus include a bull, an oak and an eagle. He is usually depicted either standing, walking with the thunderbolt ready to charge, or seated.

He is also sometimes shown with a scepter, owing to the cultural connections of his roots with other eastern traditions. There also exist paintings and artwork that show him with his wife Hera, and some others where he presides over the gods at Mount Olympus.

In Shaivism, the belief that claims that Shiva is the ultimate being, he is considered to be the sole creator of all existence and is also the preserver and the destroyer. In other traditions, however, Shiva is still a very strong entity capable of great destruction.

Despite being an ascetic yogi and a familial deity who stays with his wife Parvati and children at Mount Kailash, there are several depictions and accounts of Shiva furiously destroying evil, with ultimate power. His trident is a very strong weapon and he also possesses the third eye, an ultimate destructive force.

Zeus being the god of thunder and lightning, is capable of controlling them and channeling them like a weapon. Furthermore, since he is considered the king of all gods, he is also powerful enough to control and preside over other gods, advising them on matters. Also, Zeus is a very powerful warrior and was a crucial part of defeating his father Cronus in the war against the Titans.

2 thoughts on “Shiva vs Zeus: What is the Difference?”