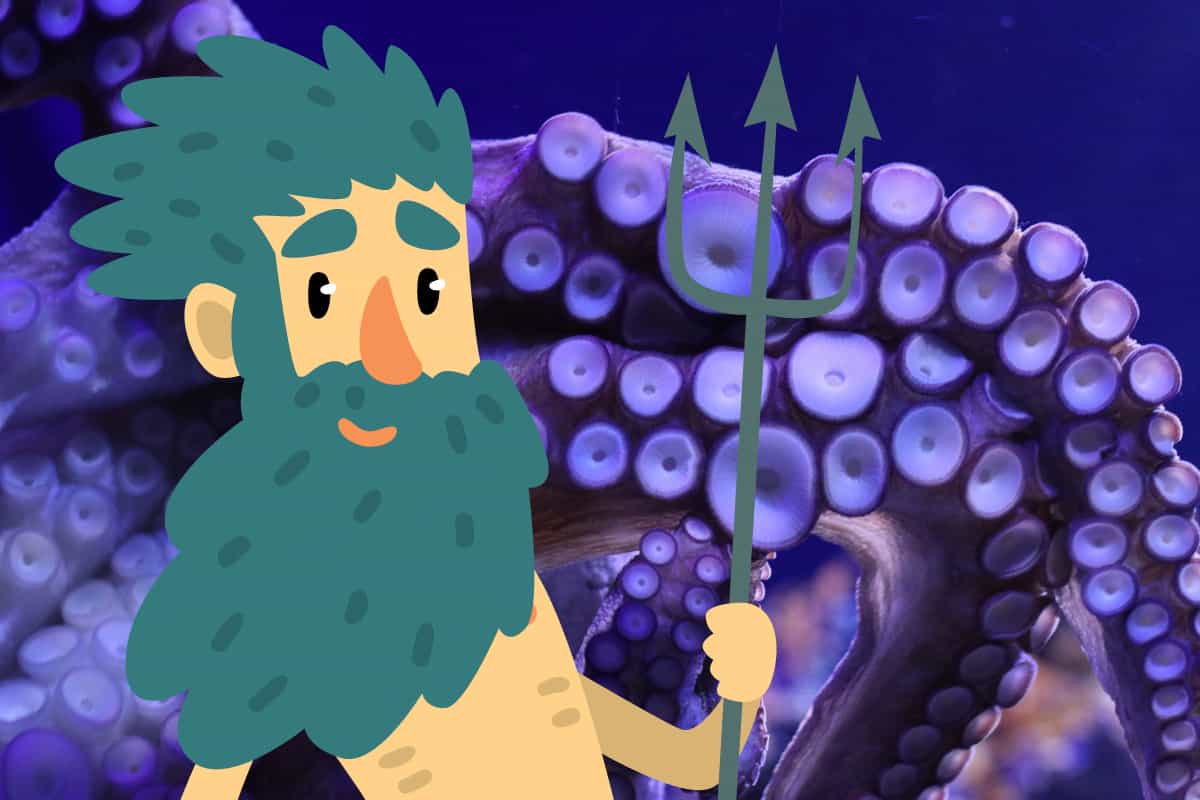 One was known to protect seafarers. The other set out to kill them. Unfortunately, they don’t come from the same mythology as they would have made perfect enemies. Of course, we’re speaking of Poseidon, the Greek god of the sea, and the Kraken, a giant sea monster of Scandinavian origin.

There is not much comparison that can happen between a god and a sea monster. The god ruled the sea, could calm the waves or bring forth her wrath. Sailors worshiped him for safe passage. Sure, he might have had a tendency towards violence from time to time, but Posiden was still a god. And the Kraken was still just a monster. This cephalopod of Norwegian lore was believed to be able to swallow entire ships whole. Maybe the biggest difference is that while there is no evidence that Poseiden ever lived amongst mortals. There is some evidence that a creature, not unlike the Kraken, once did exist.

But don’t worry. Even if the Kraken had once existed, there is no evidence that it still would. But if you had to choose who to try your hand with, would it be Poseidon or the Kraken?

What is the Difference Poseidon and the Kraken?

See him standing on a rock as the sea waves whip around him. His well-toned and muscular chest, pale and bare, will be dripping with salty seawater. In one hand he’ll hold his iconic trident, raising it up to either bring for the fury of the sea or to calm it, and his long, white beard will be flying behind him with the force of the wind. This is how the Greeks saw Poseidon. He was a fierce warrior who controlled the sea and generally speaking, was not to be crossed. Associated with dolphins and hippocampus or seahorses, paintings, sketches, and pottery depictions of Poseidon would often include these creatures or his palace on the seafloor.

Poseidon was one of the twelve Olympians and brother to Zeus and Hades. Born to Rhea and Cronus, Poseidon was fated to be swallowed immediately upon birth by his father in an attempt to thwart a prophecy. If Greek mythology teaches anything, it’s that you can’t escape prophecies but Cronus tried nevertheless. This prophecy in particular said that Cronus would be overthrown by his own children.

Eventually, Zeus was born and ultimately raised in secrecy. When he was old enough to take on Cronus, he did and forced him to return his siblings. They then banded together to overthrow Cronus and fulfill the prophecy. Once they had secured victory and taken over Olympus, the three brothers drew lots to determine who would rule the skies, the Underworld, and the sea. Poseidon drew the sea and as such became the god of the seas.

The Kraken on the other hand is no such god. In fact, he likely put the fear of God into many sailors. Contrary to contemporary misconception, the Kraken stems from Norse mythology rather than Greek. The notion that the Kraken is Greek in origin likely stems from the 1981 movie Clash of the Titans in which the giant sea monster was called the Kraken.

The earliest mentions of the Kraken belong to the Norse but Swedish and Icelandic folklore also have accounts of this large beast. These descriptions start out referring to the Kraken as a crab-like creature with large, spiny appendages coming out of his back. Over time, accounts shifted to describe the large cephalopod creature commonly pictured today. It was believed to be the largest monster in the sea and set upon swallowing ships whole. The Konungs skuggsjá, an ancient and anonymously written account of the creature says that it would stay ‘submerged for days, then rear its head and nostrils above the surface.’ This author would continue to explain that it would stay that way for days and swallow anything whole, including the boats that could sail right into its mouth.

Such a large creature probably doesn’t need any additional magical powers. Nonetheless, it is notable that he doesn’t have any. The Kraken is one of the few mythological creatures of Scandinavian mythology that doesn’t possess supernatural powers. Maybe that would have made it too powerful.

— How Humans Saw Them

Within the lore and stories, Poseidon had as much a temper and hard head as his brother Zeus. Generally speaking, getting on Poseidon’s bad side did not go well. It is believed that in his anger he would strike his trident into the earth causing it to shake. This is where the Greeks believed earthquakes would come from and why they worshiped him as the god of earthquakes.

Despite his temper and violent tendencies, he was a favored god. In Athens, he was second only to Athena herself. In Corinth and Magna Graecia, he was worshiped as the primary deity and it was believed he would calm the seas and keep their sailors safe.

While there were those who loved Poseidon, the Kraken was just feared. There was no love of the Kraken. There was only the fear of getting swallowed whole at sea by it. Fun fact – there is some evidence that a Kraken-like creature once existed. But just because one might have existed, does not mean it still exists. Called Ichthyosaurs, these extinct whale-like creatures were absolutely massive. Dating back to the Mesozoic era, they could grow up to 20-meters long or 66-feet. Fossils of these beasts have shown signs of constriction which is a squid’s preferred method of killing. This means that some kind of, probably squid-like creature, had to be significantly larger in order to wrap around and squeeze one to death.

Chances are it didn’t exist when the Ancient Norse were out sailing but it’s not impossible. Old sightings of the Kraken were more likely a combination of sailors seeing large squids – which can grow up to 13 meters long – coupled with the hallucinations brought on by scurvy.

Both Poseidon and the Kraken make an appearance in the 1981 film Clash of the Titans. Poseidon also commonly shows up in the Percy Jackson & the Olympian young adult book series. He is also the namesake of many military-grade naval weapons.

The Kraken is probably most notable in popular culture as the sea monster in Pirates of the Caribbean: Dead Man’s Chest or At World’s End. Generally speaking, large squid-like sea monsters that show up in contemporary film and literature are likely based in some part on the Kraken.