Skip to content
Home » Who were the Nymphs in Greek Mythology? 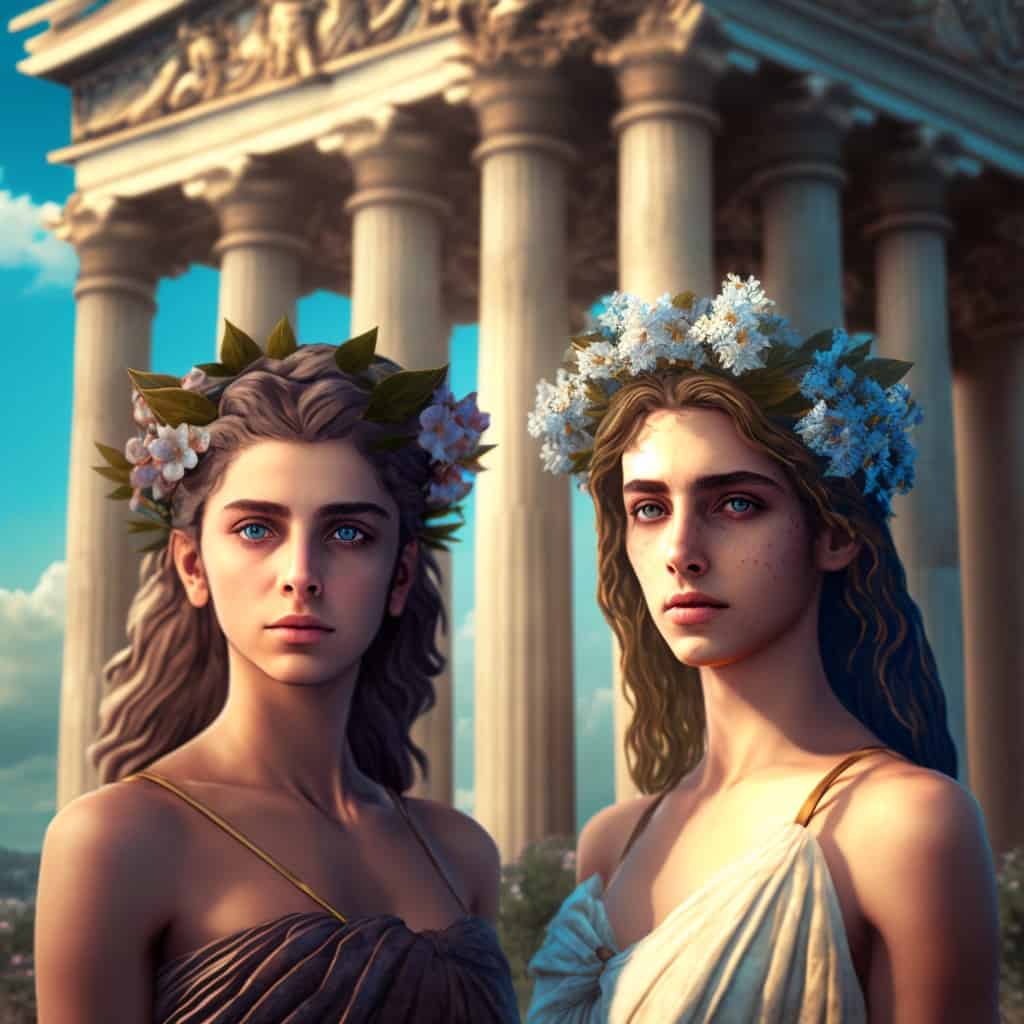 The Nymphs, also known as the nymphai, were minor nature goddesses that could be found all around the globe according to Greek mythology.

Despite being regarded as lower than the gods and goddesses of Olympus, they were still summoned every time an official meeting was held between them.

Even without actually being goddesses, the Nymphs presided over natural phenomena such as clouds, trees, meadows, beaches and even springs.

This is why in most stories you’ll find them watching over the plants and animals in their domains. They are also seen accompanying the Olympian gods of nature such as Dionysus, Artemis, Hermes, Demeter and Poseidon.

There are also male versions of the nymphs that are known as the Satyrs, Panes, Tritons and the Potaloi. While they are not as popular as the Nymphs were, they are still seen a lot of the time guarding their domains from any foes that wish to harm nature.

But alas, there are a lot of different classes of Nymph that you should know about, as well as plenty of stories in which they took front stage. This is why for today we decided to give you a brief rundown of who the Nymphs were and more importantly, what their role in Greek mythology was.

So, let’s start off with the basics:

The Classes of Nymphs 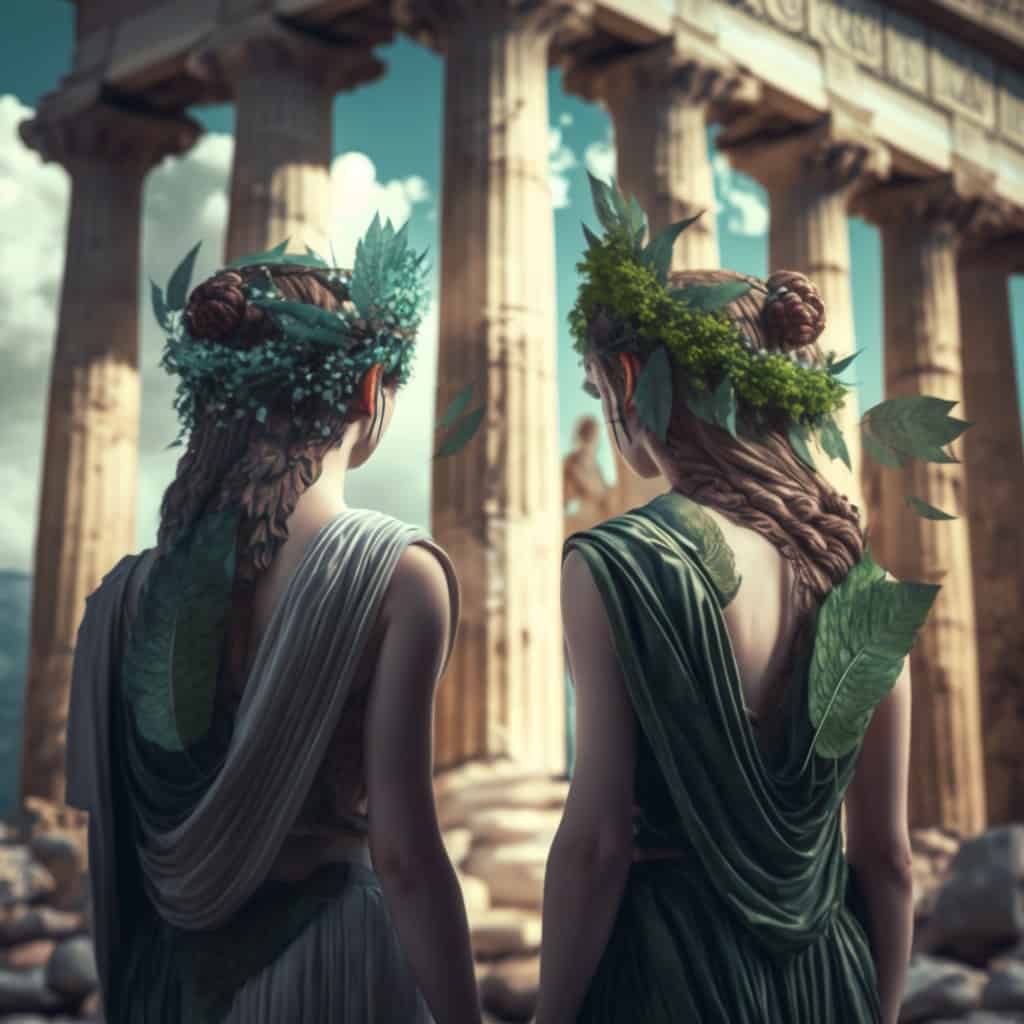 There are a lot of classes of nymphs that we need to cover here, so let’s not waste any more time and instead just hop right into them:

The Nymphs Were Everywere 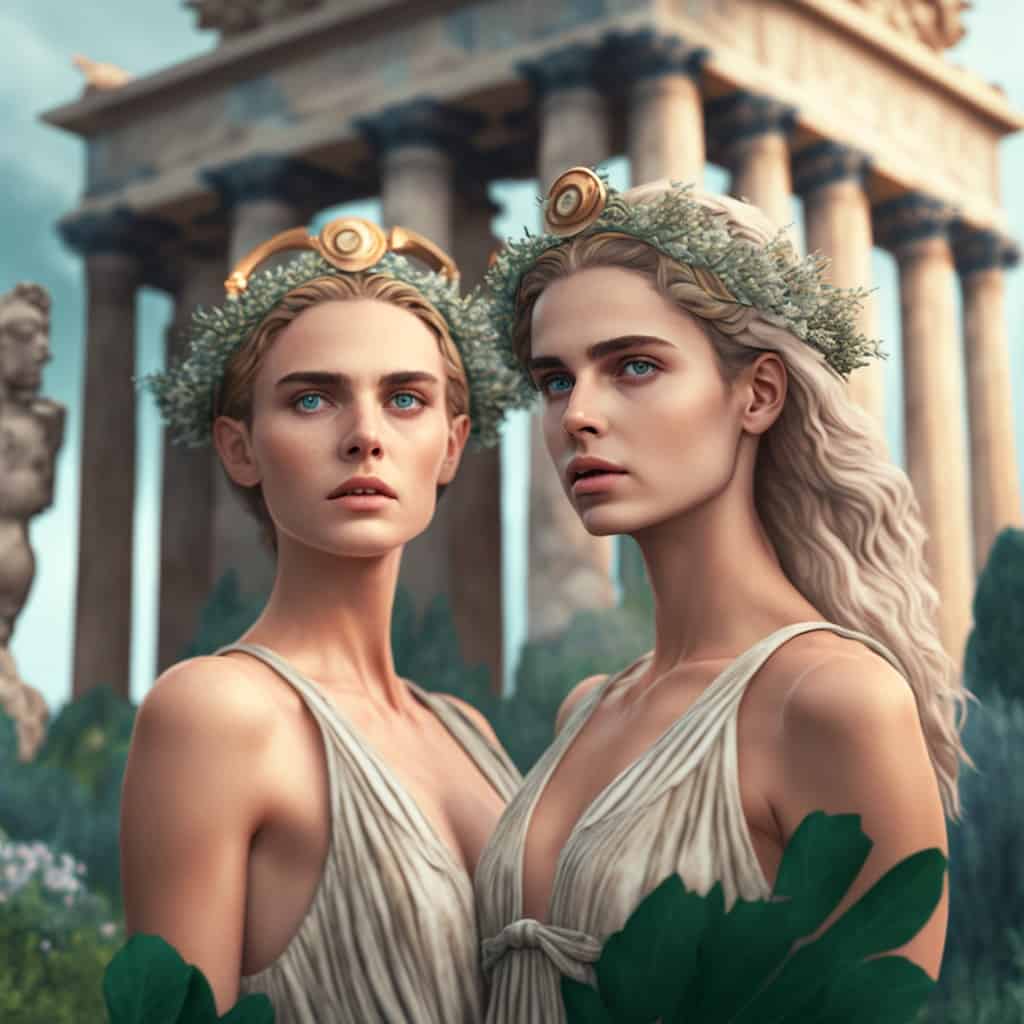 Interestingly enough, while the nymphs were never the main characters in the stories, they were spread out enough to be found everywhere you looked.

In most stories in fact, you could see the beautiful nymphs presiding over their domains, making sure that no wrongdoers made their way there.

If you’ve ever seen a magical tree in a sacred grove for example, chances are that that was actually a tree that was created by a nymph that lived there.

Whenever a character would wander off into the woods for example, they’d meet up with nymphs along the way.

Some nymphs would be helpful, others would just run off as soon as they’d come across any trespassers.

At the same time, the nymphs are usually portrayed as invisible to mankind, although it is also said that if one is worthy of seeing a nymph, then chances are that they will come across one in their journey.

They reigned over all natural phenomena, including rocky beaches, clouds, caves and even meadows. To put it bluntly, if you ever came across a magical natural phenomenon, chances are you were looking at a nymph.

They were responsible for keeping all fauna and flora alive, and as such it is said that any place full of greenery was overseen by one such nymph.

On top of that, some nymphs were also associated with the Olympic gods, like for example Zeus, Hermes, Poseidon, Dionysus, Demeter and even Artemis all had nymphs serving them.

By far the most famous nymphs around though were Artemis’s. These were the Pleiades, aka the seven sisters that were immortalized by Zeus himself later on down the line, transforming them into the Pleiades constellation. 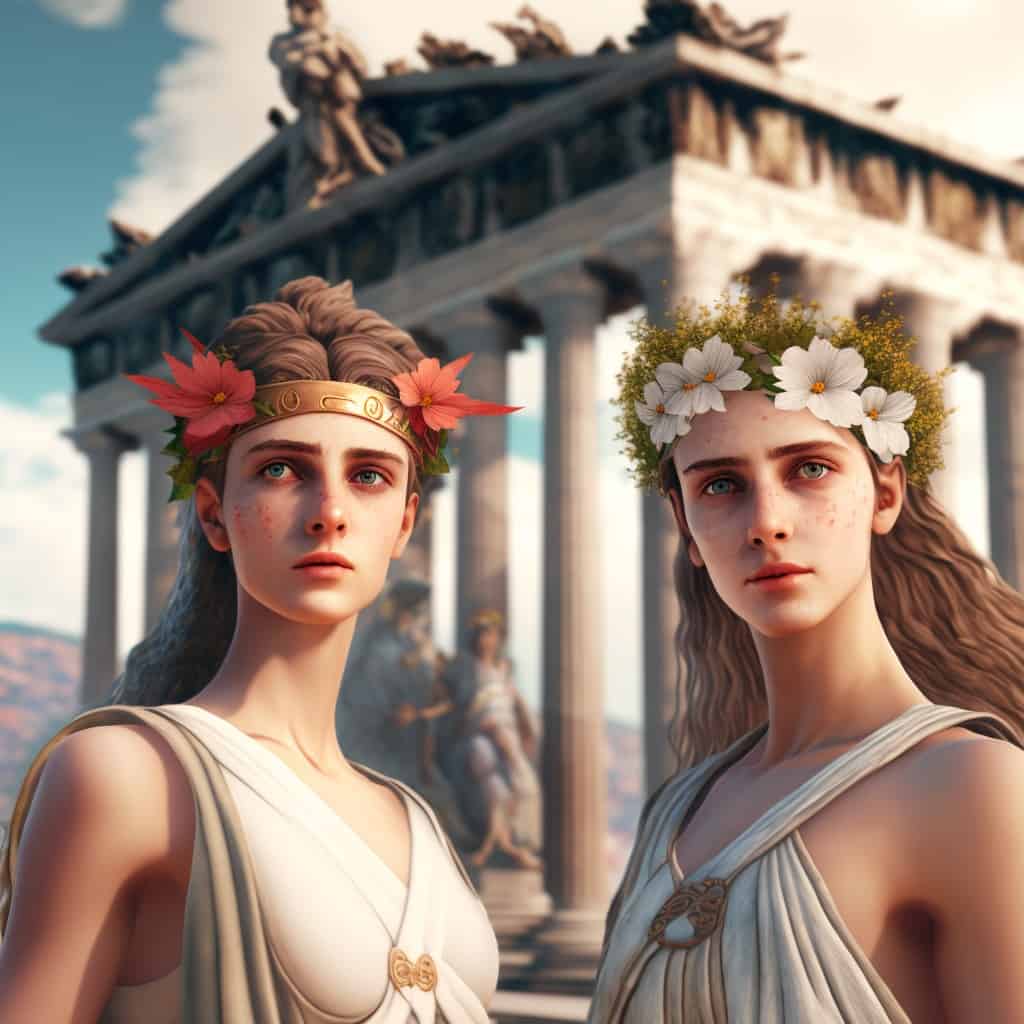 Interestingly enough, the Meliads were the most barbaric of the nymphs, with them taking pleasure in killing and maiming their foes.

They were so deadly in fact that even Zeus himself feared them, as he decided that he wouldn’t give them the opportunity to attack the gods, destroying them all one by one in a flood.

Next up we have the Dryades and the Hamadryades. The Dryades were known for living in woods and deep forests, with the most famous one being known as Daphne.

She was known as the protector of laurel trees, but sadly her story would end abruptly as the god Apollo would later on fall in love with her.

This is a problem because as is common for Greek mythology stories, Apollo wouldn’t take no for an answer, chasing down the Dryad with all of his might.

Daphne’s father couldn’t just sit idly as his daughter was chased around all day long, so instead he decided to turn her into a laurel tree as Apollo grabbed onto her.

The spell worked and even the mighty Apollo couldn’t revert it. In honor of his love for her, Apollo decided to create laurels as far as the eye could see.

The Hamadryade on the other hand were the nymphs that were bound for life to a tree. The two would be created at the same time, and as soon as one of them perished the other would also soon wither down to dust.

A very powerful image depicting this can be seen in a lot of Greek stories, as warriors that would dare to cut down the trees from the scared grove would instantly notice the fact that blood would start flowing from the cut.

The Nymphs and Achilles 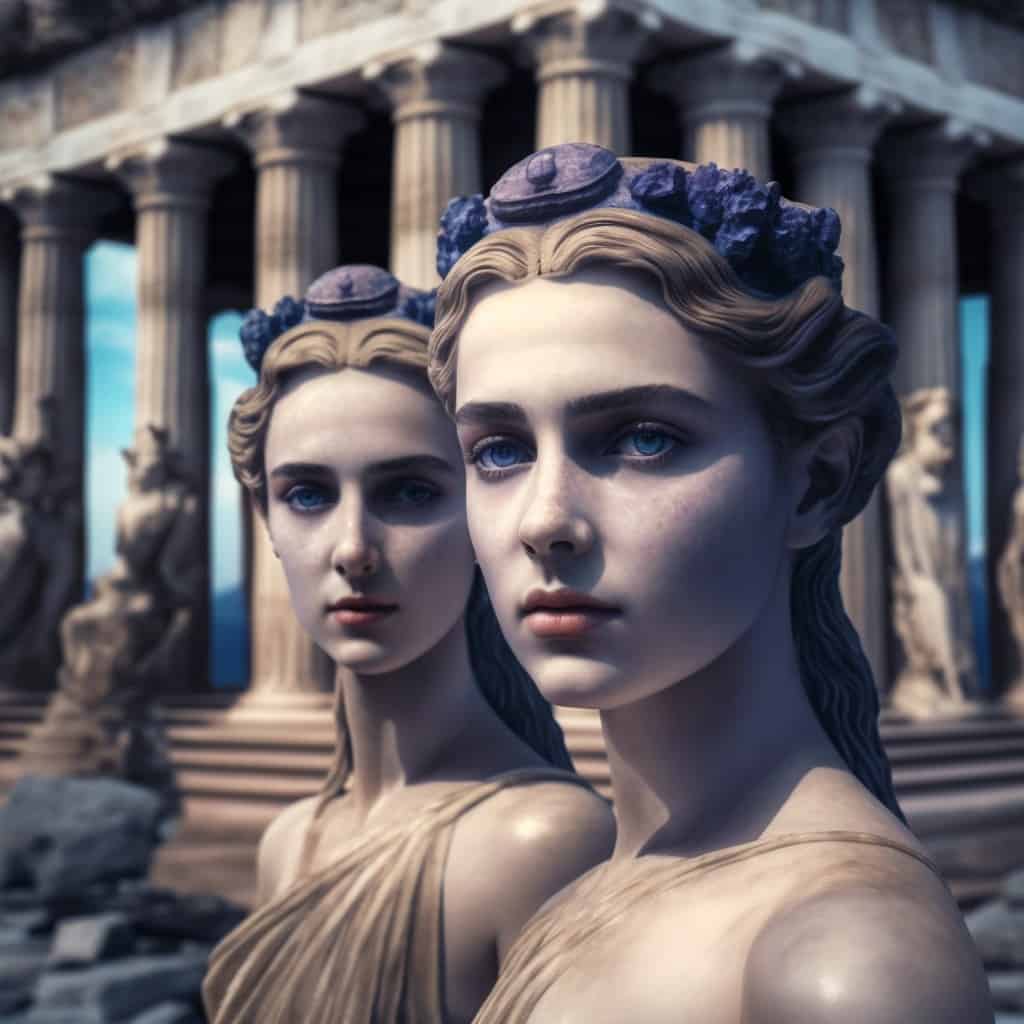 One of the most popular stories revolving around the nymphs centered around the famous warrior Achilles.

That’s because it is believed that his mother was actually a sea nymph known as Thetis. She was actually the one that decided to dip baby Achilles in the river Styx.

This would in turn make him almost completely invulnerable, with the one exception being the heel that she grabbed him from so that he would not be taken by the river’s flow.

His invulnerability would in turn help Achilles become the greatest warrior of his time, but sadly even he would lose his life as another warrior named Paris would shoot an arrow directly into his heel, killing him instantly.

This is actually where the famous phrase “to have an Achilles heel” comes from, as Achilles was completely invulnerable except if he were to be struck there.

The Most Powerful Nymphs of Ancient Greece 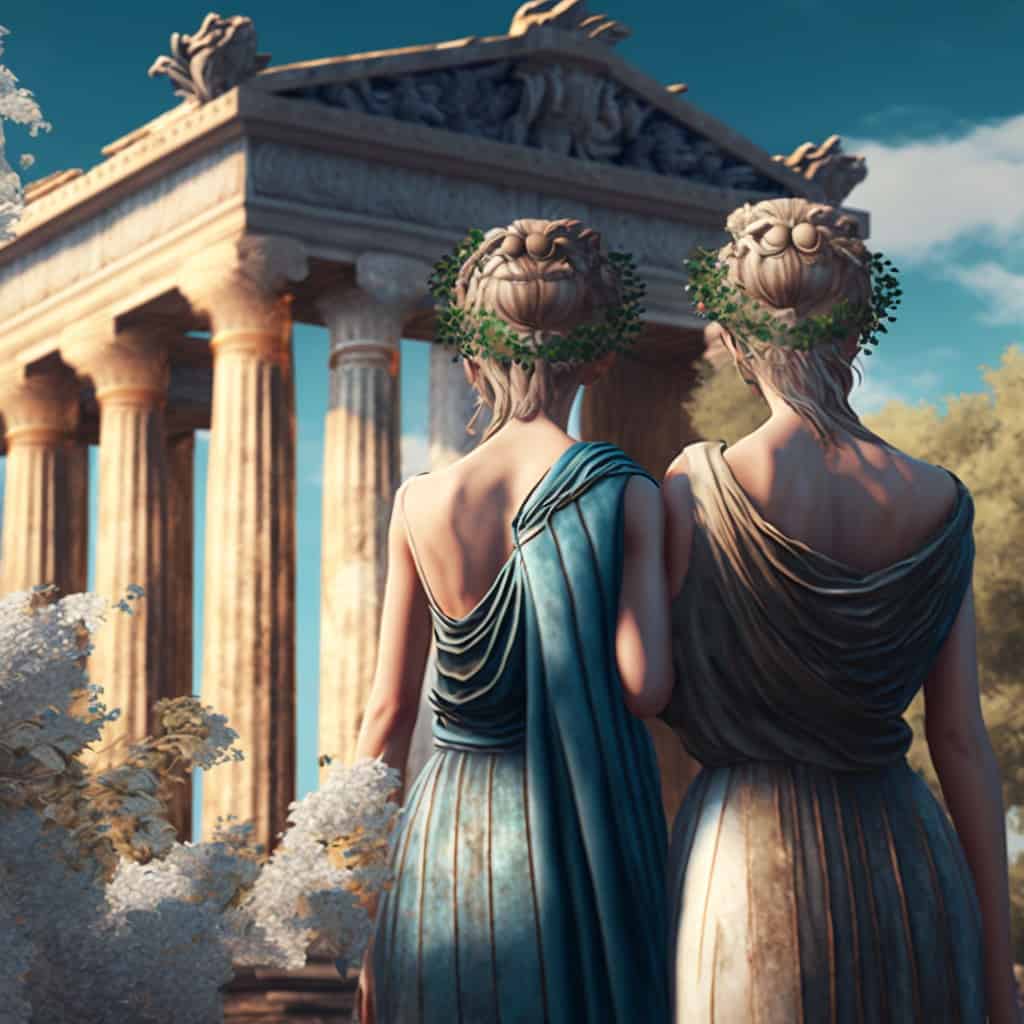 As mentioned previously, the nymphs were usually seen as the protectors of mother nature, but even so, we rarely hear about nymphs that took down major warriors all on their own.

In fact, most nymphs would rather cower and run away with their tail between their legs than to fight for their domains.

Interestingly enough though, there were also more than a handful of nymphs that were known for their incredible feats of strength, to the point where they would even be hailed as goddesses of their domains.

By far the most popular nymphs from this category are Circe and the sea nymph Kalypso. They were the ones that helped Odysseus surpass his trials and make it back home after the Trojan War.

Circe is believed to have been the mother of Odysseus’s child, while Kalypso is known for having given him two babies during his seven years stay on her magical island.

In some cases, the nymphs were simply taken as the lovers of the male Olympians, while in others they would serve under the gods fighting alongside them.

A good example of that is Artemis and her warrior nymphs, as they would hunt together day and night to put food on the table.

There were also plenty of nymphs that were known for seducing humans. The water nymphs for example became well-known for just how seductive they were, bringing mortals over to deep water only for them to be drowned by the femme fatales.

As such, it is believed that Greek mothers would often times warn the young men to never follow the whispers of the beautiful water nymphs.

The story of Narcissus is by far the most popular one of the bunch here, as he is said to have fallen in love with his own image in the water.

The water nymph would cry out to him, revealing herself in her entirety, only for him to completely dismiss her as he was too taken by his own reflection to notice her.

Interestingly enough, the nymph, upon seeing that she was rejected, would end up being heart-broken for the rest of eternity.

Her name was Echo, and it is said that if you ever hear a whisper running down a stream in the deep woods, chances are that you are hearing her repeatedly sing out to him: “Oh beautiful boy, I love you in vain.”

Regardless of how you spin it though, nymphs were about as different from one another as you and I are. There were good nymphs and there were bad nymphs.

In most interpretations the nymphs would be seen as lawful protectors of their domains, while in others they would be the ones to lead young men to their deaths.

They were never the main focus of the stories either, but they were always in the back, protecting their groves and making sure that no matter what, no mortal dared to step foot in their place.

Some nymphs fell for humans, but most of the time it was the other way around. Very rarely did this actually work out for the two, as in most cases the nymphs would either kill the humans or the humans would take down the nymphs.

Even so, we hope that this article was helpful to you and we hope that you learned something new today. And the next time that you pass by a river or a grove be sure to take a closer look at it because you never know, its defender may be right around the corner after all.

A lifelong fan of mythology and all things ancient, Adrian has always been fascinated by the rich stories and legends of different cultures, and he loves nothing more than diving into a good mythological tale.