Skip to content
Home » Thoth and Hermes: What is the Difference? 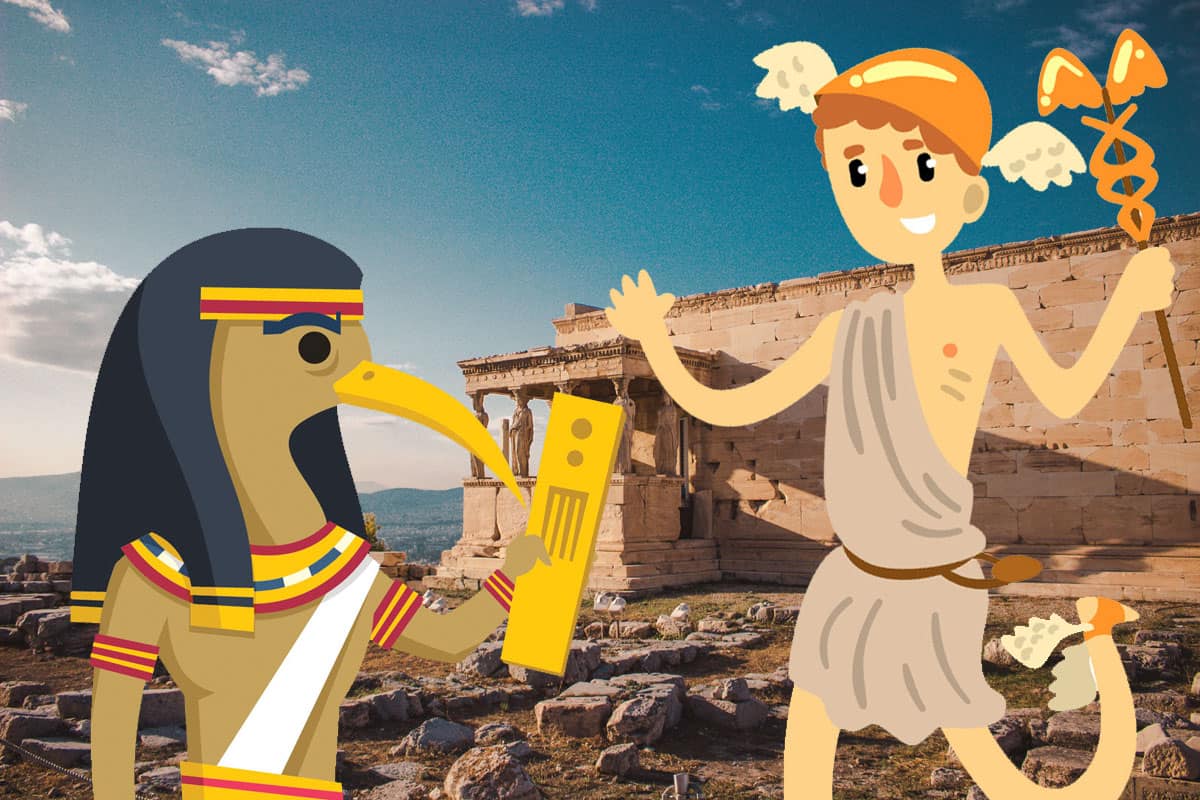 Thoth and Hermes were a scribe and messenger in their respective myths, but both actually were patron gods of many more areas.

While these two are considered equivalent gods, there are quite a few major differences between them. Hermes was a son of Zeus and one of the lesser Olympians, while Thoth was a being unto himself who was separate from the major pantheon. Thoth’s power was acknowledged and feared, while Hermes was often (erroneously) dismissed as only a trickster and messenger. However, their similarities are great. Both aided the other gods in significant tasks that changed the course of the world. Both operated on a sense of justice outside the rule of Ra or Osiris for Thoth and Zeus for Hermes.

What’s the difference between Thoth and Hermes?

Thoth had no parents to speak of, as he was self-begotten. He was a master of the law, mathematics, and language. His wife, Ma’at, was the goddess of cosmic balance, truth, and law, who herself was a daughter of Ra and Hathor. The couple had one child, Seshat, who was the goddess of writing. In some texts, she is his companion or lover instead.

Thoth was a direct Egyptian equivalent of Hermes, and during the Greco-Egyptian occupation, Hermes’s family was attributed to him. His cult center was named Hermopolis by the Greeks, the name by which it is still known.

Hermes was the only favored step-son of Hera. His father was Zeus and his mother was the Pleiad, Maia, whose parents were Atlas and Pleione. As well as his aunts and uncles through Zeus, the other six Pleiades were his aunts through Maia.

In some sources, he is married to Peitho. In others, he is unmarried, but has many lovers. Some of his most significant include Aphrodite, his half-brother Perseus, Myrto, Chione, and Ipthime.

He had many children by his female lovers, whether divine, semi-divine, or mortal. The most famous of Hermes’s children are Hermaphroditus, Pan, Evander, Myrtilus, and Ceryx.

Thoth was originally a moon god who later obtained dominion over knowledge and wisdom. The animals most associated with him were the baboon and the ibis. Depending on the myth, he was either a moon god or the moon itself, and he was often conflated with Khonsu, son of Amun and Mut.

Thoth was a healer and a force for good who helped Horus, Osiris, Isis, and Ra in various battles and tasks. He healed the damaged Eye of Horus, retrieved the Eye of Ra, and brought Isis’s son back to life.

He served as an accompanier to Ra on the Sun God’s journeys into the underworld. He also collected knowledge and scribed spells to share with humanity.

He was also a mediator of the gods. Thoth was often called in to settle disputes between other gods, and was present at several important judgements throughout Egyptian mythology. Like Hermes, he often served in the background, helping other gods rather than acting directly.

The frog goddess Heket had many temples. One story tells of a temple next to the Nile, which flooded every year. She approached Thoth, who fixed it and built a wall to prevent the temple from becoming flooded again because of her goodness.

The goddess Tefnut, daughter of Atum, was known for her fury, and she became very jealous when her grandchildren (Osiris, Isis, Set, and Nephthys) received more worship than she did. She was only willing to return to her life when Thoth granted her a title of honor.

After the death of Osiris, Isis and her infant son fled before Set could find and kill the child. While Horus was hidden, he was stung by a scorpion and died. Isis cried and begged, and Thoth responded to her pleas and helped her revive him from death.

Hermes was an advisor and messenger for Zeus and a psychopomp for Hades. He was the god of travelers, messengers, thieves, tricksters, merchants, and more.

Hermes knew that Zeus’s wife Hera had something of a reputation for not reacting well to Zeus’s illegitimate children. Hence, as a baby, he disguised himself as Ares. Hera breastfed him, thinking he was her son, and after that, she and Hermes were bonded despite his parentage. Hermes would act in this role for others, including rescuing Dionysus from Hera’s wrath and killing Argus to protect Zeus’s lover Io.

Hermes was a friend to humanity, connected to them more closely than all the other Olympians (except maybe Dionysus). Though he allied with the Greeks during the Trojan War, he protected Priam, King of Troy, when Priam went into the Greek camp to retrieve his son’s body.

Appeasing Apollo – As a young child, Hermes stole fifty sacrificial cows from his half-brother. Apollo was furious but could not prove Hermes’s guilt. Apollo got Zeus involved, but Hermes worked out a deal – he had just invented the lute, and he gave it to Apollo in exchange for the charges being dropped. An agreement was made, and the two were friends thereafter.

Disguised as poor travelers, Zeus and Hermes traveled to earth. The people of the land were all wicked and turned them away for the night, except for the old couple Baucis and Philemon. Though they were not wealthy compared to the rest of the village, the couple showed hospitality. In return, when Zeus destroyed their town, Hermes took Baucis and Philemon away to safety.

Hermes, like many gods, aided the hero Odysseus on his travels. He warned Odysseus about Circe’s trickery, delivered the release order to Calypso, and took the souls of Penelope’s suitors to the Underworld.

The roles of these two gods were so similar that the Greco-Egyptians conflated them into one, but Hermes and Thoth had some major differences as well. Thoth’s power was much more on the forefront, and he was prayed to by ostensibly more powerful gods including Isis.

Hermes, meanwhile, was considered lesser than Zeus and many of the Olympians. Despite this, Hermes and Thoth both held overarching power at their fingertips.