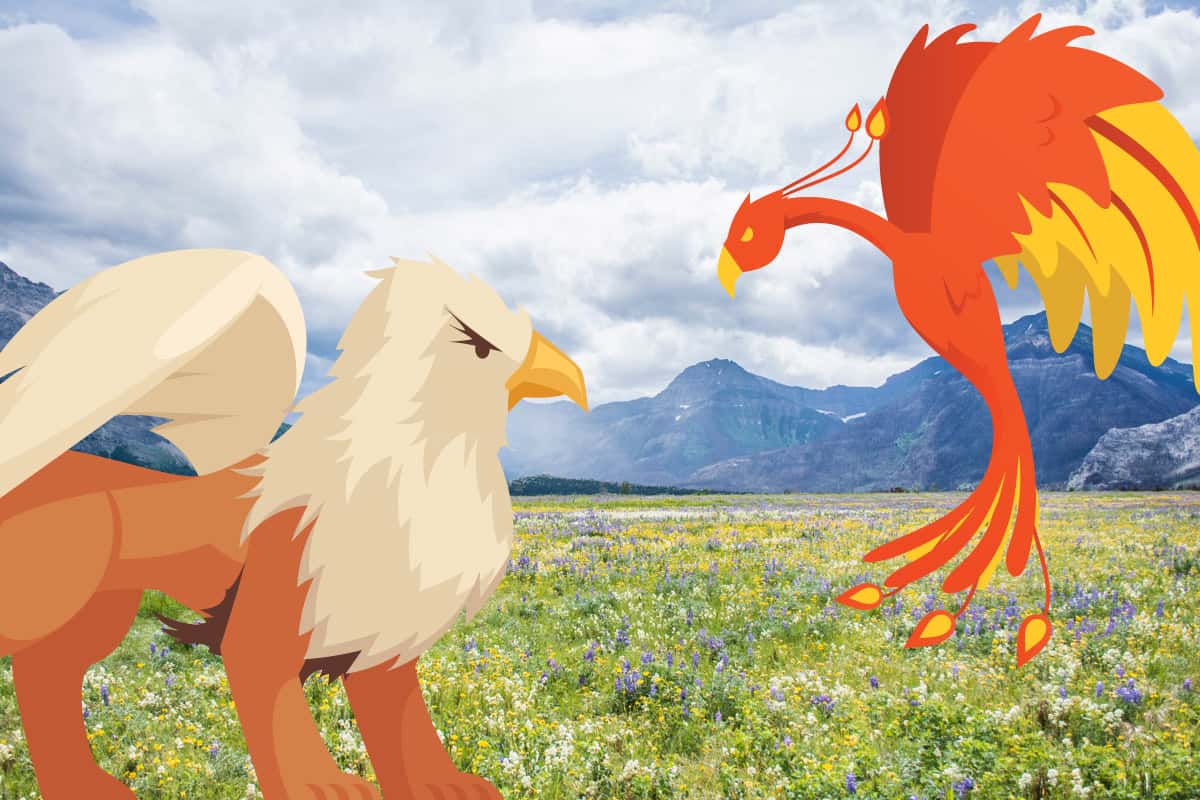 Some classists will follow the trajectory of story and artwork to see how depictions of a specific tale or creature will change. In doing so, they learn much about what a culture valued, understood, and believed in overtime. It becomes equally fascinating when creatures remain relatively unchanged through centuries.

That happens to be the case with the griffin and the phoenix. Despite crossing cultures and still be used in contemporary fantasy, stories and descriptions of the two creatures remain incredibly similar to the earliest known accounts. The notable differences between the two creatures include overall appearance and bodily make-up, general symbolism, and contemporary response. The phoenix tends to be held in a more elevated stature and draws a greater sense of awe than the griffin.

Nonetheless, both creatures maintain a sense of strength, honor, and glory in the folklore and mythology of cultures across Eastern Europe, Asia, and the Middle East.

So, What is the Difference between the Griffin and the Phoenix?

While both the griffin and phoenix are commonly associated with Greek mythology, they claim their origins in the ancient Middle East. The earliest accounts of the griffin can be found in ancient Iranian and Egyptian art. Over the centuries artwork and stories of a bird and lion-like creature became commonly told over most of the documented world. Stories and artwork ranged from the Iranian shirdal to the fifteenth century BCE frescos of Minoan art that contained griffin like creatures to the sixth and fifth century BCE Greek and Roman accounts of the ‘gryph’.

The Greek poet and scholar Herodotus attribute the origin of the phoenix to ancient Egypt. In a fifth-century BCE text, Herodotus writes, ‘…have also another sacred bird called the phoenix which I myself have never seen, except in pictures. Indeed it is a great rarity, even in Egypt, only coming there – according to the accounts of the people of Heliopolis – once in five hundred years, when the old phoenix dies.’ But its earliest appearance in the story of Grecian lore associates the phoenix with their sun god Apollo, just as the Egyptians associated with their sun god, Ra.

Mythologies across traditions note many hybrid creatures. Some hybrids are part human and part animal. In the case of the griffin, it is a hybrid of two different animals. Early depictions of the griffin show a large beast with the head and wings of an eagle but the body of a lion. In some cases, it had the front legs of an eagle and the back legs of a lion.

The phoenix on the other hand is not a hybrid creature. It is entirely its own species and believed to be immortal. The Roman natural historian, Pliny the Elder (~24-79CE), wrote, “We are told that this bird is of the size of an eagle, and has a brilliant golden plumage around the neck, while the rest of the body is of a purple colour; except the tail, which is azure, with long feathers intermingled of a roseate hue; the throat is adorned with a crest, and the head with a tuft of feathers” in his discovered passages.

Unlike satyrs, whose documented appearance changed drastically over the centuries, both the griffin and the phoenix have kept relatively the same appearances even to contemporary ages.

There aren’t many examples of specific griffins in folklore. Some Greek myths suggest that a griffin pulled the chariot of the sun god, Apollo. They were often depicted as strong and proud creatures but there are no notable individuals.

Unlike the griffin, lore suggests that there was only ever one phoenix and it is immortal. It would grow old, burst into flame and burn, and rise again from its own ashes. Islamic mythology has a creature called the ‘anqa’. This creature bears striking resemblance to the phoenix and is often believed to be the same. According to  Zakariya al-Qazwini (1203-1283 CE), a Persian cosmographer, described the anqa as “a wise bird with experience gained throughout many ages and gives admonitions and moral advice.” Other myths of the anqa suggest it started out as divinely pure but become violent and was ultimately killed.

Given their lack of overall stories, it may be that griffins can be seen primarily as symbolic creatures and give way to support various metaphors and morals. In particular, they are viewed in terms of wisdom, power, and strength – particularly in matters of war.

A supposedly immortal being, it makes sense the phoenix became a great symbol of immortality by the ancient Egyptians, the Roman Empire, the Greeks, and more. It is also used by the Christians as a symbol of the resurrection of Christ and the possibility of life after death or the eternal nature of the soul.

The griffin has remained a commonplace creature found in fairytales, myths, and folklore since its origin stories. From John Milton to Dante Alligherei to Lewis Caroll the griffin has been the servant of a specific character, often pulling their chariot.

A griffin pulled Beatrice’s chariot in Dante’s Purgatorio and it was a griffin that the Queen of Hearts ordered to take Alice to speak with the Mock Turtle in Alice’s Adventures in Wonderland. Breaking out of the theme of griffins leading somewhere, they also exist in Harry Potter and the Prisoner of Azkaban as a creature Hagrid taught the students about. It was also used as a plot device to demonstrate the extremes one might have to go through to save a life and the mercilessness of the law. In the Harry Potter universe, griffins kept their overall symbology and were described as proud and strong beasts.

In more contemporary stories, the phoenix can be found notably as a symbol for the rise and fall of civilization in Fahrenheit 451. Ray Bradbury utilizes the phoenix to describe his society’s fall, the bombing in the city, and the life that came anew after the destruction. The phoenix can also be found in The Magician’s Nephew by C.S Lewis as a great bird that protects a garden, that was itself, a symbol of Eden.