Skip to content
Home » Cerberus vs Fenrir: What is the Difference? 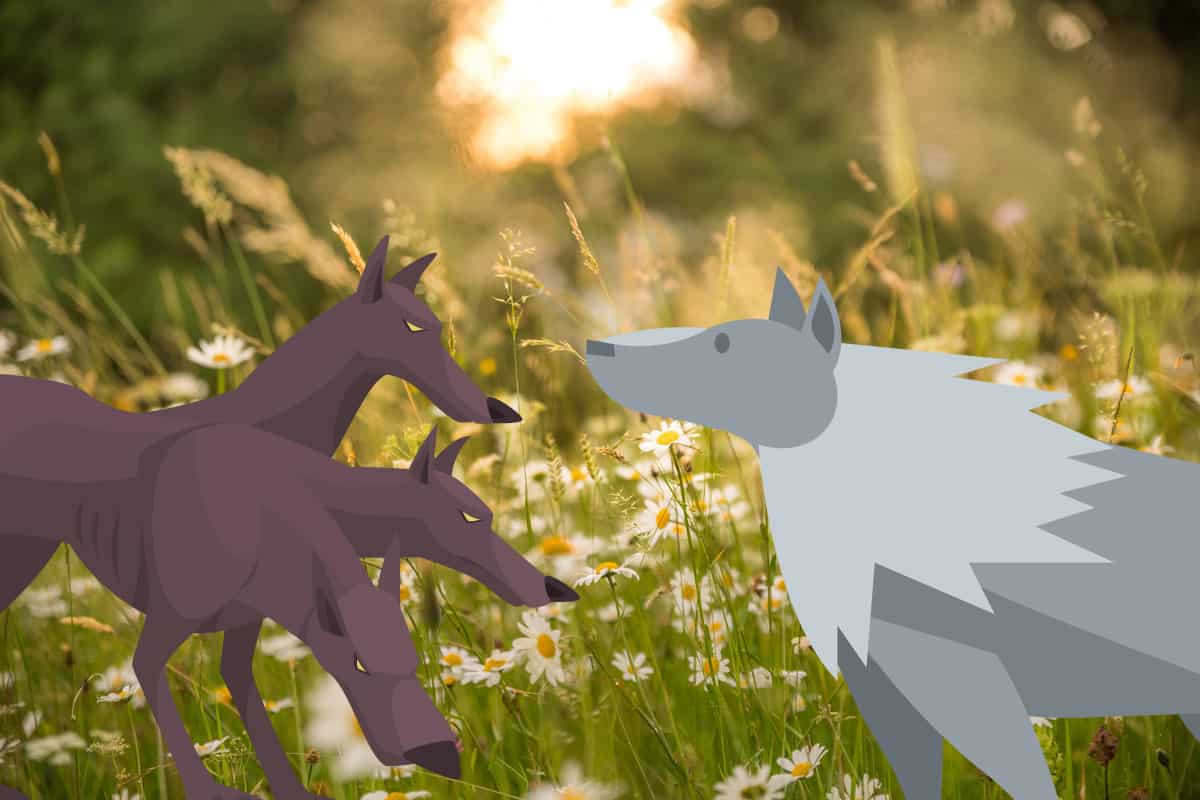 Cerberus and Fenrir’s similarities start and end with the fact that they are two gigantic canines covered in fur. These two mythical creatures could not be more different!

First, Fenrir and Cerberus originate from two distinctly different cultures of mythology. Fenrir is a creature from Norse legends while Cerberus is an invention of Ancient Greeks, later to be adopted by the Ancient Romans. Fenrir is a massive wolf with both god’s and giant’s blood running through his veins. Because of a prophecy that he will bring about destruction, he is ultimately tricked into eternal capture by the other gods. Cerberus, born of two monstrous serpent gods, is the fearsome many-headed guard dog of the Underworld, often referred to as Hades’ Hound.

So how did these two infamous beasts make their way into legend and lore, and just how different are their stories?

What is the Difference Between Cerberus and Fenrir?

Fenrir is a mythological beast from Norse legends. Part giant and part god, Fenrir was born in  Jötunheimr, the land belonging to Giants. Upon his birth, a prophecy foretold that Fenrir would destroy Odin at Ragnarok, the impending collapse of the cosmos, and consume the earth and sky. The gods then moved Fenrir to Asgard, the seat of the Norse Gods, so that they could try to control him. He was raised by Tyr, the god of war and justice.

Cerberus is a creature of Greek mythology and known as the guard dog of the Underworld and Hades’ hound. While born above ground to two monsters, Cerberus was taken by Zeus at birth and given Hades to serve as a watchdog to the Underworld.

Fenrir’s parents are the Norse God Loki, known as the Trickster God, and the Giantess Angerboda. The god Odin is his uncle. Fenrir’s siblings include:

Cerberus traces his parentage back to two of the greatest monsters in Greek mythology, Typohon and Echidna. Typhon, a serpentine giant, and Echidna, a half-woman half-snake, birthed many notorious monsters, and Cerberus’ siblings include:

Cerberus himself fathers no offspring.

Fenrir is a monstrous wolf, so massive in size thanks to his giants’ blood. One legend says that when he opens his jaws, he touches both the earth and the sky – a testament to his impressive size. He is depicted covered in black, shaggy fur with red eyes symbolizing evil and his link to Loki.

Cerberus is described as a gigantic dog with many heads. He is most universally attributed three heads, though a few early Classical writers give him 50 or 100. He is covered in dark fur with a serpents’ tail and snakes appearing from other parts of his body, creating a mane or a writhing mass of fur. The precise snake-like traits vary by author are linked to his parentage as Ceberus’ mother is half-snake and his father has a snake’s head. Ceberus also has dangerous and fearsome claws.

Fenrir possesses immense strength and massive size. He never stops growing, thanks to his giant genes.The wolf-beast is also characterized as intelligent, though his arrogance is ultimately his downfall, as he allows himself to be tricked into restraints as a display of his physical prowess.

Cerberus is fearsome, dangerous, and strong. He is fiercely loyal to Hades and takes his duty of keeping souls from exiting the Underworld seriously, devouring any soul who tries to escape. He is fond of music, as proves to be his downfall when he is lured to sleep by Orpheus’ lyre.

Afraid of Fenrir’s strength and the prophecy, the Gods attempt to restrain Fenrir, tricking him into bondage by saying that it is a mere test of his famed strength. Twice, Fenrir easily broke through the chains. On the third attempt, the Gods used a dwarf-made ribbon known as Gleipnir, made from unknown but supposedly unbreakable material, to bind Fenrir. Now suspicious, Fenrir demanded that one of the gods place their hand in his mouth while he was bound by Gleipnir. Tyr, Fenrir’s caretaker since birth, placed his hand in the wolf’s jaws, and when Fenrir was unable to escape, he bit off Tyr’s hand in rage. Thus, Fenrir lives as a captive somewhere in Asgard.

Cerberus, meanwhile, is known for his appearance in the Twelve Labors of Hercules. As the twelfth and final labor, King Eurystheus tasked Hercules with capturing Cerberus and bringing him to the world of the living. Hades said that Hercules could only take Cerberus if he used nothing but his own brute strength. Legends vary as to how Hercules subdued Cerberus, from strangling and wrestling to using the Nemean Lion’s cloak, but Hercules indeed brought Cerberus before King Eurystheus before safely returning him to the Underworld.

Aside from Hercules, who was a demigod, only a few in mythology are known to have gotten past Cerberus. Cerberus lets Persephone, Hades’ unwilling wife, enter and exit the Underworld with the change of seasons, but she is also a goddess. The only other humans known to have gotten past Cerberus are Orpheus, who lured him to sleep with music, and Aeneas, who drugged him with honey cakes.