Skip to content
Home » Why Did Aphrodite Marry Hephaestus? 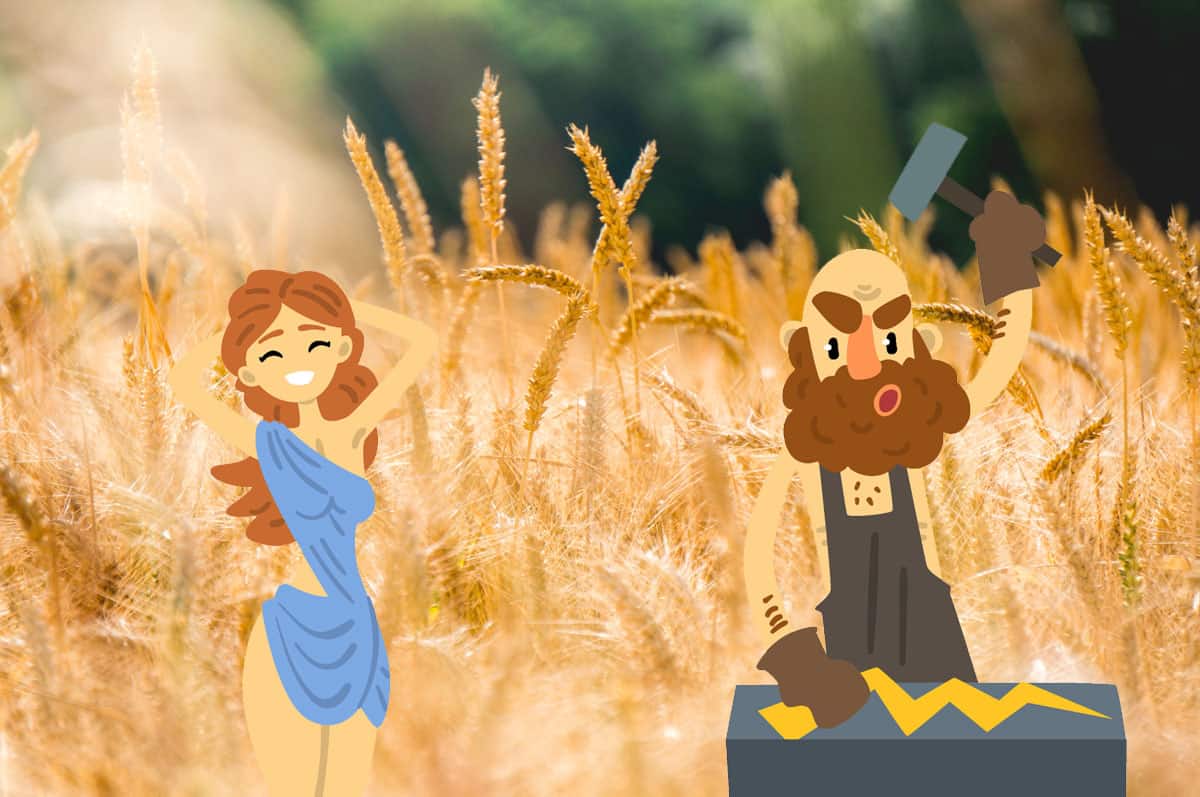 In Greek mythology, many of the myths are dominated by the elder Olympian gods Zeus, Poseidon and Hades and so on. But there are many other myths involving some of the other Olympians. The marriage of Aphrodite and Hephaestus is one of those interesting side stories.

Aphrodite was the beautiful goddess of love, while Hephaestus was the deformed god of the forge. To many, they were not well matched, and this lack of compatibility played out in their marriage. But why did Aphrodite marry Hephaestus?

Aphrodite married Hephaestus, or rather Aphrodite was married to Hephaestus in order to bring peace to her quarrelling suitors. A number of the other Olympian gods including Poseidon, Ares and Hermes all hoped to marry Aphrodite. In the end, to bring peace, Hera decided that Aphrodite would be married to her son Hephaestus. In another version of the myth, Hera is stuck seated in a magic chair. Aphrodite agrees to marry whoever is able to free Hera from the chair. Because Hephaestus originally built the chair, he returns to Mt. Olympus and married Aphrodite.

These two versions of the myth surrounding Aphrodite’s marriage to Hephaestus are both very interesting. Let’s dive into each of them a little further.

Hera Has a Plan to Marry Aphrodite to Hephaestus

The Olympian gods are all in someway related to Zeus. Be they his brother, sister, son or daughter. All except Aphrodite. Aphrodite was born when the promordial sky god Uranus was castrated, killed and overthrown by his son Cronus. The story goes that the severed genitals fell into the ocean and from the foam of the genitals was born Aphrodite. This makes Aphrodite quite unique in the Olympian pantheon of gods.

Aphrodite was a truly natural beauty, with good looks rivalling any of the gods or mortals. When she first arrived on Mt. Olympus she caught the attention of many of the other gods. Poseidon, who was already married, was blown away by her charm and beauty. The sons of Zeus, Ares and Hermes would fight and argue for her attention. Even Zeus, who was married to Hera, was seduced by Aphrodite. The arrival of the threatened to cause great discord amongst the gods as they competed for her hand in marriage.

Hera, being the goddess of the family, couldn’t allow Aphrodite to cause such chaos. She thought for a while and eventually came up with a plan. So far, her other son Hephaestus had been completely overlooked as a potential suitor for Aphrodite. He was crippled at birth and said to be very ugly. To Hera, he was the ideal candidate. Who better to diffuse the chaos, than he who least desired, or at rather least expected to be husband.

Aphrodite Agrees to Marry Hephaestus If He Frees Hera

For this story you have to go back to the birth of Hephaestus. Hephaestus was the son of Zeus and Hera, but when he was born he had a deformed leg.

Hera was so disgusted at her child she flung him from Mt Olympus into the sea. He was found by Thetis, a sea nymph and raised in secret by her in a cave. Not the best of starts for the young god.

Hephaestus grew into a strong young man, and learnt the art of craftsmanship. He could produce many magical and marvellous works and pieces. He made weapons, armour, he even made the first women Pandora.

But, not forgetting how he had been treated by his mother, Hephaestus made a very special gift for her. A beautiful throne. He sent the throne to Hera on Mt. Olympus. She loved the gift, but when she sat down in the throne she found that she then could not get back up. She was stuck in the chair.

She and many of her fellow gods made many attempts to get her out, but they had no luck. They would need to speak to Hephaestus in order to free her. Hephaestus, however, refused to help. At this point, Aphrodite spoke up and said that whoever could get Hephaestus to free Hera from the chair would have her hand in marriage.

Ares, Aphrodites preferred suitor, laid siege to Hephaestus in his volcano forge. But after much effort and fighting he failed to overcome his brother Hephaestus. Next came Hermes, but unlike Ares he was there to fight. In the end he suggested to Hephaestus to return to Mt. Olympus, free Hera and take Aphrodite’s hand in marriage.

This he did, he returned, set Hera free and Aphrodite had to agree to marry him. The two married, but they most certainly did not live happily ever after.

Did Hephaestus and Aphrodite Have a Child?

Hephaestus and Aphrodite had a long and tumultuous marriage and Aphrodite would often cheat on Hephaestus. Unsurprisingly this meant that the couple themselves never did have children together.

They did however have a number of children with other gods and other mortals.

Who Did Aphrodite Cheat on Hephaestus With?

Aphrodite had a number of lovers and affairs while she was married to Hephaestus. Some of the affairs were more significant than others in the events of the Greek myths.

Did Aphrodite Ever Love Hephaestus?

Aphrodite would have many different love affairs. That being said, she did very often return to her husband Hephaestus after having these affairs.

In ancient Greece, an arranged marriage was pretty common. And so, such events were also common place in the Greek myths. Aphrodite really didn’t have much choice in her marriage to Hephaestus. The two were not suited and it was clearly bound to end up in failure.

That being said, Aphrodite wasn’t too bound by her vows of marriage and spent much of her time with other gods and men.

If you enjoyed this summary of the adventures of Aphrodite, we have another article going into more detail about her. If you are interested in the other Greek gods we have a good overview article. And if you just want to learn more about Hermes then we have an article specifically about him.