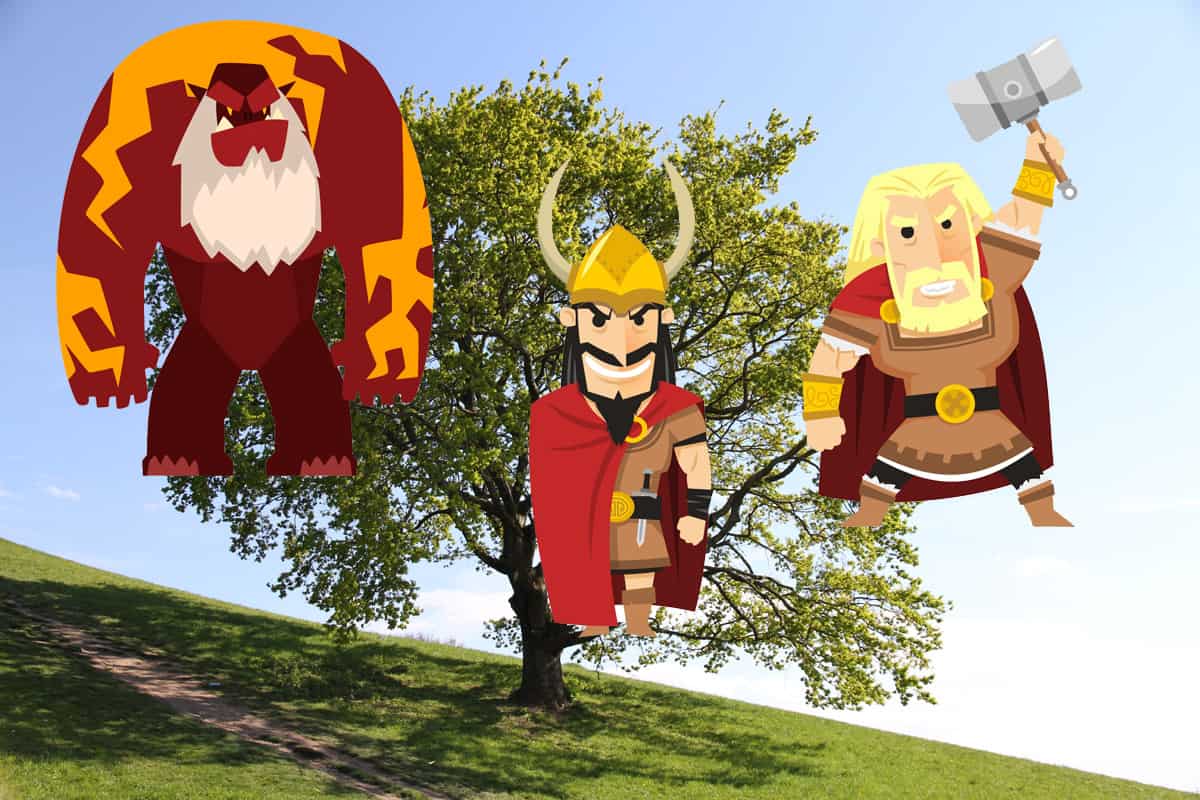 The Norse gods have been the inspiration for many contemporary fantasy and fiction works. From Thor and Loki in the Marvel comics and cinematic universe to their portrayal in American Gods by Neil Gaiman to board games and TV shows based on the end of times – Ragnarök – they’ve inspired creators and audiences alike.

For all their inspiration, keeping track of who is related to whom typically requires a little bit of a study, accepting some contradiction in the various old texts of lore, and of course, a chart or family tree. Hopefully, this helps clear some things up for you!

Who Are the Most Important Gods in the Norse Mythology Family Tree?

Everything seems to start with Ymir. He is the primordial deity of all other deities and various supernatural beings within Norse folklore. As myth will have it, Ymir was born from venom that dripped from a river in a primordial void called Ginnungagap. Having no specific gender or being bi-gender depending on the account, Ymir gave birth to the first created beings from their armpits and legs. These beings included the giants.

Somehow, a cow named Audumla already existed. Ymir lived from her milk and she took salt from the stones for nourishment. In licking the salt from the stone, she shaped it into a man who became Buri, the grandfather of Odin and his brothers. This is important now because Odin and his brothers would go on to kill Ymir and fashion the earth from their various body parts.

It is believed that their eyebrows create the border of Earth or Midgard while their blood became the sea and their skin the earth itself and so on.

Ymir is known as the parent of all the giants in Norse mythology. From the original giants came Fárbauti and Laufey, the parents of Loki, and Aegir and Ran, the parents of nine daughters who somehow all gave birth to Heimdal.

There isn’t much written about Fárbauti and Laufey. In fact, they seem only important insofar as they produced Loki whose antics makeup quite a bit of Norse mythology.

While it’s not clear exactly how it happened, Heimdal is believed to be the son of the nine daughters of Aegir and Ran. The easiest interpretation of this is that since they were personifications of the waves, Heimdal was born from the sea and none of the recovered, albeit fragmented texts, of early lore refer to these nine women as his sister, only his mothers.

Nonetheless, this has brought about quite a bit of debate between scholars and the only thing they can agree on is that Heimdal and the nine daughters of Ran and Aegir are somehow related.

Heimdal was the god tasked with protecting the rainbow road into Asgard. As lore would have it, the sound of Heimdal’s conch would signify to the others that Ragnarök had come. This would lead to an epic battle where he was fated to fight Loki and for them to kill one another.

Of all the Norse gods, Loki has maintained a certain fame for his general mischief and trickery. The lore around Loki has inspired depictions in the Marvel comics and cinematic universe, the long-running CW series Supernatural, and the novel Eight Days of Luke by Diana Jones just to name a few.

Also known as the Trickster, Loki could change his form and sex at will. In some stories, he acts as a support to other gods including Thor and Baldr but generally is seen as an enemy to the gods. He is even attributed to the death of Baldr.

Loki is also the father of Hel, the goddess of death, and Sleipnir, a horse somehow created in his union with a giant. Again, Norse mythology does not abide by logic as far as reproduction goes. Not that the Greeks or Egyptians do either but at least they try to provide some kind of explanation as to the how and why of something.

So now, remember Buri. Buri was created by the cow who nurtured Ymir by licking stone into his shape. Buri had a son named Burr. It’s not clear who his mother is or if he even has one. Burr married Bestla and she gave birth to Odin.

Odin is the main god in Norse mythology. He became the ruler of the other gods. He is often depicted as a god of war but primarily acted as an advisor in battle.

The actual battling was left to Thor. In many ways, the stories of Odin match with the Greek stories of Zeus. Like Zeus, he was the ruler of his pantheon, he was married to the goddess of marriage and fertility, and numerous affairs resulted in many children out of wedlock.

One of Odin’s many affairs included one with a woman named Jord. Their union produced Thor. He is the god of thunder and lightning and is often portrayed as a great warrior and protector. In an unsurprising yet still questionable turn of events, Thor married Sif who was compared to Freya and Frigg for her loveliness.

Sif also happened to have had an affair and a child with Thor’s father, Odin, although it is not clear if that happened before or after she wed Thor.

Many of the stories of Thor highlight his fierce battles, full of blood shed, against various creatures and deities. While he was fierce in his relationship with other supernatural beings, he was said to be soft, kind, and protective of humans. His greatest enemy is the snake Jörmungand who also happens to be one of Loki’s children. Jörmungand is symbolic of evil.

Thor had failed to kill Jörmungand and as such, it believed that good has not yet triumphed over evil. The two are destined to kill each other whenever Ragnarök does come around, possibly symbolizing that one cannot exist without the other.