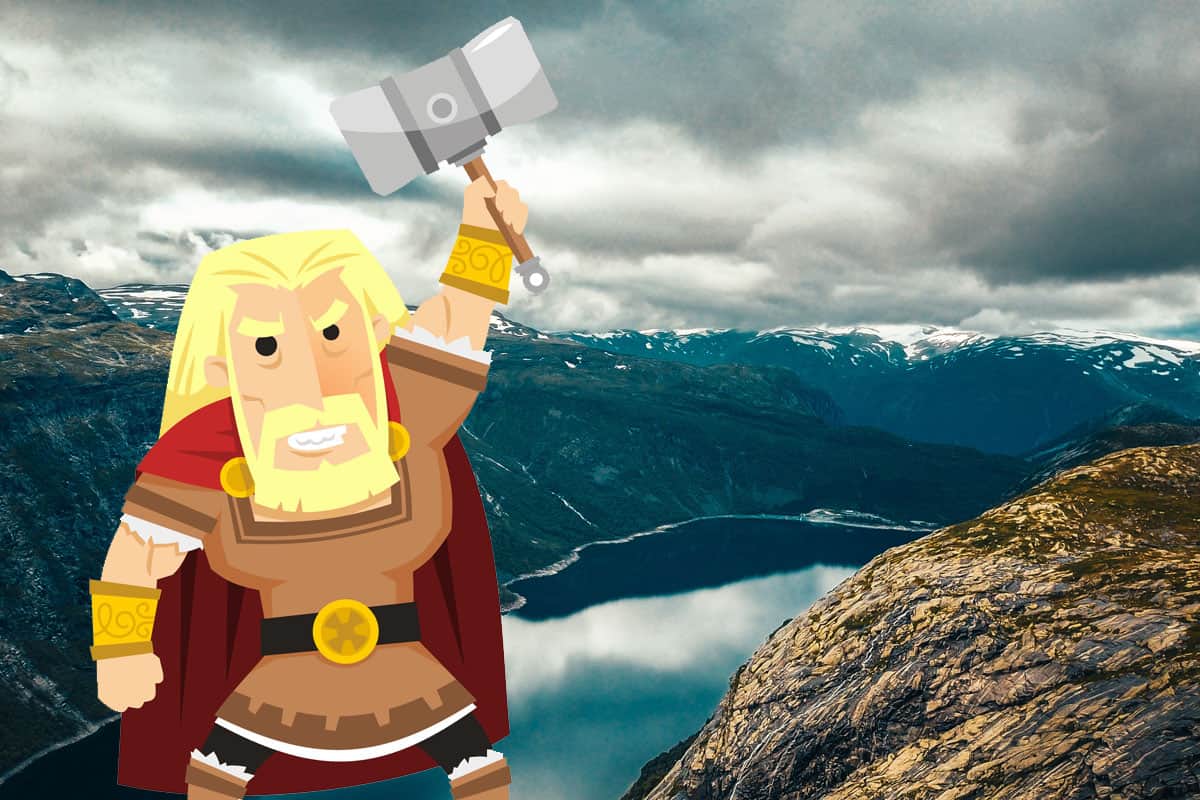 Marvel Comic’s Thor has an archenemy in Loki, the god of mischief, but his actual enemies and rivals in Norse Mythology – outside of comic books! – were quite a bit different. Thor (or, more properly in the old Norse, Þórr) was a son of Odin and a protector of Asgard. While he did have Loki issues, those were considerably less dramatic than his enmities with other gods and creatures!

The following list contains some of the major enemies and rivals of Thor from Norse and Germanic mythology and what had them at odds.

Enemies, Opponents and Rivals of Thor in Norse Mythology

1. Jörmungandr (The Midgard or World Serpent)

Jörmungandr was a giant serpent that encircled Midgard, the world where humans lived. He was one of the three monstrous children of Loki, along with Hel and Fenrir. Jörmungandr was an ouroboros – an unending serpent who circled with his own tail in his mouth. This was very important, as the release of his own tail would trigger the beginning of Ragnarök, the end of the present age of the world.

Most of the Æsir, the primary pantheon of gods, were fated to die at Ragnarök. Thor was no exception. After Jörmungandr released his tail, he would spill poison and death upon the world while his brother Fenrir set the world ablaze. Thor was fated to face Jörmungandr in battle, which rendered him unable to protect and defend the other gods.

Thor would be victorious in his battle with the World Serpent on the fields of Vígríðr, where the final confrontation would take place. He would slay the serpent and walk away. However, after nine steps, the venom of Jörmungandr would become too much for even the strongest of the gods, and Thor would succumb to it, falling where he stood and dying.

Unlike in the popular comic and movie franchise, Loki was not Thor’s brother – adopted or not! – but instead a contemporary of Odin or even older. However, Loki was still a mischief god, and while he was technically one of the Æsir, he found it hard to remain on their good side! They eventually turned against him after his love of chaos made him responsible for the death of Odin and Frigg’s son, Thor’s half-brother Baldr.

While Thor experienced the passive anger of this, there was also an active contention between him and Loki. In one story, Loki had cut off all the beautiful golden hair of Thor’s wife, Sif. Thor’s fury was great, and Loki responded to the threat by going to the master dwarf craftsmen to get a new head of golden hair for Sif in recompense.

To get back on Thor’s good side, Loki then also tricked some other dwarves into creating more treasures for him. One of these was the all-powerful hammer Mjölnir. Thor was the only being powerful enough to handle it, and it could easily crush the skulls of his enemies. Loki presented the hair and the hammer as apology gifts to Sif and Thor and the other treasures to Odin.

Thrymr was the king of the jötnar, the troll-giants who were both friends and enemies to the gods. Thor was well-known for his power over the giants, and so when Thrymr saw an opportunity, he stole the mighty hammer, Mjölnir. Thor only discovered it was missing later, and he approached the other gods for help.

The watcher god Heimdallr and the mischief god Loki agreed to help. First, they contacted Thrymr, who said he would only return the hammer if the Æsir sent him the love goddess Freyja as his bride. Freyja had no wish to marry Thrymr, and so the three gods hatched a plan.
Heimdallr’s idea was for Thor to dress in a bridal gown and pretend to be Freyja. Then, he and a disguised Loki would travel to Jötunheimr and retrieve the hammer. Though Thor didn’t want to, Loki convinced him. Thor managed to hold the ruse through dinner. Then Thrym placed the hammer on what he thought was Freyja’s lap, and Thor saw his opportunity.

Calling on all of his powers of retribution. Thor tore off his disguise and used the hammer to murder Thrymr and the whole wedding party.

Another giant, Hrugnir’s, initial crime was in undertaking a drunken bet with Thor’s father, Odin. Odin bet that his eight-legged horse Sleipnir could outrace any of Hrungnir’s mounts, including the golden-maned Gullfaxi. The two then raced on horseback from Jötunheimr to Ásgard. Odin would win no prize if successful, while his life would be forfeit.

Odin won the race and invited Hrungir inside to feast in the grand palace. The angry giant drank too much and began to boast. He then became abusive, threatening to abduct Freyja to be his wife and to destroy the halls of Valhalla. The gods called upon Thor to duel him, and the giant and the god met in battle.

Thor won the battle very easily. He threw Mjölnir directly at Hrungnir, who did not manage to avoid it. Hrungnir fought with a whetstone, which he threw at the hammer to set it off course. The mighty hammer crushed the whetstone into pieces, which flew everywhere – part of it even became permanently stuck in Thor’s head until the god’s later demise at Ragnarök. However, Thor’s hammer struck Hrungir squarely in the forehead, and the giant died immediately afterward.

Thor really, really liked killing giants, and neither he nor the rest of the Æsir was always particularly moral with their methods. Once, a giant approached the gods and offered to build a palace for them that was strong enough to keep the jötnar away permanently. In exchange, he wanted Freyja as his wife as well as the sun and the moon.

The gods told the builder that he could have all of these things if he ensured that the building was complete by the first day of summer. However, when it looked like the builder was on track to do just that, they balked and cheated. They sent Loki, in the form of a mare, to seduce the builder’s stallion. Without the stallion, the builder could not complete his work on time.

Furious, the builder attacked the gods. They immediately called on Thor, who protected them by “paying the wright’s wage” with his hammer. The builder died, and the gods were left with an almost complete building.

Incidentally, this is also the story of how Sleipnir was conceived; Loki as a mare became pregnant after mating with the builder’s stallion, and after his pregnancy birthed the horse which Odin made his mount.

This giant was the ruler of Geirrödargardar and no friend to the gods. When Loki flew past his realm, Geirröðr captured him and locked him in a chest for three months. He only let Loki free when the mischief god agreed to bring Thor back to Geirrödargardar without his hammer or belt of power so that Geirröðr might kill him.

Loki and Thor returned to the giant’s home, but on the way, they stopped at the house of a friendly female giant, Gríðr. She warned Thor of the plan to kill him and equipped him with several of her own weapons – a belt, an iron glove, and her staff, Grídarvöl.

Thor arrived at Geirröðr’s home, and the giant challenged the god to games. Thor agreed, but as he walked into the game hall, Geirröðr picked up a piece of molten iron from the fire with his tongs and threw it at Thor.

Thor caught the metal with the iron glove and threw the chunk back at Geirröðr. The god tried to hide behind a column, but Thor’s throw penetrated it entirely, killing Geirröðr. So hard was the throw that the iron went through the body, then the wall to outside.

7. All of the Jötnar as a Species

As the above examples already proved, Thor didn’t care much for the jötnar, and in fact, considered the killing of any jötunn as a reasonably fun way to spend time! In multiple sources, it is noted that “going off to the east” with the primary purpose of slaying as many of the creatures as possible was one of Thor’s favorite hobbies.

This is particularly interesting when looking at the heritage of the gods. Many of them were children of jötnar or even married to them. In fact, Thor himself was the son of a giantess. His mother is debated, though she is usually said to be Jörd, a personification of the earth and a giant’s daughter.

Thor was not afraid to accept the help of or even befriend worthy jötnar. However, as a species in general, he displayed a striking and unwavering dislike toward the giants. His willingness and even eagerness when it came to slaughtering him were one of his defining characteristics – even more so because he was the only one of the gods physically strong enough to do so on a regular basis!