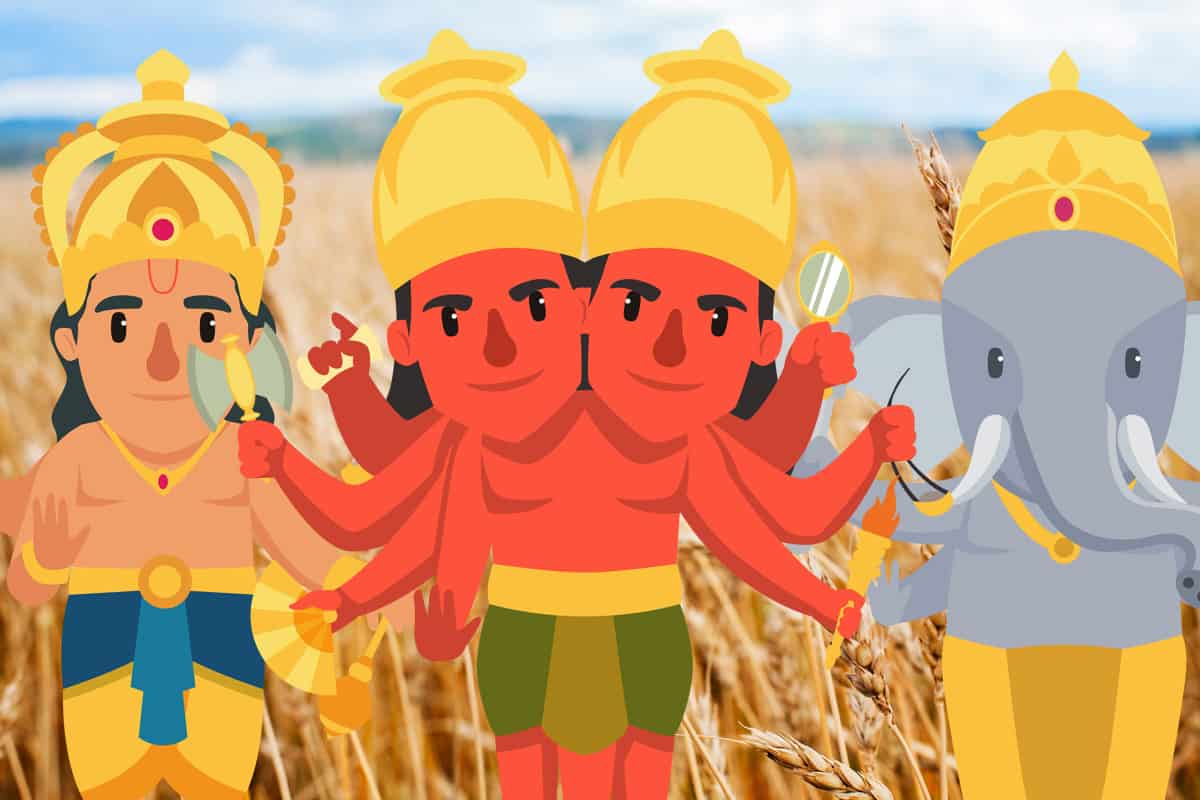 The Hindu Pantheon of gods is widely considered to be the largest one in history. There exist millions of deities within the Hindu Pantheon out of which most of them fall under the reincarnations, versions or endemic adaptations of existing major gods. While some of the major deities like the Trimurti, Devi and deities like Krishna, Hanuman and Ganesha that are worshipped widely, some others are obscure and rarely known despite being very important in Hindu Mythology.

Here are some of the obscure gods in Indian mythology who are seldom discussed in the wider discussion of Hindu mythology.

11 Obscure and Unknown Hindu Gods: Who Are They?

Agni is widely considered as the god of fire in Hindu Mythology. Agni is often revoked as a witness to most occurences in Hindu culture, by burning a holy fire known as a homa or havan, including occasions like marriage, inhabiting a new house, appeasing the gods for prosperity and funerals.

He is invoked along with Indra and Soma, two other gods in the Rig Veda. He is also one of the five element deities that make up the Panchabhoota elements. He is written in the Vedas as existing in three forms – As fire on earth, as lightning in the atmosphere and as the sun in the sky.

Rudra is widely considered to be an incarnation of Lord Shiva in modern interpretations or depictions of Indian Mythology. He is even synonymously compared with Lord Shiva in some cases.

However, historically, Rudra used to be a very popular deity among the tribals and forest dwellers. Rudra is considered to be the god of fury and the hunt, and is a rustic deity with a lot of close associations with the forest and hunting. Rudra is also associated with a class of Indian gods known as Maruts, which loosely translates to ‘Storms’. These gods were known to be representative of storms and tornadoes and Rudra was considered to be the king of Maruts.

Kubera is widely known in Indian Mythology as the god of wealth. However, he is not as popular and is seldom worshipped in temples. He is considered the treasurer of the gods and is said to descend from the family of Lord Brahma. He is  the son of Vishrava and Illavida.

He is the half brother of the King of Lanka, Ravana as Vishrava would go on to have four children – Ravana, Kumbhakarna, Surpanakha, and Vibheeshana. He is usually portrayed as a pink complexioned man with dwarfism and a rather stout body. He is also shown around a lot of jewelry in most of his representations.

Soma is considered the moon god in Hindu Mythology. He is one of the nine planetary bodies known as Navagrahas in Hindu Mythology. Despite being the moon god, Soma is also associated with the night and is also considered the god of plants and vegetation. He is the son of Athri and Anusuya and is a brother of the ascetic sage Durvasa and the deity of Yoga, Dattathreya.

He travels around on a chariot that is ridden by an antelope. He is sometimes also depicted as riding a chariot with three wheels and pulled by 10 white horses. Soma is also known for the legend about Lord Ganesha where Ganesha curses Soma not to be visible on Ganesh Chaturthi after the latter laughs at Ganesha for eating sweets.

Varuna is the god of the oceans and the rivers in Hindu Mythology. He is said to be the son of Sage Kashyapa and Aditi. His mount is the gigantic fish known as Makara and rides on it through the seas whenever he travels. It is said to possess the limbs of an antelope. Varuna is usually depicted as a man with fair skin, has either two or four hands and carries a weapon that resembles a noose.

Varuna once used to be considered the king of the gods in Hindu mythology, but was eventually overthrown by Indra, who fought a monster named as Vrithra who stole all the water from the oceans. Varuna is also considered the god of rain and is worshipped ardently by devotees who are waiting for a late monsoon.

Surya is a widely recognized but not so popular deity in Indian Mythology. He is a personification of the sun, and is therefore considered the Sun god. In the tradition of the Panchayatana Puja, Surya is one of the five major deities that are invoked. Surya is also invoked as a means to realize the essence of the universe, Brahman in the tradition of the Smartas.

Furthermore, Surya is also popular for being the spiritual father of Lord Rama and Karna in the Ramayana and Mahabharatha respectively. Surya is often shown as a man with a bright aura surrounding him and riding a chariot drawn by seven horses, each of which represent the seven colors of the visible spectrum. Surya was once the most popular of the Vedic deities, but his popularity has declined rapidly since the 13th century.

Vishwakarma is originally believed to have been a name given to any deity who is capable of designing and creating something using their powers, but it eventually took a form of its own and began to be associated with a separate deity. Vishwakarma is iconographically associated with both Brahma and Indra, and his depicted appearance closely matches either of them in two different versions.

Kamadeva is the Hindu equivalent of Cupid, and is considered as the god of love and lust. He is widely believed to be the son of Lord Vishnu and Goddess Lakshmi, and is constantly surrounded by beautiful women known as Apsaras. He is married to Rati, the goddess of passion and is very close friends with Vasantha, the god of spring. He carries a bow made of the sugarcane stem and a bowline made of humming bees. He is mostly popular because of the legend that involves Lord Shiva opening his third eye, to burn Kamadeva to ashes. Kamadeva tries to tempt Shiva to marry Parvati while he is in severe penance. Enraged by this, Shiva opens his third eye and burns him to ashes, thereby ending all love and lust in the world. However, he is reborn as the son of Lord Krishna, and everything comes back to normal.

Vayu is the god of the winds as well as the deity associated with breathing. He is one of the five Pancha Bhootha elements. Vayu is also closely associated with the class of storm gods known as Maruts, who are all believed to be born out of Vayu’s belly. Vayu is the spiritual father of Hanuman and Bheema, in the Ramayana and Mahabharatha respectively. It is believed that Vayu undergoes three incarnations to assist Lord Vishnu in his attempt to rid the earth of evil forces. As Hanuman, he helps Lord Rama, as Bhima, he helps Lord Krishna and as Sage Madhvacharya, helps the formation of a Vaishnava sect called Sadh Vaishnava.

Vayu is also popular for the legend involving Hanuman, where young Hanuman attempts to eat the sun, but is stopped when Lord Indra attacks him with the powerful Vajra weapon. Vayu, the spiritual father of Hanuman, takes him into a cave and closes it completely from himself, hiding the whole earth from wind or air.

Kartikeya, also known as Shanmukha and Murugan, is considered the god of war in Hindu Mythology. He is the eldest son of Lord Shiva and Parvati Devi, and is the elder brother of Lord Ganesha. He is known to be a very clever and able warrior with the ability to win any war. He is also worshipped as the god of victory and strategy. He is usually shown as having a single head, but there exist versions of him with six heads. This version is also closely related to the legend that he was born out of an illicit relationship between six wives of some ascetics and the god of fire, Lord Agni.

Kartikeya’s popularity has steadily declined in North India, but he continues to be worshipped in South India.

Yama is known as the god of death, the underworld and Dharma in Hindu Mythology. He is the son of Lord Surya, the sun god and Sanjana, who is the daughter of the famous architect and craftsman deity, Vishwakarma. Yama has a brother called Shraddha Deva Manu, and a sister known as Yami, which some historians claim is another name for the river Yamuna. Yama is believed to be the first mortal to have ever died, which is why is the ruler of the underworld and is assigned with the task of taking people away from the mortal world. Yama’s assistant is another deity associated with death known as Chitragupta.

Being the god of both death and Dharma, Yama not only carries away mortals to the land of the dead, but is also responsible for deciding when one has to die, and is the carrier of justice as well. Yama is also one of the rare Hindu deities who has pervaded into Buddhism and is prominent in China, Japan and other countries where there is Buddhism. Yama is also present in the religion of Sikhism.