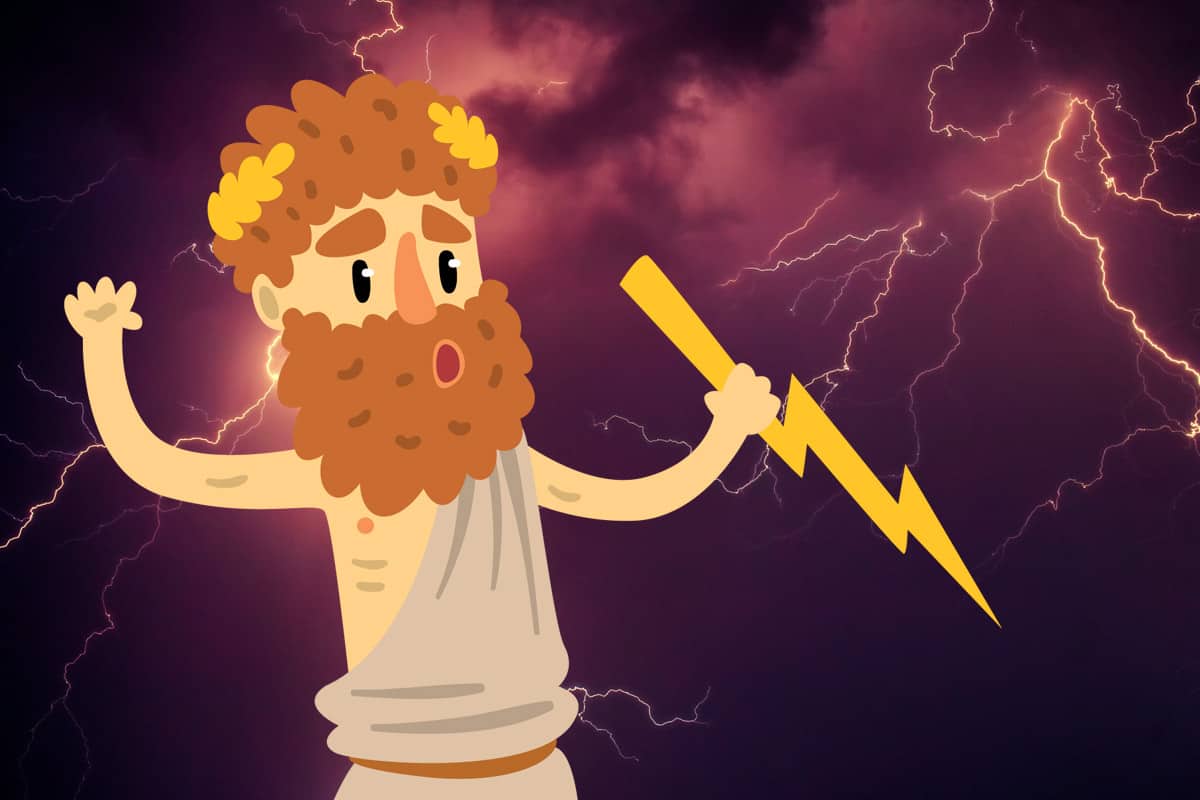 Greek mythology is this funny thing that classists dive into seeking meaning, symbolism, moral, and story. And one would hope that when it came to the king of the gods we’d find symbols relating to loyalty and justice, to strength and compassion for those he rules.

But that desire will always leave us wanting – especially in the realm of Greek mythology. Instead, the symbolism most commonly associated with the king of the gods is frequently related to his non-consensual, extramarital exploits. Go figure.

What are the Symbols of Zeus?

A chiseled, well-built man, long white beard billowing in the beard, with a lightning bolt held above his head, set to throw like a javelin. No doubt that brings to mind an image of Zeus, fierce beyond measure, bringing forth his wrath in the shape of a storm.

It was believed Zeus could call forth and calm storms with his lightning bolt. As lore would have it, his signature weapon was a gift from the Cyclops after he freed them from Tartarus. They gave it to him to support his efforts in overthrowing Cronus.

While he used it to slay many monsters, one such example is the death of Typhon – a giant serpent-like monster. The beast had tried to gain the throne of Olympus from Zeus leading to a nearly apocalyptic battle. Zeus managed to win over the fight by throwing a hundred bolts as Typhon and burying him in Tartarus. And while that may have been a valid use of his weapon, that doesn’t mean he always used it for good.

For example, Asclepius, the god of medicine, was killed by one because Zeus didn’t like the power he had over human life. Asclepius did the unique gift to not only heal people but to raise them from the dead – which is generally frowned upon in most cultures around the world.

This wouldn’t be a list about Zeus if it didn’t include commentary on one of his many extramarital exploits. In this case, it has to do with the abduction of Ganymede. In the Illiad, Homer writes, ‘[Ganymedes] was the loveliest born of the race of mortals, and therefore the gods caught him away to themselves, to be Zeus’ wine-pourer, for the sake of his beauty, so he might be among the immortals.’

Zeus had transformed himself into an eagle in order to abduct Ganymede. Their ongoing relationship became the model Ancient Greeks looked to for pederasty – the romantic relationships between a man and an adolescent boy. Over time, the eagle became a symbol of good omen for victory and strength in leadership.

Following very much in line with the symbol of the eagle, the bull became a symbol of Zeus for one of his other extramarital exploits. Noticing a pattern here? In this case, he transformed himself into a beautiful white bull after becoming enamored with Europa – the mother of King Minos. He sheltered himself into a herd Europa would often look after and eventually won her favoritism. Eventually he coaxed her onto his back and as soon as she was there ran into the sea and swam to Crete.

The mythology isn’t clear if she wanted to be there or was forced given that the Ancient Greeks saw no difference when it came to the autonomy of women. In any case, she did become the first queen of Crete. And the bull came to symbolize fertility and new beginnings.