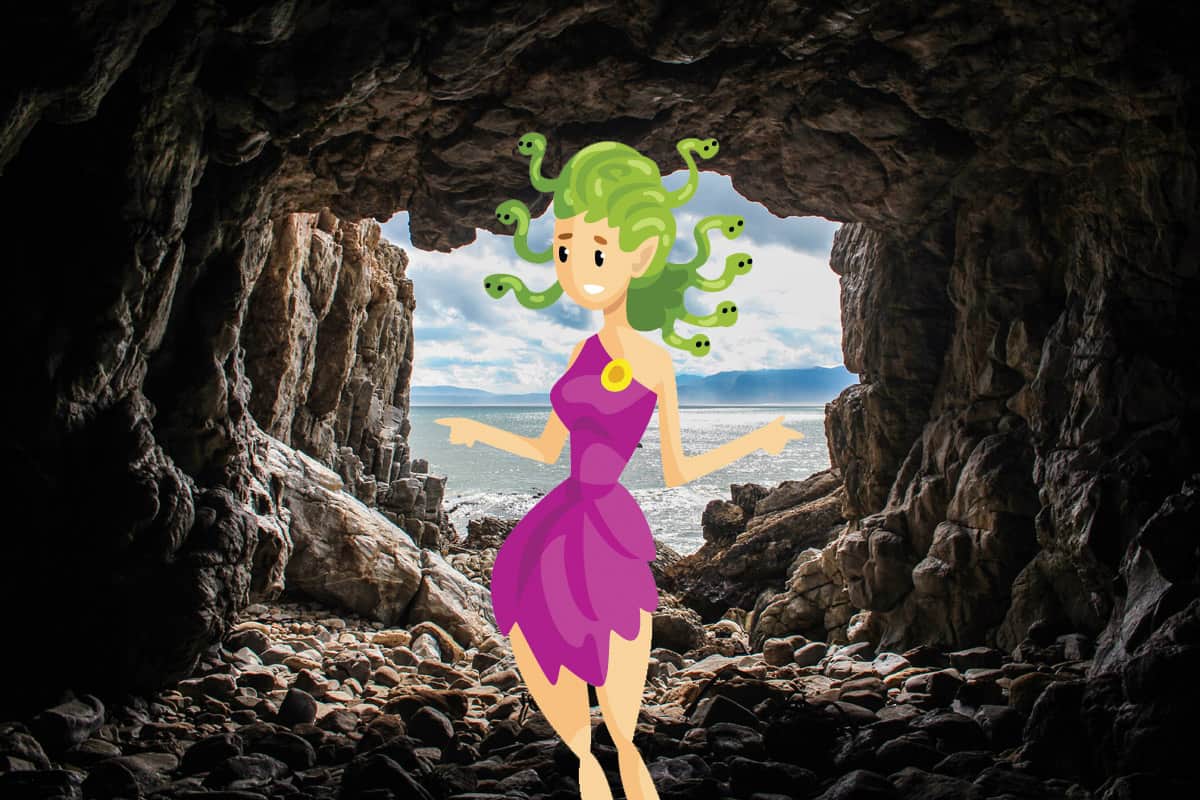 Medusa is the cursed gorgon whose appearance was so horrible that those who gazed upon her were immediately turned into stone, but why was this horrible curse placed upon her?

Although primarily a Greek myth, we owe the story of Medusa’s curse to the Roman author Ovid. Ovid’s Metamorphoses details Medusa’s tragic fate. In this telling, Medusa was a beautiful maiden, known for her glorious hair, who unfortunately caught Poseidon/Neptune’s attention. When Poseidon forced himself upon Medusa in Athena’s temple, the goddess was outraged. The virgin goddess cursed Medusa by turning her once beautiful hair into snakes and transforming her into a monster so gruesome onlookers were turned into stone.

Medusa was transformed and so too was her myth, however one more transformation awaited. Medusa’s curse was not done evolving.

In early myths Medusa was not cursed at all but simply born monstrous. In Greek mythology there were three gorgons Medusa, Stheno, and Euryale all of whom had snakes for hair and the power to turn people into stone.

They were the daughters of the sea god, Phorcys and the goddess of sea monsters, Ceto. Her early story is much different too. Hesiod writes, ”the Gorgons who dwell beyond glorious Ocean in the frontier land towards Night where are the clear-voiced Hesperides, Sthenno, and Euryale, and Medusa who suffered a woeful fate: she was mortal, but the two were undying and grew not old. With her lay the Dark-haired One in a soft meadow amid spring flowers.”

The dark haired one is a reference to Poseidon, who in this myth is her lover. Many of the Greek literary accounts and vase reliefs focus on her death by Perses rather than her origin story.

Medusa was no longer the gorgon of the Greek imagination born both hideous and magical. Her myth had been reinterpreted into a warning story to women who were either too pretty or too flirtatious for Hellenistic sensibilities. Athena had cursed her for the crime of being too approachable.

In Ovid’s eye’s her fate was earned. Other ancient versions of her myth would continue in this vein depicting an overly flirtatious Medusa betraying the stoic goddess Athena by attracting Poseidon’s lust. Some versions added an extra sting to her betrayal by making Medusa a priestess of Athena sworn to on oath of virginity or by making her complicit with Poseidon, a victim only of seduction.

In all versions of her cursing Medusa was the perpetrator somehow responsible for Poseidon’s actions punished by the wise and just Athena.

The cursing of Medusa is an interesting outlier in Greek mythology perhaps belonging with the Abduction of Persephone in that this myth has undergone a contemporary transformation. As the feminist movement started to gain a foothold in mainstream society the story of Medusa was interpreted in a new light.

She became a symbol of feminine rage and strength, a woman wronged pushing back against the forces who wronged her. She starts appearing in feminist literature in the 70s and 80s and than again in the early 2000s. In 2008 Luciano Garbati’s created a sculpture titled “Medusa With the Head of Perseus” which depicted an inversion of the Perses myth meant to impower victims of sexual assault.

The statue later became adopted as a symbol of the Me Too movement. Even Athena’s role in Medusa’s origin myth shifting with context, many viewing what was once a curse as a gift of protection with many modern women asking, is a curse that protects one from the unwanted advancements of men, even a curse at all?