Skip to content
Home » 7 Facts about the Hindu Gods: Creation, Order and Chaos 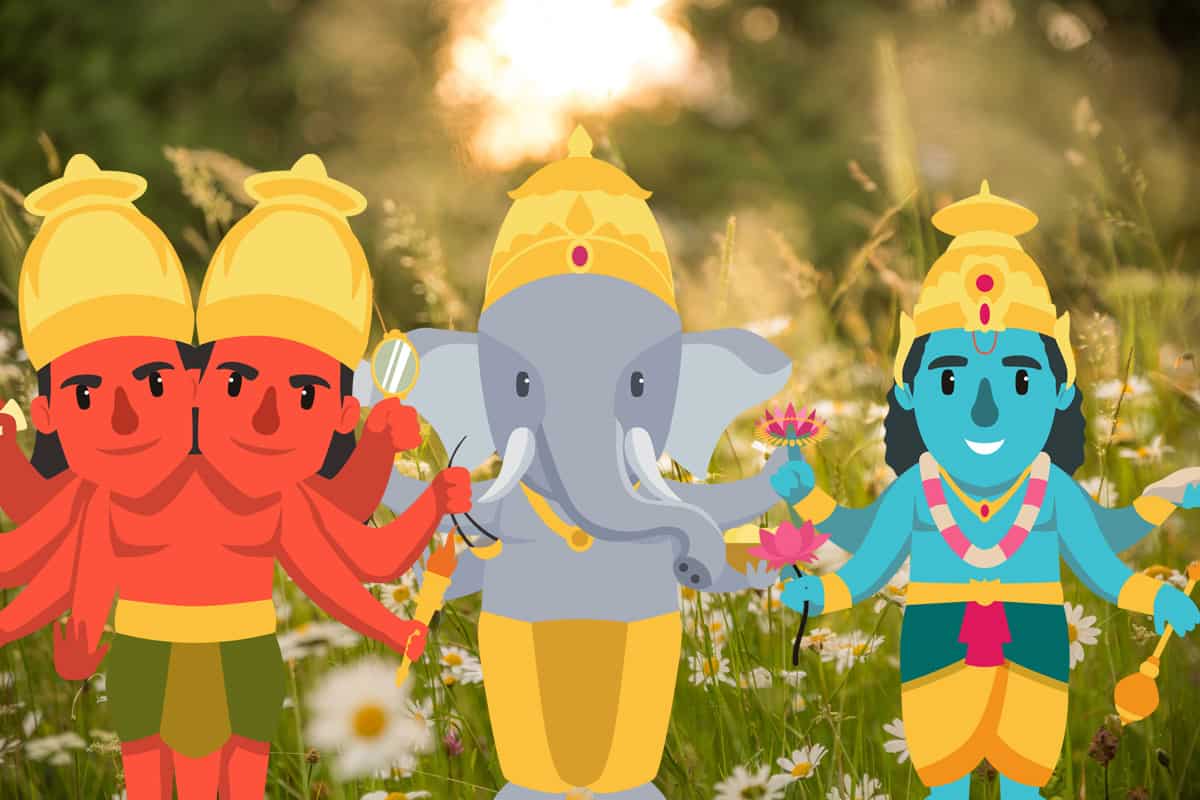 The deities of the Hindu mythology are uniquely exotic to many in the west. The concepts of life, death, and reincarnation are not common to many who are familiar with the western version of these concepts. The deities are fascinating and have their own personalities which differ from many western gods and goddesses.

Hinduism utilizes many aspects of humanity in the creation of their deities. These deities are sometimes portrayed as frightening embodiments of death and chaos. But, they are also portrayed as the embodiment of new life, happiness, and success. The symbology behind these beings holds power to this day, but it is commonly overlooked. The importance of the deities is how they continue to impact all of us to this day.

Many experts and laymen alike make the mistake of boiling down the Hindu deities to simple counterparts of western deities. They may argue, Lakshmi is Venus. Or, Shiva is Hades. But, nothing could be further from the truth. Keep reading and learn who they really are!

7 Facts About the Hindu Gods

In the following 7 points, we will explore the mythology of Hinduism. From the creation of the universe to the formation of humanity from the duality of Brahma. It is a uniquely exotic mythology with destruction and rebirth playing an integral role throughout.

These are the most intriguing facts about the gods of Hinduism. What did they do? Where did they come from? Let’s find out.

1. Creation Started With a Great Explosion

Creation, as many Abrahamic faiths imagine it, does not mean exactly the same thing for Hindu beliefs. According to the Vedas, the religious texts of the Hindu faith, creation begins with destruction.

Creation has three very important aspects that are embodied in different figures. The three figures of creation are Brahma, Vishnu, and Shiva. These three figures are usually known as the Trimurti. This is the Hindu trinity. It is vaguely similar to the concept of the Christian trinity of god in three parts.

Brahma was the creative force that put the world in motion. This is not usually given a personality. Rather, it is a force. Vishnu is portrayed as a male with bluish skin and kind eyes. He is the preserver of life along with his female counterpart, Lakshmi. Last, there is Shiva, the destroyer and bringer of death.

Time is not a linear concept in this mythology. Rather, it is a cyclical concept which begins, ends, and is reborn. There is no first beginning, however, and the gods did not precede the creation of the world as they do in other mythologies.

The destructive powers which propel the end of one world into the formation of another are sometimes called the Vedic Big Bang. The following box displays the unique qualities of the Hindu myths regarding creation alongside other mythologies.

2. The Gods and Goddesses of Order and Chaos

Hindu deities personify certain aspects of behavior and nature in the universe. This includes deities of chaos and order. These deities are split into various personas or avatars that highlight other specifics of their personalities and powers.

The key deities in these categories include the following:

Vishnu: The personification of order and Creation. This deity is a part of the Universal trinity known as the Trimurti.

Lakshmi: Lakshmi is the female persona of Vishnu and his wife. Her energy is that of wealth, abundance, and creation.

Shiva: Shiva is the third part of the Trimurti. He is the personification of chaos and destruction and is an integral part of re-creation.

Kali: Kali is the female embodiment of destruction as well. But, she is also known as the “consumer” since she devours that which is destroyed.

Let’s explore these gods and goddesses in more detail:

3. Vishnu and Lakshmi Were Together In All Times

Vishnu and Lakshmi were consorts in Hindu mythology across time and in different manifestations. The different names associated with this god and goddess are actually different forms of their being.

The best way to understand this idea is to understand that the universe has been destroyed and recreated many times. This has meant the spirit of Lakshmi and Vishnu has manifested differently in these different ages.

Vishnu’s most popular manifestations are Rama and Krishna. These represent different aspects of his being as were needed in the world at the time. Lakshmi was the constant consort of Vishnu in all forms. For Krishna she was Rukmini and with Rama she was Sita.

These deities were said to have met before the gods and goddesses were immortal and overthrew the demons. They existed in the blissful, life-giving sea of milk.

4. Symbols of Lakshmi and Vishnu

Lakshmi was the embodiment of wealth which made her the perfect female counterpart of Vishnu who preserved life. She is said to have arisen from the ocean of milk in a lotus at the bequest of Vishnu to churn the seas.

Because of these facts, she is often depicted within the protective guard of the lotus. Her other symbols are the conch shell, the disc (Chakra), and the lotus. She is maternal and creative in nature and the embodiment of motherhood. Each of these symbols she shares with her husband.

The Lotus symbolizes their birth and prosperity. It also symbolizes the creative, preserving force of these deities. The disc represents the Chakras which are the energy centers of life. Last, the conch shell is the symbol associated with the “Om” symbol and sound. This sound was thought to be part of the creation of the universe and the sound that brought balance to the world.

5. Shiva and Kali Were Good Deities Despite Their Powers

Both Shiva and Kali are considered an embodiment of destruction and the need for destruction to occur before rebirth. Vishnu and Lakshmi were the deities who tried to preserve balance and tried to keep humanity from veering off course and becoming consumed with bad deeds.

But, sometimes the universe becomes overwhelmed by corruption and evil. At these times, it was necessary for the deities of destruction and consumption to bring about the end of one age and the new to come.

Both of these deities are also associated with the creative powers of the universe and death. This may sound very contradictory to those in the west who associate death as a negative force. But, in Hindu mythology, it was viewed as one of the most important factors of life.

The old needed to be removed in order for the new to be made manifest. This means both of them hold important places in the creation of the world. But, Shiva is a part of the Trimurti of creation. Shiva is death while Brahma is the creator and Vishnu is the preserver of life.

Kali, however, is the maternal force that pervades all being. She is the destroyer of ego and the one who brings enlightenment. Shiva is similar. He is portrayed as the ascetic man clothed only in rags and with wild hair. This was intended to embody a sort of yogi who was intended to portray Shiva as removed from worldly things.

Both Kali and Shiva are channeled by adherents to remove illusions. This is because both are removed from the desires which corrupt the minds of people and society.

Kali was always shown naked with the heads of men tied about her waist. The nakedness of the woman was not intended to be sexual, but rather to imply her disconnect from the desires of people and power over the masculine.

6. Symbols Associated with Shiva and Kali

Shiva is said to ride the bull (Nandi) that was also the guardian force of his abode. His weapons were the trident (Trishula) and he was usually armed with a bow or ax as well. The Trishula was a tool used to separate mankind from their physical abodes. This tool could sever the body and spirit.

Kali is often depicted as the embodiment of Mother Nature. She has a third eye displayed on her forehead that symbolizes the enlightenment of the mind. Below this symbol is the moon and the sun. This means she is the embodiment of every aspect of nature. Not just the feminine but also the masculine.

But, most importantly, these deities represent how important death is to life.

7. The Sacred Texts of the Gods.

The deeds of the gods and goddesses are recorded in various sacred texts throughout the ages. These texts probably began as oral traditions held as sacred from the various tribes of India. It is believed that the different names of the deities were originally tribal deities that were later combined into singular deities when the culture came together.

The Vedas: The most commonly known and are considered the source of all wisdom. They are separated into the Rig Veda, Atharva Veda, and the Sama Vedas.

Mahabharata: The epic poem of the land that tells the epic journeys of the gods and goddesses.

Aranyakas: The wilderness texts which discuss the importance of ritual sacrifice. They are usually included in the Vedic texts today, but some experts believe they pre-date these writings.

There are many more sacred texts to the Hindu religion, including texts associated with the off-shoots of Hinduism. Buddhism and Jainism are religious “descendants” of Hinduism and have the Upanishads and other sacred writings sometimes used by the Hindu faith as well.

But, the above list is considered the basic texts of the religion.