Skip to content
Home » 10 Most Important Hindu Gods and Goddesses: Who Are They? 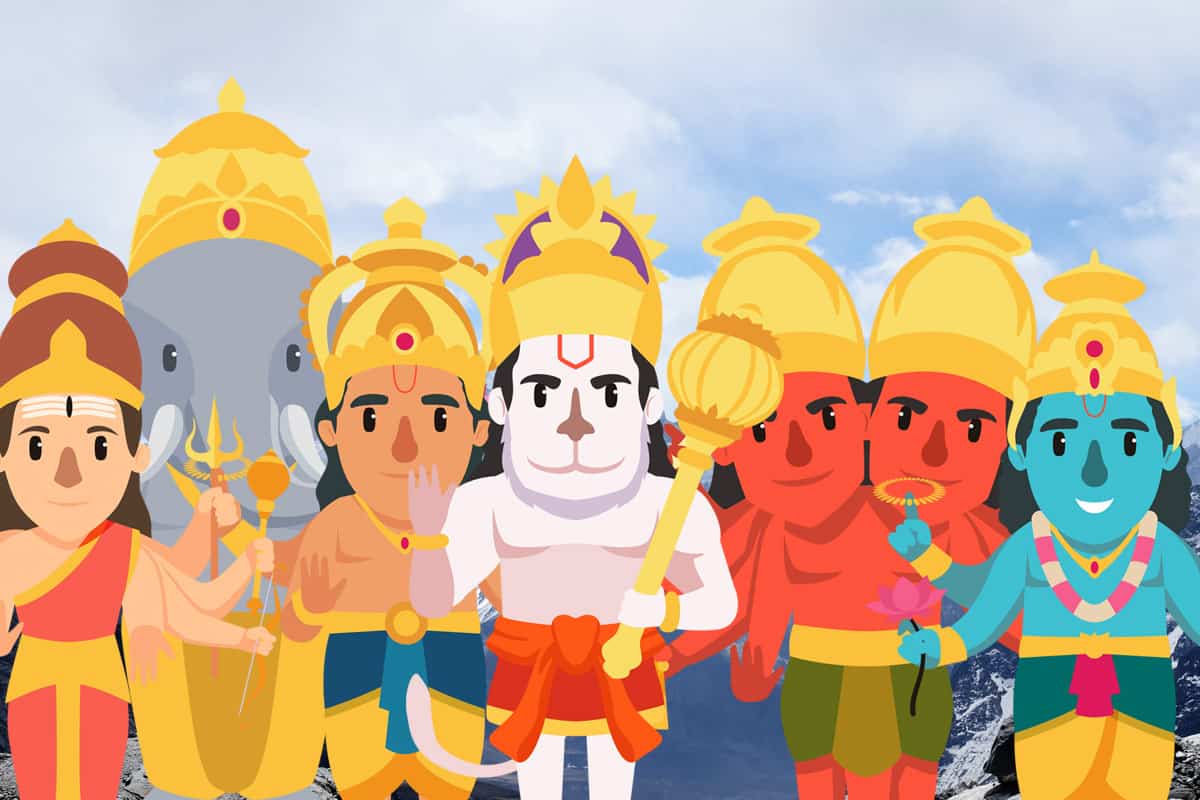 The Hindu pantheon of gods is vast and is considered to be one of the largest pantheons in the world. Some estimates put the total number of deities in the Hindu pantheon to be about 330 million. However, it is the major few deities of the pantheon that usually feature in the entirety of Hindu Mythology.

Here are some of the major Hindu gods that have been revered over the ages and have been a major part of Hindu mythology across all Hindu cultures.

The Most Important Gods and Goddesses in Hindu Mythology

Lord Ganesha, or Ganapati is a deity in the Hindu pantheon with the head of an elephant and the body of a human being. In the Hindu tradition, the name of Ganesha is evoked before starting any event or at auspicious occasions. It is believed to bring good luck and ensure the smooth running of ceremonies. He is also called Vighna Vinashak which translates to remover of obstacles.

Ganesha is the son of Parvati Devi and Shiva. According to popular legend, when Shiva came to meet Parvati, Ganesha, unaware of Shiva’s identity, tried to stop him. This led to a fight, and Shiva cut off his head. Eventually, realizing his mistake, Shiva facilitates the rejuvenation of Ganesha by attaching an elephant’s head to his body.

Ganesha is revered widely in most Hindu cultures, and in the Ganapatya tradition, Ganesha is considered the supreme deity. His birthday, known as Ganesh Chathurthi is one of the most pompously celebrated festivals in India.

Brahma is one of the major deities in the Hindu Pantheon and is known for being one of three major deities in the ‘Trimurti’ alongside Vishnu and Shiva. In the ‘Trimurti,’ Brahma is considered to be the creator and is linked with the all pervading essence of the universe called ‘Brahman’. It is believed that Brahma wills reality into existence by shaping the Brahman by the way of his design.

Saraswati Devi is considered to be Brahma’s wife and she is said to contain the energy of creation, using which Brahma creates reality. She is attributed with knowledge and is therefore revered in most Hindu cultures as the goddess of knowledge.

Brahma is portrayed in two forms – Nirguna and Saguna. The Nirguna version of Brahma implies that he has no form, and just like the Brahman, is an all pervading existence with no concrete form. However, in the Saguna form, Brahma is portrayed as having four heads, and as an old man with a long beard and hair seated on a lotus flower.

Vishnu is one of the most popular deities in Hindu Mythology. He is also known as Sathyanarayana or Sri Hari in some traditions. He is considered one of the ‘Trimurti’ besides Shiva and Brahma and fulfills the role of a protector of all reality. His consort is Goddess Lakshmi, who is widely revered as the goddess of wealth and prosperity.

He is especially popular because besides being in his original form, he is also known for taking several reincarnations known as ‘Avatars’ to rid the world of ‘evil’ forces. Some of his most revered avatars are of human form. Referred to as the Dashavatar, which translates to ten reincarnations, the most popular of them are perhaps Lord Krishna and Lord Rama. Others include Lord Parashurama, Narasimha (Man-Lion), Vamana (Dwarf), Matsya (Fish), Koorma (Turtle), Varaha (Boar). Finally, Gautama Buddha is widely believed to be the ninth avatar in Hindu Mythology and Kalki, the tenth avatar. Kalki is the only avatar of Vishnu that is expected to appear on earth in the future as a vanquisher of ‘evil’ forces.

Shiva is probably the most popular deity in all of Hindu Mythology. He is known as the destroyer of all evil and chaos in the universe and is one of the three deities in the ‘Trimurti’. Shiva is revered across almost every Hindu culture, and according to the Shaivism tradition of Hinduism, Shiva is the supreme deity of all Hinduism. Shiva has been portrayed in several different forms across various cultures. Some of his popular portrayals include the Adiyogi form where he is a very well versed yogi, indulging in the practice of the ancient form of yoga. Another portrayal of Shiva is that of Nataraja, or a dancer, which is widely considered as a means for his devotees to find solace.

Shiva is usually portrayed as a well built man wearing tiger skin. He is sometimes shown as having blue skin, but is always shown to have a dark blue neck, which is why he is called ‘Nilakanta’. He has a trident called the ‘Thrishoola’ in his hands, the moon and the river Ganga flowing out of his head.

Shiva is married to Parvati Devi, his consort and they stay together in Mount Kailash along with their two children Lord Karthikeya and Lord Ganesha. They are regularly visited by and surrounded with other gods, and sometimes their devotees.

The core identity of Mahadevi is disputed by many different traditions. Primarily, it is agreed upon that Mahadevi is the primordial goddess who brought the universe into being and is said to possess everything that exists. She is the provider of all riches, knowledge, power and abilities to every being, and according to some traditions, also believed to be responsible for creating the ‘Trimurti’.

Indra is considered the leader of all gods that reside in the ‘Devaloka’, an abode for the Devas (Gods). He is married to Sachi Devi, and is considered very powerful. He bears a mythological resemblance to several gods from other pantheons including Zeus, Thor and Perun. He is considered the god of thunder and lightning, and was a child of both the earth and the sky. He was given a very powerful weapon called the ‘Vajra’ which resembles a perpetual thunderbolt by a colony of sages whom he asked for help to defeat a demon. Legend has it that the weapon was made from the bones of the oldest sage in that colony named Daidichi.

Indra is also known for being a notorious god in that, there exist stories in which he dupes and cheats people sometimes. One such anecdote is that of Indra duping Sage Gauthama’s wife Ahalya into believing he is her husband through disguise and having sexual relations with her.

Agni is the god of fire in Hindu Mythology and is one of the gods who resides in the ‘Devaloka’ alongside Indra, Varuna, Vayu and many others. He is of major importance in Hindu Mythology also because he is invoked symbolically at the beginning of almost every Hindu ritual in the form of a holy fire called ‘Homa’ or ‘Havan’. This role of Agni is even more obvious during marriage ceremonies in Hindu families where he is metaphorically considered the prime witness to the rite of passage, and the ‘Sapthapadi’ or the tradition of seven rounds as a married couple usually happen around a holy fire, which represents Agni.

Hanuman is the most popular monkey god in Hindu mythology who was very notorious in his childhood and was almost killed by Indra when he tried to eat the Sun. However, he was eventually humbled as he grew up and is best known for being the most humble devotee of Lord Rama in the Ramayana. Furthermore, there are several legends about Hanuman that depict his feats of physical strength. He is also considered to be immortal and is a bachelor for life, never ever marrying anyone.

Hanuman is one of the most popular and revered deities in Hindu tradition, especially by the younger generations. The iconography surrounding Hanuman as an extremely strong and physically built deity is immense. There exist plenty of gymnasiums, traditional martial art centers and strength building traditional places in countries like India where lord Hanuman is prayed to before beginning to train.

Surya is the sun god in Hindu mythology, also known as Adithya. He is usually portrayed as a very bright being traveling in a bright golden chariot pulled by seven horses. It is believed that the seven horses represent the seven different colors in the visible spectrum. Some other traditions consider the seven horses to stand for the seven days of the month.

Surya has been a very revered deity in Hinduism since ancient times and there exists archeological proof to understand the influence of Surya as one of the most popular gods since the beginning of Hindu tradition. However, the popularity of Surya as a god has vastly declined over time probably due to the emergence of other more anthropomorphic gods that form a major part of Hindu mythology and its religious scriptures like the Bhagavad Gita, Vedas and Upanishads.

Saraswati is the goddess of knowledge, learning, wisdom, music and art. She is widely considered to be the goddess who is the muse and consort of Lord Brahma and is therefore the one who contains all knowledge pertaining to the universe. She is invoked into Hindu prayer by anyone who wants to gain knowledge and wisdom. Her first mention in Hindu Mythology is recorded to be in the earliest Veda, the Rig Veda.

She is portrayed as a very calm and serene being who is usually seated. She has four arms, in each of which she carries a book, a rosary, a water ot and the popular musical instrument called the Veena. She has had a lot of popularity since the vedic times and has maintained the reputation as an important goddess in Hindu tradition.