Skip to content
Home » Brahma vs Shiva: What is the Difference? 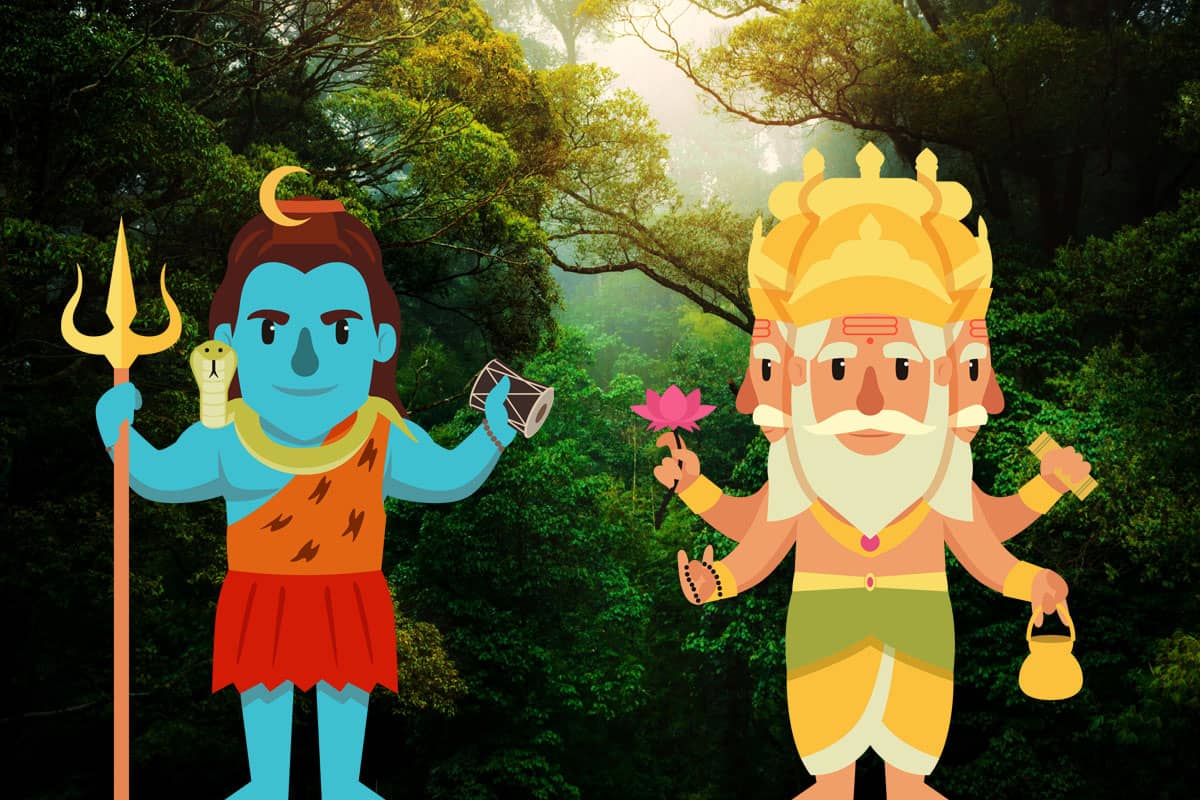 Belonging to the Hindu pantheon, Brahma and Shiva have a multitude of stories and accounts told throughout the millennium. For followers of Hinduism or Sanatana-dharma, the weight of these accounts depends heavily on their specific sect and tradition. But while there are some sects of people who hold Shiva as the highest deity, there are no sects that hold Brahma as the highest. In fact, he is rarely worshipped at all. Still, his stories remain prevalent and present as they hold many lessons to learn and document the Hindu creation stories.

The beauty of religious texts, in general, is that there is always a moral or lesson to learn from. The same remains true of the stories of Brahma and Shiva. Both deities provide lessons on spirituality, life, and how to live it.

So, What is the Difference Between Brahma and Shiva?

Shiva has a couple of different potential origin stories. One account suggests he is swayambhu or self-manifesting. This account is often supported by Shaivites who believe him to be the source of all and the highest deity. Other accounts suggest he was created as a consequence of an argument between Brahma and Vishnu. This account is more commonly accepted by Vaishnavas and Shaktas.

Brahma is often shown with four heads. Many believe that each head is symbolic of one of the four Vedas – Yajur Veda, Atharva Veda, Sama Veda, and Rig Veda. Some accounts suggest he originally had five heads but later had one cut off by Shiva as punishment for lustful and incestuous behavior. Brahma also has four arms and in each hand holds an object that either symbolises creation or knowledge. He holds a string of one hundred and eight beads used for prayers called a mala in one hand, a water pot in another, the Vedas in the third hand, and a lotus in his fourth hand.

Shiva is often depicted sitting atop Mount Kailash in constant meditation. His hair is matted and piled high on his head, snakes sit around his neck, a third eye in the middle of his forehead, a trishul in hand. Sometimes he is shown with four hands and is dancing. This form is called Shiva Nataraja and is said to represent the cycle of birth, life, and death. He is also often shown with a blue throat from when he drank the poison produced by the churning of the Milky Ocean. He was given the name Nilakantha as a result of that. Nonetheless, Shiva is easily identified because he always has several snakes around his shoulders or even in his hair.

One of the most famous stories of Brahma comes from the Srimad Bhagavatam. In this story, Brahma looked down at the land of Vrindavan where Sriman Narayana had incarnated as Krishna. He wondered if Krishna remembered who he was and decided to play a trick or prank. So one day, while everyone was napping on the banks of the Yamuna, Brahma stole the cows and the gopas (young cowherd boys) Krishna had been playing with. He placed them in a cave and decided to return later to see how Krishna would respond. Krishna, being all-knowing, decided to play into the prank and created a replica from himself of each cow and gopa Brahma had stolen and continued with his day. A while later, when Brahma went to see Krishna’s reaction and found everything continuing more or less as normal. The primary difference was that the mothers of the cows and gopas seemed to be extra devoted and overwhelmed with love for their children. Brahma realised Krishna knew exactly who he was and what he was doing and returned those he had stolen. He bowed, humbling himself to Krishna, and began to praise him. These praises became a part of the Brahma Samhita, a prayer commonly sung by Vaishnavas.

The story of Gopishwar is often celebrated during one of the main pujas on Shivaratri, a high holiday in the worship of Shiva. Gopishwar is the name given to Shiva after he attempted to enter the Maha Ras, a dance between Krishna and the women of Vrindavan. According to this story, Shiva was banned from entering because he wasn’t a woman. So he turned away, dressed as a woman, and tried to enter again. Eventually, Krishna allowed him in and they danced together.

Brahma symbolises the potential and willpower of creation and Vedic knowledge. While he is rarely worshipped in the Hindu faith, he remains an important part of various creation stories and other myths within the tradition.

Shiva symbolises destruction but not necessarily death. In the Hindu tradition, death would be symbolised by Yamaraj. The destruction Shiva represents is of the darkness or demons within. Sitting in meditation, with his third eye open, Shiva demonstrates the perfect yogi who has conquered all obstacles and developed true and complete self-realization. Furthermore, the trishul in his hand represents the three states of consciousness – waking, dreaming, and sleeping. In images in which Shiva is seen riding a bull or standing a next to bull, he can be seen as an embodiment of dharma or righteousness as well.

Brahma can still be found in temples all over India although he is rarely if ever, worshipped. According to one myth, Brahma had demonstrated incestuous behavior towards his created daughter. As punishment, Shiva cut off one head and cursed him to never be worshipped. Another myth says the curse was a punishment for trying to cheat Vishnu in a game. Either way, Brahma has little contemporary influence or appearance.

Unlike Brahma, Shiva holds quite a bit of popularity in contemporary culture. Shiva is a key figure in the Shiva Trilogy by Amish Tripathi which sold over a million copies. The trilogy drew both from the author’s own creative integrity and a variety of Hindu myths and legends. The EDM scene and the contemporary yoga movement have both drawn influence from Shiva as well. It’s not uncommon to find him in artwork and music in both scenes.