Skip to content
Home » Gnomes vs Trolls: What is the Difference? 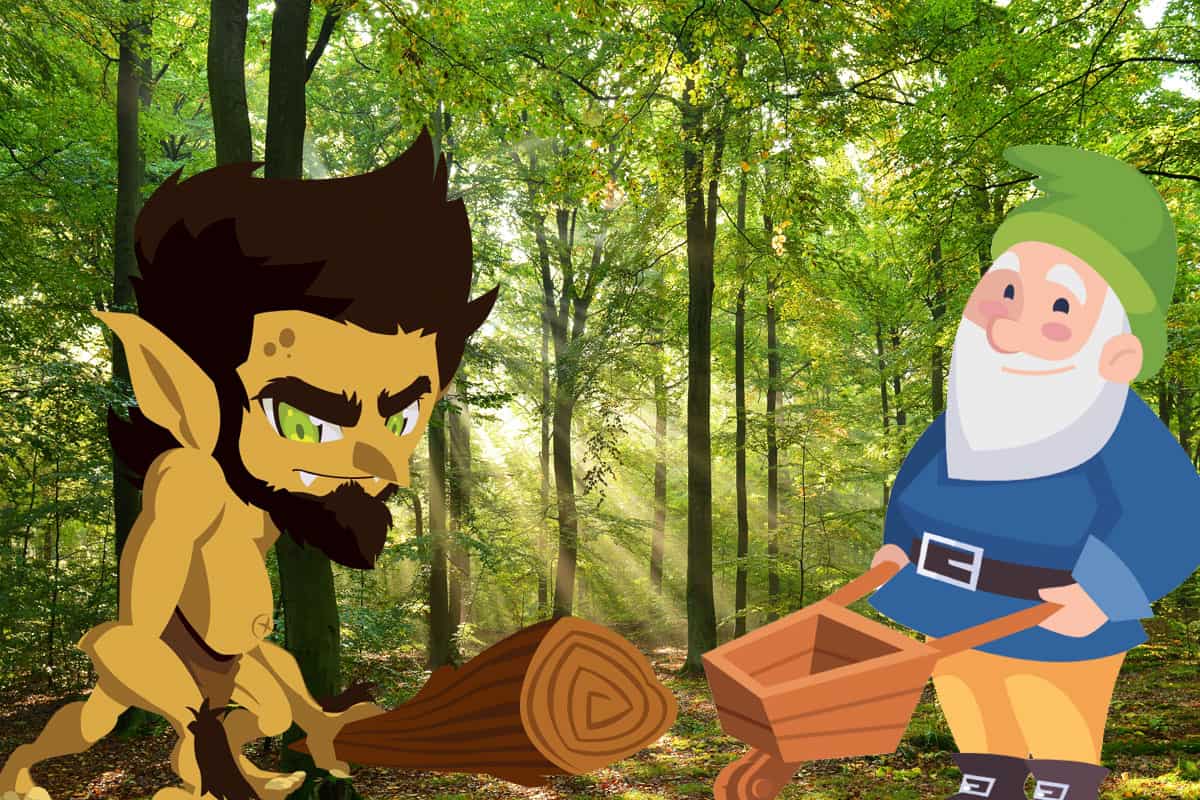 Gnomes and trolls share a common origin in the grand Old Norse mythology and are mythological creatures with their own unique powers. However, trolls and gnomes are very different creatures, and not only in their physical size and shape.

Gnomes are different from trolls in that they are often kind to their human hosts and love animals and the natural world. Trolls are giant and ugly creatures who care little for humans and are often man-eaters and thieves. Gnomes live among humans while trolls lurk in dark woods and caves.

Despite their common origins and their hatred of sunlight, gnomes and trolls could not be more different. Modern retellings of these ancient mythological creatures have kept their different natures as distinct as night and day. Please read on to discover the differences between sprightly gnomes and those dangerous trolls.

The legend of the troll has its origins deep in Norse mythology and appears in the oldest text of Norse Culture called the Prose Edda. The ancient Norse myths refer to the troll and tröll to refer to friends and demons and even werewolves!

The overlap of Old Norse names for the evil entities include:

These terms were interchangeable but had some aspects in common with our modern conception of a troll. The trolls were usually mountain dwellers, abnormally strong and ugly, who were dangerous to human beings.

The Scandinavians adopted the early troll myths and adapted the Norse mythology to create the troll we know today. The word troll is similar to the Scandinavian word for magic, like trolleri and the Germanic word trolldom, which means witchcraft.

The Scandinavian troll was a creature that was old, extremely strong, and rather slow-witted who sometimes had supernatural powers over the elements. The Scandinavians considered the man-eating trolls brutes who turned to stone at the touch of sunlight.

Unlike gnomes, the troll is a stupid and malevolent creature more inclined to dine on a human than help them. Trolls lived in remote mountain caves and sometimes at the ocean, but typically they lived far from human habitation.

The modern gnome became distinct from the Old Norse myths of the Dvegr and Germanic Gitwerc and became the tomte or homestead of Swedish folklore. The Swiss physician and philosopher Paracelsus created the modern gēnomos or ‘earth dweller.’ in the 13th century.

The early origins of gnomes stemmed from the dwarves of Norse lore, who were ugly, malformed creatures who mined metals from deep within the earth. Our modern gnomes carry much of the Scandinavian folklore, where they became diminutive bearded folk with their iconic conical hats of bright red.

Modern storytellers adapted the understanding of the contemporary gnome but kept much of the old Scandinavian qualities. Today gnomes are still mischievous entities that live amongst humans and often hinder or help their chosen human hosts.

Beyond the Americanisation of the troll myth to include the diminutive creatures with their characteristic tufted hair, the traditional troll is large and ungainly. Although several versions of the troll evolved in oral tradition and literature, the most recognized is the large and supernaturally strong beings of frightening visage.

Trolls were giant creatures with oversized noses and ears, often depicted as tufted with hair. The Jotnar descended from Old Norse myths still carry through in their modern depictions of enormous beings with massive limbs. Their features are rugged, worn, and stone-like, and their hair is typically wild.

Modern media often depicts the troll as an ancient, almost scaled creature who sometimes sprouts trees and foliage from its massive limbs. Some older myths even depict trolls with several heads or a single cyclops eye. The common thread seems to be that trolls are rather frightening and ugly-looking.

On the other hand, Gnomes stay close to the Swiss legend of tomte and are diminutive creatures often depicted as old with a flowing white beard. Historians attribute the Norwegians for the conical red hat and beard, which has links to the Old Nick, on whom we base our modern-day Santa.

As homage to the iconic garden gnomes, the modern depiction of gnomes is small men with round cheeks and bellies. They usually sport bright-colored tunics with a belt (much like Norwegen St. Nick) and colorful leggings.

Gnomes often have childlike features even though their beards are snowy white. Although female gnomes are more scarce than male ones in fairy tales, storytellers and myth depict them as comely and shyer of venturing out than their male counterparts.

The modern troll (besides the diminutive troll of popular American Culture) carries much of its Scandinavian heritage. However, earlier Norse myth said they had powers over nature, such as manifesting storms or mist, even hurricanes, and avalanches.

Mostly, however, these colossal and oversized beings have enormous and oversized limbs capable of superhuman strength. Trolls of myth could uproot trees with one hand and hurl boulders the size of small houses easily at their chosen target.

Their enormous strength was inverse to their relatively small brains, which was lucky for their human victims as they were easy to outwit. Troll powers include:

Legends portray gnomes as elemental earth spirits with power over the earth, and myth tells of them passing through the ground as effortlessly as air. Other powers associated with gnomes include:

Myth depicts trolls as primitive creatures who isolate themselves far from human habitation in caves or darkened forests. They are mean-spirited creatures ruled by the survival of the strongest and have an antipathy towards religion and the human race alike.

Older legends tell of trolls kidnapping children, attacking unwary travelers, and even destroying sacred places such as churches if given a chance. Although some tales depict them as hunters, they often prey on wandering human beings who stumble into their territory.

Trolls typically waylay travelers, strip them of their valuables, and even eat them if hungry.

Post-Christian myths tell of their ability to smell Christian blood much like the giant in Jack and the Beanstalk.

Gnomes, on the other hand, are fiercely intelligent creatures who may live to several hundred years. They are typically benevolent to the humans who gain their trust and are helpful and kind to those who respect them and the earth’s creatures.

However, gnomes may take offense at human actions and offer a system of trickery and pranks as a reprisal. They may hide vital objects around an unfavored human’s home or allow their farms or gardens to become infertile.

Typically the modern gnome is mischievous but not malevolent and extremely generous to those humans that they favor. They may help around the home or garden with mending and tending plants and often sow wildflower seeds to beautify a human’s garden,

You are far better off meeting the angriest gnome than you would be meeting a brutish troll in a cave or under a bridge (think ‘Three Billy Goats Gruff.’)

Trolls have little respect for humans and are more inclined to crush your bones in their fearsome teeth than become your ally. Gnomes are helpful, diminutive folk, and if properly respected, they will tirelessly help their humans be happy and prosperous.