Skip to content
Home » Centaurs vs the Minotaur: What is the Difference? 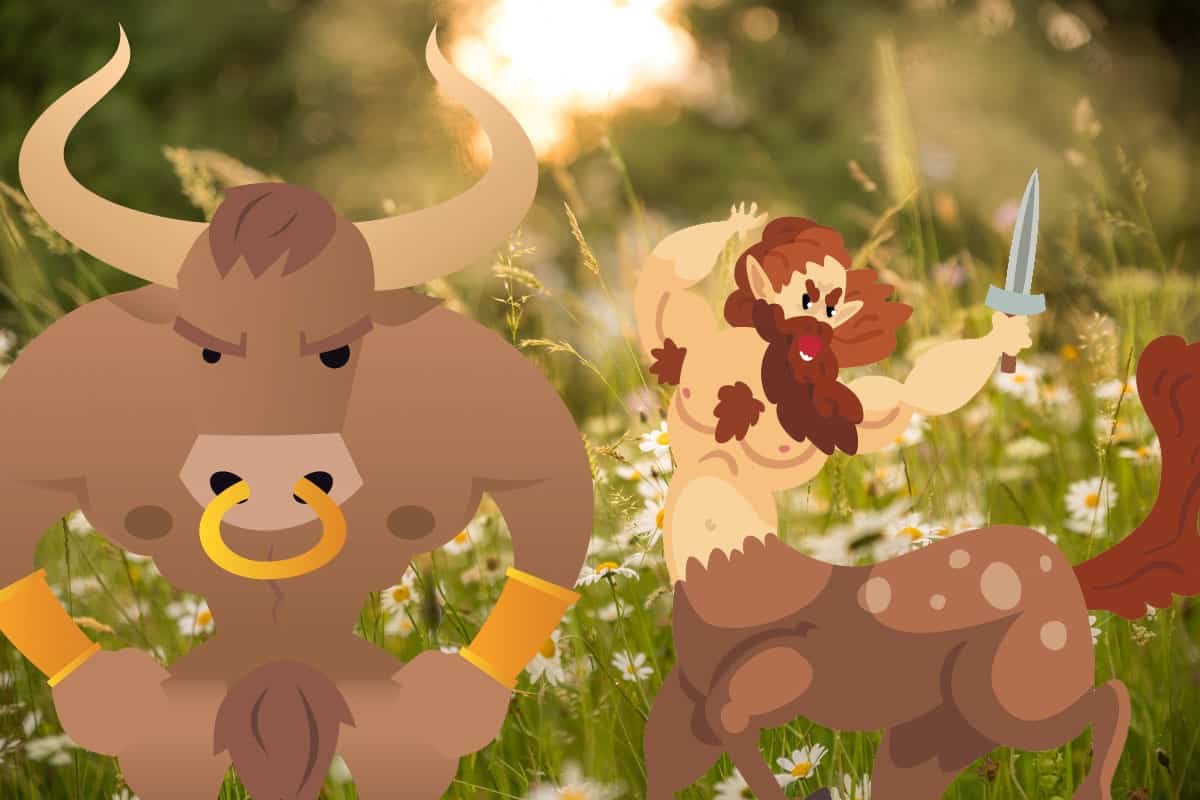 Everyone is familiar with the iconic imagery of the Greek centaur and the Minoan minotaur. Two half man half beast creatures who fight ferociously and have minds of beast and man.

Both the centaur and the minotaur have mysterious origins with mixed lineages. Both have a human parent and an animal or fantastical parent who does not fit the description of normal parentage. But, they differ in some substantial ways. The minotaur is a solitary creature in mythology, since there was only ever one. He is largely misunderstood as an evil being. The centaurs differ since they are many in number. They are usually known collectively as a tribe of centaurs.

These creatures are very commonly known and recognized in art and movies. But, is this who they really are?

The Centaur and Minotaur

The centaur and minotaur have bodies of animals and men. The minotaur is part man, part bull whose imagery adorns many of the halls and palaces of the isle of Crete. The centaur is half man, half horse whose appearance in Greece may have originated as the first account of horse-riding archers from neighboring tribes.

The Myth of the Minotaur

Pasiphae is the mother of the Minotaur. She was the wife of king Minos of Crete who was consumed with an unnatural desire for the white bull of Poesidon. According to Greek interpretations of the myth, the white bull was a gift from the god of the sea to the king of Crete to demonstrate his support of Minos.

But, Minos refused to give the sea god his due sacrifice of the white bull. To make the proud king pay for his crimes, Poesidon punished Minos by filling his wife Pasiphae with an unnatural desire for the bull.

As a result, she could not contain herself and had the inventor Daedalus create a metal bull for her. She mated with the white bull and gave birth to the minotaur. The king was so horrified that he followed the oracle’s advice and made a labyrinth for the minotaur.

Every year, Athens sent 7 virgin girls and 7 virgin boys to Crete as a sacrifice to the monster. Theuseus, the son of the king of Athens, volunteered to go as a sacrifice (sometimes called tribute). He was assisted by Ariadne, the daughter of Minos, who gave him a thread that would prevent him from getting lost in the labyrinth. He slew the beast and freed Greece from the tribute.

The myth of the Minotaur is awash in Greek interpretation. To the people of Crete, the minotaur seemed to represent a wild force of nature which was frightening but not evil. In fact, the son of Pasiphae was named Asterion, and not “Minotaur”. He was labeled as a minotaur upon his birth.

The Myth of the Centaur

The origins of the centaur lie in the myth of Ixion and his lust for the goddess Hera. Hera was the wife of Zeus, the lord of Olympus. Ixion was a king who was invited to the court of Zeus to dine with the gods. While eating, he could no longer resist the goddess and groped her.

Zeus was so enraged by this act of violation that he cursed Ixion. He created a cloud, Nethele, and caused Ixion to mistake this cloud for Hera. He made love to the cloud and got it pregnant. From this union was born Centaurus. Centaurus was not a centaur, but rather just a very ugly man. He became so disappointed in love that he eventually found company with female horses.

From the union of Centaurus with the mares there were born the centaurs. The centaurs were known for their insatiable sexual appetites. They were considered dangerous to travelers and women who may be killed or raped by them.

Only a few centaurs were known to be wise and civilized. Two of the most popular are Chiron and Philoctetes. These centaurs were sometimes depicted in art as having the full body of a man attached to the rear of a horse. Some experts believe this depiction was intended to symbolize their more human nature when compared to their siblings.

Many historians believe the centaur was originally how the Greek and Minoan cultures saw mounted archers from neighboring tribes. These archers would have been seen as barbaric when compared to the cultures of the Mediterranean. This would explain the beast-like nature ascribed to the centaur.

Perhaps the most well known centaur is the zodiac, Sagittarius. Sagittarius actually means archer rather than centaur. The myth of the constellation follows the tragic death of Chiron at the hand of Hercules. He was shot with a poisoned arrow and died; but was honored with a place in the heavens as the archer, Sagittarius.

Both the centaur and the minotaur share mysterious origins which probably came from legends of foreign cultures. The symbolic meaning of these monsters was the human capacity to behave in ways which seem inhuman.

These creatures shared violent moods, insatiable appetites, and a horrifying nature of blood lust. But, these creatures also had their beautiful aspects, which may have been intended to embody the terrifying part of nature with the beautiful parts.

They have devine origins and super human abilities, but they both differ from the other Greek demi gods and heroes. The heroes of Greece represented a sense of order, whereas both the minotaur and the centaur represent a form of chaos and destruction.