Skip to content
Home » Ogres vs Trolls: What is the Difference? 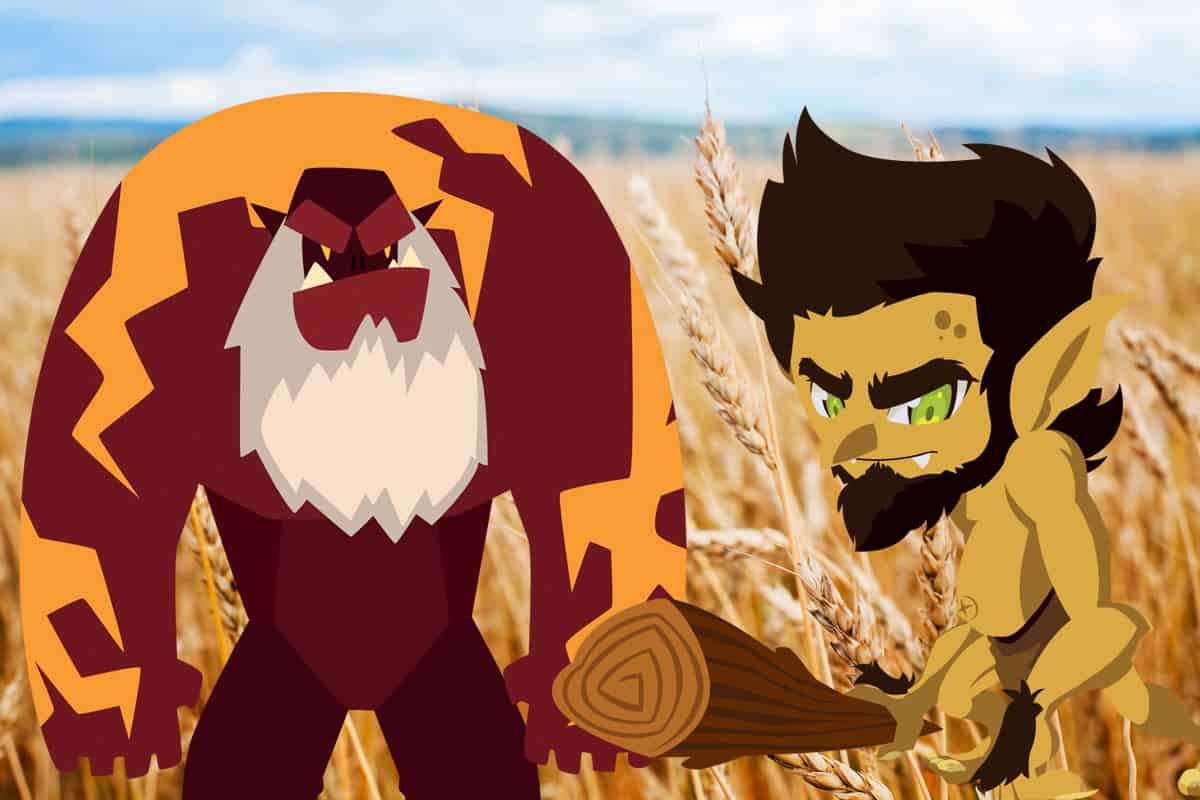 Ogres and trolls are often confused because of their size and frightening appearance. Both are malevolent  creatures with a penchant for evil acts and a taste for human flesh. However, there are certain differences in their behaviors and appearance that set them apart from one another in myth.

Ogres descend from the god Orcus, an Etruscan deity who ruled the underworld, while trolls emerged in Old Norse history and Scandinavian folklore and legend. Ogres are rapacious and barrel-bodied giants with pigmented skin, while trolls are stonelike and craggy.

Ogres are distinct from their troll cousins, often more intelligent, with an insatiable desire to gorge on human meat. Troll folklore usually refers to them turning to stone in sunlight and forming natural features of the Scandinavian countryside. These two lumbering giants may be challenging to tell apart, but here are the main differences between these two frightening creatures.

The fearsome, infant devouring ogre has been part of our cultural myths and legends far back into antiquity. These oversized, hideous cannibals may resemble humankind in their features, but legends tell of their inhuman greed for flesh.

Popularised by fairy tales such as Jack and the Beanstalk and Jack, the Giant Killer, the ogre typically exhibits giant proportions and a ravenous appetite for human prey.

Other famous ogres of classic literature include:

Historians associate the ogre’s name with the Old French word Orcus, the giant Etruscan deity that ruled the underworld. The ogre appeared in writing for the first time in the 12th century in Chrétien de Troyes’ Perceval. In this work, historians link the ogre with ancient Britain.

Some theorists suggest that the ogre myth may have originated from the time in history when Neanderthals coexisted with our Cro-Magnon ancestors. Various authors adapted and used the ogre myth in fairy tales up to modern literature in the form of Tolkien’s Lord of the Rings trilogy.

Trolls emerged in Old Norse mythology and the ancient Prose Edda of the early 13th century. The myth refers to troll and tröll, which had multiple meanings ranging from fiend and demons to werewolf and giants.

The precise origins of the troll myth are difficult to pinpoint as the name troll covered many different malevolent beings in folklore. The various Norse names associated with our conception of modern trolls include:

Although the exact origin of the troll myth is convoluted, the myth generally shared common characteristics of the modern trolls, such as:

Scandinavian folklore adopted the early myths of the troll and adapted it to create the troll we recognize today. The word troll is similar to the Scandinavian word for magic, trolleri, and shares the Germanic origins of trolldom, meaning witchcraft.

Ogres were typically fearsome in aspect, with thick, rounded frames and shaggy beards and hair.

Although they weren’t always large fanged giants, generally, folklore describes the ogre as:

Unlike the stony and scaled qualities typically found in trolls, the ogre has a more human-like appearance and skin, although it is often a strange hue. Ogres’ physical aspects tend to be more consistent than the wider variety of trolls’ physiology in folklore.

People often confuse the ogre and the troll due to their enormous size and their somewhat frightening appearance. However, the troll is distinct from the ogre, although they may share similar Old Norse associations with the legendary Jötunn or giants.

However, trolls are more varied in appearance than the ogre. A more minor, less well-known myth of diminutive trolls exists alongside the popular modern conception of our current trolls called huldrefolk.

These trolls are more human-like in appearance and even quite comely. However, their animal tails generally give away their real identities. Mythologists often link the ogre to the Japanese Oni myth, who are fearsome, horned creatures with sometimes multiple eyes and bear striking red skin.

However, the more accepted modern notion of a troll refers to the slow-witted lumbering giants of myth and fairy tales.

The mythological troll has typical features such as:

Some trolls of myth appeared even more bizarre with multiple heads or one cyclops-like eye in their forehead. The troll typically exhibited enormous strength and giant limbs, with hands that could easily wield a large tree as a club against their foes.

Ogres are not typically linked to magical powers in modern mythology. Their abilities rest on their enormous strength. They are often depicted as cannibals, even eating their own when they get the chance.

Unlike their troll counterparts, ogres sometimes show cunning and intelligence and often communicate with humans, such as the ogre in the Fairy tale Puss in Boots. The ogre in this tale has the magical ability to shapeshift into different creatures.

Ogres also show the ability to scent human blood and are often attracted to Christian blood in particular. They often have the capacity to consume enormous amounts of flesh in one sitting. Some historians suggest that the ogre myth played a crucial parental function to subdue naughty children and discourage them from wandering out of their parental safety.

Unlike popular American culture’s stubby-legged and sometimes helpful trolls, trolls are typically giant and slow-witted creatures of superhuman strength. Early troll myths are linked to magical abilities, exemplified by the link between the name troll and Scandinavian words for magic, such as trolleri.

Over the years, trolls’ magical powers fell away somewhat. However, some folklore but several fairy tales still refer to the troll’s ability to shapeshift, such as Puss in Boots and Hop-o’-My-Thumb. More modern versions of the giant trolls used their size and strength rather than magical powers to defeat their enemies and devour their human prey.

Luckily for humans, the dull-witted giants are often easily outwitted by their human prey. The myth also often tells of the trolls turning to stone if sunlight touches their skin. In Norway, many stone formations are thought to be trolls turned to stone.

Ogres have an insatiable appetite for human flesh, particularly those of infants. The fact that trolls frequently lurked in remote areas in caves, woods, and bridges made them a strong cautionary tale for children who might wander into danger.

Unlike trolls, fairy tales often associate the ogre with wealth, lavish abodes, and organized family units, unlike the usually solitary troll. Much like the giant in Jack and the Beanstalk, ogres could often communicate with humans in their human tongue.

Although trolls also sometimes lived in family units, generally, the unit was disorganized and governed by the strength and survival of the strongest.

Unlike the Disney diminutive troll helper, the Scandinavian trolls would give American children nightmares. These trolls loved nothing more than to dine on the tender flesh of naughty children, which they would snatch from their beds in the night.

However, trolls extended their malevolence to waylaying travelers who stumped into their territories. They would attack these poor travelers and strip them of their valuables and sometimes dine on their flesh. On the other hand, ogres were often marauders and child snatchers and are not so strongly associated with thievery.

Trolls are more savage and live in primitive units where strength and savagery dictate the leadership of their evil band. They are a barbaric race, governed by physical power and greed and luckily rather slow-witted.

Ogres and trolls share many of the same behaviors and intimidating size and strength. If the giant is a strange hue and stout and portly, chances are you are dealing with an ogre. If the giant is stonelike and rugged, you are probably face to face with a troll. Either way, it is best to run because neither of these creatures is likely to be friendly.