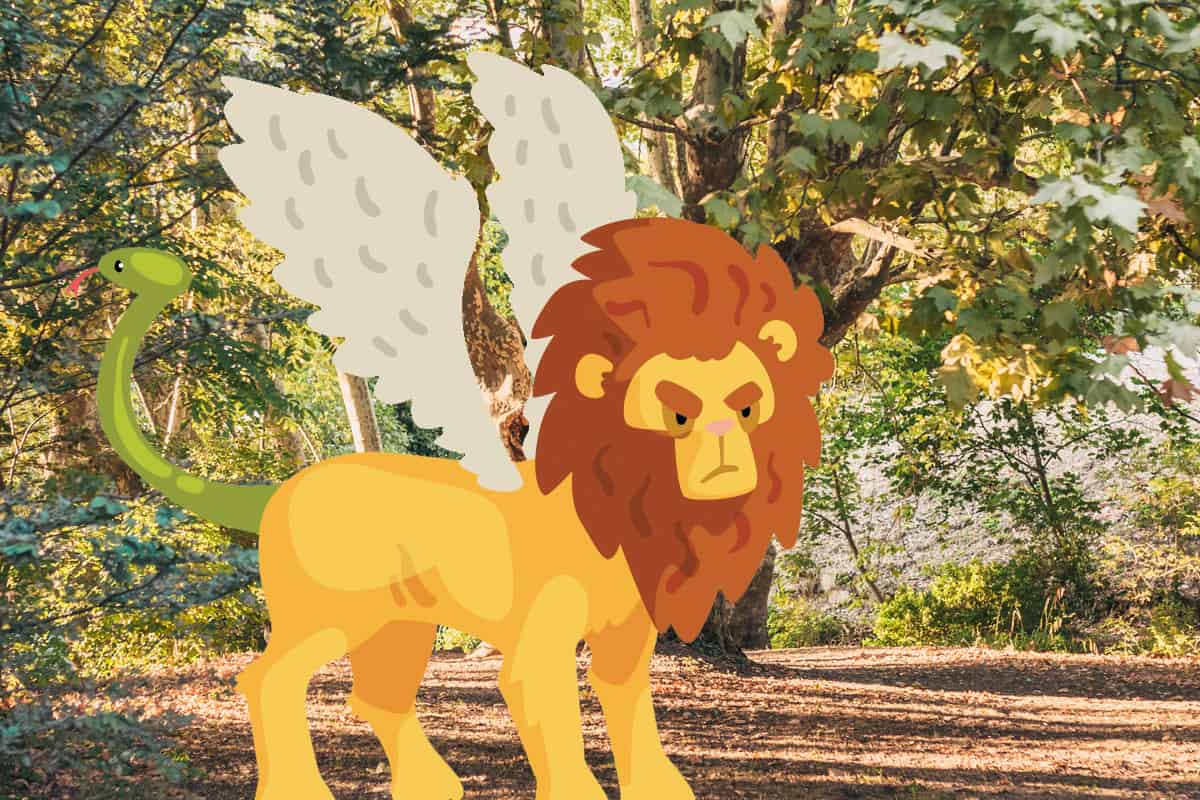 The Chimera (or chimaera) is a Greek mythological creature who was a child of the monstrous giants Typhon and Echidna. Nowadays, it is also used as a name for any monster who fits its description. She was a female monster that had the head and body of a lion, but another head (that of a goal) coming out from her back. She also had a tail that ended with a snake’s head.

Various representations of the Chimera and chimeras in general add bits from different animals to emphasize her strangeness. All agree, though, that they are dangerous!

Just a Few Facts about the Chimera

1. Through her parents, the Chimera was sibling to many Greek monsters and creatures

The offspring of Typhon and Echidna included:

* In some versions, the Sphinx and the Lion are in fact the Chimera’s children rather than siblings.

No doubt it referenced the goat head on her back. For comparison, her mother Echidna’s name meant “she-viper” for her snakelike body.

3. She was considered a foreign creature, who lived in Lycia, not Greece

The Lycians lived in the area previously known as Lycia, an Anatolian geopolitical region which nowadays makes up the Turkish provinces of Muğla and Antalya.

4. Though she was raised by a human man, the Chimera grew to be a great purge of humanity

Her foster father was Araisodarus, father to two famous Trojan warriors. When the Chimera was grown, she left to wreak havoc on mankind. She devastated the crops and killed wherever she went.

5. The Chimera had breath made of fire

Usually, the fire only came from her lion head, but some stories tell of fire breath from all three of her heads.

5. The Lycian king Iobates hated the hero Bellerophon, so tried to get the Chimera to kill him…

He sent Bellerophon, who was exiled to his land, to kill the Chimera. He wanted him dead but couldn’t murder a guest due to the Greek divine law of xenia, guest right. Since nobody had ever lived after meeting the Chimera, Iobates considered Bellerophon good as dead. Indeed, when Bellerophon first met the Chimera, her sheer strength and power almost overwhelmed him.

6. …but she was no match for the hero

Bellerophon captured the winged steed, Pegasus, as his mount. The heat from the Chimera’s breath was unbearable and, even flying on Pegasus, he couldn’t get near her. So, he attached a block of lead to his spear and flew at the creature. As he pulled away, he lobbed the block, so it landed in her throat. The lead melted because of the flames of her breath, and she died of suffocation as it clogged her airways.

7. There are many creatures in other ancient myths that have similarities to the Chimera, as well as in post-ancient historic literature

Some examples of this include:

8. Some western scholars of mythology refer to Chinese winged-lion or mixed-creature figures collectively as ‘chimeras’

This was a practice started by French ethnographer Victor Segalen, and includes such creatures as bixie, tianlu, and qilin. However, this is not a very popular practice.

9. The modern Turkish area known as Yanartaş was once called Mount Chimera, and may have been the source of the Chimera legend

The place is known for ever-burning fires that never go out, like the Chimera’s breath. The mountain feeds lions and goats in some places (and kills in others) and is also filled with snakes – describing the three heads of the creature.

10. Ghost sharks, also known as Chimaeras, are named for the mythological Chimera.

They are cartilaginous ancient fish related to sharks and rays and they usually live on the sea floors. Most species of these fish have mismatched think bodies and bulky heads, odd eyes, wing-like fins, and a single gill.

For example, one human “chimera” had two different blood types, as some of her twin brother’s cells lived in her body. While it’s very common in plants (and obvious with stark color contrasts), there have been less than 100 cases reported amongst humans.

12. The Chimera or chimeras have appeared in modern times across countless pop culture mediums

Some of the most famous include:

There are also professional wrestlers and musicians using the name!

Chimera and the idea of chimeras is very much part of the modern popular imagination. The word chimera is now used in scientific communities to refer to any organic thing made up of seemingly dissimilar parts, as well as in general language for any combination that shouldn’t exist!