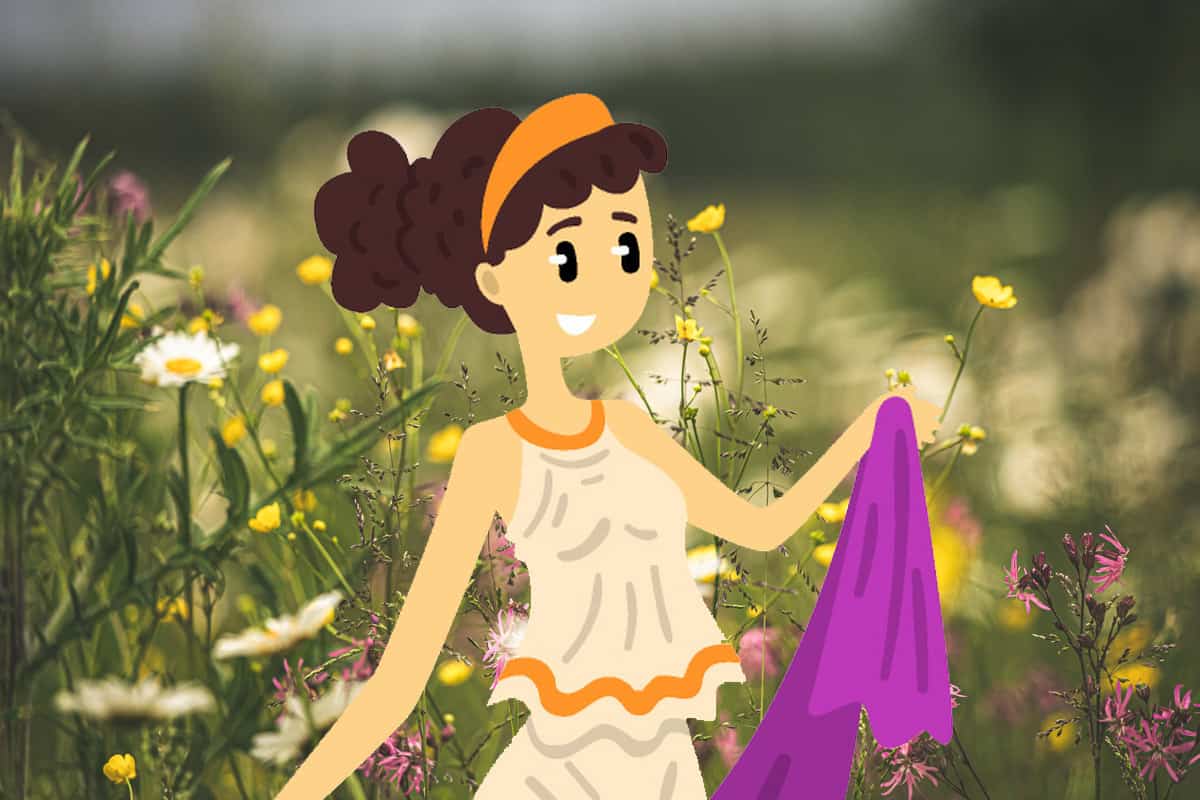 Hera was the queen of the gods, daughter of Titans, and wife of Zeus. She was the second most significant member of the Olympian gods after Zeus himself. She was also the mother goddess of marriage, domesticity, and family.

However, Hera had a temper. Even Zeus was said to cower before her rages. Unfortunately for him, he had a tendency to cause said rages with his frequent infidelity. Hera had a bad habit of taking out her anger on Zeus’s extramarital lovers and illegitimate children.

The following myths are some of many surrounding this fascinating goddess.

Zeus took several wives, but he set his heart on the seventh and most important being his sister, Hera. He had fallen in love with her, unlike his previous wives, many of whom he just approached with desire.

Hera rejected Zeus’s suit several times. Zeus decided to take advantage of Hera’s kindly nature toward animals and turned himself into a sparrow. He flew through a storm and landed, freezing, at her feet. Hera took the sparrow inside and held it to her breast to warm it, unaware it was Zeus.

Zeus transformed back into his original form and raped Hera. Hera, embarrassed and ashamed, agreed to marry him after this. She was then crowned the queen of heaven.

With Zeus, Hera had several daughters, but only one son, Ares. Previously, Zeus had swallowed his wife Metis while she was pregnant to prevent a prophecy where he would be overthrown by his son. One day, Metis’s child, Athena, was born fully adult and battle-ready from Zeus’s forehead.

Athena quickly became Zeus’s favorite child. This made Ares very angry, and Hera became jealous of Zeus’s love for a daughter that was not her own. In revenge, she created her son, Hephaestus, through parthenogenesis.

However, Hephaestus was born with a crippled foot. In one version of the story, a disgusted Hera tossed him from Olympus and into the sea, where he was rescued and raised by Thetis. In another version, he was cast from Olympus by Zeus while trying to protect Hera from his advances.

Either way, the treatment left Hephaestus bitter and angry. As an adult, he built a gilded throne for Hera, which she sat in. However, the throne was bespelled so that she could never escape until Hephaestus agreed to it. The other gods begged, but Hephaestus would not budge. Finally, Zeus offered Hephaestus the hand of Aphrodite in marriage, and he agreed to let Hera go.

With a woman named Alcmene, Zeus produced a son, Alcaeus. He was to be raised by his mother and his foster-father, Amphitryon. However, Hera discovered the pregnancy and was extremely unhappy about it.

Hera tricked Zeus into promising that Alcmene’s firstborn son would be blessed. Then, she interfered with Alcaeus’s birth so that his twin (Amphitryon) was born first. When the boys were toddlers, she sent poisonous snakes to kill Zeus’s son. However, he strangled them and played with the bodies like a toy.

To protect him, his mother renamed him Heracles (or Hercules), meaning ‘The Glory of Hera’. Sadly, the attempt at flattery did nothing to soothe Hera’s ire.

Zeus brought Heracles to Hera and tricked her into nursing the child, pretending he was Ares. When Hera realized the trick, she pulled the infant from her breast, spilling milk that became the galaxy.

As an adult, Heracles attempted to make sacrifices to Hera, but she always rejected them, eager to prevent any glory upon her step-son. She also intervened in his Labors, sending extra monsters to harm and kill him. For example, when he fought the Lernaean Hydra, she sent a giant crab monster.

Later, Heracles and Hera overcame their differences after he saved Hera’s life. She officially recognized him and even gave her daughter Hebe as his wife.

Hermes, like many, many others, was a product of one of Zeus’s affairs – this time with a nymph, Maia. However, Hermes was born with adult intelligence, and he knew that he would be under threat from Hera if he did not act fast. So, he arranged things so that Hera mistook him for Ares and suckled him at her breast. By the time Hermes finished feeding, Hera had already bonded with him.

Unlike most of her stepchildren, therefore, Hera had a good relationship with Hermes. He served as the herald to the gods and his goals often aligned with Hera’s.

Leto was a lover of Zeus and a daughter of Titans. When she became pregnant with the twins Artemis and Apollo, Hera was incensed. She cursed Leto so that she would be entirely unable to give birth while touching solid ground. Leto, on the brink of childbirth, traveled far and wide searching for a place to have her children.

Poseidon and Zeus eventually took pity on Leto and led her to the floating island of Demos, where she birthed her twins, who became great hunters and Olympians.

Hera had a cordial relationship with the twins, but never got over her hatred of Leto. When the twins were grown, Hera sent the giant Tityus to rape Leto. Artemis and Apollo discovered the plot and killed Tityus with arrows.

6. The Madness of Dionysus

Dionysus was the only half-human Olympian, the son of Zeus and Semele. For him, Hera bore a special hatred rivalling even that of her distaste for Heracles. When he was still in the womb, she tricked Semele into viewing Zeus’s true form, which killed her instantly. Zeus saved the fetus and sewed it into his own thigh.

When Dionysus was born, Hera attempted to cause his death several times. Hermes took the baby to be raised by nymphs, and Hera drove them mad. They tried to kill the child, but Hermes saved him. Later, Hermes took him to his maternal aunt, Ino. Hera drove her mad and murderous as well.

Later in Dionysus’s life, Hera also cursed him with madness and expelled him from Olympus, sending him wandering. However, Dionysus invented wine there and returned from his travels, triumphant.

Once, Hera tried to take over the throne of Olympus and rebelled against her philandering husband with the help of Athena. She tried to persuade Poseidon to help, but Poseidon didn’t want the throne and his heart wasn’t in it.

Zeus quashed the rebellion. Athena wasn’t punished for her part in the rebellion as Zeus couldn’t bring himself to punish her for her frustrations. However, he bound Hera by her wrists in a void overlooking Chaos, with anchors hanging from her ankles. Hera was only released when she promised to never stand against her husband again.

8. The Scourge of Io

Io was an Argive princess. She was a mortal, and she was the foremother of the likes of Cadmus, Perseus, and Heracles. Zeus fell in love with her and started visiting her in secret. One day, Hera saw a lonely thundercloud traveling toward a secret place and correctly guessed that it was Zeus sneaking off to see a mistress.

Zeus realized that Hera had discovered his new love, and so he transformed Io into a white heifer to protect her. Hera was not fooled, and she requested the white cow as a gift. Zeus could not deny her the request without revealing his affair.

Hera tied the cow to a stake in a field and sent her hundred-eyed giant, Argus Panoptes, to watch over her and prevent Zeus from visiting. After some time, Zeus sent his son Hermes to rescue Io. Hermes played music to lull the giant to sleep, then slayed him. Zeus freed Io. Hera put the eyes of Argus onto the tail of her favorite bird, the peacock.

Io escaped, still in the form of a cow. Hera sent gadflies to painfully gnaw at her hind, leaving her to wander the world without rest. Io eventually encountered Prometheus, who prophesized she’d be turned human once again and go on to be a mother of kings.

Hera continued to persuade her, but Io found her way into Egypt and out of Hera’s domain. The Egyptians worshipped the cow and made her their goddess, Isis. Hera permitted Zeus to change Io back to human as long as he never saw him again, which she did. Her son by Zeus went on to be king of Egypt.

Thetis was a sea-nymph raised by Hera and loved by both Poseidon and Zeus, who both sought her hand as a second bride. However, when a prophet announced that Thetis’s son would be greater than his father, both Zeus and Poseidon withdrew their suit and suggested she marry the human king, Peleus, instead. She agreed, partly to please her foster-mother, Hera. Thetis and Peleus’s son would later be the great Greek hero, Achilles.

At the wedding of Thetis and Peleus, all the gods and nymphs were welcome. However, at Zeus’s order, Hermes turned Hera’s daughter Eris away at the door. Eris was a goddess of discord, and Zeus did not want her ruining the wedding. Eris cursed the event and tossed a golden apple of discord through the door to sow chaos. The apple was embossed with the words ‘for the fairest’. Athena, Hera, and Aphrodite all argued that this referred to them.

After some time, the bickering goddesses appeared to Zeus. Zeus did not want to risk offending his wife, his favorite daughter, or his ward Aphrodite, and so he passed the judgement on to a young man named Paris.

Each goddess offered the young man gifts. They all stood naked before him. Hera offered him power and control over all of Asia. Athena offered wisdom and battle glory. Aphrodite, however, offered him the hand of the most beautiful woman in the world, Helen of Troy.

Paris, a young prince still in his late teens, was most tempted by the woman. He agreed to Aphrodite’s bribe and handed the apple to the love goddess. Hera and Athena were both absolutely furious. These events, spurned on by Hera and Athena’s rage, were the direct cause of the Trojan War.

Lamia was an extremely beautiful woman beloved by Zeus who bore him many children. Hera discovered this and sent a special kind of madness to Lamia, causing her to turn monstrous and kill all of her own children. Once Lamia’s senses returned, she was entirely broken by her grief and her horror by what she had done.

Hera was not yet finished, however. She cursed Lamia so that the woman would never be able to sleep. This meant that, even when she lay down to rest, the image of her dead children was burned into her eyes, constantly replaying and driving her deeper into madness. Eventually, Zeus gifted Lamia with removable eyes so that she could sleep.

However, this was not enough to cure Lamia from the horrors brought upon her by Hera. Hera gouged out her new eyes and, though Zeus gave her yet another replacement, Lamia lost her mind. She transformed into a snake-like vampiric monster and started hunting and killing the children of others. In some stories, she even tore the fetuses from pregnant women.

Echo was a nymph and a faithful servant of Zeus. She was an Oread nymph; a daughter of Ouranos and a creature of the mountains. Though she was not a lover of Zeus, she was commanded by him to mislead Hera while he consorted with others. This worked for some time.

However, Hera discovered the trick. She became angry with Echo, and cursed her. For the rest of her life, Echo could only repeat back words that were spoken to her. This ended in tragedy when Echo fell in love with Narcissus, and her curse meant that the man could not understand how she felt and instead fell in love with himself.