Skip to content
Home » 17 Facts about the Manticore: Dante, Trumpets and India 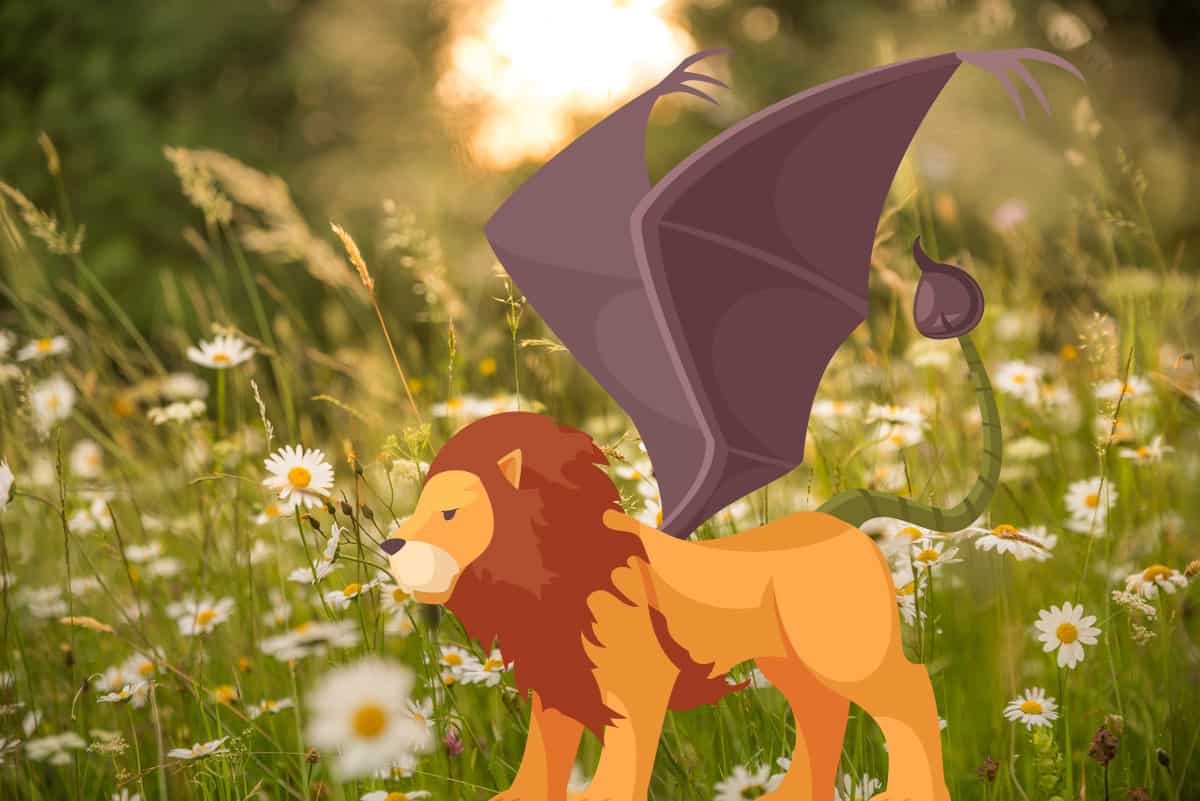 The Persian manticore is one of the most dangerous beasts in mythology. Its name means “man-eater”, and it is a huge creature with the body of a lion, and a spiked tail or the tail of a scorpion. It is either related to or the same creature as the mantyger, and it is an incredibly dangerous predator that devours its victims completely, leaving nothing behind – not even bones or hair!

Just a Few Facts about the Manticore

1. The Greeks brought the manticore from Persia to Europe

The Greek physician Ctesias of Cnidus first commented on the creature after a trip to Persia in the 5th century BCE. Much later, the Roman-born Greek scholar Claudius Aelianus wrote a complete section about the manticore in his book The Characteristics of Animals, describing it as a real Indian creature.

2. In Dante’s Inferno, Geryon, the monstrous grandson of Medusa, is represented as a manticore

Unlike any other depiction of Geryon, this creature was the Monster of Fraud. He had the body of a wyvern, huge dragon-like wings, lion-like paws, a scorpion’s poisonous tail, and an honest man’s face.

3. The mantyger was either a cousin of or a version of the manticore

Both were very similar in appearance, but the mantyger had monkey-like feet or those of a baboon, short horns on its head, and tusks like an elephant. The name mantyger had nothing to do with tigers!

4. There were three sets of teeth in a manticore’s mouth

5. The stings in its tail could be fired autonomously, and were deadly

If the manticore sent out its quills, it could kill any creature except an elephant, who would become incapacitated instead. Each sting was over a foot long, and wherever they landed, they grew more stingers from the ground.

6. The Persian King was apparently given a manticore from India as a gift

It was this manticore that Ctesias claimed to have seen and wrote about in detail.

7. Young boys in India would hunt young manticores and crush their tails with stones

This prevented the creatures from ever growing in the poisonous stings that could so easily kill.

8. The manticore would fight and eat multiple men at a time

It wouldn’t be satisfied with one but would lie in wait for groups of two to four to arrive before attacking, overcoming, and devouring them. Its favorite food was human flesh, and it would only be satisfied with that.

9. The manticore was used as a symbol of power on a number of English hereditary seals

William Hastings, the 1st Baron Hastings, added a manticore to his crest in the 14th century CE. In the 16th century, he was followed by Robert Radcliffe, 1st Earl of Sussex, and Sir Anthony Babington, who would be accused of plotting against the queen.

10. Some researchers have linked the Andalusian mantequero with the manticore

The mantequero, also known as sacamentacas, was a creature who stole babies and children and subsisted on their blood and fats. The word is also used to describe actual serial killers who operate in a similar manner. The link was first suggested by Gerald Brenan.

11. Most modern depictions of manticores have wings

One of the most prominent examples are the manticores represented in the Dungeons and Dragons roleplaying series, though there are many more. With this trait, they are much more strongly mixed in with the myth of the mantyger.

12. The manticore made a sound like a trumpet being played when it spoke

According to Pliny, there was an Ethiopian variant which, rather than just trumpeting, could also easily mimic human speech.

13. Though it was in debate since ancient times, the manticore was still a creature that people believed existed until sometime in the 17th century

It was often used as an example of the strange, exotic creatures in foreign lands and told as a danger story to children.

14. The color of a manticore was blood red

Its fur, face, paws, and tail all followed this color scheme, and according to some sources were dyed this way after its kills.

15. The manticore would hide in reeds and show only its face so that people would approach

Those who saw the face of only a bearded man would try to help him up, but as soon as they got close, the manticore would devour them – not just their bodies and bones, but their clothes and possessions as well, drinking all the blood and leaving no evidence behind.

16. No person could kill a manticore

Their fur was impervious to weapons or attacks, and it could overpower any number of men if at all threatened. Even if it was killed by damaging its mouth, the creature could resurrect. The only animal who could ever stand against it was an elephant. Crushing the tails of the young was the only way to gain any protection as their deadly stings then weren’t a threat.

17. Though it relied mostly on its teeth and stingers, the claws of a manticore were also an incredibly deadly threat

One swipe from a manticore’s paw could slice a human body into ribbons. Their paws also carried them swiftly, and they could literally run like the wind, meaning that no prey could ever escape once it was in a manticore’s sight.

The manticore is not often spoken about in the western world as commonly as other, similar beasts, such as its cousin the Sphinx. Perhaps this is because the creature is so brutal, so dangerous, that it’s hard to turn its horrid story into a fairytale for young people!