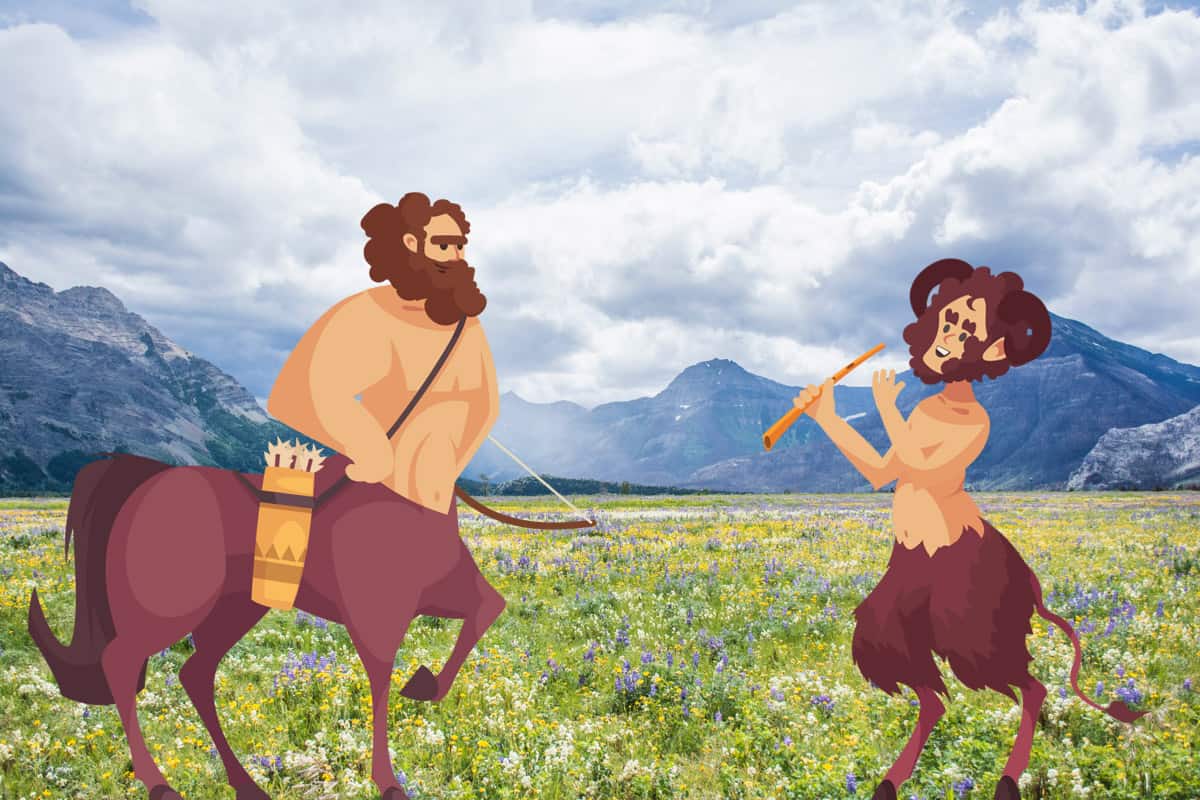 From the mermaids and sirens of Greek mythology to the Sphinx of ancient Egypt to the deity Narasimha in the Hindu pantheon and more, half-human, half-animal or beast creatures exist across history, culture, and mythology. Two of these creatures, which maintain common footholds in high fantasy and contemporary pop culture, are the centaur and the satyr.

The centaur and satyr are notably similar, particular in their propensity to general vice and debauchery. Despite their similarities, the centaur and satyr maintain distinctly different positions within the Greek pantheon. Whereas the centaurs have a singular origin story the satyrs lack such clarity. In addition, centaurs tend to be viewed in terms of good and evil or with a human and beast dichotomy. Satyrs, on the other hand, have maintained their symbolism of fertility, debauchery, immodest sexual appetite, and gluttony throughout history.

Regardless, both creatures are used to teach many lessons and morals within several Greek myths and keep a strong foothold in contemporary fantasy.

What is the Difference Between Centaurs and Satyrs, Really?

Both centaurs and satyrs take their origins in Greek mythology. Centaurs are the offspring of Ixion and Nephele. Ixion was the king of the Lapiths, an ancient tribe of Thessaly or Aeolia. This is the same place that is depicted as the home of the wind god in Homer’s The Odyssey. Nephele was a cloud Zeus had shaped into the image of Hera.

Hera was Zeus’s wife and he believed that Ixion was attracted to her. Unwilling to trust Hera to remain faithful despite the fact that she was the goddess of marriage and took that responsibility seriously or acknowledge his own extra-marital affairs and the ongoing saga they play in the greater Greek library, Zeus had formed a cloud into the image of Hera to tempt Ixion with at a feast. Ixion ultimately fell to temptation and had an affair with Nephele which resulted in the birth of the centaur race.

The clearest depictions of the origin of satyrs likely come from Hesiod’s fragments, a partial set of ancient Greek scrolls containing various myths, Greek cosmology, and general daily life practices such as farming and country life. According to these, satyrs are the children of the Hecaterides, the five nymphs of rustic dance. They are commonly associated with the Greek gods Dionysus and Pan.

Classists also note the similarities between the satyrs and other half-human, half-animal hybrids in regards to both appearance and behavioral characteristics. There seems to be a theme across cultures that regard these hybrids as mischief-makers, womanizers, and engagers in general debauchery.

The standard image of centaurs has remained relatively stable over time. They are depicted as having the torso and upper body of a human but the lower body and legs of a horse.

Satyrs on the other hand originally were depicted as having the tail and ears of a horse. The rest of their body would be primarily human but have distinctly hairy and animalistic features. Early depictions of satyrs have them painted naked, often with rather large erections. Unlike centaurs, there are no stories or paintings of female satyrs.

Over time, the image of satyrs came to reflect that of the god Pan who had the lower body of a goat and the upper body of a man while remaining bi-pedal.

Both creatures are prone to drink, lust, and general inhospitality. They are also both frequently associated with the god of wine, fertility, insanity, grape harvest, orchards and more – Dionysus.

Centaurs in particular may be seen as symbolic of the internal war between human and animalistic qualities. They are symbolic of the human desire to give in to passion and respond with emotion rather than logic. Despite their generally raucous behaviors, they were also depicted as fierce warriors, skilled archers, and had the potential for civility.

In contrast, satyrs were frequently regarded as symbols of fertility and gluttony. Their association with general vice and debauchery was regarded as an example of the most base human instincts when left unchecked. Such was their cultural influence that they inspired the term commonly used to describe hypersexuality in men – satyriasis.

Like most species, mythological and otherwise, there are always a few outliers – characters who do not act in accordance with standards and stereotypes. Of the centaurs, there is most notably Chiron and of the satyrs there is Silenus. In both cases, their distinction is shown in their role as teachers and tutors.

Chiron was considered to be exceptionally wise and just and his knowledge of medicine profound. He was the tutor to many great Greek heroes including Hercules and Achilles. His death is most notable in that he gave up his immortality for the sake of Prometheus – who had sacrificed himself to give humanity fire. After his death, he could be found in the stars as the Centaurus constellation.

Silenus was the tutor of Dionysus. Unlike Chiron, he was still known for his drunkenness and was often depicted as being too intoxicated to walk. As a result, he had to be carried or propped up by other satyrs. Given that Dionysus was the god of wine, this most likely did not create a problem in their student-teacher relationship. In fact, some myths suggest that in a state of intoxication Silenus had additional gifts such as extra knowledge and the ability to make a prophecy.

Silenus can be found in the myth of King Midas. According to that myth, Dionysus gifted King Midas the power to turn anything he touched into gold after King Midas captured Silenus but chose to treat him favorably.

In contemporary culture and high fantasy genres, both centaurs and satyrs are more family-friendly in their depictions and actions than they are in old myths. But maybe one of the most true-to-history examples can be found in Harry Potter and the Order of the Phoenix. The centaurs here are depicted as skilled warriors and generally wise creatures who prefer their isolation. They seem to be harmless unless their territory is invaded. Although the choice to leave Delores Umbridge to the mercy of the centaurs does allude to the beast-like nature they can have.

Other examples of centaurs can be found in C.S Lewis’s Chronicles of Narnia and in the Percy Jackson & The Olympians books. In both cases, the centaurs are seen as fierce warriors, maybe prone to a bit of drink, but generally siding with the heroes.
One of the most classic examples of satyrs in contemporary culture is the character of Mister Tumnus in The Lion, The Witch, and the Wardrobe. Another famous example is found in Disney’s adaptation of the Hercules myth. The character Philoctetes who acted as a teacher and coach to Hercules was a satyr. Despite a general trend of portraying satyrs as kind characters and even sometimes teachers in pop culture, Philoctetes stayed true to mythological roots in the sense of his relatively lewd and stubborn nature.