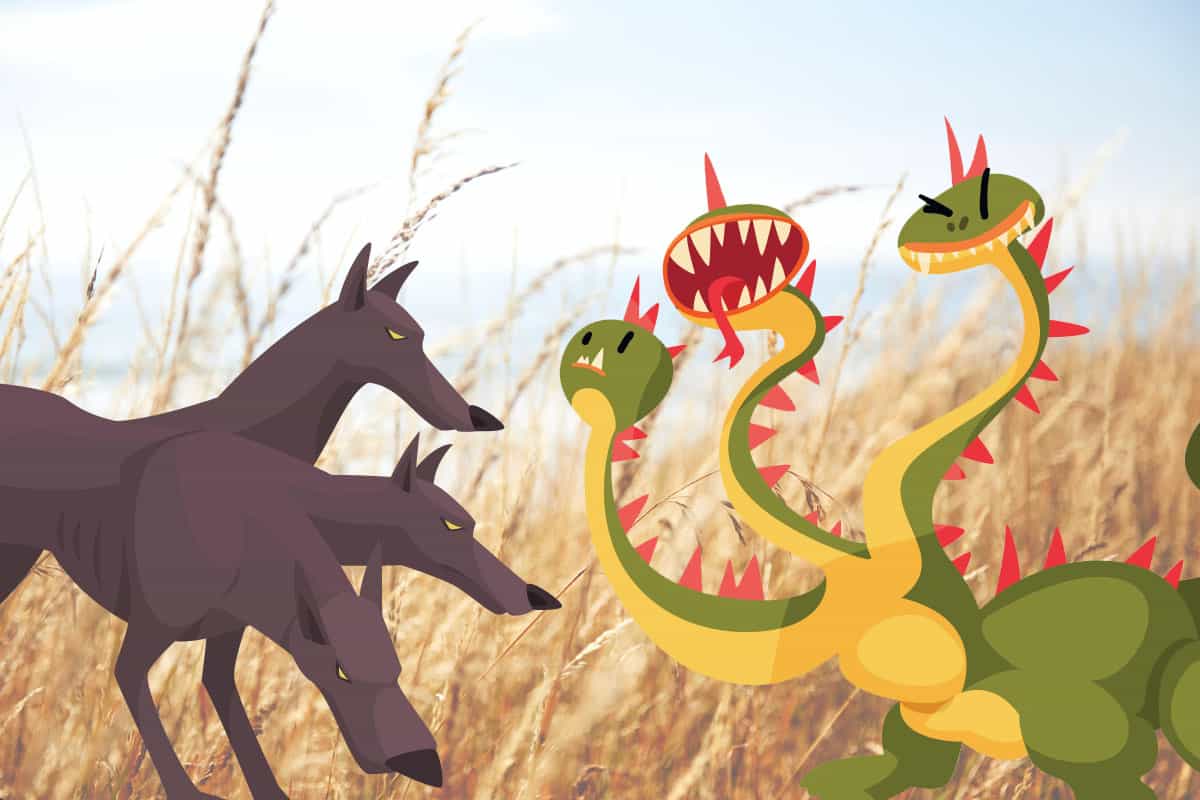 Two of the most famous monsters in Greek mythology, Hydra and Cerberus are seen as guardians of the Underworld, fiercely dangerous, and ultimately defeated by the same hero – Hercules. But where Cerberus is often depicted with his many heads as simply doing his job preventing souls from entering and exiting the Underworld by their own volition, Hydra is seen as much more fierce and likely to attack at will. In fact, some stories suggest that Hydra would occasionally leave his lair at Lake Lerna to attack and upset neighboring towns. Where Hydra also continues to be seen purely as a monster, some contemporary depictions of Cerberus do him more justice and offer him a more likeable nature.

As with most monster mythology, Cerberus and Hydra can always be used to create a fright and teach a lesson or two about what goes bump in the night.

So, What is the Difference between Cerberus and the Hydra, Really?

Cerberus and Hydra are brothers and the children of Typhon and Echidna. Typhon is believed to be the most ferocious and dangerous monster in Greek mythology. A giant, serpent-like beast, Typhon was both strong enough and arrogant enough to think he could take the throne from Zeus. The two fought a battle of epic proportion and had it not been for the aid of Zeus’s lightning bolts, Typhon might have won.

Echidna, often known as the Mother of Monsters, lived in relative isolation in a cave by the sea. She is often described as being the most beautiful woman from the waist up and a horrendously ugly, dangerous and venomous snake from the waist down.

In addition to birthing Cerberus and Hydra, the monster couple also produced Othrus, Chimera, and many of the other most notable and horrific monsters in Greek folklore.

Cerberus, the multi-headed dog that guards the gates to the Underworld according to Greek mythology, is, as one may expect, a rather ferocious creature. He is often shown with three heads although, like most things in folklore, that is not always the case. For example, in Hesiod’s description, the dog-like beast had fifty heads, a serpent’s tail, and the heads of snakes growing from his back. The poet Pindar contradicted Hesiod and said the hound of the Underworld had a hundred. Nonetheless, three seems to be the most common suggestion as shown by various drawings, paintings and other art forms. It could also be that three heads became the common depiction for more practical reasons than faith in the lore itself.

Running in theme with the number of heads debate, Hydra was a multi-headed serpent. How many heads it had depends on which source one draws their conclusion from. Alcaeus, a Greek poet dating back to 600 BCE, declared the hydra to have nine heads although earlier pieces of artwork depicted the hydra with six. Later poets suggested the hydra had fifty heads. There are many more poets who described Hydra but neglected to give an exact account of how many heads it had. Given the larger than life stature of the creature, its serpentine nature, the fact that its very breath was deadly poisonous and if you cut off one head two would grow in its place, the exact number of heads is probably an irrelevant figure.

Cerberus was known to devour anyone who attempted to escape Hades in a most ruthless fashion and refused entrance to any living creature trying to enter. But one hero discovered that music would charm the creature. In his heroic albeit fateful attempt at rescuing Eurdicyes from the Underworld, Orpheus had charmed Cerberus by playing his lute. This allowed him to pass into the depths of Hades’ realm.

Like his brother Cerberus, Hydra was believed to guard the entrance to the Underworld from the earthly side. Probably the most famous myth involving Hydra is of Hercules’ Twelve Labors. According to this myth, Hercules was attempting to atone for the sin of killing his own children. As directed by the Oracle of Delphi, he sought service under King Eurystheus, his own cousin. The second task King Eurystheus assigned Hercules was to kill Hydra.

Some suggest that the three heads of Cerberus represent the past, present, and future respectively. More specifically, they represent the most negative mindsets people often have in regard to time.

Others suggest he is symbolic of the importance of observation and being generally watchful. This makes sense given that within the Ancient Greek paradigm, it was far more important to keep souls in the Underworld than it was to keep them out of it. Cerberus had to remain ever-watchful to ensure that no one who got into the Underworld, got out. It may even be reasonable to go as far as saying he represents performing one’s duty. While some accounts do depict Cerberus as a violent and ferocious creature, others suggest he was relatively docile and even friendly provided that none try to escape. He is not inherently good or evil, he is simply doing his job.

At one point, Hydra may have symbolised immortality given that one of its many heads was thought to be immortal. Hercules did end up killing Hydra so this symbolism doesn’t hold much weight. Hydra could be noted as an obvious symbol of regeneration given its reproducing heads. Death could be another symbol as its lair in Lake Lerna was often thought of as the entrance into the Underworld.

At least within popular culture, one of the most famous contemporary examples of Cerberus is that of Fluffy, the three-headed dog tasked with guarding the sorcerer’s stone in Harry Potter and the Sorcerer’s Stone by J.K. Rowling. In line with the original mythology, the character Hermonie charmed an instrument to play Fluffy to sleep, allowing the three young wizards into the chambers where the stone was hidden.

Much like Cerberus, Hydra also takes a bit role within the Marvel Cinematic Universe and comics. But rather than appearing as a creature or character, it is the name and symbol of the fictional, Nazi-founded terrorist organization. It fell in line with their slogan “If a head is cut off, two more shall take its place”. On a more scientific front, Hydra also became the name for a genus of simple freshwater animals who fascinate scientists with their ability to regenerate.