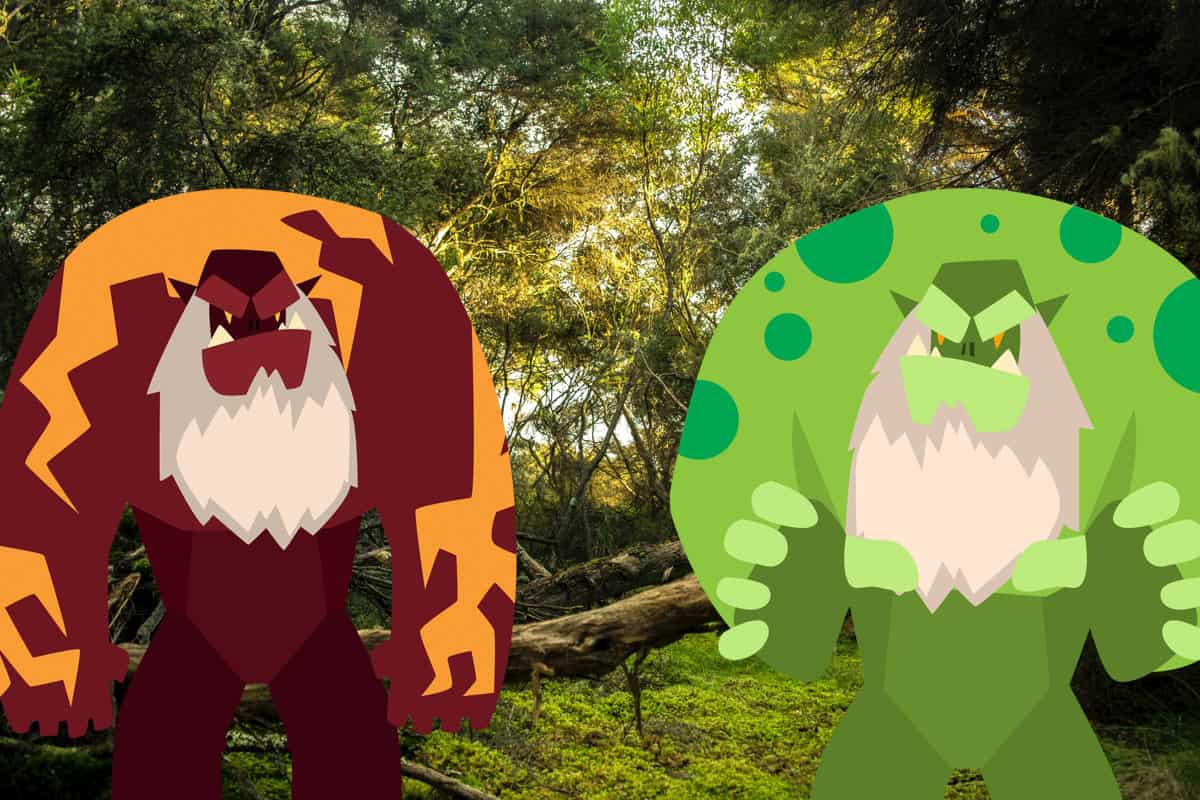 Ogres are dark, tall, usually ugly, and dimwitted creatures from myth who appear all over the world. Very similar to and sometimes versions of giants and trolls, and sharing their origin with orcs, ogres aren’t creatures to be trifled with!

Both in old and in more modern media, ogres have been a source of intense interest for writers of fantasy speculative fiction.

Usually they make a great villain, but in recent years they’ve often been more ambivalent – or even a hero now and then! The following are some of the most well-known ogres from stories across the world.

A Few of the More Famous Ogres from Myths and Legends

We can’t have an article about famous ogres without mentioning Shrek! This beloved disgusting creature with a Scottish accent and a bad attitude took many of the tropes of the traditional ogre and turned them on their heads.

While he was fairly disgusting in his habits, he behaved mostly like a human, using terror and aggression only to ensure his own peace and quiet. He even saved the princess rather than kidnapping her!

The eponymous booted cat tried to help his young master, a miller’s son, win the heart of a princess. After securing the romance between the two, the cat ran ahead, preparing things for his master, and challenged an ogre for his castle to complete the young man’s fortune. The ogre could shapeshift into any creature and turned into a lion to scare the cat. Puss used his greater wit and the ogre’s boastful nature to trick the ogre into changing into a mouse. When the ogre did so, Puss devoured him and gifted the castle to his master, who then married the princess.

Little Poucet and his brothers were abandoned in the woods by their poor woodcutter parents who could no longer afford to feed them. The first time, Little Poucet found their way back with white pebbles he’d dropped. The second, he used breadcrumbs, but the birds ate them. After that, Little Poucet lead his brothers deep into the woods until they found a house where they can stay safe for the night from wolves, but it belonged to an ogre.

The ogre tried to kill the boys in their sleep, but Little Poucet replaced the ogre’s daughter’s crowns with the boy’s bonnets, so the ogre killed his daughters instead before going back to bed. When the ogre woke up and realized that his daughters were dead and the boys were gone, he put on his magic shoes to chase after the boys. Little Poucet hid himself and his brothers in a small cave. The ogre sat to rest, and Little Poucet stole his magic boots. The boys ran off and made a fortune to take back to their parents, while the ogre was left with nothing and never found them again.

4. The Man-Eating Ogre [also Giant or Cyclops] (The Sinbad Cycle in One Thousand and One Nights, added c. 17th-18th century)

During the third voyage of Sinbad the sailor, he and his crew came across an extremely large human-like monster with sharp teeth, leather-black skin, and the claws of a lion. The monster attacked, devouring Sinbad’s crew beginning with the fat captain. Sinbad hatched a plan to blind the creature with its own roasting spits, and he and his men then built rafts to escape the island. As they leave, the ogre’s wife threw rocks after them, killing most of the other men, but Sinbad managed to escape.

The story is almost exactly taken from the story of Odysseus’s confrontation with Polyphemus the Cyclops in The Odyssey (c. 8th century BCE). Some versions of the original story also refer to Polyphemus and the other cyclopes as ogres.

The monstrous Grendel’s species is never actually identified in Beowulf, but he was likely a kind of ogre or giant. He was a descendant of Cain, spurned by God and man, feared by everyone in Herot except for the heroic Beowulf. The sound of singing from Herot’s mead-hall drove Grendel mad, so for twelve years he attacked every night and made the mead-hall unusable.

When Beowulf and his men arrived to take down the creature, Grendel devoured his first attacker with ease. His second attacker, though – Beowulf himself – was able to fight back. Without any weapon, armor, or help from others, Beowulf uses the strength of God to tear off Grendel’s arm and kill the ogre. Later, Beowulf also slayed Grendel’s terrifying ogress mother when she sought revenge.

The Beast in the tale was a selfish prince transformed into a monster by an enchantress after coldly rejecting her. In many versions of the tale, he is an ogre; something unlovable who can only be freed by true love. A long time later, a merchant accidentally stole a rose from his garden. The Beast said that either the merchant gave him the daughter, or he would kill the entire family.

The girl, Beauty, willingly came to live with the Beast. She grew to love the Beast as a friend as he gave her gifts and magic. Through conversations, she found him stupid, but not cruel. He asked her to sleep with him every night and she rejected him because she didn’t know how to love a beast.

Beauty went to visit her family and forgot her promise to return. The Beast died from shame, and Beauty returned to his side, apologizing, and proclaiming her love. He came back to life as a prince once more and they were happily married.

The broad definition of “ogre” allows writers, painters, and other creative types to adapt and explore concepts that might otherwise be hard to bring together. Servitude, darkness, cruelty, and loneliness – all of these are represented in unique ways that make the ogre a perfect figure for fantastic exploration.