Skip to content
Home » Gnomes vs Elves: What is the Difference? 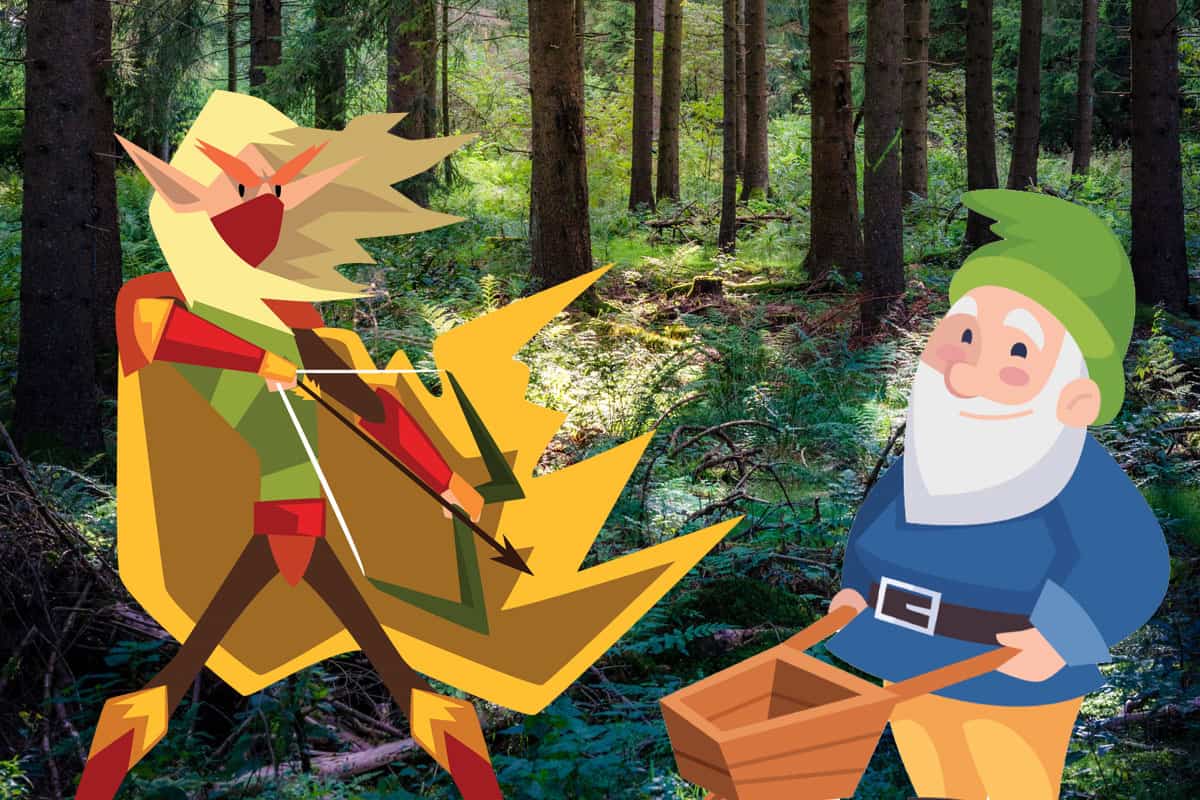 Gnomes and elves share a common mythology, and both were entities in early Nordic, Germanic, English, and Scandinavian cultures. However, elves and dwarves, the early gnomes, occupied two different realms entirely.

Although the gnome and the elf share many common origins, they are distinctly different mythological beings. Elves and gnomes are the opposite of each other in many ways, considering the elves’ light and the gnomes’ underground existence. Here are some of the main differences between those gnarly bearded folk and the shining elves of myth and legend.

What are the Differences Between Gnomes and Elves?

The mythological figure of a dwarf arose long before the ‘gnome’ made its appearance in its modern shape. The term dwarf stems from:

The idea of gnomes is strongly tied to Scandinavian folklore, where the tomte moved closer to human folk and became ground-dwelling creatures who protected the home and hearth. They became known as the:

These domesticated and sometimes capricious entities protected the homestead from harm. Some historians speculated that the gnome variation of the older Nordic dwarf myth was embraced by the isolated Scandinavian farmer who had to face the bitter cold and solitude of the dark months.

Although distinct from the mythological creatures called dwarves, much of the mythology of the Renaissance gnome shares features from the older Norse myths. Paracelsus, the Swiss physician, and philosopher introduced the gnome myth in the 16th century. Paracelsus coined the term gnome from the Latin gēnomos or ‘earth dweller.’

From Paracelsus, storytellers for the 16th century onwards adapted and changed the mythos to suit their narrative needs. Thus the dwarf’s origins as rulers of metals and mines moved from the mountains and bowels of the earth into a domestic role of household and farmstead guardians.

Some suggest that the gnome became associated with the beard, colorful clothing, and pointed hats in the Scandinavian myths. The depiction of the bearded gnome folk of Scandinavian legend is behind our modern representation of Santa Clause (less the diminutive stature.)

Modern fairytales have depicted gnomes as more of a faerie-like diminutive being who shares natural spaces with humans. The ubiquitous garden gnomes of today have taken on a life of their own, often traveling the world on adventures!

The elf is also a supernatural being in Germanic myth, Old English and Norse texts, and Scandinavian folklore. However, unlike the dwarves or later gnomes, they were beings of incredible beauty and light. Semantic scholars connect the word to the Latin root albus or white, which has its roots in the Indo-European root *h₂elbʰ, also associated with whiteness.

The 13th-century poet Snorri Sturluson called these magical beings of light called ljósalfar or light elves, compared to the dark elves or svartalfar thought to be a reference to the more grotesque dwarves who lived under the earth in darkness.

The term elf comes from these ancient dialects:

The elves occupied their magical realm called Alfheim, which humans could visit more often to their peril. Scandanavians worshiped elves during and before the Viking age. The most important ritual for elven worship occurred at the end of autumn. It was called Álfablót or ‘Elven Sacrifice,’ a closely guarded secret rite associated with ritual slaughter.

Old English myths abound with trips to Elphame or Elfland for ill-fated humans who suffered from the realm’s magic. More modern adaptations of the elven myth made elves more harmless and child-like sprites which could make themselves invisible and interfere with human affairs.

The Elve myth was still alive in the early modern period in Scotland and Scandinavia. Many ballads from the medieval era refer to the capricious nature of these small deities. They believed elves to be powerful beings, capable of both magically healing and striking humans with illness.

The Scots and Scandanavians also believed the elves to be exceptionally beautiful beings with unearthly powers of seduction, which they used to abduct mortals to their elven kingdom. Elves also had a reputation for stealing human babies and replacing them with elven stock called changelings.

As the Scots and English emigrated to America, they brought their elves with them, which we still see today in Christmas myths of popular culture.

Early elf myths depicted the deities as humanoid in appearance and of exceptional light and beauty. Distinctly human in appearance, mythological elves were typically white or shining and of divine appearance. Modern pointy ears are another fanciful addition of 19th-century Victorian literature, which adapted the elf and gnomes’ traditional archetypes.

Gnomes in their earliest form were grotesque, often twisted with lots of hair and a particularly unappealing physiognomy. Later, Scandinavian adaptations of the dwarf myth saw them clothed in bright color with the characteristic pointed cap and white beard.

Elves are powerful deities in myth with the power to inflict illness and diseases on those who cross them in any way. The ritual Álfablót or Elven sacrifice may have included the ritual slaughter of animals as often devotees would slaughter a bull to heal themselves from battle wounds.

In Germanic and Norse myth, elves could both inflict and heal illness and were immortal entities. The older magical powers of the elves far exceeded their earth dwelling dwarves and gnomes and included:

In their relation to the Nordic dwarf ancestors, Gnomes had strong links to poetry, scholarship, and the spoken word. Old Norse myth tells of the dwarves creating a mead of the blood of a god and honey that could turn anyone who drank it into a poet and orator. Other skills of early gnomes included:

Both mythical gnomes and elves shared a particular capricious nature, one quick to anger and exact revenge on those who offended them. While gnomes would exact their revenge by harming farmers’ livelihood, elves most often affiliated their enemies with disease through magic.

Gnomes interacted less with the lives of mortals and, being nocturnal, had little affairs with humans outside of their dwellings. On the other hand, Elves intermingled with humans in their daily lives, often mingling with them employing seduction.

Norse mythology depicts the romantic unions of a man and elf, whereas dwarves, the gnome’s ancestors, only abducted women by force or trickery. Much like the fairy tale Rumpelstiltskin we all grew up hearing.

Gnomes and elves are part of human history and have been part of our lives before the recorded word. Although they have changed over the centuries and assumed less powerful and forceful aspects, happily, they are still a point of fascination in our modern world. Despite their differences, gnomes and elves both occupy a special place in our original myths and early cultural heritage.