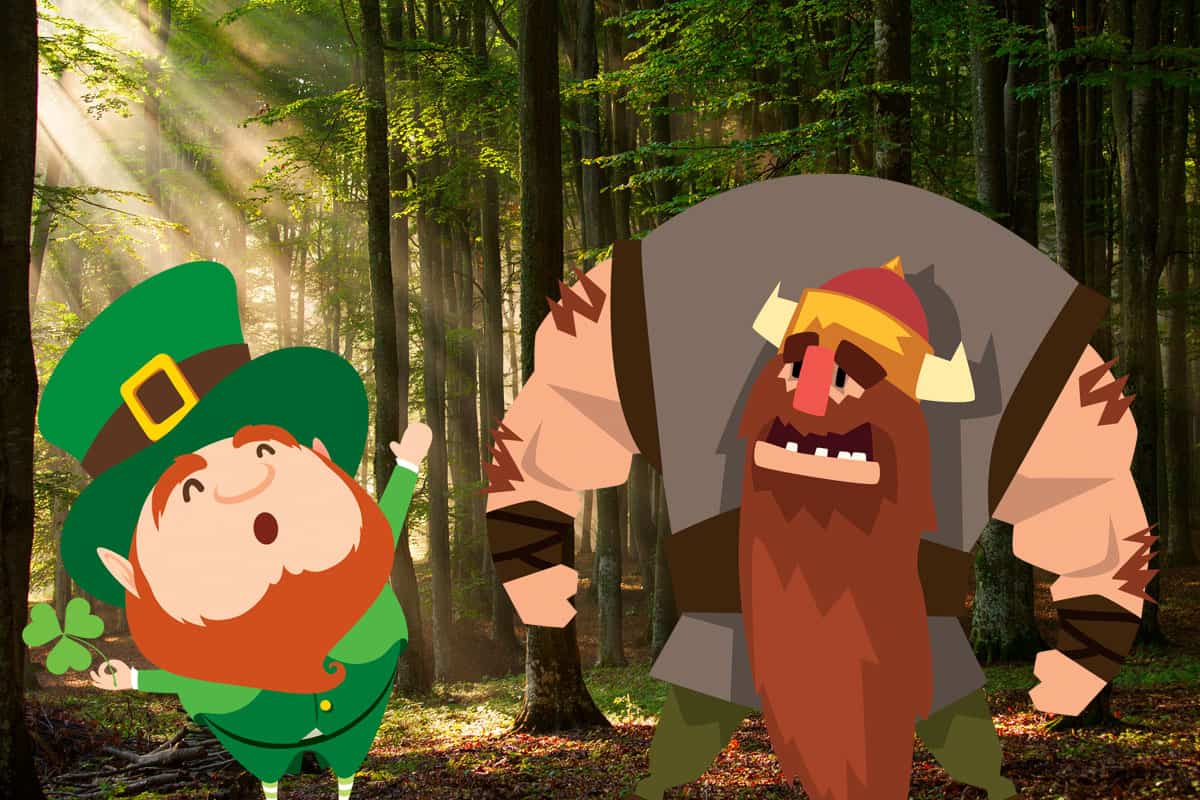 Leprechauns and dwarves. They’re referenced across the world as short, stouty men usually sporting impressive beards but what are the key differences between them?

Both Leprechauns and Dwarves are described as short men, their appearance, behaviour and habitats are very different. Leprechauns wear tailored clothing while the dwarves prefer more rugged or armored apparel. One lives among the trees and grasslands while the other dwells in the depth of the mountains. Both love a good drink but the dwarves are social creatures living in large groups where the leprechaun prefers his own company. The leprechaun has magical abilities where the dwarves’ talent lies in their craft.

If you are curious to learn more about these differences or how their behaviour is almost contrary to each other, read on.

What are the Differences Between Leprechauns and Dwarves?

The leprechaun is seen as a little bearded man. The rest of his appearance changed depending on which region you are referring to and the era. Their size varies from as tall as three feet to as little as half a foot. He is well known now for his trendy green coat, top hat and gold buckled shoes but originally, and still widely believed in Ireland, they in fact sported a red coat with a crooked hat. His red hair is also famous but originally no mention of hair colour was written. There are even drawings where there is no beard and he more resembles a small old elf.

Dwarves on the other hand have not had their appearance altered over the centuries. They are described as short stout men with long beards. Sometimes referred to as ugly or unappealing they have large arm muscles and a lot of bulk built up from years of smithing and mining. They are heavily connected to death earth, this is said to explain their dark hair and pale skin. Female dwarves are very rarely mentioned so their looks remain a mystery. Just like the leprechaun, dwarves are also recorded to be around three foot in height.

Leprechauns are found in the countryside of Ireland. They are solitary fairies that make their homes in hollow logs and trees. They often wander around the fields and forest foraging, communicating with other fae to acquire work as a cobbler, or finding humans to trick. This is the only time you will see them be social. There are no records of leprechauns communicating or living with each other.

The Dwarves live deep in the mountains often in caves and mines. They build underground cities of impressive stature for their size. Their forgeries for crafting armour and weapons are found in these underground estates where the dwarves live together in large groups. Due to their environment, it is said that they have excellent eyesight in the dark. Also somewhere hidden down in the depths it is said that they have a hoard of precious treasures that they accumulate containing gold, silver and jewels. This protective hoarding behaviour is very similar to that of the leprechaun who also protects his hidden stash of gold.

Leprechauns rarely appeared in any Irish mythology with their discoveries often recorded in old poems or scriptures. As such, the origin of these little creatures is somewhat of a mystery. Some have said they derived from water spirits, others from an evil spirit mating with a fairy. Records of leprechauns have only been found as of the 18th century but do not note their origin. Regardless, it is agreed upon that they are a type of fae. Interestingly, the leprechauns are actually a protected species under EU law.

Dwarves have mythological roots in a wide selection of countries with dwarf-like creatures being described in almost every continent. The dwarves we are most familiar with originated in the Indo-european mythologies, especially in the celtic and germanic legends. In norse myth they are worshipers of Thor, son of Odin and are referred to as dvergar.

— Leprechauns in mythology… and horror?

It is said that a leprechaun is a trickster that loves to play jokes and trick humans. He keeps his pot of gold hidden, sometimes at the end of a rainbow, and he is very protective of it. It is said that if you capture a leprechaun, he will show you where he hid his gold but will often succeed in tricking the human to look away so that he can disappear. It is also said that if you instead let him go, he will grant you three wishes.

In modern fiction, he’s character has changed significantly to both sides of the spectrum. On one side, the trickster is gone and he is a happy bubbly little bearded man, on the other, like in the horror franchise “Leprechaun” created by Mark Jones, the trickster side has evolved into sheer horror where a leprechaun will kill anyone who steals his gold.

— Dwarves in Mythology and Fiction

Their success as miners and smithing is well known. Intelligent, honorable and excellent tradesmen, they have built a lot of respect for others, even the gods, although it is noted that they also find the dwarves cunning, selfish and greedy. The dwarves have made many legendary artifacts including the spear Gungnir, the Draupnir of Odin and even Mjolnir, the famous hammer of Thor.
Interestingly, the plural of dwarf was generally accepted as dwarfs. This was recorded in the 17th century and the plural dwarves wasn’t recorded until the 18th century. Actually, it was none other than J.R.R Tolkien himself that changed the acceptance of the plural. After his book “The Hobbit” became a bestseller, the plural dwarves became the most accepted and this has not changed to this day. In modern literature, including Tolkien’s work, the dwarves are still great smiths that live in mountains but their character has changed to vary as much as human nature. Generally still a prideful race, their greed and selfishness depends on the individual. In general they are more known now to be hospital and merry folk enjoying celebrations and gatherings although the protection over their hoard remains.