Skip to content
Home » Gnomes vs Goblins: What is the Difference? 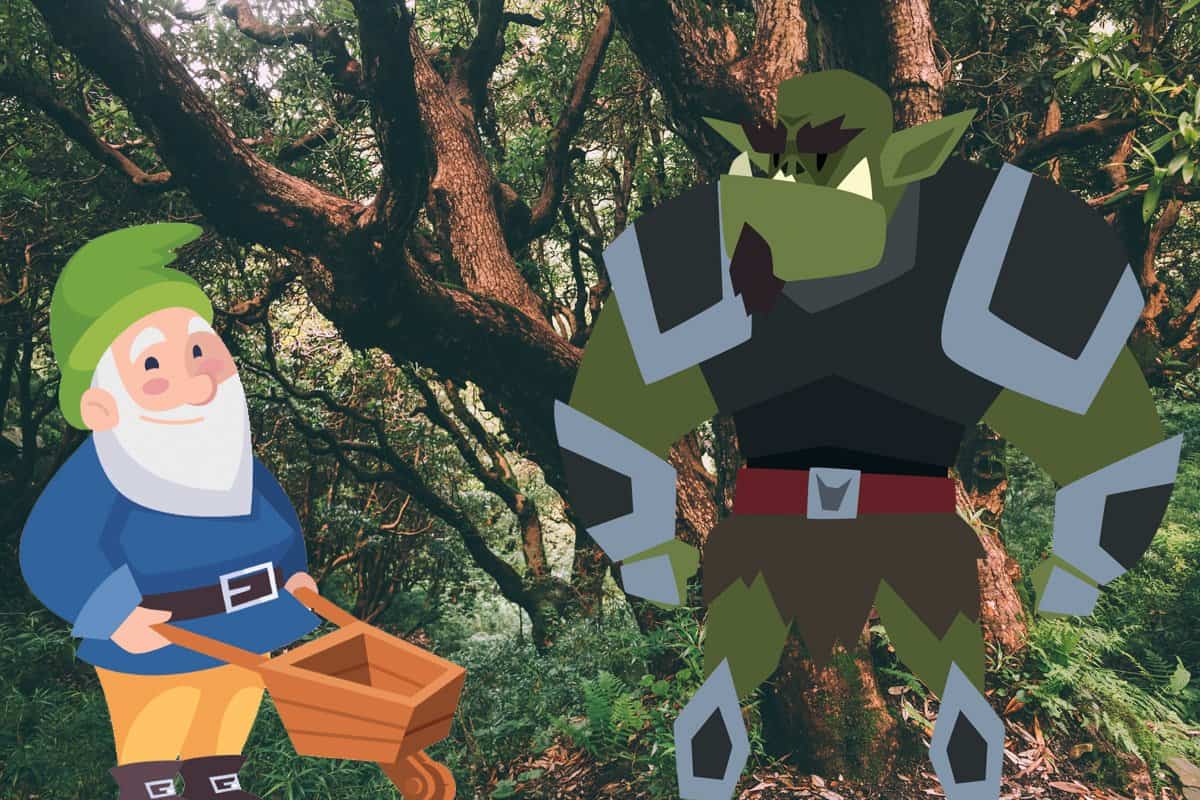 Gnomes and goblins both emerged in our shared cultural history and have evolved alongside humans from antiquity. However, gnomes and goblins couldn’t be more different. Gnomes are often helpful and protective entities, while goblins in their many forms are creatures of evil.

Gnomes differ from goblins in that they are often kind and helpful creatures that live among humans in harmony. Unlike gnomes, goblins are greedy and malicious creatures who prey on humans out of wickedness. Also, gnomes are bearded, diminutive folk, while goblins are ugly and jagged toothed.

Gnomes are a generally benevolent mythical race with love for animals and nature. Goblins have their roots in demonic lore and often plague humans just for sheer spite. Read on to discover some of the other main differences that set gnomes entirely apart from the savage race of goblins.

What is the Difference Between Goblins and Gnomes?

Goblins are rather monstrous creatures that emerged around the 14th century in several European cultures. Historians believe the etymology of the word goblin derives from the Old French “Gobelin” ‘and the medieval Latin gobelinus’ which referred to a devil/demon that supposedly haunted parts of 12th century Normandy.

The term goblin also stems from the Greek “Kabalos” and the Welsh “Coblyn,” a type of mine sprite in Welsh mythology. However, the goblin entity is far-reaching and has many variations, including:

The gnome myth stretches back into antiquity and stems from the Old Norse legend of ‘dverga.’ The early ancestors of the modern gnome myth were subterranean creatures with superhuman strength that lived underground. The dverga were skilled smiths and often forged magical items for the Old Norse gods.

Paracelsus, a 16th-century philosopher, first named the gnome, ostensibly from the Latin word genomus or ‘earth dweller.’ He described the gnome as two spans high and shy of human contact. They also had the power to move underground as easily as humans moved through the air.

The modern gnome myth has close ties to the Scandinavian Tomte and Norwegian Nisse. They were diminutive household entities with the powers to protect both farmers and their land and livestock.

The tomte moved from their mining origins and involved themselves in caring for animals and growing plants and crops. The tomte was a mischievous creature capable of helping their human hosts or playing tricks against them depending on the human’s behavior.

The modern gnome also hails back to the Germanic gartenzwerge or ‘garden gnomes,’ ceramic or wooden figures of small bearded men who farmers believed protected their crops and livestock from nighttime invasions.

The modern garden gnome is an adaptation of the early gartenzwerge, which became popular in Europe in the 1840s. Disney’s first animated Snow White and the Seven Dwarves in the 1930s boosted the garden gnomes’ dwindling popularity and gave our modern gnomes their more chubby-cheeked and comical appearance.

Goblins are a monstrous version of faerie that range from dwarf height to human height. Because the term goblin covers such a wide range of cultural myths, their appearance differs widely. However, they’re typically shorter than humans with a frightening visage, often bearing yellowed, crooked teeth.

Generally, the goblin has a frightening appearance despite them often being dwarf height. The Red Caps of British folklore wear a cap stained with their victim’s blood, while the Korean goblin called the Dokkaebi has only a single leg. The South African Tokoloshe has an enlarged penis that he throws over his shoulder when climbing sleeping women’s beds.

Gnomes have a more specific physical form than the broader term ‘goblin’ and are typically small, bearded entities spanning roughly three feet (91.44 cm) tall. They usually wear a conical red hat and a belted tunic in bright colors such as blue or red.

Typically a gnome has a smiling appearance, puffy cheeks, and a stout body. However, these gnome ideas are modern variations influenced by the media. The German and Scandinavian versions of the gnome were more of a wise man depiction with often serious expressions.

Unlike the modern gnome, which lost most of its magical powers over its evolution, the goblin still uses the magical arts. Goblins have special abilities, sometimes similar to a witch or warlock, and may even have demonic skills.

Often myth refers to these evil creatures with the power of invisibility and even the capacity to shapeshift into other creatures’ forms. Most goblins possess superhuman strength and may overpower a human easily.

Other powers attributed to goblins are:

Gnomes are strong, often several times stronger than their human counterparts. In its Germanic and Scandinavian heritage, the gnome had the power over plants and animals and could speak each language of the natural world.

Their protective powers over the home and garden stem from the Germanic gartenzwerg who prevented thieves from stealing crops and livestock. These early versions of garden gnomes could make their favored humans prosper and their harvests bountiful.

Other typical gnome powers include:

Unlike the often benevolent and helpful gnomes, the goblin is bad, whichever land you might find this folklore. Greedy, devious, and malicious goblins are there to take what they can from humans and often do.

Although they live in grottos and caves, they may attach themselves to human households. Like poltergeists, they may rap and knock on walls, move furniture, and pull the bedclothes off sleeping humans.

Some tales tell of goblins stealing horses to ride at night, hiding objects, and overturning pails of milk. At their worst, goblins can weave nightmares from gossamer and place them in the ear of sleeping humans. They may also steal babies and replace them with changelings.

Gnomes aren’t evil creatures and are often helpful and kind to their human hosts. The average gnome is shy of humans and often uses its powers to hide in plain sight. Gnomes are extremely hard working and spend night time fixing, mending, and taking care of plants and livestock if the human host is favored.

However, the modern gnome may turn peevish if overlooked, or humans make dramatic changes in their home or garden. Gnome revenge takes the form of pranks such as overturning receptacles, tying cows’ tails together, and hiding necessary objects from their human hosts.

If you had to accept the reality of a mythical being in your house, you’d be far better off with a gnome. If you treat them well and take care of your animals and garden, they’ll help you in many small but valuable ways. If you have a goblin, however, you best take care!